April 22, 2022
President Biden’s Earth Day executive order is a gift to our forests
By Jad Daley

It was a cold, damp Earth Day morning in Seattle’s Seward Park, but it was well worth the wait for the diverse group of tribal, corporate and non-governmental organization forest leaders gathered there. That’s because President Biden stood tall among the Park’s soaring trees and delivered an Earth Day gift to the nation that will ripple over decades. 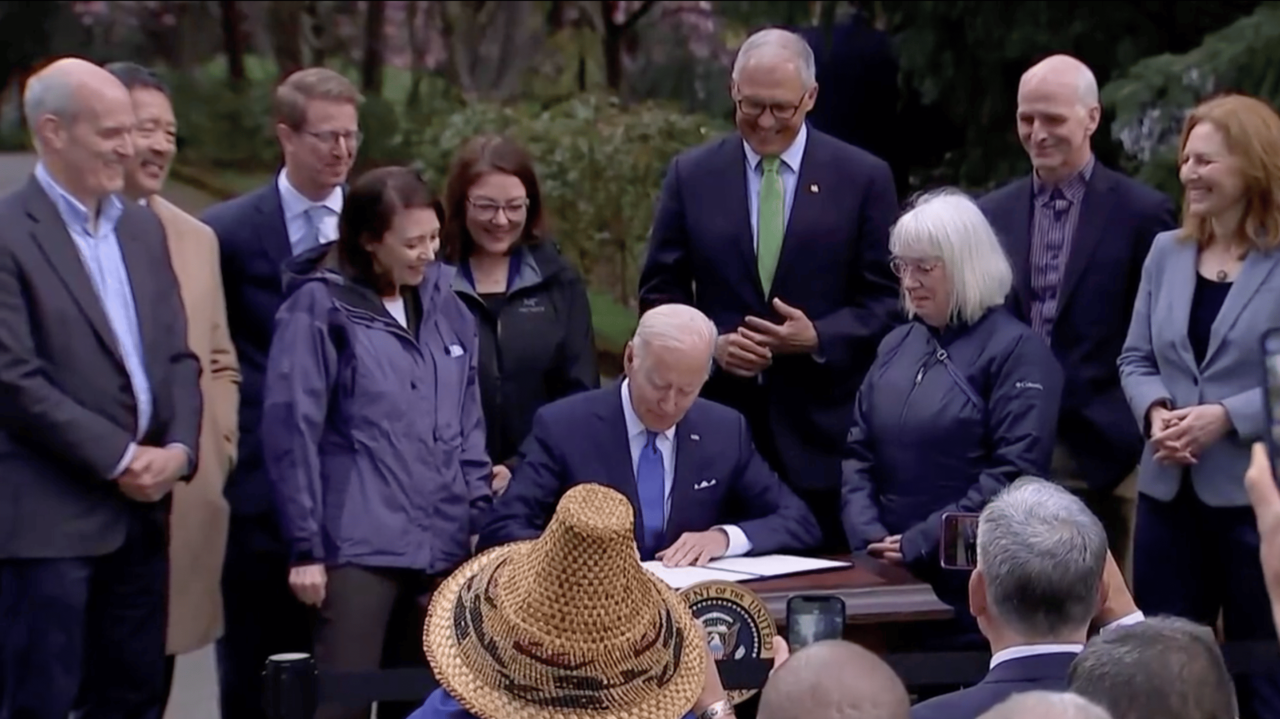 President Biden’s “Executive Order on Strengthening the Nation’s Forests, Communities, and Local Economies” recognizes the unique qualities of ancient forest landscapes and the critical role they play in removing carbon from our atmosphere and helping to slow climate change.
Photo Credit: NowThis

The Executive Order on Strengthening the Nation’s Forests, Communities, and Local Economies will put America’s federally owned forests fully to work on climate change, activating a vast area of land equal to roughly 30% of America’s forests. Even better, the Executive Order uses federal lands as the catalyst to increase natural climate solutions in all of America’s forests, including urban forests. With the window quickly closing for effective climate action, we need every bit of help our forests can provide.

That help is already considerable. America’s forests and forest products together capture and store 16 % of the nation’s annual carbon dioxide emissions. That is equal to the emissions from more than 162 million passenger vehicles! But this is not a floor, nor a ceiling. Carbon capture and storage in our forests is constantly changing in response to human actions and environmental stresses like drought, pests and wildfire that are rising dramatically thanks to climate change.

Just consider that in the past few decades, the extent of wildfire across the western U.S. has doubled, due in part to the way forests are being baked tinder dry. So dry, in fact, that in 2021, wildfire burned all the way up and over the Sierra Nevada mountain range for the first time ever. And then it happened again.

As a result, not even our ancient forests are safe. Iconic trees such as the Giant Sequoia are now succumbing to this onslaught — the 2020 Castle Fire in California, for example, destroyed between 7,500 and 10,600 sequoias with trunks larger than four feet. These old growth forests provide more than beautiful scenery and priceless habitat. One study of U.S. national forests across the West found that its most ancient trees, just 3% of the total, contain a stunning 42% of carbon stored in these forests. We must do everything possible to ensure their survival, protecting the carbon already stored in them, and additional carbon they will capture.

Saving our ancient old growth forests will take more than just exempting them from timber harvest. We must also manage these ecosystems to foster resilience in ways that might have been unlikely before, like using prescribed fire and thinning smaller diameter trees that grow up in their shadows, and ensuring that burned areas surrounding ancient groves are replanted for maximum wildfire resilience. Even wrapping the bases of these giant trees in fireproof foil blankets, in extreme cases. 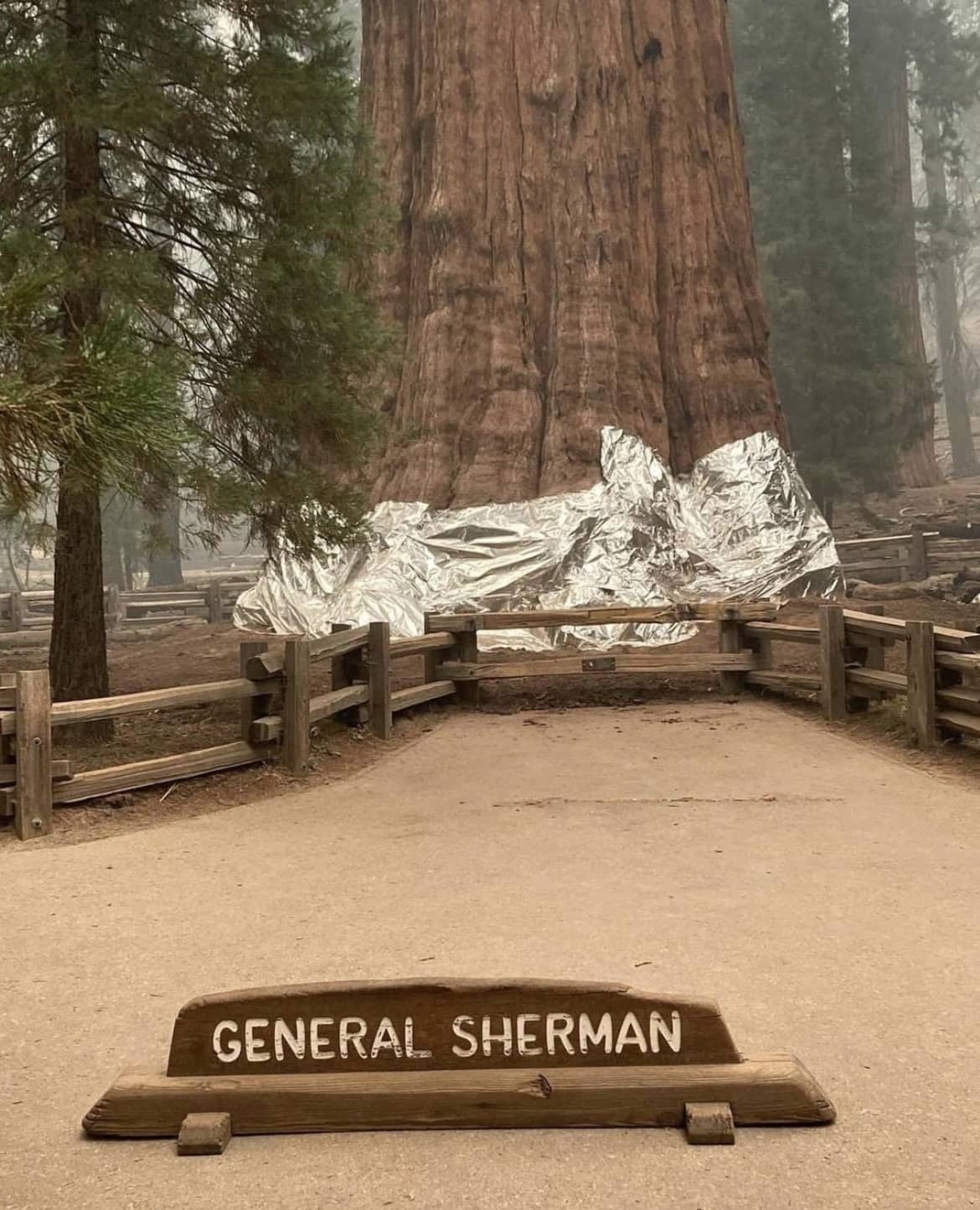 The Biden Executive Order leans into this challenge like never before. It starts by directing the first-ever assessment of old-growth and mature forests on federal lands, identifying where they exist, how they’re currently managed and the threats to their survival. This will then create the capacity to align the management designations of these high carbon forest areas to reflect their climate benefits as intact carbon sinks and to prioritize forestry treatments to these areas that will enhance their resilience to wildfire and other threats.

Protecting older forests is just the beginning. We need as many acres of forest as possible naturally capturing carbon, and that is where reforestation comes in. Our federal lands contain millions of acres that could be reforested, but agencies have not been keeping up due to funding limits and the increasing rate at which forests are being lost to catastrophic wildfire and other climate-fueled damage.

The tide is turning on reforestation, and President Biden’s Executive Order will help seal the deal. The infrastructure bill invested billions of dollars to help reforest federal lands, including the REPLANT Act, which removed the cap on the Reforestation Trust Fund, increasing U.S. Forest Service funding for reforestation from about $30 million per year to more than $250 million. Now we need to rapidly put those dollars to work using a climate-resilient mix of tree species and innovative planting techniques.

The Biden Executive Order directs federal agencies to set data-driven reforestation targets for 2030, so we can hold ourselves accountable to scale up quickly. It also addresses the greatest barrier to rapid reforestation by directing a new strategy for seed collection and tree nursery capacity that can meet our need to double (or more) seed and seedling supplies. This seed and seedling push will have benefits far beyond federal lands, because states, tribes, local governments and private landowners are also confronting huge shortfalls. The Executive Order directs federal agencies to coordinate with these partners to ensure increased seed and seedling supplies meet their needs.

But our need for more trees is not just limited to their capacity to sequester carbon. We also need trees to shelter us from climate change impacts — starting with extreme heat.

But our need for more trees is not just limited to their capacity to sequester carbon. We also need trees to shelter us from climate change impacts — starting with extreme heat. Heat kills 12,000 Americans per year, and this is projected to rise to 100,000 later this century. Trees are a potent natural defense, cooling neighborhoods as much as 22 degrees while also naturally scrubbing air pollution and carbon dioxide.

Unfortunately, lower income neighborhoods across America have 41% less tree cover, and communities of color have 33% less, as shown by American Forests’ Tree Equity Score. The Biden Executive Order tackles this issue by directing ramped up efforts to bring trees into high-need neighborhoods, helping to advance the goals of the administration’s Justice40 initiative. This push for urban forests can draw on existing federal programs such as the U.S. Forest Service Urban and Community Forestry Program, and emerging authorities like the U.S. Department of Transportation’s new Healthy Streets Program created by the infrastructure bill.

To capstone all of these actions, the Biden Executive Order directs the U.S. Global Change Research Program to conduct the first full federal assessment of the opportunity for natural climate solutions, going beyond trees and forests to include other natural systems such as wetlands. This will provide the broadest possible platform to guide future government action and investment and delivers on the President’s commitments made at COP 26 last fall.

While this was an Earth Day announcement, it is also a significant move for our economy. There is strong research showing that investment in ecosystem restoration and other natural climate solutions can produce as many as 40 jobs per $1 million invested. Even better, these opportunities will naturally occur in communities that need them the most, such as rural towns with long economic ties to the land and underserved urban neighborhoods. The new Civilian Climate Corps proposed in the President’s fiscal year 2023 budget would help ensure that the people who need these career opportunities the most can access them.

So happy Earth Day, America! With this bold move from President Biden, we have the full force of the federal government behind our forests as a natural solution to help reduce greenhouse gases, keep us safe, and build a more just economy. In complicated times with many competing demands, trees and forests offer the kind of multi-tasking solution that we need.