LIKE MOST HUNTERS in the Rio Grande Valley of Texas, Gisel Garza rises early and heads out to the forest in search of prey. But instead of deer, feral hogs or wild turkeys, Garza is looking for species like Barbados cherry, Texas ebony and fiddlewood.

Garza is a seed hunter. And even though the survival of the forests and their wildlife depends on her efforts, few people do what she does, and there are not enough seeds in nurseries. That’s a big problem.

Located where Texas’ Gulf Coast meets the border with Mexico, the Rio Grande Valley is characterized by dense, shrubby thornforests known as Tamaulipan thornscrub. These rugged-looking trees harbor a dazzling array of species — more than 1,200 plants, 530 birds and 300 butterflies, in addition to the United States’ only population of ocelots — an endangered species. The forests are threatened by development and climate change — only 10% of them remain.

“Overall, regardless of the level of difficulty when collecting seeds, it’s a very rewarding process, especially when we see the seeds that we collect planted and grown into seedlings that can be used for restoration of our thornforests.”
—Gisel Garza, Project Manager for the Rio Grade Valley, American Forests

Seedlings are desperately needed to restore the 85,000 acres of thornforest in the Valley that have been identified as a high priority for reforestation. It would take 85 million seedlings to reforest that many acres, a number that would take 166 years to grow at the current rate of production among nurseries.

At the national level, the seed shortage is even more dire. A 2021 study co-led by American Forests concluded that meeting national reforestation goals of 64 million acres by 2040 would require increasing the number of seedlings produced each year by 1.7 billion — a 2.3-fold increase from current production levels. For that reason, American Forests sees the Rio Grande Valley seed collection work as a pilot project in what will hopefully be a national model for addressing the seedling shortage.

So Garza spends her days traveling the Valley’s backroads scouting for seeds ripe for harvesting. She’s looking for about 30 types of flowering trees and shrubs, including Wright’s acacia, Texas persimmon, snake eyes and guayacan (soap bush). She travels among the trees on foot or sometimes — to reach those high branches — uses the back of her trusty Ford pickup.

She usually collects on protected federal lands, helping to meet the U.S. Fish and Wildlife Service’s regional seed-collection goals, but more recently has also begun working with private landowners interested in conservation. She has also teamed up with the State of Texas to collect on state-owned lands. Garza takes the seeds she collects to the Fish and Wildlife Service nursery in Alamo, Texas, where she processes them for storage until the next year’s planting season. It’s essential to remove the pulp, or separate the seeds from their pods, and then store them at the right temperature and moisture conditions. If the collection location is too far away from Alamo, she will sometimes process them at home before transporting them to the nursery. 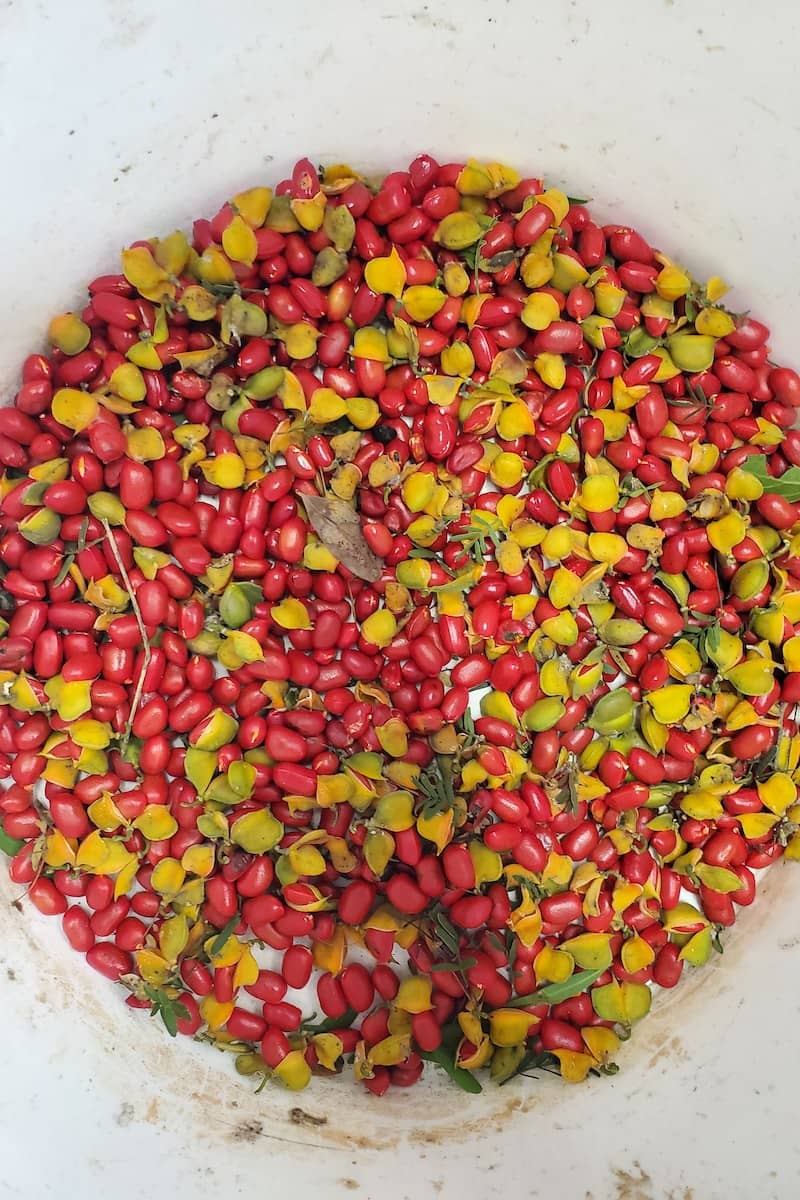 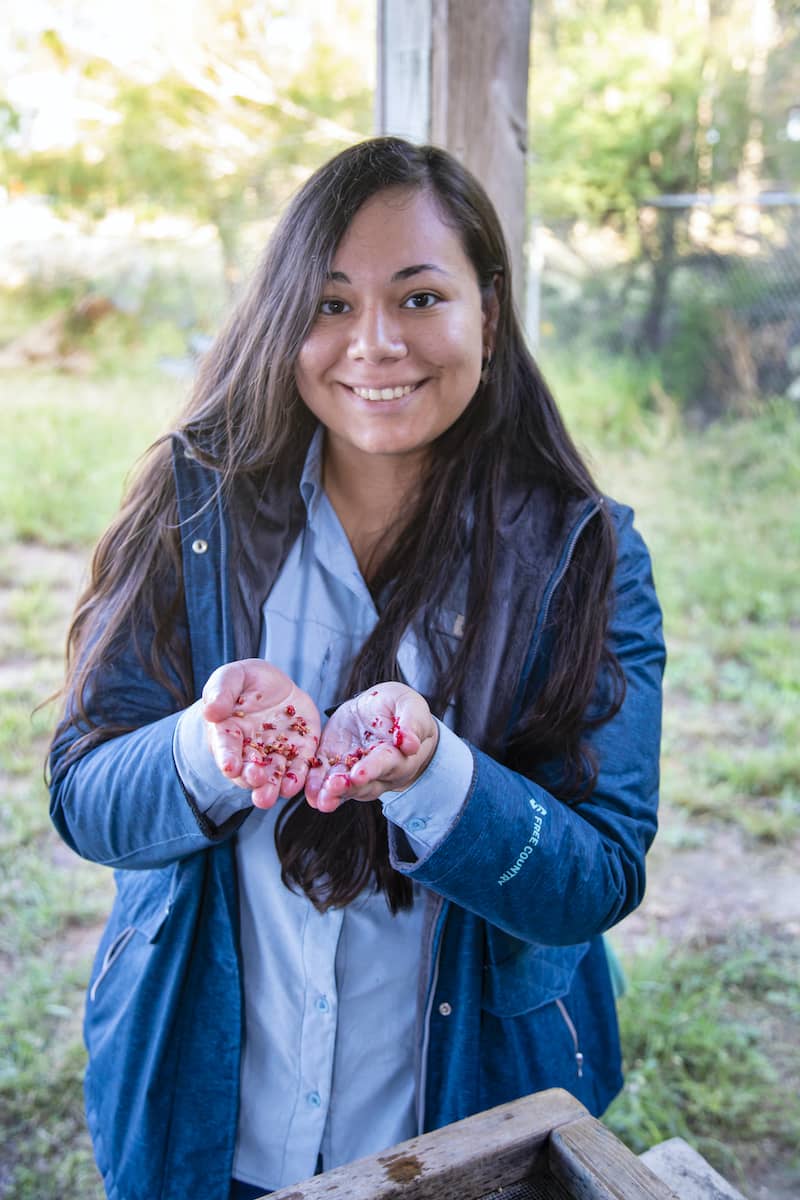 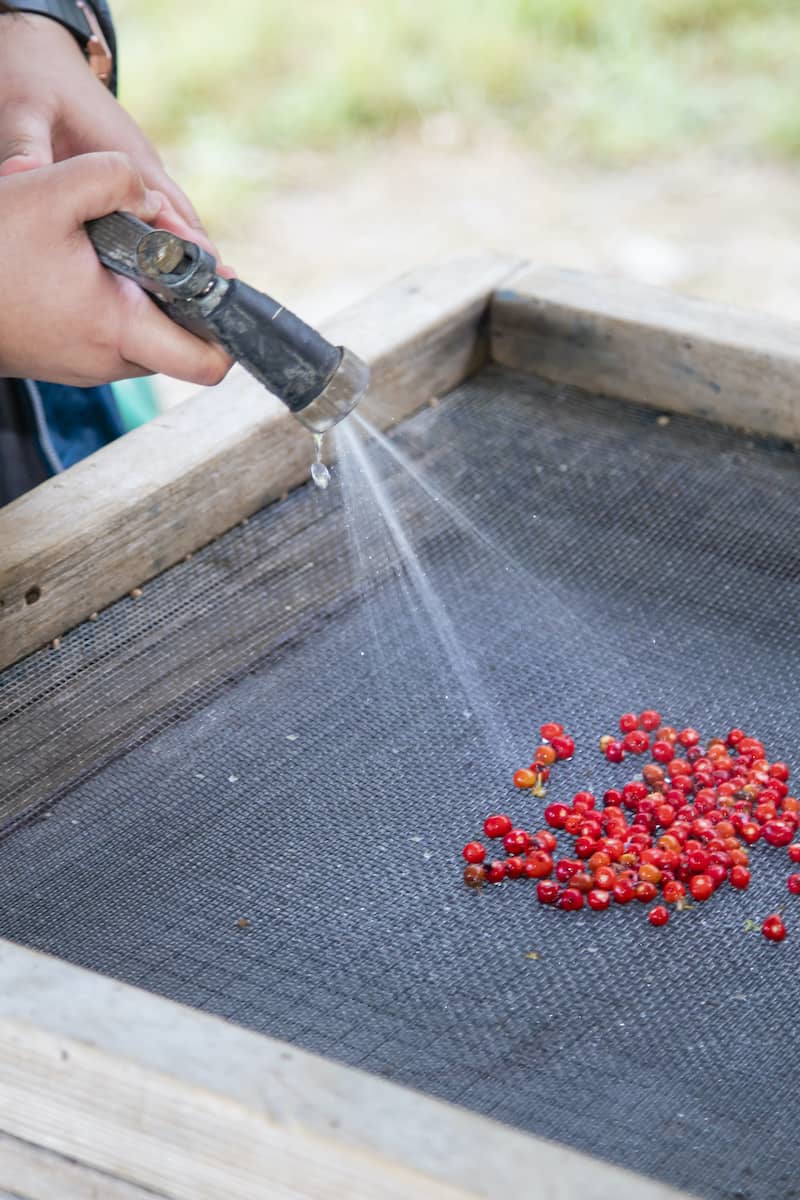 Harvesting seeds, such as these Manzanita (Barbados cherry) seeds, is the beginning of a long process. They need to be washed, have the surrounding pulp removed, and dried prior to storage.
Photo Credit: Larry Ditto / American Forests

Before any of that work takes place, Garza seeks out potential collection locations with the goal of finding as many different parent plants as possible to increase genetic diversity. Understanding the phenology — or life cycle — of specific plants in relation to how they are influenced by climate variations over time is critical to this work.

“An essential step before collecting seeds is to scout for plants that we could potentially collect from in the future and document their phenology,” she says. “If we know for example that certain species are producing flowers at a certain time, then we can follow up with these plants to see if they produce fruits.”

Garza’s ties to the Rio Grande Valley are deep — she was born and raised here and is passionate about saving it for future generations. She joined American Forests in June after completing her master’s degree in biology at the University of Texas Rio Grande Valley, where she researched plant pathology, endangered plant conservation and climate change modeling.

Her connection to the area gives her a passion for the work, even though it can be hard due to harsh weather extremes or thorny species like Wright’s acacia: “Overall, regardless of the level of difficulty when collecting seeds, it’s a very rewarding process, especially when we see the seeds that we collect planted and grown into seedlings that can be used for restoration of our thornforests.”

The University of Texas Rio Grande Valley is a partner in the seed-collection project that includes American Forests and the Fish and Wildlife Service. The university hosts a research training component called “Empowering Future Agricultural Scientists” that gives undergraduates field and lab experience related to food security, the environment and climate change. 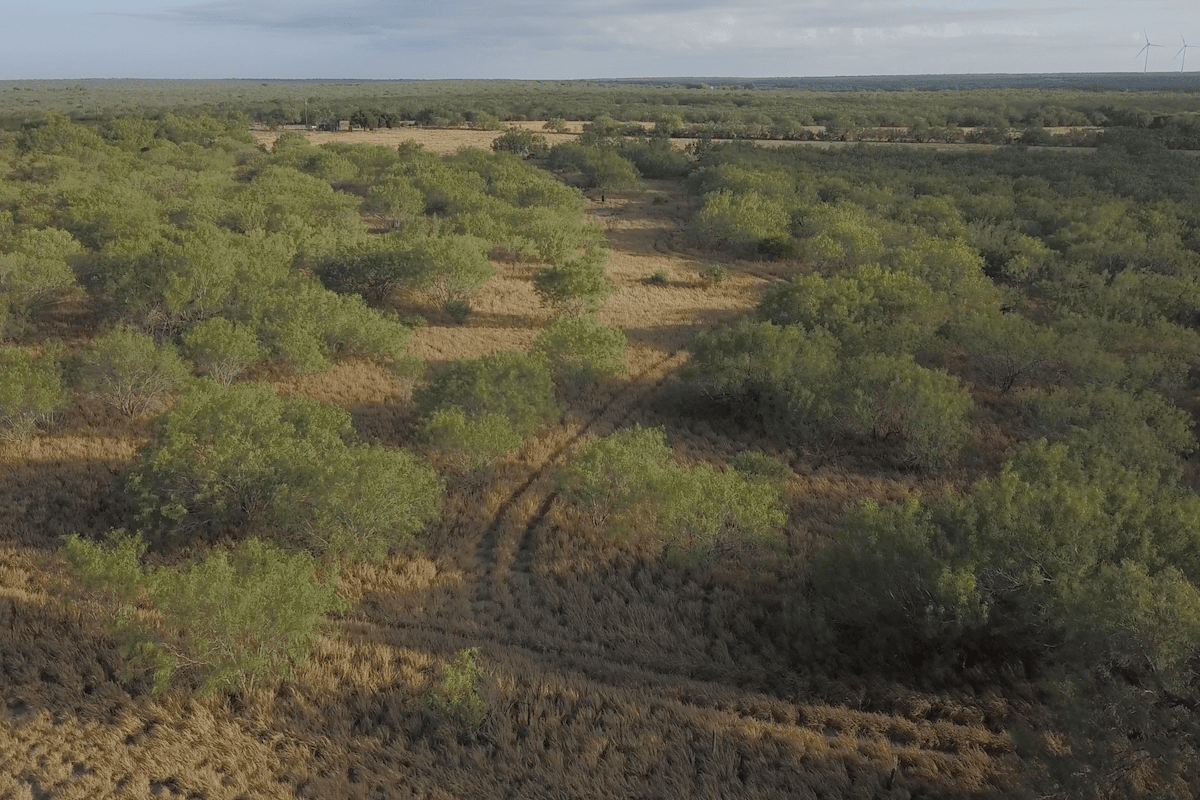 With only 10% remaining, the Rio Grande Valley’s thornforests are increasingly threatened by development and climate change. Over the past 22 years, American Forests has planted more than 2 million thornforest trees and other native plants across more than 4,000 acres of former agricultural land.
Photo Credit: James Foguth, Digital Development Communications / American Forests 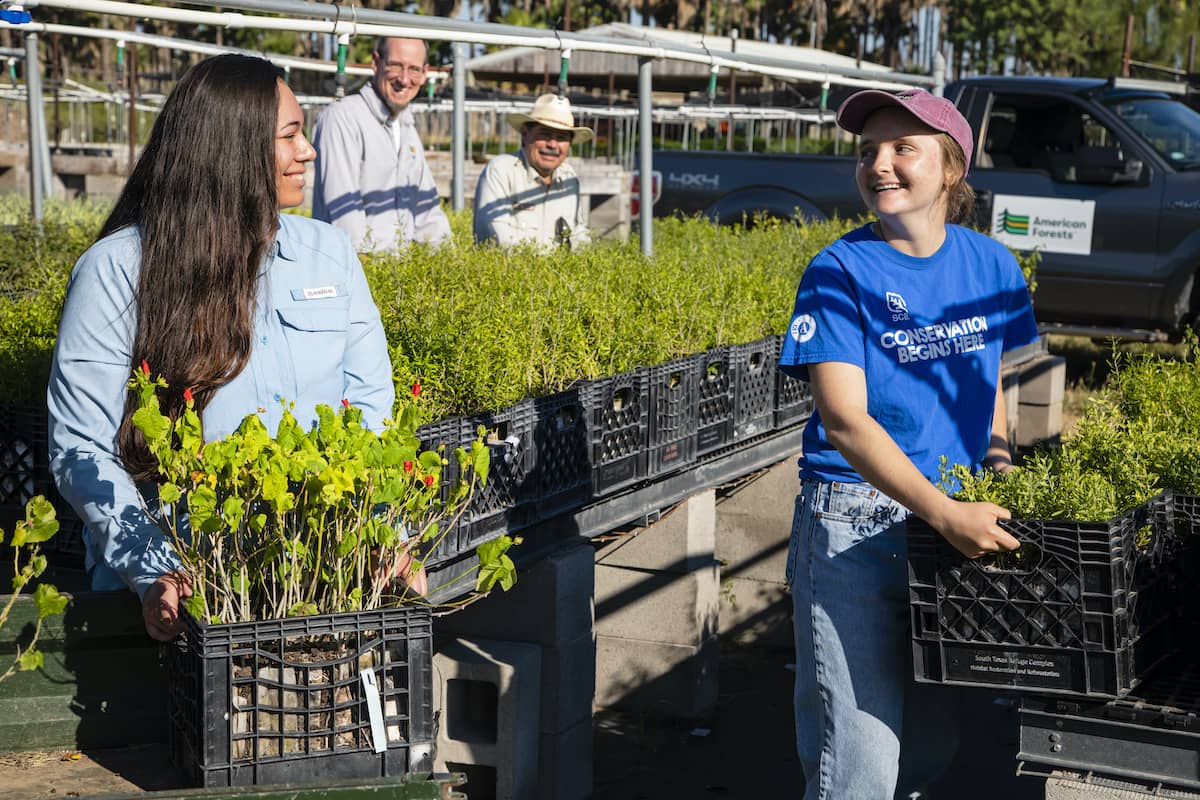 Garza and Chrissa Browder-Long with the Student Conservation Association load seedlings at the Marinoff Nursery in Alamo, Texas. Looking on are Mitch Sternberg (left) and Rene Ruiz (right) of the Fish and Wildlife Service, which runs the nursery.
Photo Credit: Larry Ditto / American Forests

Brian Kittler, American Forests’ senior director of forest restoration, sees huge potential in scaling up the Rio Grande Valley seed-collection project. He envisions a “Seed Collection Corps” that will deploy seed hunters in priority locations around the country. One of those is the Western U.S., where record-breaking fires and climate change-induced drought have left states, such as California, Oregon and Washington, with vast landscapes needing reforestation and little-to-no seed available to do this.

California, for example, is facing a potentially catastrophic shortage of seeds and collectors. Only a handful of contractors in California collect pine cones, and a recent spatial analysis from CAL FIRE indicates there aren’t nearly enough cone seeds to reforest recent burn scars. To reforest just 25% of private, non-industrial forests that have recently burned, the state needs to collect over 69,000 bushels of cones. At the current rate of collection, it will take almost 200 years for that amount of seed to be gathered. But, as Kittler says, “They don’t have the people to collect the seed, and cone quality is increasingly variable and infrequent.”

Further north in southcentral Oregon’s Fremont-Winema National Forest, the prolonged drought and ongoing climate change have reduced seed production in forests to near zero. The last large cone collection was 35 years ago, and recent fires have burned more than 643,000 acres, which are unlikely to regenerate naturally.

“If you don’t have the seeds, there’s no restoration efforts, so by having Gisel out there doing the seed collection, we’re meeting that challenge head on.”
—Brian Kittler, Senior Director of Forest Restoration, American Forests

“We are losing seed sources,” Kittler says. “The scale of these forest fires means they are burning or nearly burning critical seed sources for entire seed zones.”

The good news is that Kittler and his team are working on a long-term strategy to address this shortage — of both seeds and the people to collect them — with a goal of dramatically increasing the awareness and potential solutions around the issue nationwide. Currently, American Forests has six seed-collection agreements in four states — Texas, Idaho, Montana and California — with plans to develop a much broader strategy. And in Texas, Kittler notes, the organization has also partnered with the Fish and Wildlife Service to seek out and boost supplies of climate-resilient seeds.

Congress has also addressed the shortage, primarily through the REPLANT Act, a part of the bipartisan Infrastructure Investment and Jobs Act that lifts the cap on the Forest Service’s Reforestation Trust Fund. The infrastructure bill also earmarks $200 million in funding to bolster the National Seed Strategy for Rehabilitation and Restoration managed by federal land agencies. One proposed solution to address a shortage of seed collectors is a revival of the Civilian Conservation Corps, which employed 3 million people during the Great Depression to plant trees, build trails and pursue other outdoor vocations. 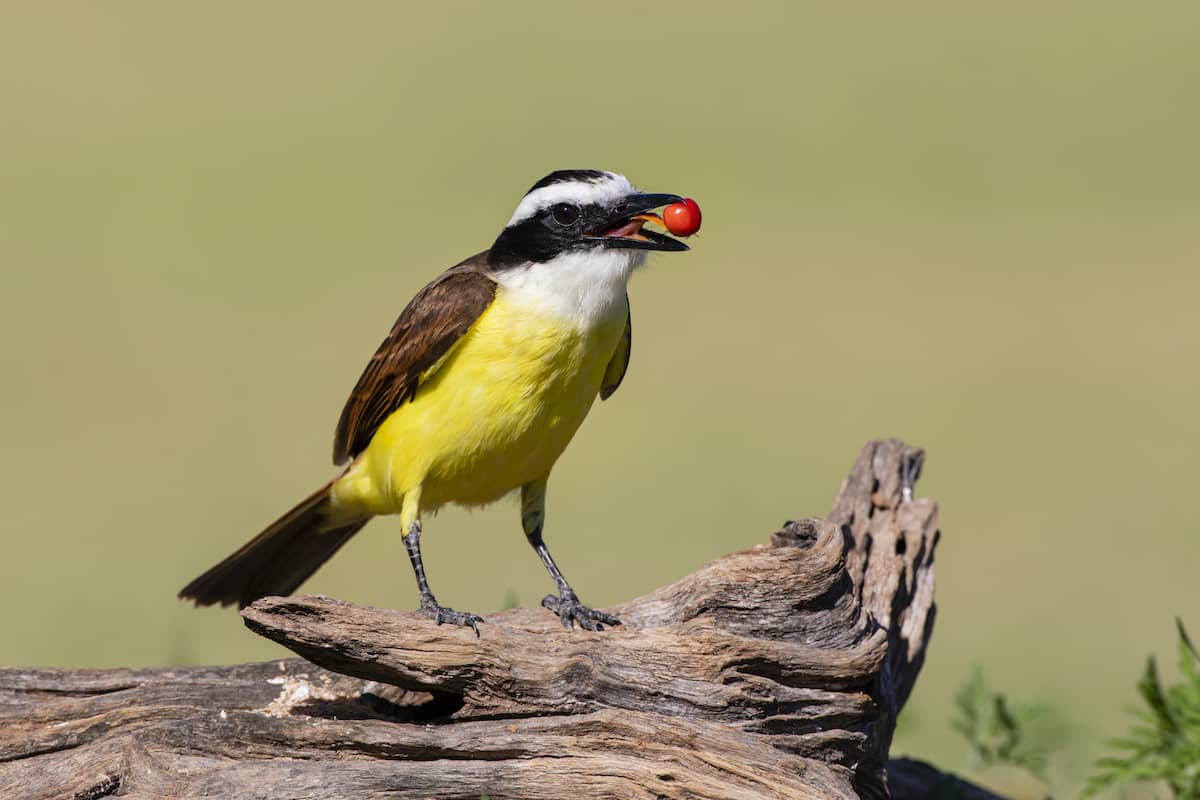 A great kiskadee eating Manzanita (Barbados Cherry) fruit. When seeds pass through the bird and fall into the soil, they sprout and help restore the Tamaulipan thornforest.
Photo Credit: Larry Ditto / American Forests

Kittler sees seed collection as the foundation of the conservation plan in the Rio Grande Valley and anywhere else that restoration is taking place. “If you don’t have the seeds, there’s no restoration efforts, so by having Gisel out there doing the seed collection, we’re meeting that challenge head on,” he says.

Garza agrees, and points out why, even in the face of daunting challenges, her job is so meaningful: “I’ve grown up seeing forested areas torn down, so it means a lot to be able to help conserve the areas that remain and potentially plant areas that have been lost here in the Valley.”

Lee Poston is a communications advisor who works with mission-driven organizations and writes from University Park, Md.