My husband recently gave me a t-shirt that says “May the forest be with you!” For any “Star Wars” fans out there, you probably know this is a spinoff of the famous greeting “may the force be with you” that Jedi knights say to one another when facing danger. Ironically, this phrase is actually a very appropriate greeting for our planet earth, which is facing grave danger from the threat of deforestation and climate change.

I started to think about these twin threats seriously when I ran across an excellent American Forests article by Tyler Williams a few years ago about the decline of the aspen tree in a changing climate. As Williams pointed out, the aspen tree is one of a select group of trees known as “circumglobal super species” because of their ability to span continents in similar forms. In fact, the aspen is one of the most adaptable tree species and is the most widely distributed tree in North America. Moreover, a famous 108-acre stand of aspens in Utah called ‘Pando’ is known to be both the largest and longest-lived organisms on earth. Yet, like the Jedi knights, the aspens (including Pando) are dying out, succumbing to the dark forces of global warming, drought, insects and disease.

Climate scientists around the world agree that 2015 was the hottest year on record since record keeping began in 1880, and the 10 warmest years have come in the past 12 years. Even worse, the planet had its biggest temperature leap in modern history just last month, a fact that did not escape the attention of several influential climate scientists, such as Gavin Schmidt, who directs NASA’s Goddard Institute for Space Studies.

I believe that deforestation and global warming are inextricably linked with disastrous long-term effects. Scientists generally agree that greenhouse gas (GHG) emissions are a major cause of global warming, and deforestation is said to account for up to one-fifth of global GHG emissions directly. In their natural state, forests act as a carbon sink, absorbing carbon dioxide. It’s estimated that one hectare of forest can absorb 10-20 tons of carbon dioxide (or 4-8 tons per acre) per year. To put this in more relevant terms, one acre of forest can absorb enough carbon dioxide over one year to equal the amount produced by a car driven 26,000 miles. However, cutting forests down not only neutralizes this positive effect, it also releases more carbon dioxide into the atmosphere. Scientists estimate that tropical deforestation releases between 1.5 billion to 3 billion tons of carbon dioxide into the atmosphere each year.

However, if we were to take into account all of the reasons why trees are cut down in support of human activity (e.g. agriculture, fuel production, paper/pulp/wood industries, urbanization and economic development), cutting trees down could actually account for up to 50-75 percent of GHG emissions. For poor countries, in particular, the near-term economic gain of cutting their forests down is valued over conservation to avoid long-term costs in the future.

Consider these statistics about the loss of our forests:

Because the problem of global warming is so large and complex, there is no simple solution. However, given that greenhouse gas emissions are a major cause, reducing the planet’s carbon footprint is a good place to start. Like enterprises, the scientists and agencies charged with protecting our planet are faced with challenges of numerous and variable data sources, incomplete data and the ongoing task of harnessing enormous volumes of data to make better decisions.

Here are three ways analytical insights and technology can help:

Governments and organizations are beginning to put economic incentives and penalties in place to help slow deforestation and global GHG emissions. For example, REDD+ is an international incentive strategy where tropical nations would reduce deforestation and be compensated by wealthy nations for any resulting economic loss. Carbon taxes, such as the proposed US Federal Carbon tax, and environmental tariffs are on the other side of the spectrum.

However, designing and implementing economic policies that will have a measurable impact is complex due to the number of factors and data sources involved. For example, will the policy put in place have the intended effect if another economic incentive counteracts it? Which data is the right data to consider for shaping strategy and policy decisions? What technology and tools should be used?

As global economies continue to grow more interconnected and interdependent, where a tree being cut down in the Amazon could have economic repercussions in Alaska, governments are going to need strong data leaders on their team with the ability to mobilize their organizations around the right data-driven decisions and strategy.

Solving big problems requires a lot of brainpower, perhaps more than we have ever had before. Global warming, for example, is an enormous data problem with many overlapping and changing data sources such as different industries, economic development, crime, urbanization, energy use, agricultural activity, waste and pollution. There are also cause and effect patterns that need to be discovered to enable decision makers to focus on the right mitigation areas.

That’s where cognitive computing comes in, allowing us to learn and discover insights from large data sets to solve grand challenges like healthcare, education and water and sanitation in Africa. What if this deep thinking ability were applied to a big problem like global warming by examining one of its chief sources – deforestation? Global Forest Watch aims to do just that by combining satellite imagery, crowd-sourcing and predictive data learning and artificial intelligence to predict deforestation before it happens. Just like businesses that are being transformed by machine learning and cognitive computing, governments and non-governmental organizations in charge of forest lands will be able to overcome big challenges such as inconsistent data sources and definitions and lack of data transparency to uncover insights that were previously difficult to pinpoint and manage.

Prediction is only half the battle — governments must also be able to enforce conservation policies and prevent crime. However, that can be costly for countries with large forest regions to manage, especially since loggers are devising new tactics to avoid satellite detection. That’s where smart drones flying over large swaths of forest could help prevent crime before it happens. These drones would need to be smart devices that rangers could manage remotely to monitor and track illegal activity. This type of connected smart drone system could enable fewer rangers to manage larger areas of forestland more effectively.

As governments become more successful in pulling all these factors together into stronger policies in support of conservation, it will accelerate the transformation that the energy and utilities industry is already facing. Fossil fuels currently provide about 85 percent of all energy use worldwide, but these traditional energy sources will only last another 50-100 years. Phasing out fossil fuels (a significant source of both deforestation and GHG emissions) quickly and moving toward renewable energy sources such as solar and wind would be a big step in the right direction.

Fossil fuels are also rapidly losing their cost advantage, and the share of renewable energy in global power generation is expected to rise to more than 26 percent by 2020. One of the biggest barriers, however, is the investment needed to replace aging infrastructure with new power plants. Building Internet of Things (IoT) intelligence into the new power plant designs, such as smart grids and smart meters, can help utilities recuperate those investments faster with improved operational performance, reduced costs, lower supply chain risks and real-time asset monitoring and predictive maintenance for fewer outages over time. 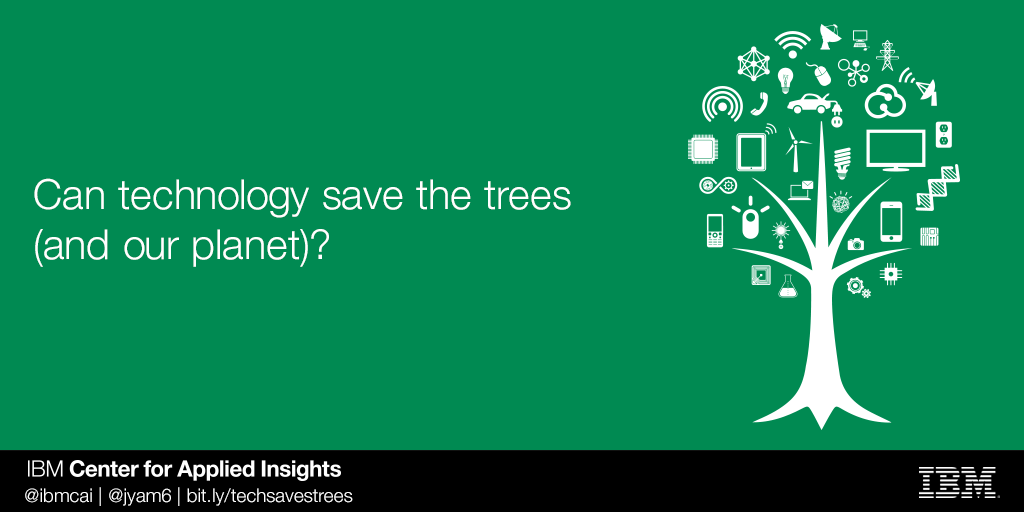 Even focusing on only one of the sources (deforestation) of a major global problem (climate change) is a massive challenge with multiple layers of interconnection, data sets, relationships and groups that play out across the world. Shifting policy makers towards making the right data-driven decisions for our planet’s future will depend on strong data leadership, backed by cognitive computing, with the ability to learn what patterns to look for.

Putting intelligent networks of connected smart devices in place to help implement, monitor and enforce these policies will also be key. A smart network of that scale that can continually help detect and prevent problems before they happen may also take computing power beyond what is available today. Quantum computers could provide the horsepower needed to bring the race to the finish line. Quantum computers promise exponentially more speed and power than what is attainable by traditional computers today, and they have the potential to impact problems on a global scale.

Want to be part of the solution and help save the forests (and our planet)?

IBM has pledged $5 million in prizes to the three teams that use cognitive computing to make the biggest breakthroughs on some of the world’s biggest challenges.So, why not go for the prize while saving our planet at the same time?If you do, drop me a comment @jyam6 on Twitter – would love to hear about it!

Or, help by planting trees through American Forests!