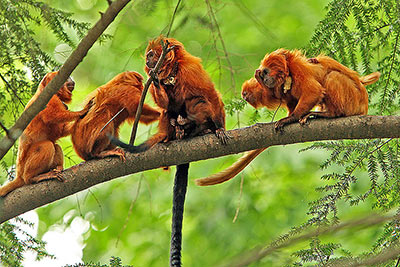 With the 2016 Summer Olympic Games now in full swing, some horrific environmental problems plaguing Rio de Janeiro and the rest of Brazil have been brought to light. Aquatic athletes are swimming through raw sewage and being exposed to antibiotic-resistant super bacteria, competitors and visitors risk being exposed to Zika-carrying mosquitoes, rare forests have been cut down to create the golf course and an endangered jaguar was shot and killed during the torch passing ceremony.

The Olympics are just now shedding some international light on these issues, but deforestation and environmental degradation have plagued the country for decades. Last year alone, 50 environmental activists were confirmed to have been murdered in Brazil, and illegal logging and intentional wildfires have rapidly destroyed its rare ecosystems. Throughout the environmental damage and upheaval, American Forests has been working to restore forests and help mitigate some of the environmental damage in Brazil.

Back in 2003, American Forests began a partnership with Pro-Natura and the Carrapeta Farm Hotel to restore northern Rio de Janeiro watersheds and agricultural land back into rich Atlantic Forest, the same type of rare ecosystem that was deforested to create the Olympic golf course. This biodiverse area used to cover 120 million hectares (that’s twice the size of Texas!), but has now shrunk to 10 million hectares fragmented into sections, making it difficult for wildlife to find sufficient habitat. The reforestation project in northern Rio de Janeiro sought to replant valuable sections of this forest that would improve watersheds, mitigate erosion and improve wildlife habitats.

Then in 2014, American Forests returned to the Rio area to further address the loss of Atlantic forest habitat in partnership with Associacao Mico-Leao-Dourado. Strategically replanting areas that would reconnect fragmented areas, 5,000 trees were planted to create wildlife corridors for the unique Golden Lion Tamarin and the 60 percent of Brazil’s threatened species that live in the Atlantic Forest.

While American Forests’ reforestation projects are only a small-step towards mitigating Rio’s extensive environmental issues, there is still hope for Brazil. Restoring forest land would not only provide more habitat for rare and endangered wildlife, but would also improve Rio’s water quality and help combat climate change, which would discourage the spread of Zika and other mosquito-borne illnesses.

As you enjoy the 2016 Olympic Games, be reminded of how much forests impact our daily lives. While the Rio games came at a price for forests, the attention that the Olympics have brought to Brazil’s environmental issues may inspire more conservation work throughout the country. To read more about American Forests’ projects in Rio de Janeiro or other areas throughout Brazil, visit our Global ReLeaf page.

Mercer, Greg. “The Link Between Zika and Climate Change.” The Atlantic: February 24, 2016.