The Successors of Giants 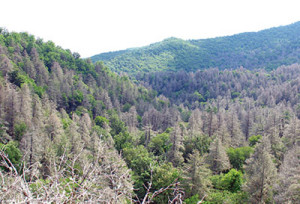 It’s been a little more than two years since Will Blozan of the Eastern Native Tree Society shared his story of documenting the last giants of a dying species in American Forests magazine. In “The Last of the Giants,” Blozan tells of his race against the clock to document some of the East’s most magnificent trees before the invasive hemlock wooly adelgid (HWA) decimated the species. The Tsuga Search Project he headed produced an “ecological snapshot” of southern Appalachian forests in the age of the hemlock.

Since then, HWA has continued to decimate hemlock populations, while other species gradually move in to fill their place. A new study from the U.S. Forest Service Coweeta Hydrological Laboratory in North Carolina more closely reveals some of the effects the replacement of hemlock with other species is having on the southern Appalachian forest — specifically on the hydrologic cycle. 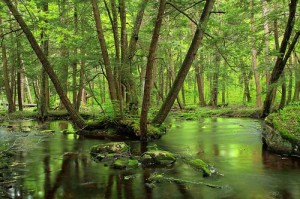 A stream meanders through a forest of hemlocks and mixed hardwoods. Credit: Nicholas A. Tonelli

Because of their dominance in riparian areas and constant year-round transpiration — the loss of water from needles or leaves — hemlocks have played a huge role in forests’ hydrologic cycle. As the hemlocks decline, they are largely being replaced by deciduous trees like sweet birch and red maple, which do not transpire year-round. The only evergreen which has been a contender to replace the hemlock has been the woody shrub rosebay rhododendron, which has a lower total leaf area and thus lower transpiration rate than hemlock. The researchers, led by Steven Brantley, found that as a result of the new species composition, annual transpiration rates fell by 22 percent from 2004 to 2011, while winter transpiration rates fell by 74 percent.

As Brantley says in the U.S. Forest Service publication CompassLive, “In the growing season, transpiration rates will likely rise, leading to lower streamflow in the summer. However, transpiration rates in the winter will be reduced, which could cause increased winter stream discharge.”

Not that streamflow is the only thing that would be affected by hemlock loss along riparian areas. The loss of shade is also causing increased water temperatures, threatening eastern brook trout and other species that live in the cold water. That was a problem in Fridley Gap in George Washington National Forest, Va., for example, where American Forests planted 240 trees in riparian areas to restore cooler water temperatures for the benefit of brook trout.

It remains to be seen what these forests will look like in the future, but by researching what to expect, we can hope to head off some of the negative effects to ecosystems.