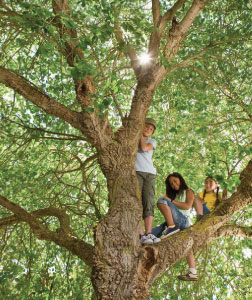 We all feel better after a walk in the park, but can trees really be key to our mental well-being? According to recent studies featured in the New York Times and The New Yorker, they might, improving our physical health as well.

This possibility piqued the interest of Gregory Bratman, a Stanford graduate student.  A study he conducted showed improved happiness and attentiveness after participants walked through a green portion of the university campus. Subjects were compared to another group who walked the same distance near heavy traffic, devoid of vegetation. The “traffic” group reported lower happiness and attentiveness than their “green” peers. While these results were telling, they did not establish a tangible cause for this disparity.

Determined to pinpoint physical mechanism by which nature affects our mood, Bratman organized another study with a similar premise. Two groups of volunteers completed walks of similar distances, one in a park-like area of the Stanford campus and another near a major highway; effects to their moods were measured. This time, however, Bratman used brain scans to examine blood flow to a specific region of the brain associated with negative thoughts. Higher flow means more negative thinking, while lower indicates calmness, positivity, or “happiness.” Again, the “green” group subjects were happier than their “traffic” counterparts, but this time Bratman was able to correlate these differences with actual changes in blood flow in their brains. These results are particularly promising for urban residents, as the volunteers in this latest study were all “city dwellers.”

Another study, led by University of Chicago professor Marc Berman, looked at the health effects of urban forests on Toronto residents. Researchers found that neighborhoods with higher concentrations of trees not only “felt” better, but had lower rates of death from cardiovascular conditions. Perhaps most interesting is that, unlike Bratman’s Stanford study, most subjects were not exposed to an immersive, park-like environment.  In contrast, roadside trees constituted the vast majority of urban forestry.  Therefore positive mood and health benefits are not limited to those with access to forested parks, but available to a large portion of urban residents.

Not Just How… But Why?

Again, there is the question of why nature has these effects on people. Bratman illuminated the physical cause of the mood changes, namely blood flow in the brain, but not why this reaction is triggered. According to Berman, the answer may lie in the concept of “directed” and “involuntary” attention.  I touched on this in my previous blog post about urban forests and children with ADHD, and the explanation remains the same. Directed attention is used for periods of specific focus, such as during a test or while driving. Involuntary attention is used when there is no specific target of attention, such as just sitting on a park bench. Birds chirping, trees blowing in the wind and passersby all momentarily capture your attention before it shifts to something else.  Directed attention is a finite capacity, requiring periods of rest so it may be replenished.  Involuntary attention provides this rest period, allowing your mind to recharge.

Nature draws on involuntary attention so the connection between urban forests and better moods and attentiveness is clear. In fact, Berman conducted a study decades ago at the University of Michigan where participants took a walk through either a natural or urban environment. Afterwards, they completed a cognitive assessment and the “natural” group performed better than the “urban” one. This indicated a higher capacity for directed attention in the “natural” group resulting from their exposure to nature.  As Berman’s Toronto study demonstrated, these performance benefits are not contingent on full immersion in a park-like setting, but rather are triggered by any visual exposure to urban forests.

Studies like these provide insight into more than self-reported happiness or reduced stress. Through objective measures like brain scans and cognitive assessments, researchers can determine the physical and mental reactions that trigger these effects. The potential implications are huge for areas like urban planning, education, and medical treatment. Studies have shown that patients with a nature view from their hospital windows often recover sooner, with several now incorporating “healing gardens” into their grounds. These natural settings in courtyards or on rooftops provide a serene escape from the stark visuals of a standard hospital setting. Similarly, the directed attention boost from viewing nature has been observed to be five times more for those with depression. Patterns like these are exciting areas of study because the need for new solutions to problems like mental illness and stress is rising.

Learn more about the benefits of urban forests!