Home/Blog/Quiet, Please. The Tree is Speaking.

Quiet, Please. The Tree is Speaking. 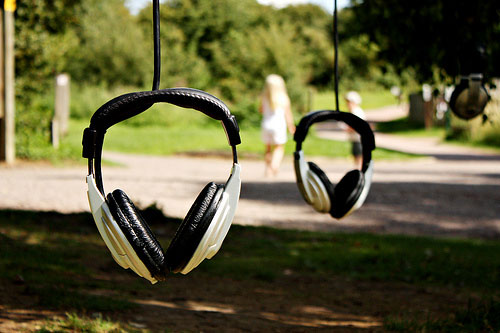 Artist Alex Metcalf’s Tree Listening Project, shown here in 2009, allows visitors to listen to the sounds of trees drawing water from their roots. Now, scientists are learning to discern which of these sounds are indicative of drought conditions. Credit: Tom Grinsted.

As sci-fi as it sounds, the news that trees make noise beyond the human range of hearing — and that some of these noises communicate important messages to other organisms — is not new. Studies have shown, for example, that some plants release pollen in response to bees’ buzzing.

But could trees be saying anything to us? Okay, they may not be speaking to us directly, but new research suggests that, if we learn how to listen, we could gain valuable information on how to protect trees by eavesdropping on them.

It’s long been known that cavitations — air bubbles that block the flow of water throughout the tree — make a sound that can be heard with a microphone. If too many of these cavitations occur, such as we might see in drought conditions, a tree can die.

The problem is that the sounds of cavitations, among other tree activity, are outside our usual range of hearing and can only be heard with the proper equipment. Then, the question of how to tell which sounds are indicative of cavitations — and therefore early warning signs of drought stress — was a bit of a doozy.

Until now. A team of scientists from Grenoble University, Saint-Martin-d’Hères in France, led by physicist Alexandre Ponomarenko, presented a study at last month’s meeting of the American Physical Society that seems to hold the promise of a day when what is now lost in translation could be found. Using a gel capsule-like device developed by Cornell University’s Dr. Abraham Stroock, the scientists were able to take a peek inside a simulated tree and observe the cavitations and other activity at the same time sounds were being recording. Cross referencing the visual and audio data, they were able to distinguish the sounds that corresponded with cavitations from other sounds, such as fractures in the wood. 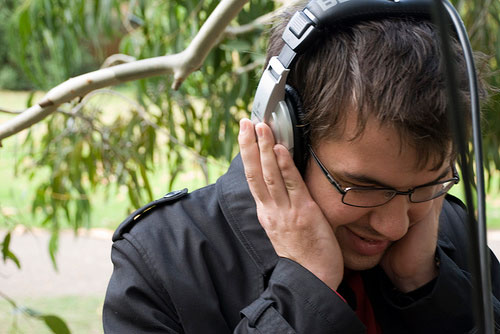 Artist Alex Metcalf’s Tree Listening Project, shown here in 2009, allows visitors to listen to the sounds of trees drawing water from their roots. Now, scientists are learning to discern which of these sounds are indicative of drought conditions. Credit: Tom Grinsted.

By learning to recognize these sounds, we would be able to help trees suffering from drought before it became too late. Dr. Ponomarenko tells National Geographic, “With this experiment we start to understand the origin of acoustic events in trees.” This research could one day lead to handheld devices that allow us to listen to trees or even to devices that stay with the tree, monitoring it fulltime for signs of drought. A sort of walkie-talkie from the tree to us, letting us know when action is needed.

But don’t start tuning your radio for tree signals yet. It will take a lot of hard work and research to apply what was learned from a piece of wood in a lab to a complex, living tree. Nonetheless, the future looks a little less dry.