More than 61 years before Saguaro National Park was created, the area was recognized as a national monument. Herbert Hoover approved this designation on March 1, 1933, in an effort to protect the saguaro cactus, which is a symbol of the Southwest and the Sonoran Desert. This decision marked the first time a national monument was established in order to protect a specific species. After years of environmental expansion and diversification, President Bill Clinton officially signed a bill designating Saguaro as the 52nd national park. This Sunday, October 14, marks the 18th anniversary of the park. 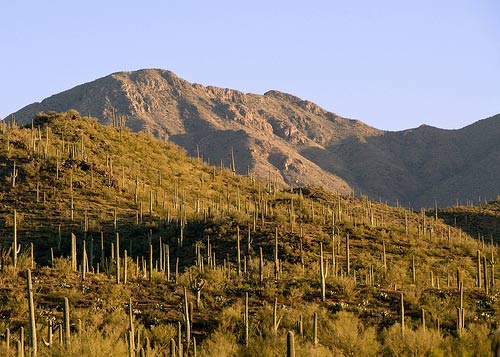 While both regions are filled with the iconic saguaro cacti, they are diverse in their landscape and biological makeup. Tucson, the newer district, ranges in elevation from about 2,200 feet to almost 4,700 feet and contains two different desert environments: desert scrub and desert grassland. Coyotes, quail and the desert tortoise are some of the common wildlife in this region. In comparison, the Rincon Mountains peak higher than those in Tucson (almost 8,700 feet) and contain six different environments, ranging from the scrubs of the Sonoran Desert to mixed conifer forests in higher elevations. Due to the elevation and diverse biotic communities, there is a great range of animals, including black bears, Arizona mountain king snakes and white-tailed deer.

Spring is a popular time for visitors, as wildflowers, bird, and other desert life become active. The saguaro cactus flower, which has been the Arizona state flower since 1931, blooms in the months of May and June. Visitors will want to take advantage of the various trails, drives and tours Saguaro has to offer. One of several scenic roads available in the Tucson District is Bajada Loop Drive. Spanning six miles through the western region of Saguaro, Bajada runs through large groups of cacti and leads travelers to short hikes and convenient picnic areas. Those looking for wildlife and nature walks can venture to the east and make their way around Cactus Forest Drive, an eight-mile road circling clockwise through the Rincon Mountain District.

P.S. Shockingly, neither of the two national co-champion saguaro cacti are located in the national park, but they are nearby. Where are they? Head to our Big Tree section to find out.

Protected: Who We Are