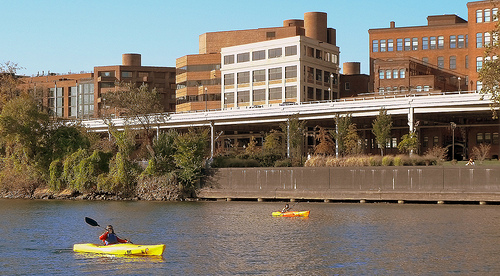 Yesterday, American Rivers released their 2012 list of America’s Most Endangered Rivers. Topping the nonprofit’s annual list is none other than the Potomac River, also known as “the nation’s river” and not far from our headquarters here in Washington, D.C. Nearly five million people rely on it for clean drinking water. The main reason the Potomac is considered the most endangered has to do with urban development and pollution in the Washington, D.C., metropolitan area. Although the river is in much better shape than it was 40 years ago when the Clean Water Act was introduced, high levels of agricultural and urban pollution still remain a threat to fish, wildlife and human health. And it’s not just American Rivers that noticed this trend. The Potomac River also received a D letter grade from the University of Maryland’s Center for Environmental Sciences for the second year in a row.

The health of the Potomac is closely related to the health of surrounding green areas and wildlife that rely on the river’s water. Trees and plants play a significant role in mitigating river pollution. They serve as a natural filtration system to clean groundwater from pollution that might otherwise enter a river system.

But there’s also a big policy concern attached to this issue. House Republicans have recently proposed to strike several provisions from the Clean Water Act that help clean up and protect places like the Potomac River headwaters. So far, none of the proposals have been approved, but advocates remain wary of this Congressional attack on the Clean Water Act. One example is the Preserve the Waters of the United States Act (S. 2245 and H.R. 4965), which would weaken the Clean Water Act  by preventing the EPA from using its jurisdiction to protect private waters. It’s clear from this proposed measure that Republicans remain concerned about the administration’s reach and jurisdiction, but if this measure passes, many endangered rivers would remain vulnerable to pollution.

If you’re concerned about this issue and want to get more involved, please visit American Rivers’ website where you can learn more about endangered rivers and urge Congress to save the Clean Water Act.