February 25, 2016
Escape to Alaska: Sprucing Things Up in the Backcountry

This July, American Forests is gearing up for an adventurous trip into the heart of Denali National Park in Alaska. Before we embark on our journey, let’s take some time to get to know some of the native vegetation that those traveling with us will get the chance to see, such as the white spruce (Picea glauca). The white spruce is native to the northern temperate and boreal forests in North America. It grows abundantly in Denali National Park, and we’ll get the chance to see a generous amount of these beautiful trees because they line Wonder Lake — a secluded Alaskan gem hidden deep in the park and revered for its views of Mount Denali and excellent wildlife spotting.

The white spruce is a member of the pine family that found its roots in central Alaska and across to east and southern Canada. It has now spread its limbs southward into the northernmost U.S. border states such as Montana, Minnesota, Wisconsin, Michigan, Vermont, New Hampshire and Maine. It is an extremely durable tree species and has been described as a “plastic” species because of its ability to repopulate areas at the end of glaciation. The white spruce can live under highly variable conditions; it grows on a wide variety of soils and has well-developed moss layers that significantly affect the mineral soil.

Known by a variety of names, such as the Canadian spruce, skunk spruce, cat spruce, Black Hills spruce, western white spruce, Alberta white spruce and Porsild spruce, the white spruce gained some of its nicknames because of the strong odor given off by broken needles. If you’re trying to spot one while in Denali, they can be identified by their needles which are a beautiful blue-green color, with white lines lining all sides, and gray-brown bark with white inner bark. White spruces usually live around an impressive 250-300 years and can grow to over three feet in diameter and sometimes more than 100 feet tall. 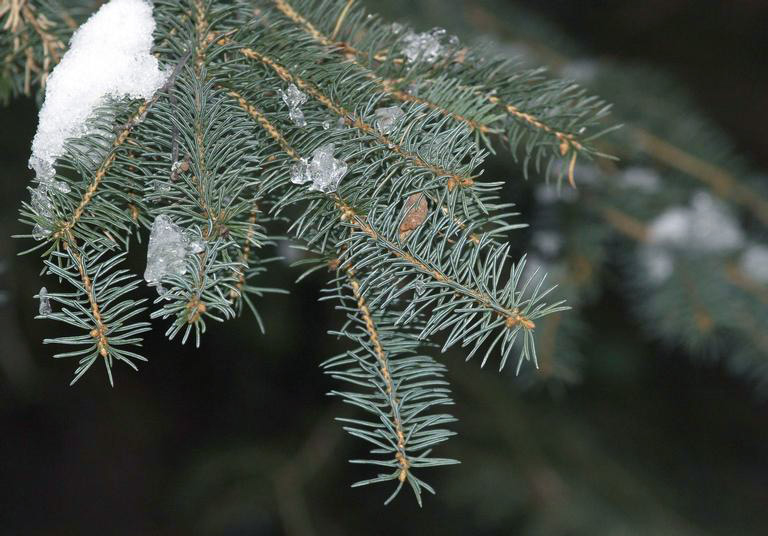 Many useful products can be created from white spruce trees, such as wood fiber and lumber products, and it is known for being one of the most important commercial species in the boreal forest. Historically, the white spruce tree was useful in providing shelter for Native American and white settlers of the northern forest and was the most important species utilized by natives of interior Alaska. Alaskan natives used the wood for fuel and other parts of the tree for uses such as covering summer dwellings, lashing birchbark baskets and canoes and even collecting the resin and extracts from boiled needles for medicinal purposes.

White spruce trees aren’t just helpful to people though — they are eaten occasionally by moose and hares, provide housing for red squirrels and spruce grouse which also consume parts of the tree. They also help our environment by playing a pivotal role in maintaining soil stability and watershed values for recreation. Not only will the white spruce be a beautiful addition to the vast array of plants and animals we will encounter on our trip to Alaska, but it’s also invaluable to the ecosystems that we will be visiting there. Want to experience the white spruce yourself? Join us on this exclusive adventure by registering online!