April 5, 2016
The Important Relationship between Forests and Fire

Fire: the ultimate debate between friend and foe. Our use of fire is what makes us human, while its power of destruction drives our fears.

Since the beginning, we have had a natural urge to control and dominate fire. In the past century, however, the suppression of low-intensity natural forest fire has disturbed natural systems and allowed high-intensity megafires to run rampant.

Naturally, periodic forest fires help to clear away old brush and allow for new growth. They recycle nutrients back into the soil, disperse seeds of fire-adapted plants and burn ground cover to give seedlings a chance at light.

When allowed to burn naturally, forest fires tend to create a mosaic of old growth and new growth, which act as a barrier to the extent of future fires. When a fire hits the border between stages of growth, it is likely to smolder out.

Many trees have adaptations that allow them to survive easier in natural fire. Jack pines and giant sequoias have very thick, fire resistant bark. Most eucalyptus species and pine species utilize tall crowns in order to keep flammable leaves and dead branches high from the ground and away from fire.

Some trees are even fire dependent — such as many pine and eucalyptus trees — and only seed after a fire event when the soil is rich and there are no obstructions to sunlight in the lower canopy. During the blaze, pine cone spines act as a fire-resistant shell to protect seeds. The heat dries out the shell, causing the spines to open easily after a burn, allowing for better dispersal. Serotinous cone species, such as the Jack Pine, will only release their seeds after a fire, rather than at maturation.

These cycles of destruction and regrowth can last hundreds of year and reset after each forest fire. 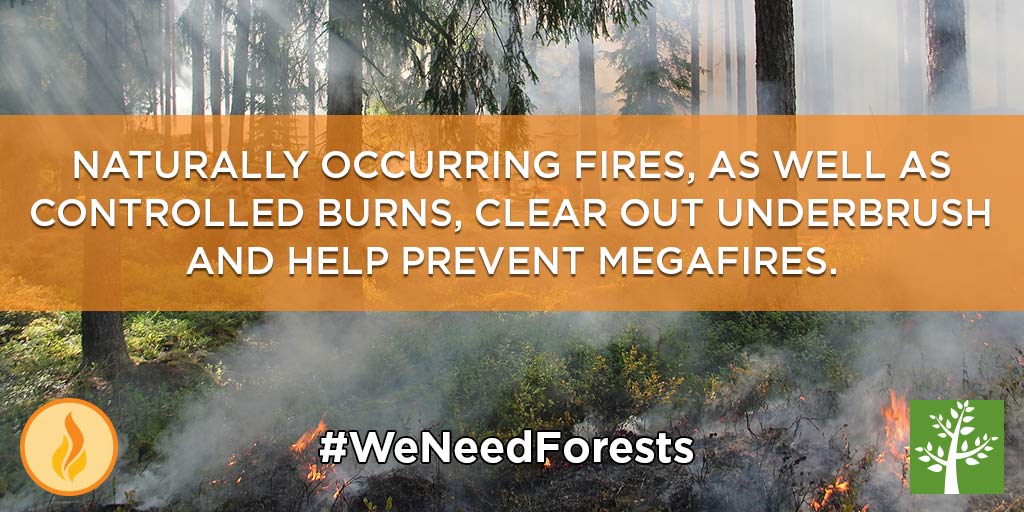 The occurrence of high-intensity megafires can begin in our attempts to tame the forest through taming its fire. It continues with worsened droughts and other conditions due to climate change. An increase in severe burns tops it off, with areas of severe burns expected to increase 50 to 100 percent by 2050.

Controlled burning, or prescribed burns, can be used as a management tool for forests, helping to restore the mosaic of new and old growth, preventing future destructive megafires. Controlled burning can also help reset a sick forest, giving new seedlings opportunity to take root. While fire can be menacing, it can also be helpful to forests in unexpected ways.

To learn more about the relationship between forests and fire, and to join in our Earth Month conversation, visit our Elements of Forests Earth Month homepage and use the hastag #WeNeedForests on social media!