There’s a massive and growing problem in forests across the United States that is not being talked about nearly enough. But to find it you have to look beyond the walls of flames that are erupting in forests more frequently and intensely every year. It’s a crisis of seeds. Simply put, we don’t have enough of them. Or the people to collect them. Or the nurseries to grow them.

In the western U.S., forests are at a tipping point. Drought, heat, tree-killing insects and diseases, and fire — all made worse by climate change — are having profound impacts on our forests. Spurred on by the most severe megadrought in more than a millennium, wildfires are growing in their intensity and severity. The spread of wildfire across the western U.S. has nearly doubled in the last three decades due to climate change. With the increased severity and spread comes the very real risk that many of these forests will not regenerate on their own, and eventually convert from forests to brush fields. This would only hasten a very concerning trend — several states in the West are documenting a transition from forests that are carbon-removal sinks to forests that are a source of carbon emissions. Not to mention a staggering loss of forest habitat essential to both wildlife and humans or the provision of stable life-giving water supplies.

We restore these forests wherever possible and appropriate, guided by science and informed by future climate scenarios. In prioritizing those places hardest hit by the ongoing megadrought and megafires, American Forests has planted more than 67 million trees in the last 30 years alone. As part of the Trillion Trees movement, American Forests has pledged to plant 100 million more trees in large forest landscapes by 2030. And therein lies the problem. To paraphrase Neo in The Matrix: “We need seeds. Lots of seeds.” 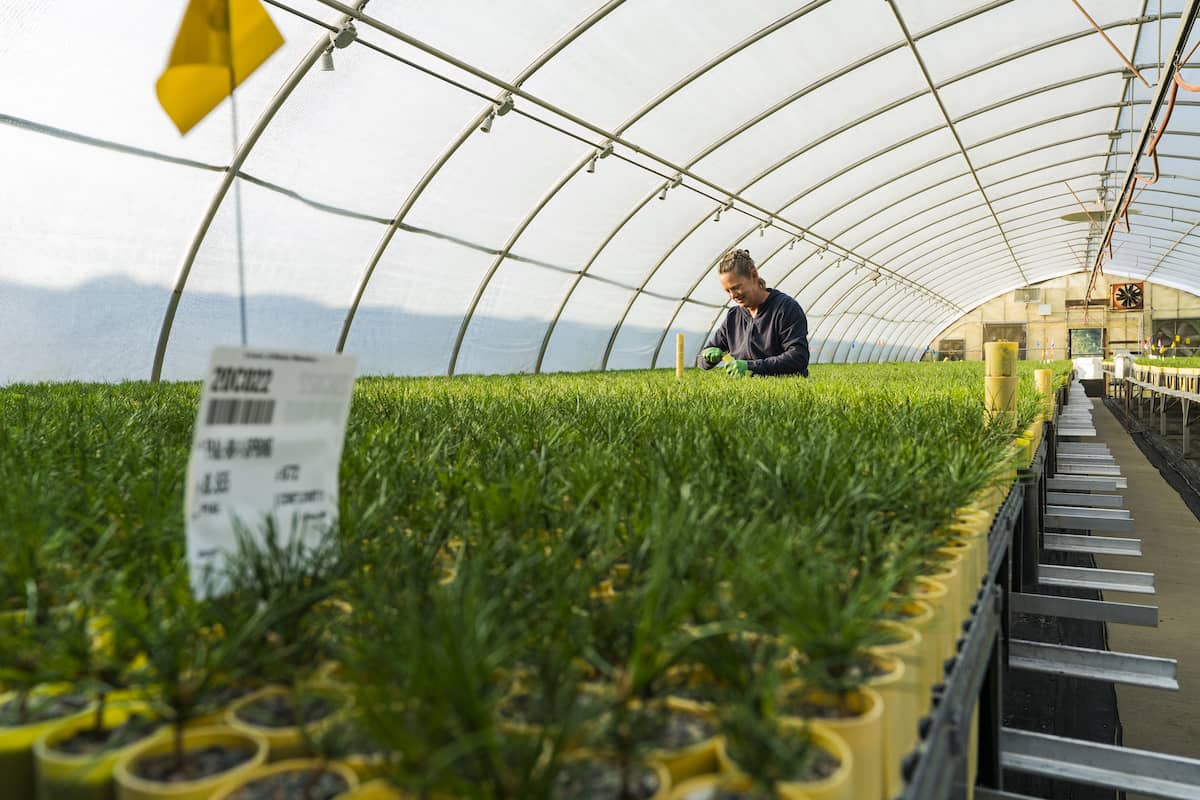 Research co-led by American Forests revealed that there is potential to reforest 133 million acres in the contiguous U.S. But getting even halfway there by 2040 — focusing on locations with highest potential for successful reforestation — would require a whopping 34 billion tree seedlings.

Unfortunately, tree nurseries in the U.S. currently produce only 1.3 billion seedlings per year. So if we want to reforest more than 65 million acres by 2040, these nurseries would have to more than double their annual production, to more than 3 billion seedlings per year. While we have a surplus of seeds in some places that have long prioritized seedling production and reforestation for commercial forestry enterprises, public lands and other ownerships instead have a deficit.

There are two principal drivers of the seed shortage. One is of a more natural phenomenon and the second is purely human. First, in some western coniferous forests, land managers are observing declining availability of viable cone crops. This is because with drought, fire, insects and pathogens comes tree mortality. In places where trees are dying on massive scales, this tree mortality is removing important seed sources — from individual trees that may have favorable genetics for disease resistance or climate adaptation, to entire forests and all the diversity of life that exists therein. Add on the impacts of climate change, such as less predictable and less productive cone seasons, and you have a recipe for disaster.

The second driver of the seed shortage is that seed collection programs are not keeping pace. Most seed in California, for instance, is collected “wild,” meaning directly from the forest, versus grown in a specialized tree seed orchard. Wild collections have challenging logistics to coordinate over several months and large areas, significant uncertainty and far greater costs. Such collection opportunities for some tree species may only present themselves one or two times a decade. For the conscientious forester, missing a collection opportunity can feel like missing your kid’s high school graduation. Yet, we are missing collection opportunities every year. 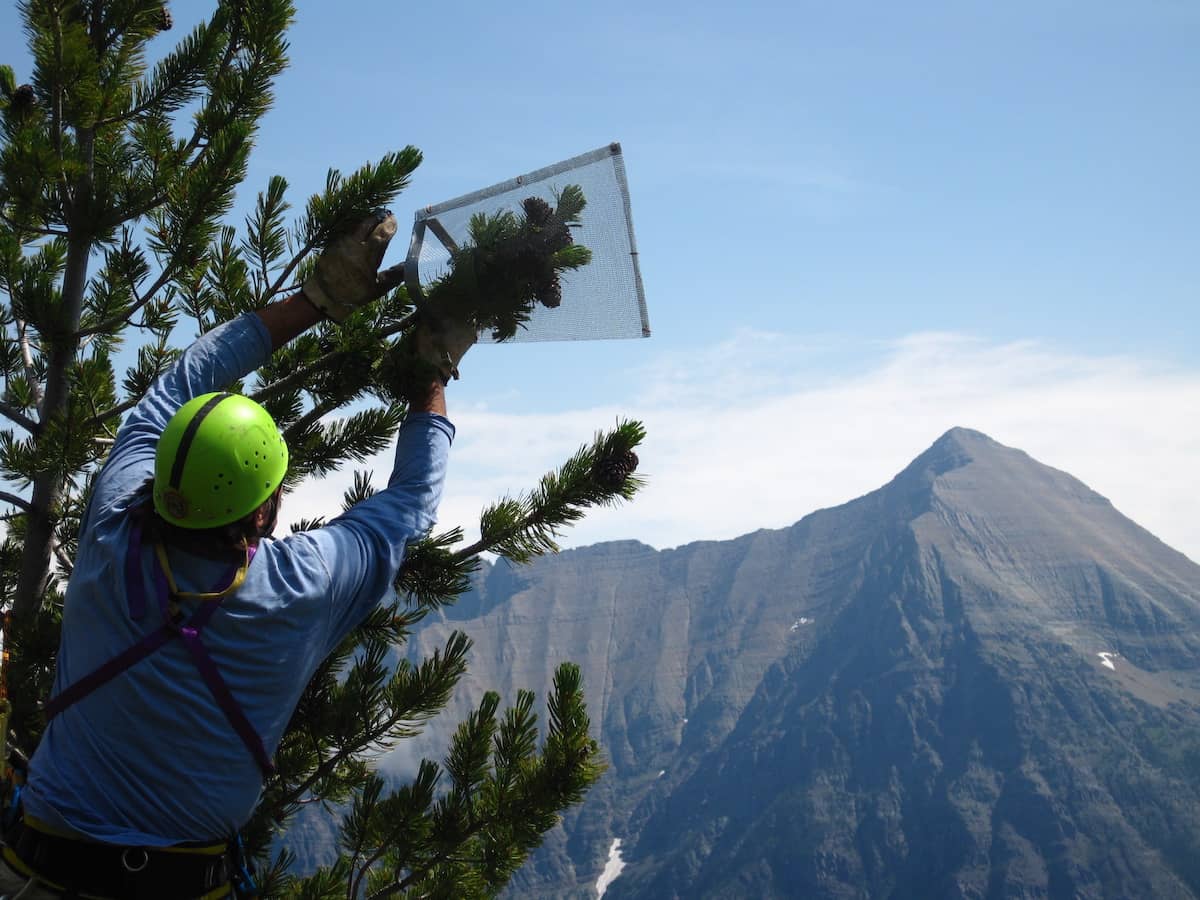 Collecting seeds can be a daunting task. Some species of trees can only be harvested one week out of the year, others, like the whitebark pine, have to be protected from hungry wildlife by placing mesh cages over them.
Photo Credit: National Park Service

So this is hopeless, right?

Wrong. There is a lot of hope. We know what needs to be done and how to do it. And that’s what we’ll be talking about for the entire month of what American Forests is calling “Seed September.” In the coming days and weeks, American Forests will introduce you to the people who are working to solve the seed shortage crisis. You’ll learn about the science and muddy boots field work that’s taking place across the country, from the Pacific Northwest to the southeast tip of Texas.