Microsoft is working to bring economic, social and environmental benefits to its datacenter communities. Through its partnership with American Forests, Microsoft targets two areas: environmental sustainability and workforce development. The partnership uses innovative approaches to plant trees in neighborhoods that need them most and to increase employment opportunities in urban forestry for people from underserved communities.

In cities across the United States, trees are often sparse in low-income neighborhoods and some neighborhoods of color. Low tree canopy has many consequences, but one of the most dangerous ones is an inability to cool a neighborhood down. That’s particularly true in Phoenix, one of America’s hottest cities. In 2019, 187 people died from heat-related causes in Maricopa County, Ariz., which includes the city of Phoenix. That’s an increase of 232% from 2006, according to data from the Maricopa County Department of Public Health.

The negative impact of extreme heat is not felt equally throughout the city. In south Phoenix, for example, many neighborhoods are 10 degrees hotter than those in other parts of Maricopa County, according to American Forests’ Tree Equity Score.

In 2021, Phoenix became the first U.S. city to commit to creating Tree Equity and is working on a plan to increase its tree cover substantially by 2030. Thanks to Microsoft’s support, American Forests was able to develop a Tree Equity score to guide planting in Phoenix and other urban areas of Maricopa County.

Microsoft’s support is also helping fund a study to assess climate vulnerability throughout the metropolitan area and do large-scale tree planting with a goal of developing an equitable distribution of trees across the Phoenix region that benefits all residents. 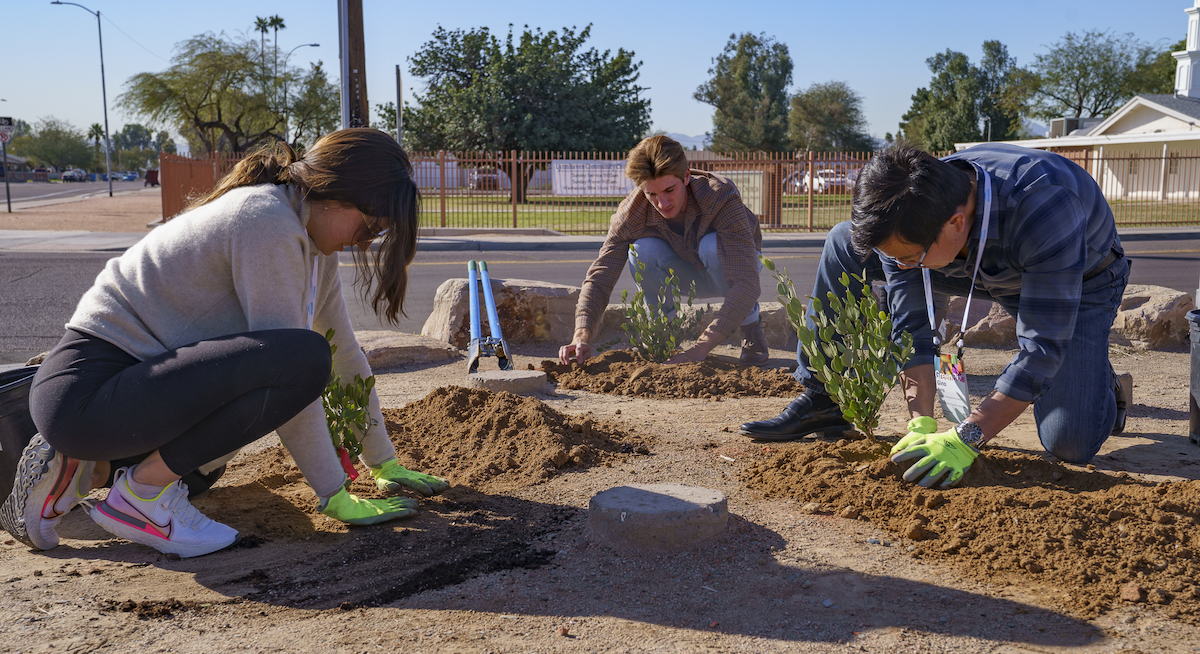 Microsoft is committed to community development where the company’s employees live and work. As Holly Beale,  program manager of datacenter  community  environmental  sustainability,  puts it, “Our objective is to help datacenter communities achieve their environmental goals and ambitions. As an integral and contributing member of the communities in which we operate, our vision is to inspire the adoption of innovative approaches to environmental responsibility and ignite action in protecting the natural and human environment.”

Already, the partnership is making an on-the-ground impact in the Phoenix region. In 2021, Microsoft funded the planting of more than 50 trees at Thompson Ranch Elementary School, in the neighborhood with the lowest Tree Equity score in El Mirage, Ariz. And a year earlier, 50 volunteers, including Microsoft datacenter employees, planted dozens of trees at Granada Elementary School, which is in an area with high populations of immigrants and low-income families and also has dramatically low tree canopy coverage compared to wealthier regions of the city.

San Antonio, like many cities, is suffering from a shortage of well-trained people to take care of its trees. The problem is especially critical, given that the city desperately needs to preserve the precious tree canopy it has. In 2018, San Antonio learned that its tree canopy had shrunk dramatically over the previous 15 years, from covering 38% of the city’s land to just 23%. The decline has prompted city officials to prioritize caring for the city’s trees and building a qualified, well-trained urban forestry workforce to continue that work.

The pilot program, which provides industry-focused tree care education and safety training, fills a major gap in urban forestry workforce training in San Antonio. Industry groups have shared that budgets for safety training have been slashed, leaving tree care companies with limited capacity to safely onboard and train their workers. The industry also faces a high rate of turnover. Tree trimming, pruning and climbing are dangerous jobs, and according to the San Antonio Arborist Association, untrained workers have been seriously injured due to not using the proper safety techniques. And as of now, there is limited public capacity to care for trees that aren’t on public parks and campuses, such as libraries.

One of the key goals of the project is to ensure the tree education and safety course is accessible to those new to the field or those who wouldn’t otherwise be able to receive this training.

Thanks to Microsoft’s support of this innovative program, San Antonio residents who need jobs most will have an opportunity to care for the city’s green infrastructure and ensure that all residents will benefit from trees.