MY ENTRY into climate activism began when I read Bill McKibben’s book, “The End of Nature,” more than 30 years ago. I felt his message down to my core: Climate change is the first environmental threat that touches every inch of our planet, and even bends nature itself in a way that could irretrievably break our planet’s natural cycles of healing.

My immediate reaction was to sell my gas guzzling car, turn off lights like our planet depends on it, and scour my personal life for every way I was contributing to the greatest environmental threat we have ever faced. I was not alone. Books like “50 Simple Ways to Save the Earth” were popular then, and personal action was treated like a serious piece of the climate action puzzle.

I regret this is not so much the case anymore. In fact, many in the climate action movement seem intent to convince individuals that their own choices are irrelevant, and that our only hope is for government leaders and businesses to implement systems-level changes that will force us to do the right thing. To be sure, systems-level changes are absolutely needed, but are less likely to take root if not fueled by collective individual action. Unfortunately, these strident climate voices embrace fear as their primary mode of persuasion, figuring that if the warnings from scientists grow dire enough, we will suddenly have a whole- sale shift in our politics and economy, motivated by a fearful citizenry.

This isn’t working. Fear that one cannot personally act on too often inspires paralysis, not mobilization. Far too many people in our country right now are mired in climate despair and feeling a lack of personal agency to do something about it other than “vote and hope” every few years. 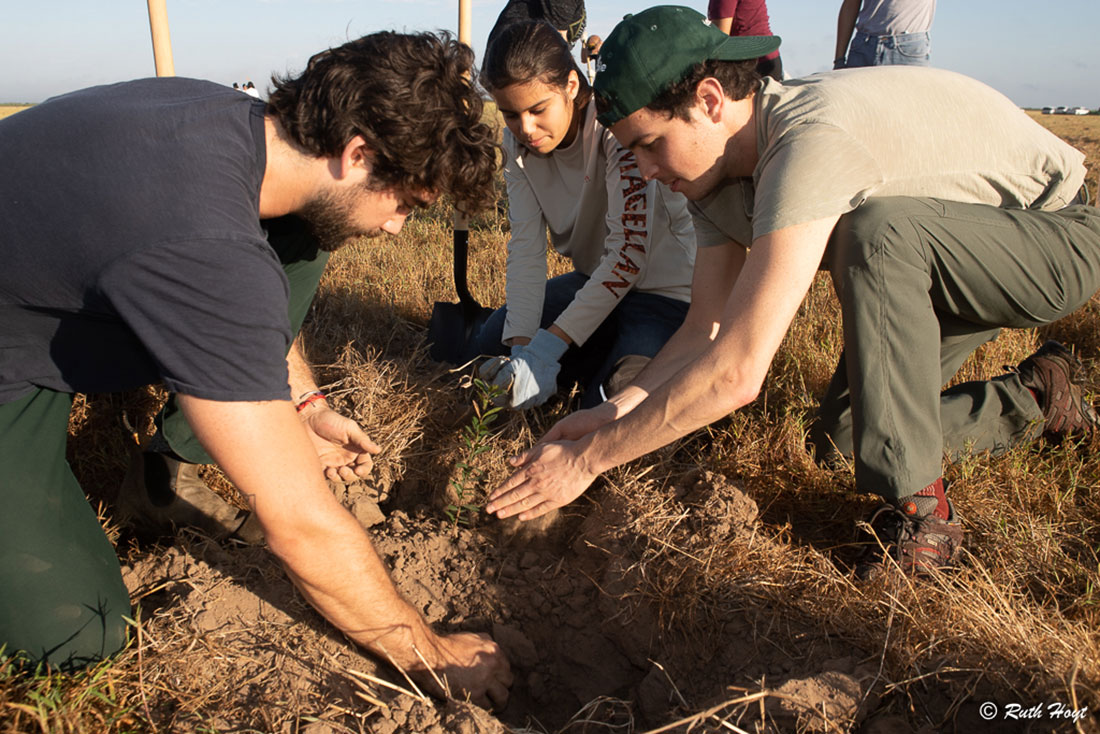 The excitement about using trees and forests as a climate solution is strongly tied to the fact that everyone can relate to trees, and even play a role in planting and caring for them.
Photo Credit: Ruth Hoyt / American Forests

Hope comes from feeling the power to be part of a solution. I have seen again and again that the most dedicated and effective advocates for others to take climate action, like a citizen speaking to a member of Congress, are those who can speak from the conviction of living the change themselves.

And the pace of change in our economy will be directly tied to the actions of consumers, not just the choices of corporate CEOs. Those electric cars that must become our new normal, for example, won’t drive off the lot on their own. Businesses need us to show that we will hold up our end of the bargain and purchase climate friendly products at the first opportunity. We might eventually force needed changes from the top down with governmental action, but we will lose valuable years of climate action in the process if we can’t match government mandates with individual buy-in.

So, what does this mean for the work of American Forests? A whole lot. You see, we are finding that the excitement about using trees and forests as a climate solution is strongly tied to the fact that everyone can relate to trees, and even play a role in planting and caring for them. That’s why, for example, youth groups such as the Girl Scouts of the USA and faith-based organizations like EcoSikh, Evangelical Environmental Network and Laudato Tree are all embracing tree planting as a way for concerned citizens to take action.

And this action is not just limited to planting trees one at a time. We are seeing many of the same people who have become involved in community-based tree planting also become passionate advocates for massive government, corporate and nonprofit efforts to plant Tree Equity across whole cities and reforest millions of acres across damaged forest landscapes. Who better to explain to public officials the power of trees to solve climate change than someone who has personally put in the time and effort to plant one!

As we seek to lead America and the world to embrace trees and forests as a climate solution, American Forests will continue to hold true to the belief that no contribution is too small when you are building a movement, and to create diverse ways for our members to participate in advancing forest solutions. We are also doubling down on our leadership of the 1t.org US Chapter, an unprecedented coalition we created with the World Economic Forum to empower individual and societal action because we understand how deeply they are connected. With hope in our hearts and locked arm-in-arm as one nation under trees, we really can do anything, even conserve, restore and grow 1 trillion trees worldwide to help solve climate change.

Thank you for taking the individual action to be part of American Forests and part of this movement!