July 8, 2021
Achieving Tree Equity can help combat extreme heat
“Our cities are being cooked by urban heat islands that turn up the temperature for people who live in oven-like areas dominated by pavement and lacking trees, parks, and other natural cooling features.”
By Jad Daley

When it recently hit 105 degrees Fahrenheit in Seattle, an all-time record for this famously cool city, we effectively entered a new era of extreme heat, with serious implications. How serious? Recent research led by Duke University estimates heat already causes 12,000 premature deaths in America annually, which could increase to nearly 100,000 per year under the worst climate change scenarios.

So how do we keep everyone cool and safe as killer heat waves become the norm?

We can start by not making it even hotter. Our cities are being cooked by urban heat islands that turn up the temperature for people who live in oven-like areas dominated by pavement and lacking trees, parks, and other natural cooling features. In cities such as Boston, Memphis and Columbus, this phenomenon makes the hottest neighborhoods roughly 10 degrees Fahrenheit above the city average.

This extra heat is borne most often by communities of color and lower-income communities. We have searchable proof through a powerful new tool, Tree Equity Score, which for the first time maps trees, demographics, and urban heat islands in every urban neighborhood across America. 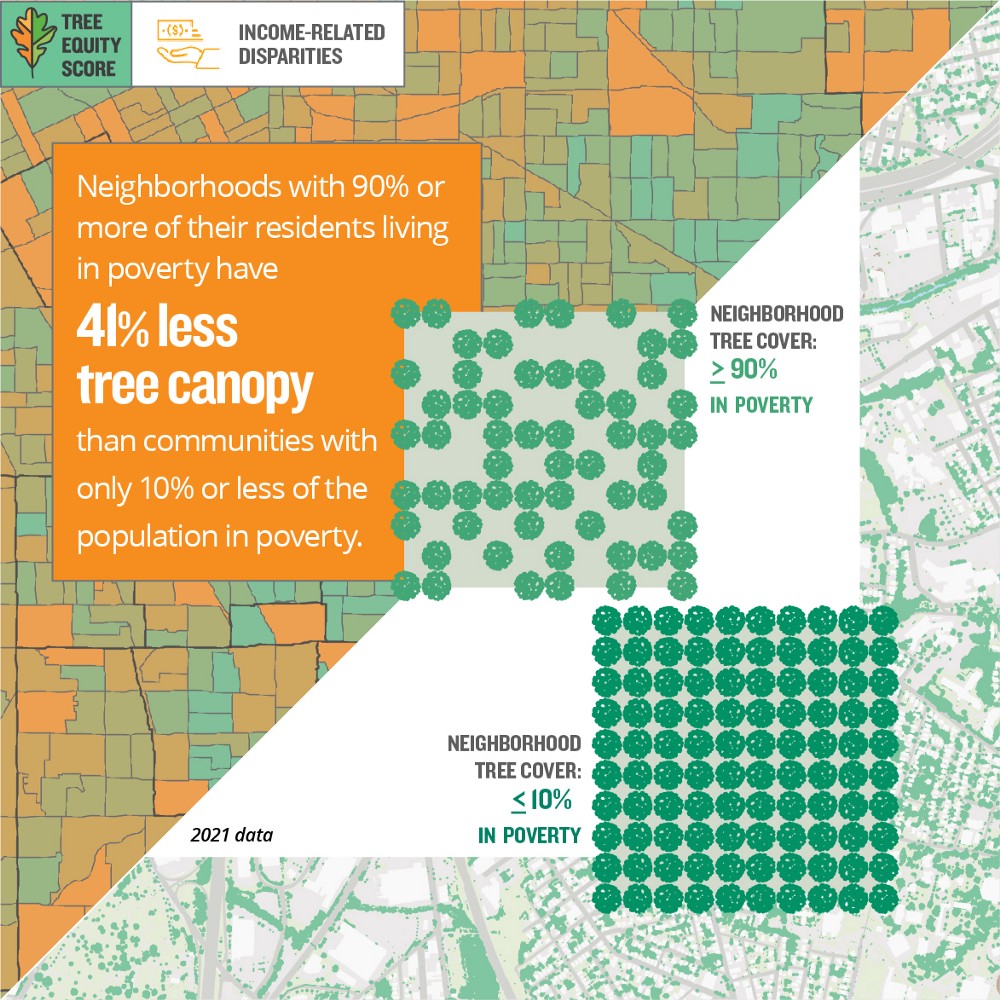 This lack of trees in some neighborhoods means extra heat and life-or-death consequences for the people who live there. Trees can cool the area underneath them by as much as 45 degrees. One study led by Georgia Tech shows that fully deploying trees and cooling surfaces in Dallas could reduce heat-related deaths by 22 percent.

So how did we allow lack of trees to endanger people in certain neighborhoods? It isn’t simple, and it’s not a coincidence.

First, we have historical factors that still impact us today, like the racist practice of redlining. This limited access to credit for people in neighborhoods of color and discouraged cities from investing in public spaces, such as city streets and parks. Redlined neighborhoods were also disproportionately hit by damaging development, from highways that divided communities to siting of polluting facilities.

This inequity is sustained today by factors such as imbalance of political power and the tendency to focus green amenities into “nicer” neighborhoods while polluting facilities are concentrated in already-impacted areas. If you doubt this pattern of ongoing bias and under investment, you can see the same inequity in public parks that we see with trees.

There is so much at stake in Tree Equity. Beyond saving lives, cooling from urban trees already reduces home energy use 7.2 percent on average, saving homeowners more than $7 billion. And trees scrub 130 million metric tons of carbon dioxide and 820,000 tons of air pollution per year. That means Tree Equity can deliver healthier, more equitable cities and real action to slow climate change.

So how do we deliver this natural solution? Tree Equity Score provides neighborhood by neighborhood scores that identify where we need to step up tree planting, maintenance and protection, working in close concert with community members in these neighborhoods. It also allows any city to calculate the total number of trees needed to bring all its neighborhoods up to a passing score of 100, and quantifies the different ecological and economic benefits that would be generated — right down to extra tons of air pollution removed each year and number of jobs that would be supported.

Tree Equity Score calculates that we could achieve Tree Equity for every urban neighborhood across America by planting 522 million additional trees in the right places. While this represents a major investment, it would increase environmental benefits from urban trees by an additional $5 billion per year and support nearly 4 million full-time and seasonal jobs. And most importantly, it would save lives. 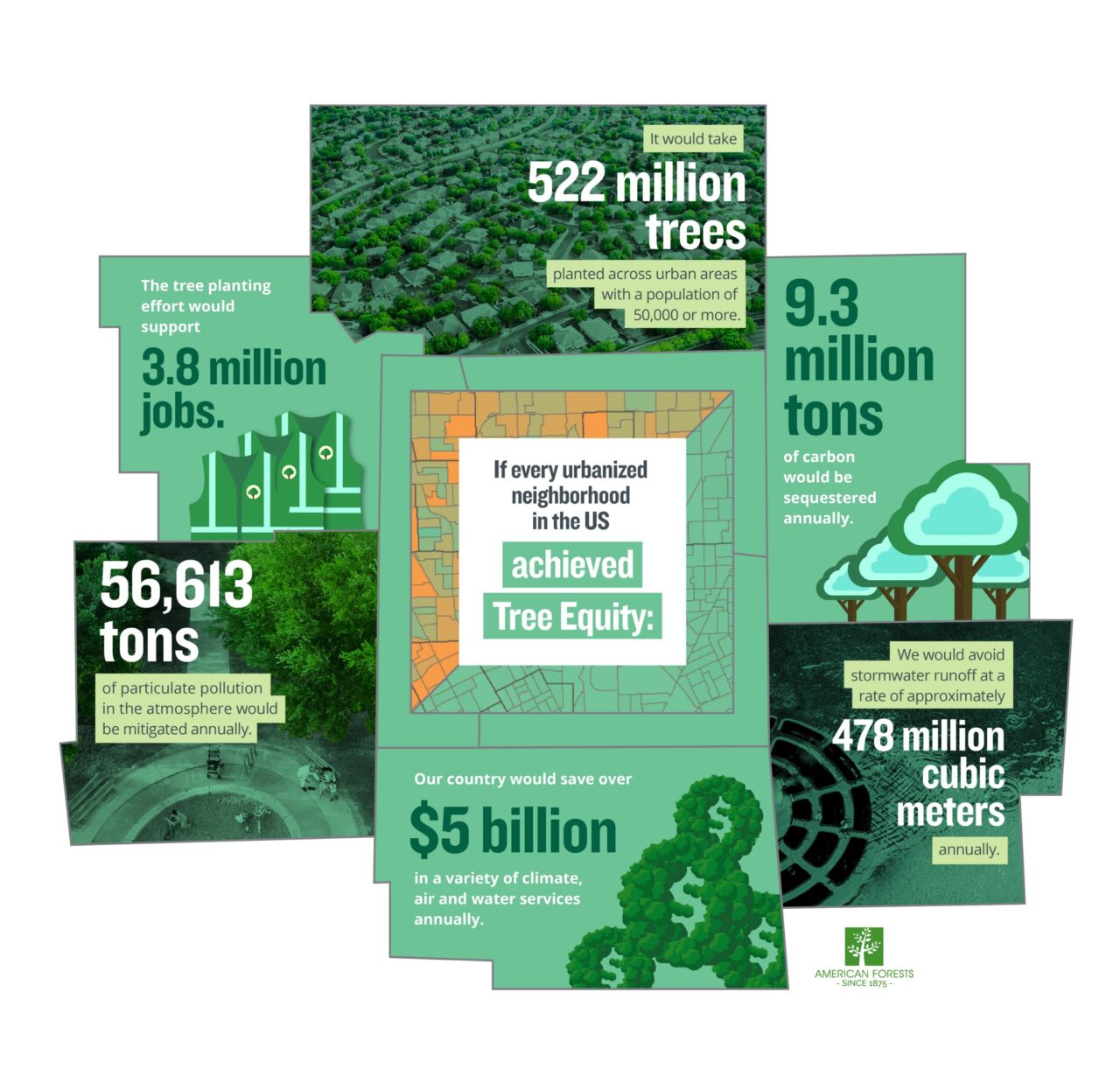 Everyone has a role to play, but especially Mayors and their partners. We have a national model in the City of Phoenix’s landmark pledge to achieve Tree Equity in every neighborhood by 2030, developed with more than 50 organizations in a recently-formed Metro Phoenix Urban Forest Roundtable.

The federal government also has a vital role. For a fraction of the trillion dollars our nation is ready to spend on infrastructure, we could help our cities plant and maintain Tree Equity as a green infrastructure for health equity and climate resilience.

With our climate in full boil, now is the time for this life-or-death investment.