Why is one neighborhood hotter than another? Chances are it is because it has fewer trees. Trees help cool neighborhoods down and reduce what’s called the “urban heat island effect,” the creation of “islands” of heat that result in a dangerous rise in temperature and disproportionately affect vulnerable populations, low-income communities and people of color. The urban heat island effect, made worse by climate change, has serious effects on people’s health, especially children and the elderly. On average, urban heat islands are 5 to 7 degrees warmer during the day, and can increase temperatures by as much as 22 degrees at night. If actions aren’t taken to slow climate change, heat-related deaths from 2031 to 2050 could be 57 percent higher than they were from 1971 to 2000. Planting and conserving trees is one equitable way to reduce urban heat islands and save lives.

When dark colored surfaces like roads and rooftops absorb and hold heat from the sun, they trap and slowly release heat back into the air, increasing temperatures in the surrounding environment and creating little islands of heat. Heat islands often get hotter throughout the day, becoming more pronounced after sunset because the heat that was stored is slowly released at night. Urban areas tend to have more roads and rooftops, so they experience warmer temperatures than nearby rural areas. Within cities, neighborhoods with fewer trees and plants and more buildings and roads feel hotter than others with more greenspace and vegetation. 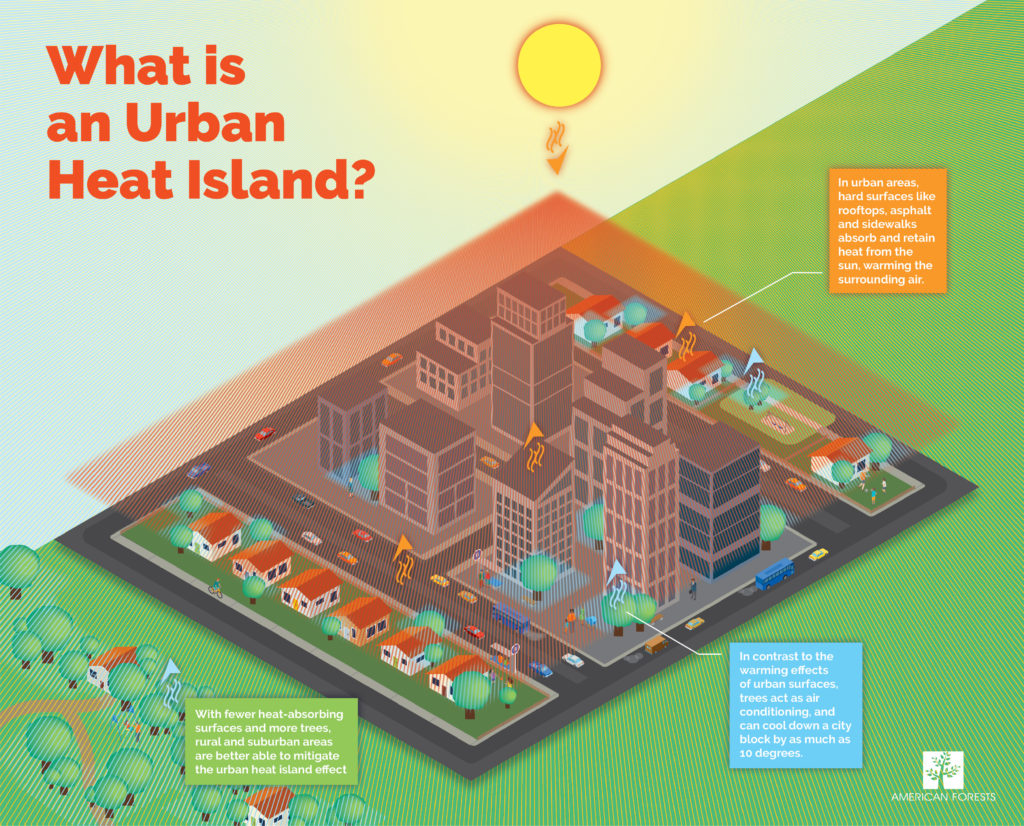 Urban heat Islands (UHI) pose a serious threat to public health, particularly for children, the elderly, people with respiratory illnesses and those who work outdoors. Higher temperatures can increase the risk of heat-related illnesses such as heat stroke or heat stress and even death. Older adults who are stressed by heat during the day need to cool down and recover at night. But high nighttime temperatures make it more difficult to do so, and increase the risk of heat stroke. High temperatures also intensify air pollution in cities by creating smog, a dangerous pollutant that can make it difficult to breathe, which in turn triggers asthma attacks and spiking emergency room visits. This is particularly concerning because asthma is the most common chronic disease among children.

People with lower incomes and people of color generally have higher incidences of pre-existing health conditions that make them more vulnerable to heat impacts. And lower-income neighborhoods and communities of color are, on average, much hotter than more affluent White communities. That’s largely due to systemic inequities and discriminatory policies and practices. What’s more, many families in these groups are among the 13 percent of U.S. households that do not have air conditioning. Still others cannot afford to fully operate their air conditioning systems.

How does climate change intensify the urban heat island effect?

Climate change is leading to higher temperatures and longer, more intense and more frequent heat waves. Cities will suffer even more during extreme heat events. Actions like planting and maintaining city trees and other vegetation can help keep cities cool. These actions can also help cities be more resilient to other climate change impacts like reducing flooding and improving air quality.

What role do trees play in mitigating urban heat islands and promoting health? 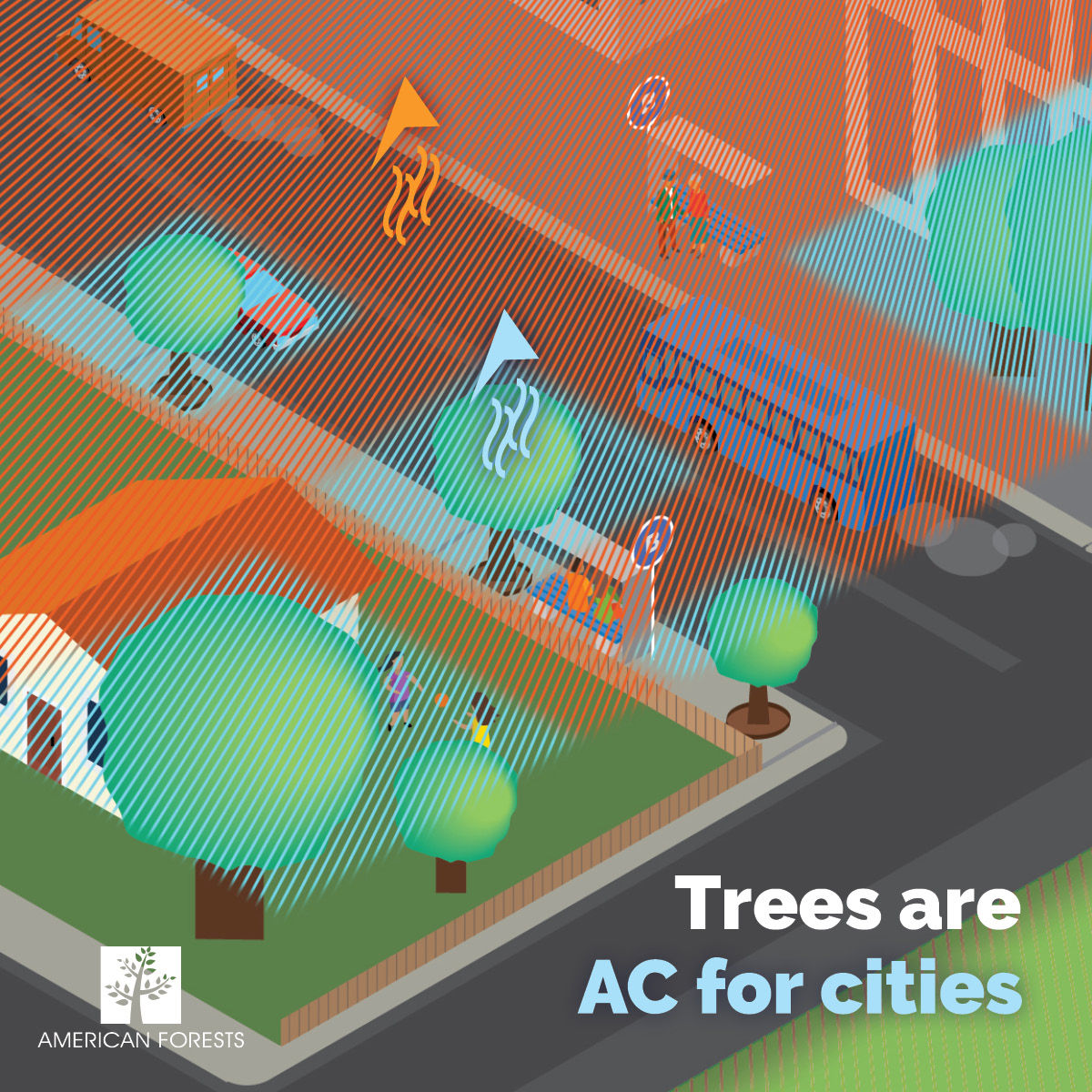 Trees also benefit urban areas by making it easier for us to breathe. Trees act as air filters, absorbing pollutant gases and filtering particulates from the air by trapping them on bark and leaves. Trees help filter the air not only to benefit people but also the earth’s ecosystems as a whole. Nationwide, city trees already prevent approximately 1,200 heat-related deaths and countless heat-related illnesses annually. This is particularly critical now, during COVID-19, which disproportionately affects people of color.

As temperatures rise across America’s cities and the ongoing coronavirus pandemic strains physical and mental health, more people than ever are seeking refuge in parks. But not everyone is finding that refuge. A study conducted by the Trust for Public Land found that across 14,000 U.S. city neighborhoods, communities of color are more likely to be located near smaller asphalt-filled parks. These parks are also 5 times more crowded than parks serving majority white communities. This disparity in access to the kinds of parks that adequately reduce temperatures and provide cooling calls for a new approach to expanding urban forests and parks.

For these reasons, American Forests is committed to creating Tree Equity. By planting the right trees, the right way in the right place, we create healthier, climate-resilient communities for everyone. One way we do so is by participating in coalitions, such as the Extreme Heat Resilience Alliance, which is addressing the growing threat of extreme urban heat on vulnerable people worldwide.