December 14, 2022
Hope for a threatened species
By Wes Swaffar

Whitebark pine may just be the most important tree species you have never heard about. Unknown to many by name, but fiercely loved by a growing group of researchers, recreationists and environmentalists, whitebark pine is one of several long-lived pine species that thrives in the highest elevations of the mountain West. Ranging from Southern California to Alberta, Canada, it covers an impressive 56 million acres in the United States alone. Where it exists, whitebark pine is a keystone species — standing at the center of a web of life and providing vital calories and habitat to wildlife, like the grizzly bear. Whitebark pine forests are also of incredible importance to water supplies, capturing and retaining snowpack in high-elevation headwaters regions of the West.

Just laying eyes on a whitebark pine forest can be a physical feat — requiring hours of hiking in treacherous terrain to reach its subalpine habitat. Those who do are inevitably rewarded with remarkable scenery and memorable backcountry experiences. Others may find themselves among whitebark pines through more accessible means, such as a visit to Yellowstone, Yosemite or Glacier National Park, or a trip to a local ski resort. Either way you reach them, the grandeur and beauty of these trees and the places they grow are both immersive and gripping. It is from these special, well-earned moments in the high country where our whitebark stories begin. 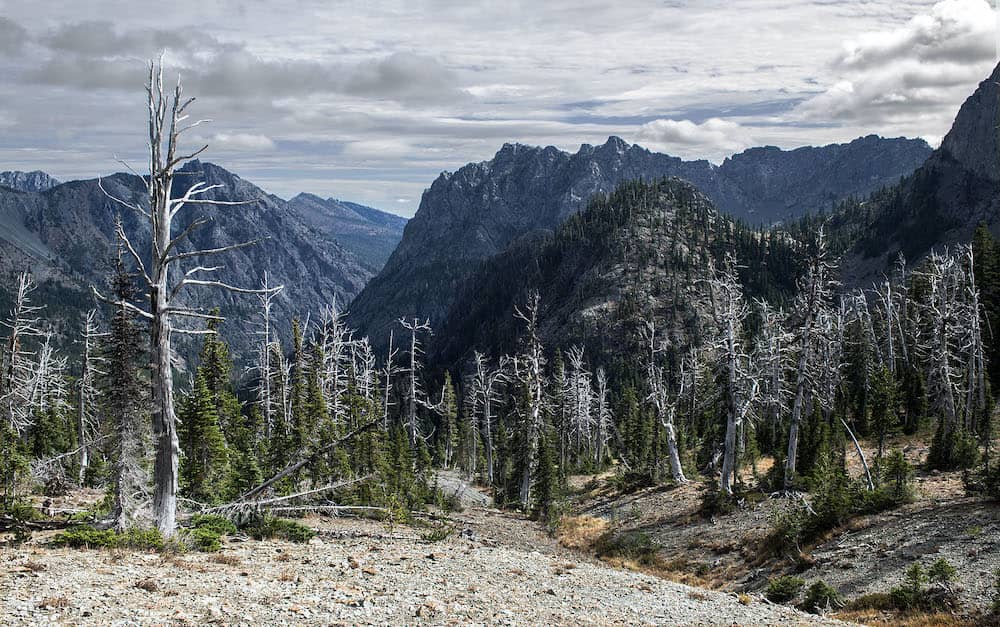 My whitebark pine story began on top of a windswept ridge on a September day in Montana’s Scapegoat Wilderness. Wet behind the ear as a wilderness ranger and out of breath from a steep climb, I stood in awe as my U.S. Forest Service supervisor pointed out an entire ridge of what she called “ghost forests” — several football fields worth of dying whitebark pine trees. She noted, rather matter of fact, that these trees were dying from a disease called white pine blister rust.

The Scapegoat Wilderness — part of the larger Crown of the Continent Ecosystem — is ground zero for the species’ decline. White pine blister rust is a disease caused by a non-native fungus that was introduced to western forests in the 1900s. The disease, which is now ever present in our forests, infects and slowly kills whitebark pine, and is the primary driver of its decline across its vast range. Mountain pine beetle infestations, changing fire patterns and climate change are also adding stress to whitebark pine ecosystems. So severe is its decline that across its seven-state range, there are now more dead whitebark pine standing than live trees. Parts of the Crown of the Continent ecosystem, where my whitebark story began, have blister rust infection levels as high as 90%, promising only future losses. The widespread decline of whitebark pine prompted its proposal for listing as threatened on the Endangered Species Act (ESA) in December 2020, and a final listing as Threatened in December of this year. The threatened listing is nothing if not a clear signal that the species needs help.

This listing is a big deal

Now listed as a threatened species, whitebark pine is the widest-ranging tree species ever listed under the ESA. While most ESA species have small and endemic populations, whitebark pine trees boast an impressive range — millions of acres spread across California, Nevada, Oregon, Washington, Montana, Idaho and Wyoming. If we lose whitebark pine we stand to lose our high-elevation forests as we know them. 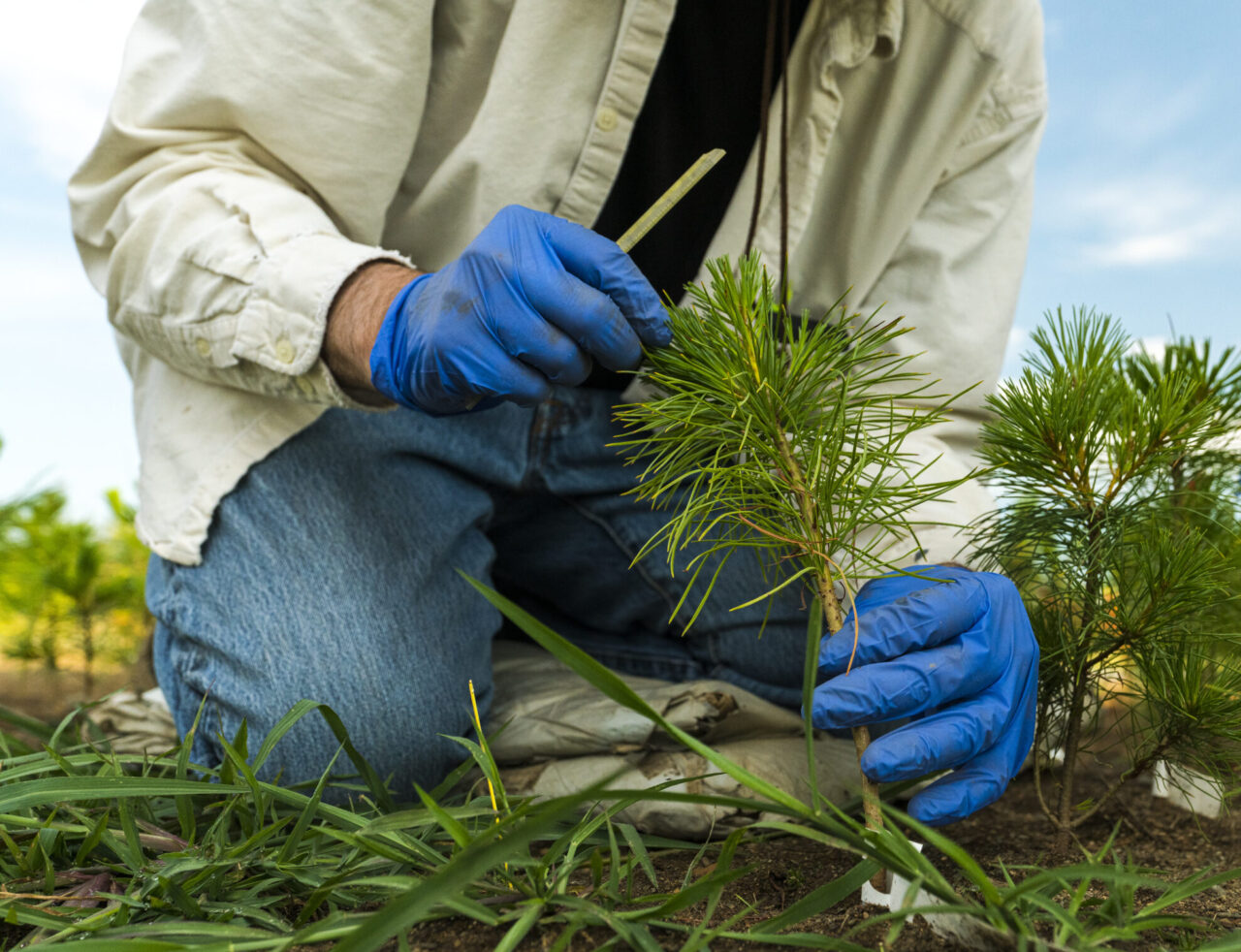 Hope for the future

I now find myself surrounded by leaders in whitebark pine research and reforestation. They inspire me with their tireless commitment to restoration efforts, fueled by their own whitebark stories. Over recent decades, Forest Service managers and researchers have developed innovative restoration techniques that increase genetic resistance to white pine blister rust within the population. By identifying parent trees that are resistant to this disease, these land managers are able to harvest seeds and plant seedlings able to withstand this blight. These efforts are getting a jumpstart thanks to the REPLANT Act and other recent federal funding wins. The Confederated Salish and Kootenai Tribes have embraced whitebark pine restoration as a cultural and forest management priority. Additionally, researchers and scientists are piloting new methods for protecting and restoring the species. Overcoming the challenges of whitebark pine die-off is not only possible, it’s working. However, whitebark pine seedlings take time to mature, and there are many acres to still replant. Recovering these whitebark pine ecosystems will be a massive undertaking that will unfold over many years.

That’s why American Forests and the  Whitebark Pine Ecosystem Foundation have been working  with federal agencies and tribal nations to develop the National Whitebark Pine Restoration Plan. This strategy provides a shared “restoration roadmap” that prioritizes areas to focus restoration efforts, with the goal of building genetically resistant populations of whitebark pine forests across its range. The plan will be an indispensable resource for guiding restoration and recovery efforts in the years ahead.

With a science-based plan and a clear picture of the road ahead, it’s time for us to get to work.

What is our whitebark story?

Nowadays, when I venture back to the same ridges in the Scapegoat Wilderness where my whitebark story began, I no longer focus on the ghost forest of standing dead trees. Instead, I scan the forest for the rare healthy and mature trees — so-called “plus trees” — that are suspected to harbor genetic resistance to white pine blister rust, and whose seeds will be tested to confirm resistance and then used to grow tomorrow’s seedlings.

While the ESA listing is a sobering milestone for land managers, scientists and organizations across the West, American Forests chooses to embrace this moment by raising awareness and support for restoring whitebark pine ecosystems. This includes partnering with the Cornell Lab of Ornithology and the Ricketts Conservation Foundation to share a powerful short documentary that invites audiences into the world of whitebark pine and restoration efforts. We’re excited to share more about this work soon, and we hope that you will join us to Save the Whitebark Pine.