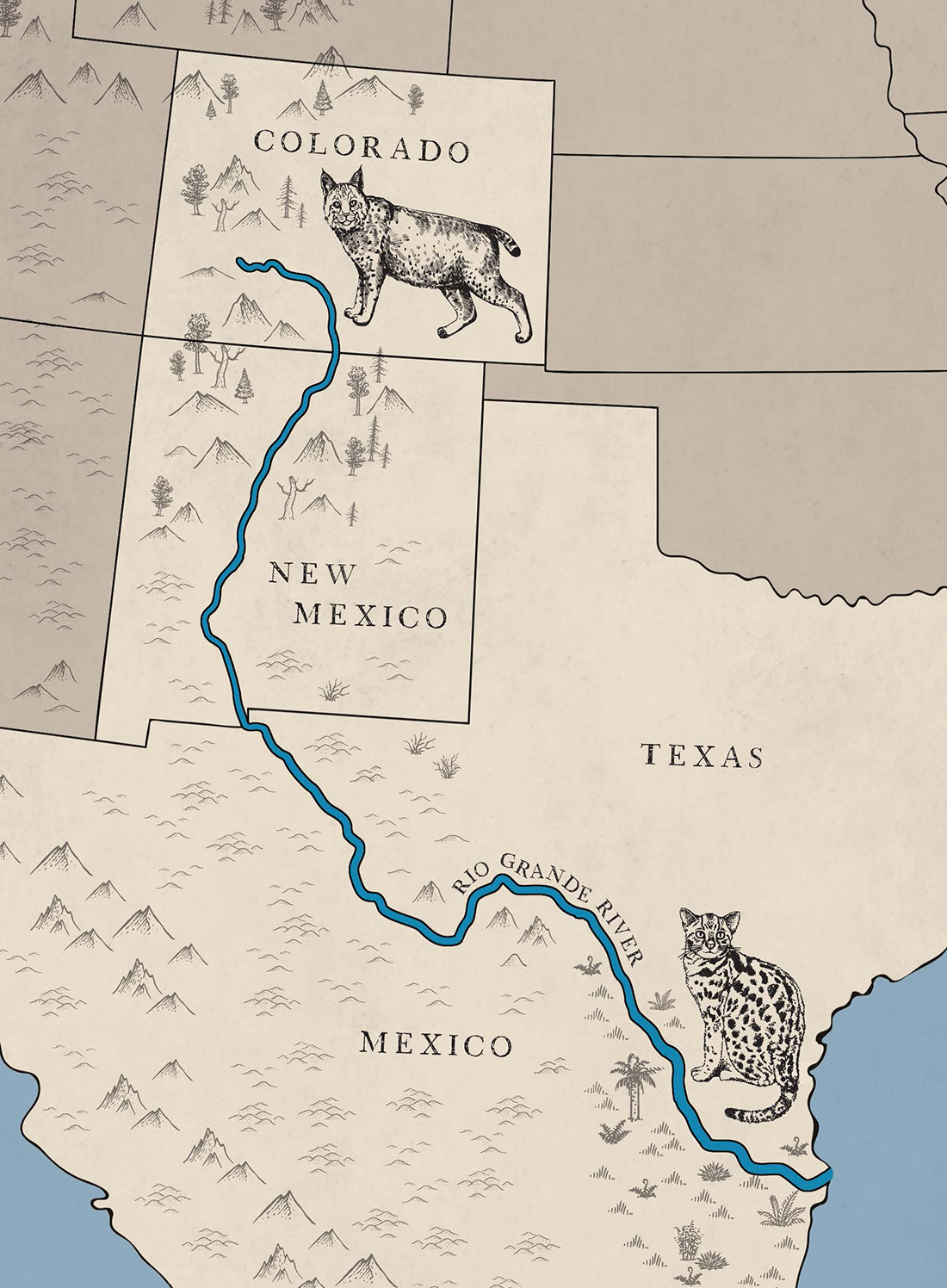 DEEP IN THE RIO GRANDE NATIONAL FOREST in southwest Colorado, a Canada lynx steps across a meandering stream, its pointed ears tipped with black tufts poised like antennas for any sign of snowshoe hare, its preferred prey. The stream’s cold water nourishes not only this threatened feline, but also the high-elevation spruce forest of the area, which is fighting to recover from beetle infestation and fire.

The stream grows as it rolls down the slopes of the Rockies. And as it continues to flow, becoming the Rio Grande River, it makes a bee-line through New Mexico and eventually barrels along the border between Texas and the Mexican states of Chihuahua, Coahuila, Nuevo León and Tamaulipas. Finally, 1,885 miles from where it began, it spills into the Gulf of Mexico.

There, at the great river’s mouth, is another type of cat: one of the few dozen ocelots that remain in the wild in the United States. It crouches to drink, its leopard-like spots rippling, then moves to return to the thorn forest where it lives. But, there isn’t much thorn forest left — less than 10 percent of its original coverage, mostly along fence rows, canals and highway right-of-ways that break up the habitat and present threats to these endangered cats.

These two felines, tied together by the lifeline of the mighty river, live in very different environments. Yet, they share a similar difficulty: the shrinking, damage and fragmentation of the forests upon which they each depend. And they share a source of hope — American Forests and others working to restore and reconnect their habitats so they can thrive for years to come.

KEEPING THE CANADA LYNX IN COLORADO 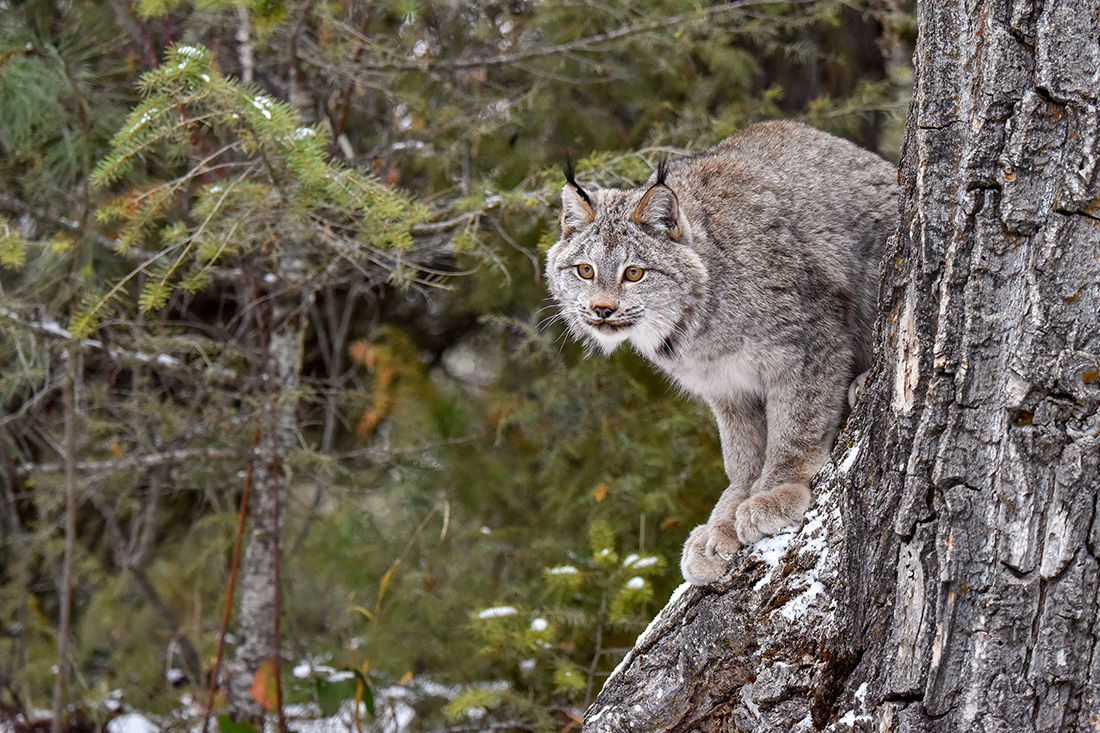 The Canada lynx is characterized by its long, dense fur, triangular ears with black tufts at the tips and broad, snowshoe-like paws. Credit: Adobe.

Canada lynx have long resided in the remote spruce-fir forests of Colorado. They were extirpated completely in the area during the first half of the 20th century, after which Colorado Parks and Wildlife implemented an effort to reintroduce them into the area’s San Juan Mountains. From 1999 to 2006, 218 lynx were captured in Alaska and Canada and released in Colorado, an effort that brought the population in the area from zero to as many as 250 individuals today.

That success doesn’t mean the survival of this federally-listed threatened species in Colorado is assured, however. They need snow, due to their dependence on the snowshoe hare, which thrive in high-altitude spruce forests that are particularly impacted by climate change.

Also, in the early 2000s, drought in the San Juan Mountains created perfect conditions for an outbreak of spruce beetles, which killed more than 98 percent of the mature Engelmann spruce across approximately 600,000 acres of the Rio Grande National Forest. The beetles left only small trees and subalpine fir in their wake, raising concern that reduction in the overstory might affect the habitat of snowshoe hare and secondary prey species.

Then things got worse. In 2013, the West Fork Fire Complex burned almost 80,000 acres at high elevation and killed huge areas of smaller trees and subalpine fir. Michael Tooley, silviculturist for Rio Grande National Forest, says restoration of the spruce forests devastated by the beetles and fire is important for the future of the lynx, as well as other aspects of the forest.

“Our goal is to quickly replant spruce in those areas which could otherwise take as long as 300 years to return to forest cover,” says Tooley. “Not only will this effort promote habitat, it will also help reestablish the carbon storage function of the landscape.” 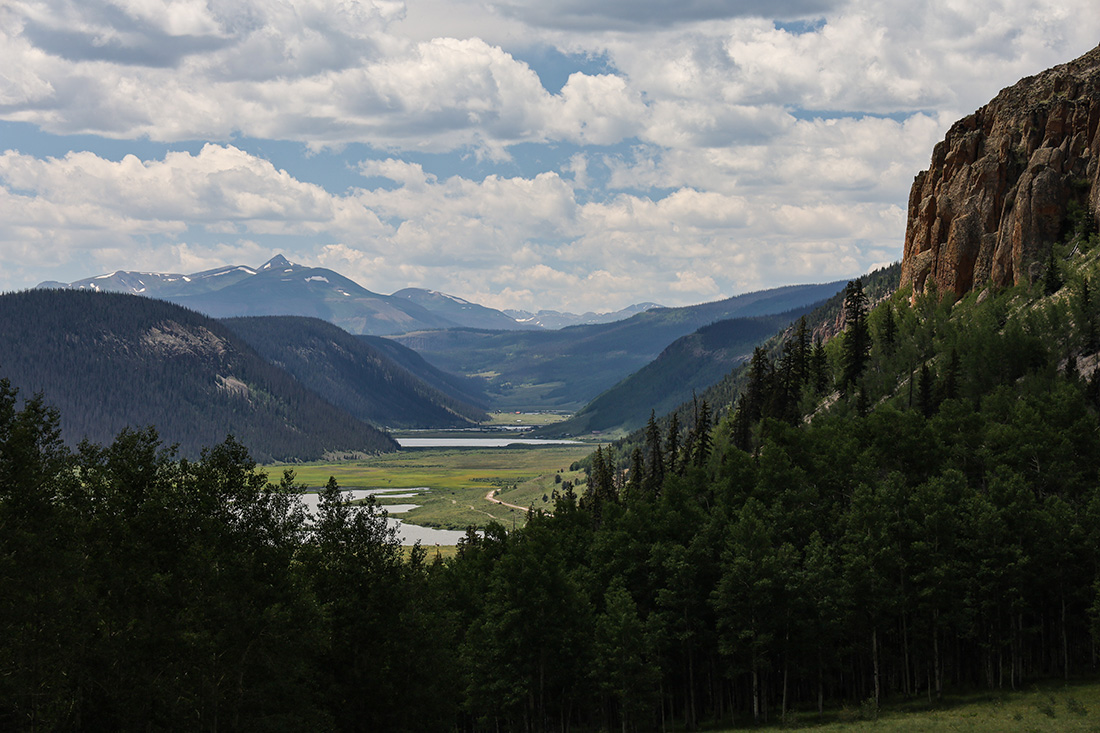 The headwaters of the 1,885-mile long Rio Grande River is in Creede, Colo. Credit: Simon Foot via Flickr.

The priority is to reestablish a conifer seed source and forest cover in burned areas to pro- mote recovery. Since 2015, the U.S. Forest Service and partners, including American Forests, have planted more than 800 acres of spruce trees in the fire zone, where both spruce and aspen were decimated. Forest managers have also certified nearly 1,000 acres of aspen regeneration and continue to look for new areas where planting spruce can help restore forest cover at elevations too high for aspen.

The team will continue to plant selected areas for several more years with the goal of creating a landscape of mixed aspen patches, grass openings and native conifer stands that will provide seeds for forest recovery.

Researchers from the Rocky Mountain Research Station, in cooperation with the Rio Grande National Forest, Colorado Parks and Wildlife and Montana State University, have taken the opportunity to study the question of how the beetle infestation has impacted the lynx.

“Preliminary results are suggesting that lynx are continuing to inhabit, and are doing well in, our spruce-fir forests, where we continue to have a subalpine fir component and a younger age class of spruce-fir in the understory,” says Dale Gomez, a wildlife biologist for Rio Grande National Forest.

The Canada lynx’s continued thriving in Colorado is far from assured, but with restoration work underway, this species may well continue to live happily in this southern reach of its range.

ENABLING THE OCELOT IN TEXAS 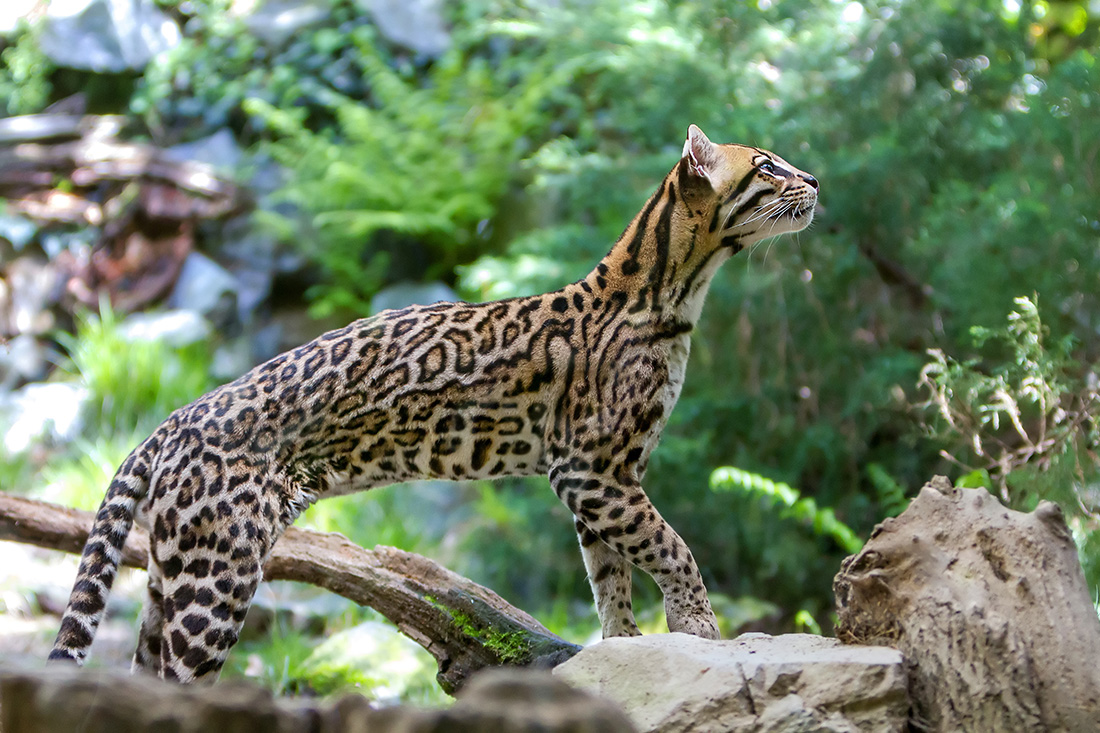 Ocelots’ coat patterns are like fingerprints, which biologists have used to estimate that there are likely only 60 to 100 ocelots living in the Lower Rio Grande Valley. Credit: Elitravo/Adobe.

Almost 2,000 miles south of the charred trunks of the Rio Grande National Forest, ocelots are also dealing with habitat loss and fragmentation. This critically endangered cat is likely to go extinct in the U.S. within 50 years if major changes aren’t made to its habitat, which straddles the Rio Grande River at the Gulf of Mexico.

Ocelots only thrive in extremely dense thorn forest. But over the last century, the original forest has been whittled down — mainly because of development and the expansion of farms and ranches onto forest land — to cover less than 10 percent of the Lower Rio Grande Valley. They now live in isolated islands of habitat, suffering from limited prey and inbreeding. Trying to reach others of their species often results in deadly car-related accidents. Seven animals — almost 10 percent of the U.S. ocelot population — have become roadkill in just the last two years.

Ocelots’ coat patterns are like fingerprints, and over time biologists have identified as many as 55 individuals in South Texas. Based on that number and their dispersal patterns, it’s likely that there are 60 to 100 ocelots now living in the area.

Their long-term survival here depends on the restoration of thorn forest habitat, in particular, prioritization of forest connectivity. The Laguna Atascosa National Wildlife Refuge, run by the U.S. Fish and Wildlife Service (USFWS), has a three-pronged approach for this type of restoration: increasing habitat through land acquisition and restoration, reducing the risk of death on the roads by building safe crossing structures, and boosting genetic diversity by connecting the population or translocating female cats from Mexico. With support from the Wildlife Conservation Society’s Climate Adaptation Fund, American Forests is developing a regional climate adaptation strategy that will complement these long-standing efforts. The hope is that these measures will collectively provide lifelines to this rare animal as drought intensity increases along the U.S.-Mexico border.

“For us, it’s about being strategic in how we handle it,” says Hilary Swarts, a wildlife biologist with the Ocelot Monitoring and Recovery Program at the refuge. “Restoring a patch of thorn forest 20 miles from the nearest occupied habitat is not strategic. When these guys bump into a road, they don’t fare very well.” 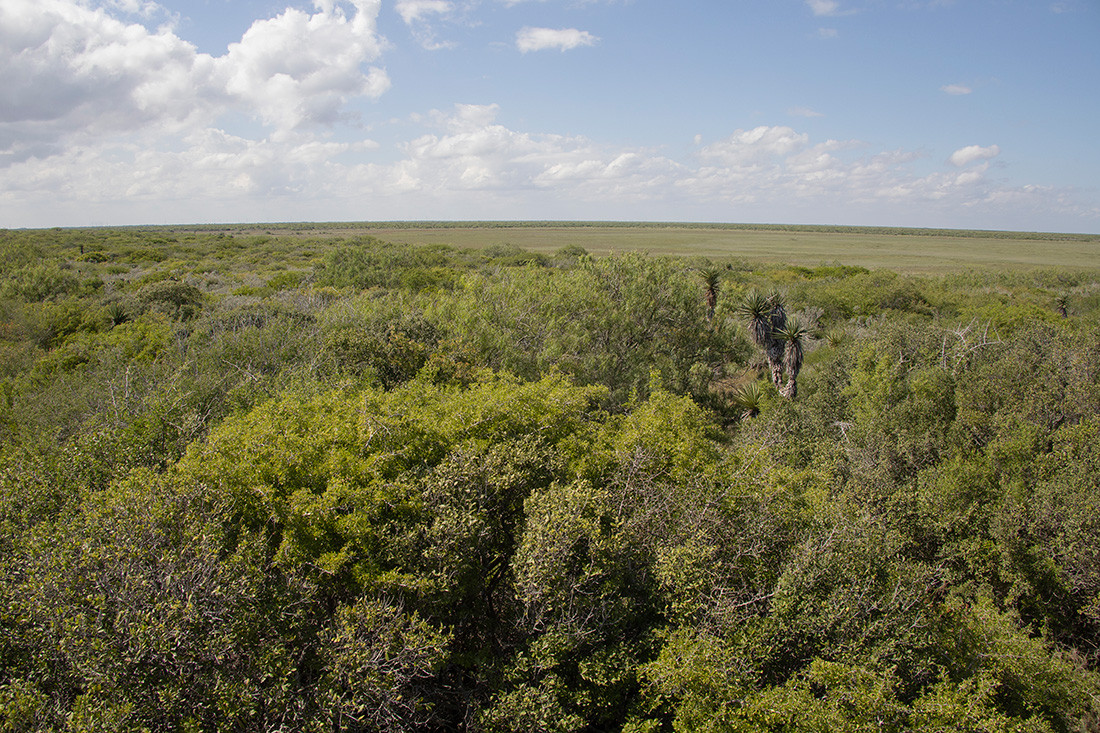 American Forests has partnered with the USFWS to discern where to acquire and restore land so green corridors that connect ocelot habitat can be created.

“You’re looking at a variety of factors,” says Swarts. “Where are ocelots already? Where is there restorable land? Are there landowners in that path- way who are interested in conservation and want to be part of that? It may be that the fastest point from A to B is not a straight line. You’re figuring out the best model fit for the factors you’re considering.”

The project of restoring thorn forest is not a simple exercise of planting trees wherever you can, according to Jon Dale, American Forests’ senior manager in the Lower Rio Grande Valley.

“It’s about analyzing spatial relationships and ocelot distribution on a landscape scale,” says Dale. “The key question is ‘What would move the needle in terms of connectivity?’”

Only a portion of the refuge is ocelot habitat, so even though they’re thriving within its boundaries, they face challenges in the private ranchlands to the north. Ranch practices, such as keeping some portion of land in thorn forest to maintain game, can facilitate ocelot survival. But the connectivity problem still exists: How to ensure ocelots can pass safely from the refuge to the nearest ranchland, and from one ranch to another.

Like the Canada lynx, the ocelot is uniquely habitat-specialized and in dire need of a robust and connected forest home. American Forests and its partners are working aggressively to restore and maintain habitats that will nourish these two cats for generations to come.

Earthkeepers: A Return to His Initial Passion

Learn about the experience that sparked Brian Kittler’s initial passion for forestry and the road that led him to American Forests.