In cities across the country, marginalized communities suffer from a lack of trees. American Forests helps people see that disparity — and turn it around. 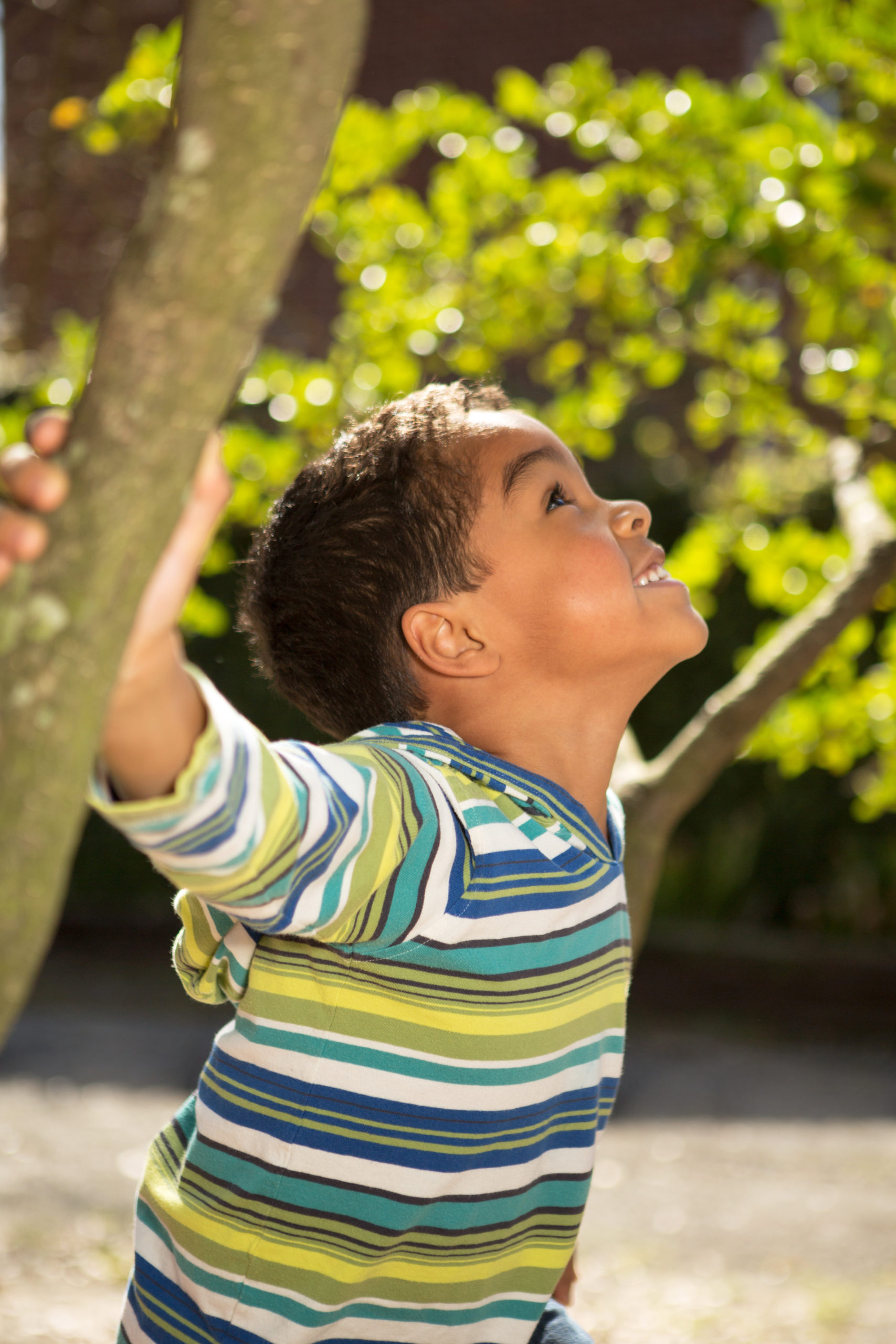 QUINCY JONES knew his neighborhood was going downhill. The 2008 sub-prime mortgage crisis had hit some of Detroit’s neighborhoods with the force of a bomb blast. Several years later, Jones’ community of Osborn — on the east side of the city — still looked gutted.

Those trees led to even more greenery: In 2016, American Forests partnered with the neighborhood, The Greening of Detroit and Bank of America to build the Osborn Outdoor Educational Center — a tree-lined park where there once stood four blighted, abandoned homes. Jones said residents and children go there all the time to enjoy the space, which includes a caterpillar made of tires for kids to play on, a trail, sitting areas, and public art. And he said that all that green has tangibly revitalized Osborn.

Jones intuited something essential but often overlooked in conversations about urban planning: the human need for trees and other natural green things. That need is present even in the concrete hearts of big cities. But it only tends to be met in wealthier urban precincts, and not just in Detroit.

“In most cities in the U.S., you can take a map of trees and a map of income and overlay them, and you’ll almost always see that more trees are in higher-income neighborhoods,” said Sarah Anderson, senior manager of Tree Equity at American Forests. “Lower-income neighbor- hoods don’t have as many.”

This reflects a huge problem, Anderson said, because trees pump benefits into the communities around them. They can lower energy bills and raise property values. They can improve academic performance and air quality. They can protect residents from heat, boost people’s moods, lower crime rates, and create jobs.

They’re infrastructure, in other words, that every human should have access to, regardless of income or race or location. American Forests has coined a term to drive the idea home: Tree Equity.

In cities throughout the U.S., American Forests is partnering with metropolitan and state governments, businesses, nonprofits and neighborhood leaders, like Quincy Jones, to spread awareness of Tree Equity — what it is and the difference it can make for people’s health, finances and career prospects. And block by block, these entities are working together to make it a reality.

Last summer, Matthew May interned for Speak for the Trees, a Boston nonprofit dedicated to improving urban tree canopy. He walked large stretches of the city, logging information about hundreds of individual trees for a city-wide inventory. In lower-income neighborhoods, like Roxbury and Dorchester, he was jarred by how few trees there were — and how hot it was.

“You would walk down a street that could have been a mile long that literally had no trees,” said May, a student at Merrimack College in Boston. “The sun would be 90 degrees out, and there was no shade. But then you would walk down Beacon Street, in the nice part of Boston, and you would be shaded the entire time.”

That shade has health implications. The deadliest extreme weather phenomenon — the one that takes more lives annually than all other natural catastrophes combined — is heat. As the planet continues warming, lower-income areas, whose residents sometimes lack air conditioning, will become even more vulnerable to heat waves. Add enough trees to a block, though, and you can reduce its daytime temperature in the summer by up to 10 degrees.

Besides their cooling capacity, trees provide a myriad of other health benefits: They remove asthma-inducing pollutants from the air, lower the risk of respiratory diseases and skin cancer, and encourage residents to be more active, which can lower obesity rates. On a deeper level, researchers have linked a well-maintained tree canopy to lower stress levels and better psychological wellbeing.

Trees — if they are well-cared for — can also make cities safer by lowering crime levels. They are a sign that people in the neighborhood care about where they live and are more likely to be in tune with their outdoor space, both which are deterrents to potential criminals. However, caring about your neighbor- hood is not always enough. Communities need the means to perform ongoing care and maintenance for their trees. But when achieved, it can create much stronger community ties.

“People in communities tend to walk more and interact more with people on their street,” said Quentin Turner, a community organizer for the Sierra Club’s Detroit branch. “They get to know their neighbors.”

Perhaps more surprisingly, having more trees on your street can also be good for your bank account. They can reduce energy bills, for example. In urban and community areas in the continental U.S., trees save $4.7 billion in electricity use and $3.1 billion in heating use. And they can help prevent costly floods. This might have been the case in Ellicott City, Md., where after healthy tree canopy upstream was removed for development, the downtown was devastated by catastrophic flooding in both 2016 and 2018.

“Trees are very good at capturing stormwater,” said Turner, who manages a variety of green projects that reduce stormwater runoff in Detroit. “Their leaves and branches alone can catch so much rain, and they help bring that water down into the soil,” preventing it from overwhelming storm drains or pouring into people’s basements.

Since people tend to like living near green spaces, trees can also boost property values. Just ask Quincy Jones. Before Osborn gained its new trees and park, houses in the neighborhood “were selling for $15,000, $10,000. People were paying cash,” said Jones. But the greenery has beautified the area, and Jones and several of his friends have started buying and fixing up houses, then creating rent-to-own opportunities that are encouraging people to move back to Osborn. Last August, they sold a renovated house near the park for $55,000.

“We changed the cost in that area,” said Jones. “We’re in the process of doing five more units. And we always use the Outdoor Educational Center .”

The city neighborhoods that need trees the most also tend to be the neighborhoods with the highest unemployment rates. Ask Alex Smith about how trees have helped him, and he’ll talk about his career. In 2012, Smith, a Baltimore native, was trying to turn his life around after being in prison. But finding employment as an ex-convict was an uphill battle. For a while, Smith worked two jobs to make ends meet, sleeping in his car when he was too exhausted to make it home.

Eventually, Smith landed a position with the Baltimore Tree Trust, which works to restore urban forests and strengthen communities throughout the city. He steadily gained experience with the nonprofit and now directs its operations and community outreach. Smith also helped them launch an apprenticeship program in tree care and landscaping techniques. Now, he’s starting his own urban landscaping business to create more opportunities like the one that made such a difference for him.

“I just want my work to translate into more jobs,” Smith said. “We could really have one of the most beautiful green cities in the country because we definitely have the workforce. We just need to tap into it and make that connection.”

The whole country needs to make that connection. In fact, the U.S. Bureau of Labor and Statistics estimates that urban forestry will see a 10 percent increase in job openings for entry-level positions, such as tree trimmers and pruners, over the next decade. If urban forestry groups can find employees within the neighborhoods they’re serving, they’ll be adding not just trees to those areas, but livelihoods.

Lastly, urban trees are a climate tool. By reducing air conditioning use and other energy outputs, they lower greenhouse gas emissions. City trees make up 17 percent of the country’s carbon sink — and could capture even more carbon if cities increase their tree canopy cover. And they shield residents from extreme heat, floods and other weather events linked to climate change. For lower-income communities, which are particularly vulnerable to the impacts of climate change, added protection is critical.

To help cities across the U.S. bring trees and their many benefits to all urban residents, American Forests has adopted a comprehensive, multi-level approach. It’s an approach that aims to transform not only urban forests, but also public perception of them: why they matter and who they’re for.

“We don’t just drop into a community, plant some trees and leave,” said Anderson. “We help with the entire picture.”

That work starts with helping public officials and urban planners simply understand what Tree Equity is and how to achieve it. For example, American Forests has teamed up with the state of Rhode Island to develop a suite of different planning tools and resources that can help all their municipalities work toward Tree Equity. One such tool is the Tree Equity Score, a rubric that combines information about a city’s tree canopy, climate projections and public health data to help focus resources in neighborhoods currently underserved by tree canopy. The methodology for creating a score will be available for use nationwide after it is completed for the Rhode Island project.

In the meantime, city leaders anywhere can use the Vibrant Cities Lab. The platform — which American Forests created with the U.S. Forest Service and National Association of Regional Councils — features such things as action guides, case studies, research and a self-assessment tool to help city planners and others develop and improve their urban forestry programs.

While trees can ultimately save money for cities and their residents, urban forestry programs need more funding to be effective. American Forests is, therefore, helping develop new finance mechanisms such as City Forest Credits.

“This exciting new voluntary carbon market resembles the traditional carbon credit model, where companies and others can mitigate their emissions by purchasing credits,” said Ian Leahy, vice president of urban forestry at American Forests. “Only this time, they’re purchasing credits that can be put toward planting, maintaining and protecting city trees, which research shows have the most impact.”

To that point, these unique “carbon+” credits quantify not just the trees’ carbon storage capacity, but also their ability to trap rain, reduce air pollution and save energy.

On the job front, American Forests is working to make sure that urban forestry programs create career opportunities in the communities they’re serving. American Forests launched a new Career Pathways initiative, for example, with the help of funding from the JPB Foundation and Bank of America. The initiative connects urban forestry job-training programs with tree care employers, facilitating increased matriculation into entry-level jobs like tree trimming and pruning.

And of course, alongside the education, advocacy and career programs American Forests is using to advance Tree Equity, there’s planting actual trees — to the tune of more than a dozen plantings annually in different U.S. cities, such as Miami, Boston and Houston.

Quincy Jones says he’s seen many results spark in Osborn through the green development there — particularly through the Outdoor Educational Center, which has become a place to hold parades, parties and other community activities.

“If you’re thinking about transforming your neighborhood, green space is a good way to start because you can get a lot of engagement,” said Jones. “Because who doesn’t want to see a beautiful community? No matter what the income level is, everybody wants to be around something beautiful and clean.”