Mangroves in the Mist

Straddling both land and sea, mangrove forests are biologically rich coast keepers, providing sanctuary for diverse species, nurseries for marine life, habitat for birds and protection for shorelines. Mangrove forests — wooded, tropical wetlands — buffer the transition from land to sea and offer ecological benefits to both. But over the past few decades, global mangrove forests have been shrinking faster than the scientific community realized.

Satellite images published last year offered the most comprehensive, detailed, global mangrove database to date, showing the total worldwide mangrove area more accurately than ever before: 53,190 square miles, about the size of Arkansas, in the year 2000. That was nearly 12 percent smaller than previously thought. Almost half the world’s old-growth mangrove forests have been lost over the past 50 years, and we’re continuing to lose mangroves at a rate of roughly one percent (about 578 square miles) per year. 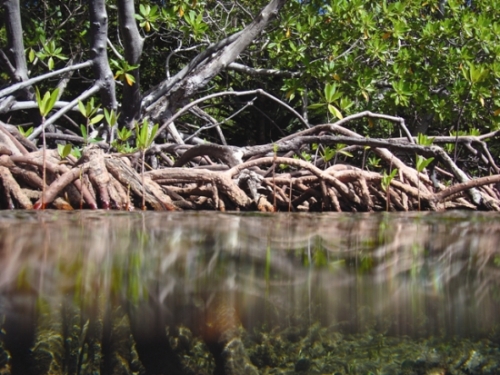 More than a third of the world’s mangroves are believed to have disappeared between 1980 and 2000, mostly due to the rise of industrial shrimp farming and coastal development. In China alone, the last 50 years have seen a 70 percent loss of mangrove forests. In the U.S., protected mangroves along Florida’s coasts and the tip of Louisiana are faring better, with higher protections than mangroves in other countries.

Of the remaining mangroves, only about 6.9 percent are officially protected. This was confirmed by the satellite image study published in 2010, led by scientist Chandra Giri of the U.S. Geological Survey (USGS) Earth Resources Observation and Science Center in South Dakota, whose team studied the images alongside maps of protected areas.

Pressures on mangrove forests come from all angles. On land, human destruction comes in the form of clearcutting for fish farms and filling in for development. From the sea, rising water levels and temperature due to climate change interrupt intertidal processes and expand ranges. To understand the impact that these changes are having on mangrove ecosystems and what their results could be, we first have to understand why these wetland forests are among the most valuable and sensitive ecosystems in the world.

PORTRAIT OF A MANGROVE GROVE

Around the world, mangrove species come in dozens of shapes and sizes, suited to grow in just as many habitats and tide levels. In Florida and the Caribbean, red mangroves form canopied canals over spindly prop roots. In Australia, tiny, knee-high mangrove bushes thrive in arid deserts. While the Western Hemisphere has only eight species, some 60 species grow in the Indo-Pacific region. Asia has the lion’s share with 42 percent of the world’s mangroves, but sizable percentages also grow in Africa, North and Central America, Oceania and South America.

Like other wetlands, people have historically despised mangrove wetlands because of the smell, the mosquitoes and the flies, explains Candy Feller, ecologist at the Smithsonian Environmental Research Center in Edgewater, Maryland. Feller’s affinity for the unusual ecosystems began in the 1970s when, sent to Belize as a scientific illustrator, she fell in love with mangroves. “I’ve always really loved swamps: that wet, really spooky world,” she says.

Despite some of their less appealing qualities, swampy mangrove stands provide valuable ecosystem services. Mangrove prop roots create rich, colorful nurseries for fish and marine life; above, branches offer habitat for birds and other wildlife. Like other types of wetlands, mangroves also slow runoff coming from the land. According to Feller, they act as a sieve for the sediments and as a scrubber for the nutrients that can destroy coral and sea grass beds.

Mangroves can also act as a buffer from intense storms by absorbing some of the wave energy of tsunamis, hurricanes and storm surges. Many realized the importance of mangroves after the 2004 Southeast Asia tsunami, which devastated coastal communities, killing more than 225,000 and displacing close to a million people. Because so many old-growth mangrove forests had been leveled in the area, waves encountered no resistance and caused more damage than if there had been a healthy mangrove coastline.

Lastly, mangroves may be among the most productive forests on Earth, sequestering carbon at a higher rate than other types of forest. A 2011 study by scientists with the USDA Forest Service, the University of Helsinki and the Center for International Forestry Research found that mangroves can store as much as five times more carbon than other types of forests, including tropical rainforests. 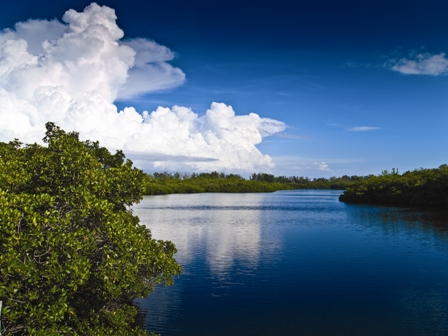 “Our study was a systematic study using satellite data for the year 2000,” explains Giri, whereas earlier estimates were based on a wide variety of old and new data collected from individual countries by the Food and Agriculture Organization of the United Nations. Some countries had complete, accurate data while data from others was incomplete or vague. Some of the previous data revealed only the land area of mangroves and not where they grew spatially. The satellite images allowed the team to create a far more comprehensive picture.

In the decade since the images were taken, the total area of mangroves has diminished even further, a fact confirmed by studies, the vast amounts of new shrimp farms cropping up and even anecdotal accounts. While Giri, who is originally from Nepal, was completing his master’s and doctorate in Thailand, he saw mangroves disappear rapidly to aquaculture and farming; the new farms would often be abandoned after two or three years as they became less productive. “It’s very hard to grow anything on that land — it’s acidic,” Giri says. “I witnessed that when I was a grad student and said ‘I need to do something.’”

Industrial shrimp farming — the number one cause of mangrove loss — exploded in the late 1970s and ’80s. “Mostly in Southeast Asia, the coastal areas of these countries have been carved up into farms,” Feller says, though Latin American countries also have extensive shrimp farming.

Mangroves also occupy prime waterfront real estate — land that developers covet for resorts, vacation homes and coastal destinations. Since mangroves accumulate peat — networks of fine root systems — developers must fill in the cleared area with sediment, often pumped in from ocean reef areas, which further contributes to the breakdown of the original ecosystem.

In mid-20th-century Florida, many mangrove wetlands were impounded and flooded to control mosquitoes. “It killed the mangroves because they need a fluctuating water level,” Feller says. At one site, a late-1970s hurricane blew a hole in the berm, which was later opened to allow normal tidal exchange, and the red mangroves returned. But rising waters in the last 60 years — about two millimeters a year, totaling 12 centimeters over the last 60 years — means a smaller area for mangroves as they return to the site.

“In a mangrove swamp, 12 centimeters is a lot of sea level rise,” says Feller, whose team recently won a grant from NASA and The National Science Foundation to investigate how mangroves are responding to climate change.

Around the world, climate change is re-drawing the lines of where mangroves can survive. As sea levels rise, mangroves will naturally move upland, if they have the space, explains Alfredo Quarto of the Mangrove Action Project. Buffer zones have been taken over by roads, buildings and other developments, so mangrove forests have nowhere to retreat. “They’re really between a rock and a hard place, in a sense,” Quarto says.

In addition to retreating upland, mangroves are migrating as growing zones shift northward. Researchers at the Smithsonian Environmental Research Center are tracking more than 100 miles of Florida coastline, where mangrove trees are gaining a foothold in salt marshes to the north. The typical transition from tropical mangrove to temperate salt marsh is at about 30 degrees latitude in both the Northern and Southern Hemispheres; in the Northern Hemisphere, that’s around St. Augustine in Florida. At that 30-degree latitude, mangroves and salt marshes intermingle in about a two-degree latitudinal band.

“As the climate is warming, the conditions are such that these little plants can get there and get established,” says Feller, who has noticed young mangroves taking hold north of St. Augustine. Some of these northward-drifting mangroves are becoming established enough to survive killing frosts.

In her office, Feller points to a photo taken at Merritt Island National Wildlife Refuge (near Cape Canaveral) of a sign that illustrates only salt marsh species. “Now, about 50 percent of what you see is mangrove,” she says, a change that has happened since the sign was created. “It’s happening faster than I think people realize.”

Exactly how climate change will affect mangroves is a question that researchers are working to understand. “We know it’s happening,” Feller says, “but how will it affect the fish or nutri­ent cycling or the ability to protect shorelines from wave energy?”

HOPE ON THE HORIZON

With mangroves under fire, our best bet is to try to conserve what we have left, says Quarto. Countries could better enforce conservation in protected intertidal zones and preserve currently unprotected areas.

Among the best things that individuals can do to preserve mangrove forests around the world is to eat fewer imported shrimp. “With less consumption, there’s less expansion of the industry,” Quarto says. If you’re going to eat shrimp, he advises, buy homegrown shrimp from Louisiana and Alaska, rather than imported shrimp, which also tend to be loaded with antibiotics.

While protecting existing mangroves, we can also restore mangrove forests, which will yield the bonus benefit of restoring ocean health — including fisheries and coral reefs — by improving water quality from runoff. But it’s important to remember that mangrove ecosystems must be restored in the right way, taking into account the area’s freshwater hydrology, ecology and land forms and planting a diverse variety of appropriate, native species. Any successful mangrove restoration project must consider incoming freshwater sources and flow and their balance with the nearby sea.

Carrie Madren writes from Great Falls, Virginia, and can be reached at camadren@gmail.com.

Working with the Putian Green Sprout Coastal Wetlands Research Center in China, American Forests Global ReLeaf has planted more than 600,000 mangrove seedlings in a number of critical sites on the Chinese coast. To these coastal communities, mangroves represent environmental health, inland safety from storms, habitat for migratory birds and economic stability for the local fishermen that rely on the rich variety of aquatic life supported within the mangroves’ underwater root system. Unfortunately, over the past 50 years, 70 percent of China’s mangrove forests have been lost, making restoration projects like this one all the more vital to coastal ecosystems and communities.

In addition to planting seedlings, the project raised public awareness of the importance of mangrove ecosystems to the health of the local community. Working with local partners, we organized an educational workshop on mangrove ecosystems and reached out to 10 different schools in the region. A number of students took part in the program, even volunteering to take part in the planting itself.

Learn how you can support Global ReLeaf projects like this at www.AmericanForests.org/ways-to-give.