The work of Moscow-based photographer Alexey Kljatov is featured in the Winter 2015 issue of American Forests as the “Last Look.” Now, he gives a new meaning to our web-exclusive column’s name. His work is about as “close up” as you can get: macro images of snowflakes, each one unique, each a testament to the minute complexity of nature.

When and why did you become a nature photographer?

My mother is a photography enthusiast, and I learned a lot about photography from her. At first, it was the basics of film SLR cameras. We used mostly Zenit cameras, which were very popular in the Soviet Union. Later, when the digital era began, I started using the Casio QV-3000 and was impressed by its ability to capture a tiny world, almost unseen by the naked eye.

Why snowflakes, in particular?

Like many beginners, I started photography with flowers and ladybugs and didn’t even think of trying anything else for several years. But one day, I saw two shots of snowflakes on the internet (unfortunately, I do not remember the photographer’s name) and was amazed by their cold, crystal-like beauty. The following winter, I started shooting snowflakes. In the beginning, I made many mistakes. My early snowflake shots were terrible, but I was happy, because I was seeing snowflake shapes and patterns, which hadn’t seen before.

What was the most difficult image you ever tried to capture? 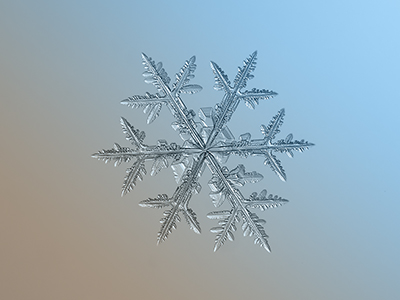 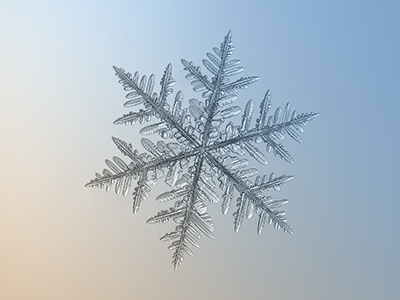 Among all my snowflake photos, the ones that are the biggest headache to process are the huge, fernlike dendrite crystals, like those shown above. This is because I make several masks to remove noise, and masks for these snowflakes are really big and complex.

Your mother also photographs snowflakes. Would you say it runs in the family? Do you work on your photography together?

My mom became interested in snowflake photography after my very first efforts, and we often shoot together, using almost identical techniques. The biggest difference between our photos is that my mother does quick processing, rarely spending more than 10 minutes on a photo, while I spend several hours of work per photo trying to create a composite image of maximum quality out of several individual shots.

Do you have a favorite photo?

Among my earlier snowflake photos, my favorite is “Darkside,” which appears in American Forests Vol. 121, No. 1. Some people say they see the Imperial Crest from the Star Wars movies at its center, and I named it for this reason. Among my more recent snowflake photos, it’s difficult to choose a favorite. Maybe, the 12-sided crystal image I call “12 months” is the most intriguing from last winter’s series.

Please tell us a little bit about your technique.

My technique is very inexpensive. I shoot my snowflake pictures on the open balcony of our house using two methods. The first is dark shots with bright snowflakes taken in natural light, using dark gray woolen fabric as a background. I place this fabric on a stool and wait for a good crystal to fall on it, then start shooting. I shoot at angle using a small desktop tripod.

The second method is shooting the snowflake on a backlit glass surface. For this, I turn the stool upside down on the balcony and place a large sheet of glass across the legs to create a surface. Unlike the darker shots, I shoot these vertically from above, not at an angle. In order to set the camera up for this without any shaking, I created a simple tool. From a small plastic bottle I cut out a cylinder that fits over the camera’s lens to a length that allows the lens to rest 1 centimeter above the glass, the minimum focusing distance of my camera in macro mode. When snowflakes falls on the glass, I just place this tube with the camera inserted over the snowflake and shoot with a 2-second delay, which allows me to remove my hands from camera. Then, I light the snowflake from beneath the glass with a simple LED flashlight. This light is strong enough for shooting even at night. I try to light at an angle to give the crystal more dark and light detail and contours.

Two years ago, instead of single shots of each snowflake, I started to take short series (usually 8-10 shots, sometimes more) of identical shots of each crystal. These shots can then be averaged and merged into one picture, greatly lowering noise and revealing small and subtle crystal details which no single shot reveals on its own. Shooting is easy, but processing of picture takes significant time.

When I started, I was shooting snowflakes with just a camera, without any add-ons. The final resolution of the pictures I shot this way varies from 640 x 480 pixels to about 1024 x 768. This is enough for posting online or making collages, but not for prints. Recently, I began using a simple home-made optical add-on for my camera which allows for higher resolutions for print. You can read more about this method on my blog.

Which other photographers do you admire?

Of course, Wilson Bentley, the pioneer of snowflake photography, who dedicated his life to this craft.

Also, I admire the work of Kenneth G. Libbrecht, professor of physics and excellent snowflake photographer. In addition to taking photos of natural snowflakes, he also grows artificial snowflakes in a laboratory, and they look absolutely fantastic!

Don Komarechka is a wonderful Canadian snowflake photographer who recently published a great book about snowflake physics and photography. Not only do his snowflake photos reveal amazing details, but he also explains how each one formed with its particular shape and features.

See more snowflake photography from Alexey Kljatov below and read more on his blog, The Keys to December. 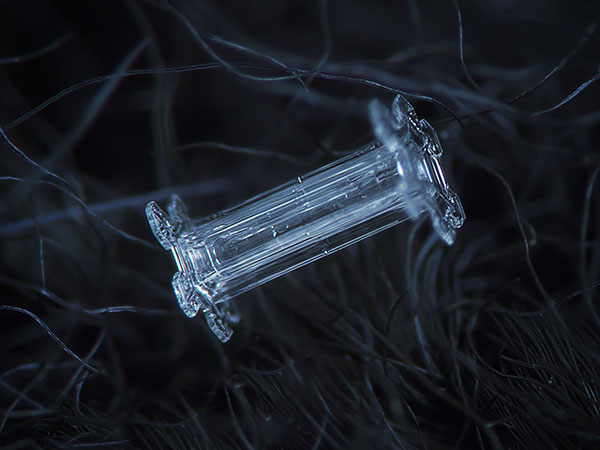 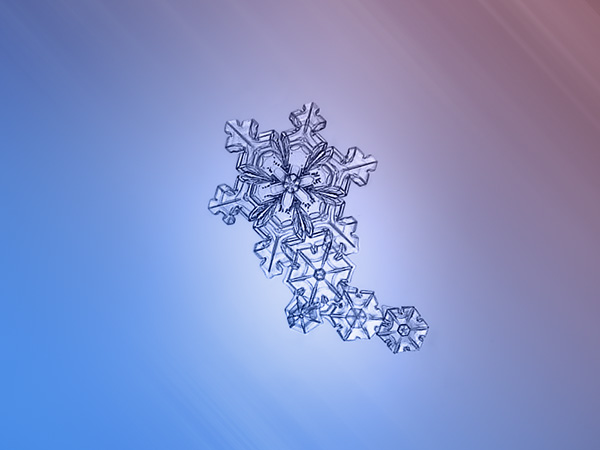 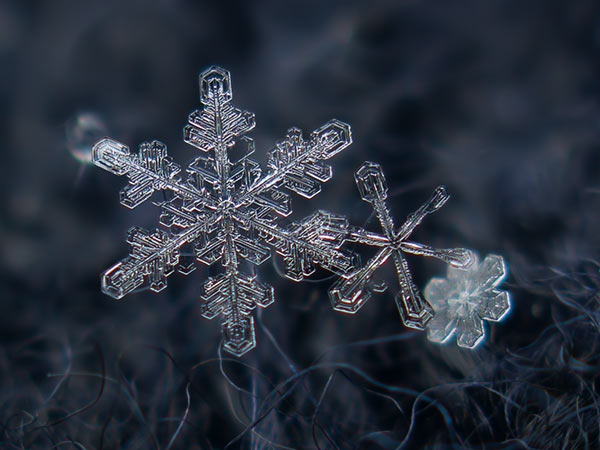 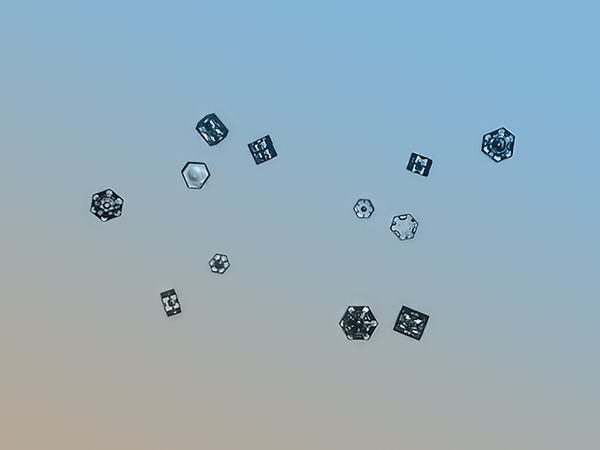 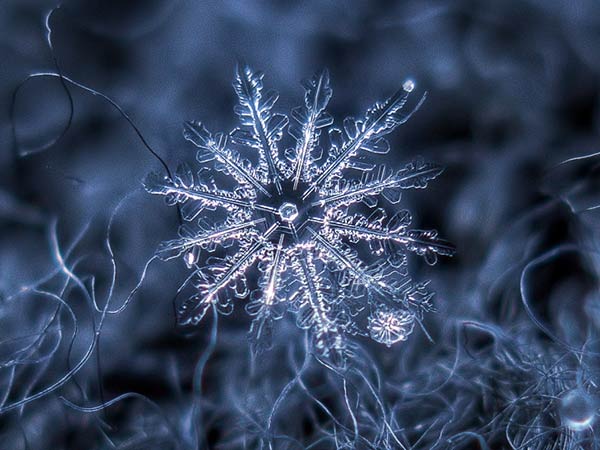 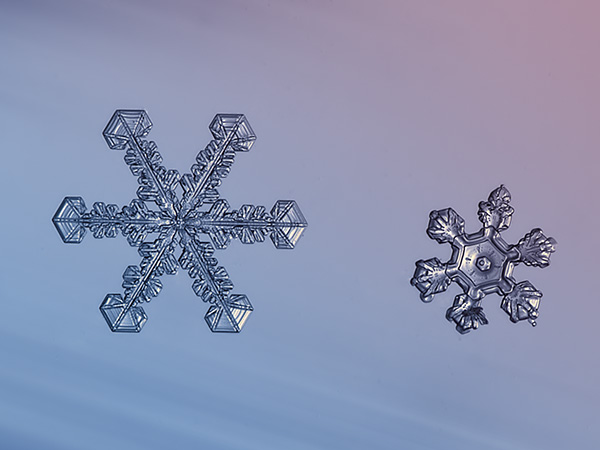