Home/Beauty of the Bosque

Beauty of the Bosque 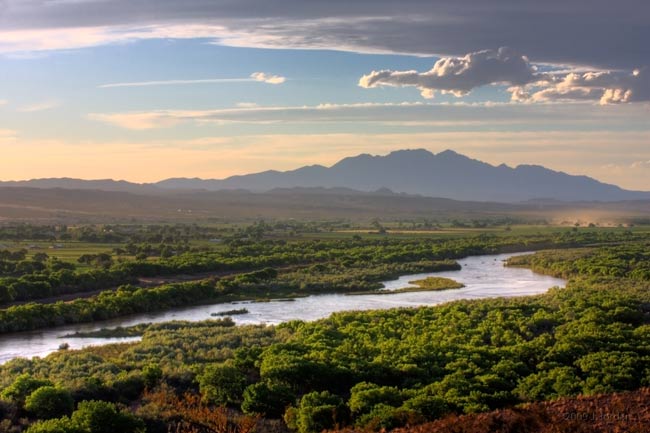 By Ruth A. Wilson

Bosque — Spanish for woods — was one of the first new words I learned after moving from the rainforest of Olympia, Wash., to the desert of Albuquerque, N.M. I discovered this word — and an entirely new idea about what constitutes a forest — on my first visit to Rio Grande Valley State Park, where the bosque is dominant. A bosque ecosystem encompasses a riparian forest and floodplains that surround a river. In the U.S., this type of ecosystem is found almost exclusively in the arid Southwest, mostly along the Rio Grande.

Jodi Hedderig, manager of the Open Space Visitor Center, describes the area’s bosque as “a forest supported by a riparian environment — in the desert.” The Rio Grande, flowing through the center of the bosque, sustains this forested oasis, as the river and woodland combine to become one riparian ecosystem. The combination makes the bosque a haven for an unusual variety of flora and fauna that rely on both the river and the forest. 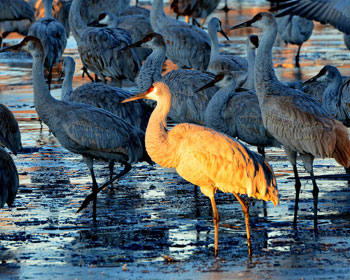 A recently published field guide lists more than 500 different species of animals living in New Mexico’s bosque. While many of the animals are difficult to see — such as bats due to their nocturnal nature — others are frequently encountered on walks through the woods, including desert cottontails, rock squirrels, muskrats, porcupines and coyotes. The American beaver is another bosque resident. This aquatic rodent’s diet consists primarily of the cambial tissue under the bark of cottonwood and willow growing in the woodland. Walking through the bosque, gnawed tree trunks and stripped bark provide clear evidence of beaver activity. Along the river, beaver tracks can be found in the mud and burrows in the bank.

Hedderig explains that the bosque also is an excellent migration route, providing food, shelter and water for large numbers of ducks, geese, sandhill cranes and a host of other migratory birds. Many of these birds, like herons and egrets, are wading birds and not typically found in forests.

The cottonwood trees, with heart- or triangular-shaped leaves, are sometimes referred to as the heart of the bosque, as they provide critical habitat for many of the birds, mammals, insects, spiders and crustaceans of the riparian ecosystem. Resident birds of the bosque include Cooper’s hawk, red-tailed hawk, American kestrel, roadrunner and a variety of hummingbirds, woodpeckers and owls. Porcupines rest high in the branches of cottonwood trees, and toads seek shelter in the leaf litter on the forest floor.

The Importance of Cottonwood

Rio Grande cottonwoods have been growing in the bosque for more than a million years and are heavily dependent on a reliable water supply for germination and survival. Rio Grande cottonwoods reproduce by seeding. Cottonwood seeds, carried by downy white tufts, are easily dispersed long distances by wind or water. For germination, they need bare soil, moisture and plenty of sunshine. Cottonwoods flower in the spring before their leaves come out, around the same time that spring rains cause the river to flood over its banks, which creates open, muddy flats where seeds can germinate and establish seedlings.

Today, the cottonwoods and the bosque ecosystem that depends on them face serious threats to their survival. Farming, river-control projects and urban development have dramatically decreased the water supply, seriously compromising the health of the bosque. Beginning in the 1950s, thousands of jetty jacks — large, steel, cross-like structures — were installed by the U.S. Army Corps of Engineers to trap sediments and stabilize riverbanks in times of flooding. These jacks, along with conveyance channels, levees and dams, changed the Rio Grande from a meandering, free-flowing stream to a highly modified water storage and transportation system. Several irrigation ditches, along with water gates and frames, are visible from the walking paths in the Rio Grande bosque.

With these changes to the river came dramatic changes for the entire forest and ecosystem. Deprived of the floods that spread their seeds, the cottonwood trees cannot to regenerate naturally. As older cottonwoods die, holes are left in the canopy, and the ecosystem has no new trees to fill them. 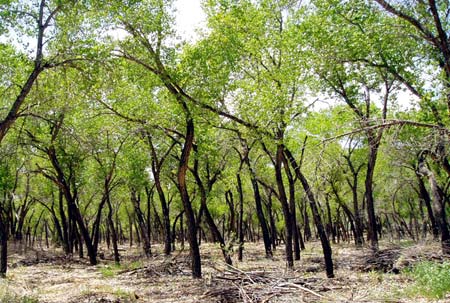 With changes in water management threatening the bosque, people have been working to protect it for many years. Aldo Leopold, who served as a forest manager in New Mexico for a period of time, was one of the first to develop a philosophy of management focusing on preservation, instead of the more common emphasis on utilization. Leopold once said, “A thing is right when it tends to preserve the integrity, stability and beauty of the biotic community. It is wrong when it tends otherwise.” A part of the bosque — now designated as Aldo Leopold Forest — honors Leopold’s legacy in New Mexico by promoting his vision of an ethical relationship with the land.

Today, concerned people and organizations have initiated a number of programs to monitor and protect the beauty and integrity of the bosque. The Open Space Division plants thousands of cottonwoods and other native bosque trees and shrubs each year in an effort to replace the aging forest and reclaim burned areas. A similar initiative can be found in the Bosque Ecosystem Monitoring Program, a joint effort coordinated by the University of New Mexico and Bosque School. Bosque School, a college preparatory school for grades six through 12, is surrounded by the riparian forest and provides students many opportunities to study and gather data related to the overall condition of the bosque. 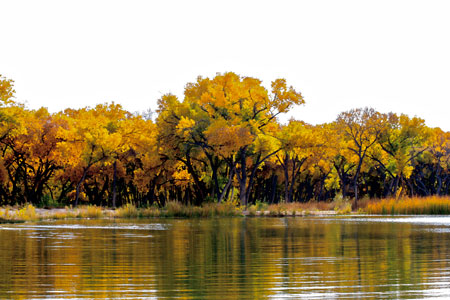 The U.S. Forest Service is developing another education program, where 20 acres of forestland along the Rio Grande will become the Children’s Bosque, a place where elementary children will have the opportunity to hike on trails through the cottonwood forest, climb onto an elevated fort and observe the different plants and animals of the riparian ecosystem. Through restoration and education programs like these, we can hope that appreciation for the bosque as a rare and valuable ecosystem will spread, and more steps will be taken toward preserving it.

Walking trails from the Open Space Visitor Center took me into the bosque and along the riverbanks of the Rio Grande. I didn’t realize, at first, that I was walking through a forest, as my understanding of the term was a densely wooded area with mosses, ferns, grasses and vines. I saw nothing like this as I entered the bosque. What I saw were aging cottonwood trees with very little understory. Instead of ferns and grasses, the ground was sandy and covered by a layer of dead branches, dried leaves and woody debris. But regardless of its appearance, the bosque offers many of the same opportunities as other forests throughout the country.

The part of the bosque that lies within the city of Albuquerque is almost exclusively designated as a nature reserve or education and recreation area. The Paseo del Bosque Trail provides bikers and walkers with a scenic 16-mile paved path through the forest. Other unpaved trails on both sides of the river are used frequently by hikers, horse or bike riders and bird watchers.

While the bosque offers many opportunities for recreation and education, people also find inspiration in it. Responses to a recent invitation by the Open Space Division to submit original haikus reflect strong emotional connections to the bosque. More than 200 submissions in 2012 included the following haiku by Lee Mann, a volunteer at the Open Space Visitor Center:

Bosque trails beckon
The way to thoughtful silence
Our sanctuary

Ruth Wilson writes from Albuquerque, New Mexico, and can be reached at wilson.rutha@gmail.com.