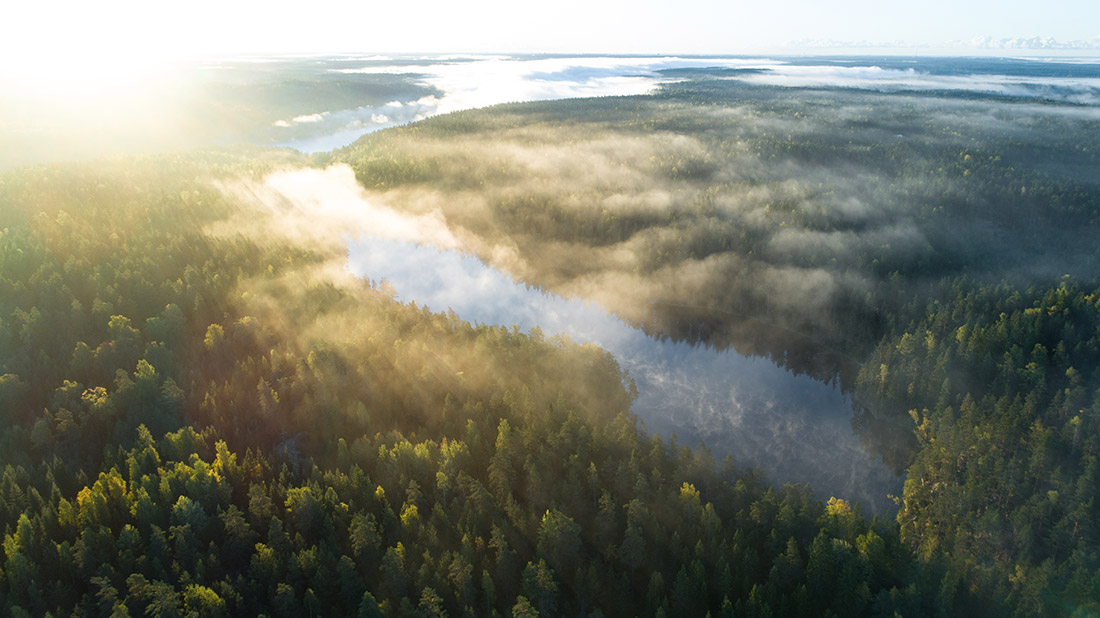 Stored within our lands are massive amounts of carbon. Without that ecological service, Earth’s climate would be too hot for life to survive.

The nation’s forests, farms, grasslands and wetlands are valued for many things: resources, recreation, scenic beauty, food. But they also hold an invisible asset that the world could not live without. These lands store massive amounts of carbon and add to those stores each year through the natural process of carbon sequestration. Without that ecological service, Earth’s climate would be too hot for life to survive.

And yet, the importance of conserving and restoring natural and working lands tokeep carbon in the ground and in the trees — and sequester more of it through restoration and reforestation — is often left out of the public conversation about slowing climate change. Climate policies tend to focus on tamping down fossil fuel emissions and overhaul- ing our energy systems to run on renewables like wind and solar. But under the right management, forests, wetlands and other vegetation, as well as soils, have the capacity to pull even more carbon out of the air. When lands are deforested and wetlands are drained, or the health of those natural systems declines, the carbon they held is released into the atmosphere, worsening climate change.

“The need to reduce CO2 means that natural solutions to the climate need to be part of the equation,” says David Hayes, former Deputy Secretary of the Interior under President Barack Obama and an environmental law professor at New York University. A recent study by The Nature Conservancy estimated as much as 32 percent of all U.S. greenhouse gas (GHG) emissions could be offset by the land sector.

As studies like this one multiply, and conservationists push to elevate the role of terra firma in climate change policies, state governments are beginning to include land protection and restoration in their climate initiatives.

“I really think that working in forests and other land types is the next frontier for how to address climate change successfully,” says Laurie Wayburn, executive director of the Pacific Forest Trust, a California organization that has worked with state officials and private landowners to conserve carbon stocks in forests.

While all types of vegetation, as well as soils, sequester carbon, forests are the most powerful in slowing climate change, providing more than 90 percent of the natural carbon capture in U.S. lands. 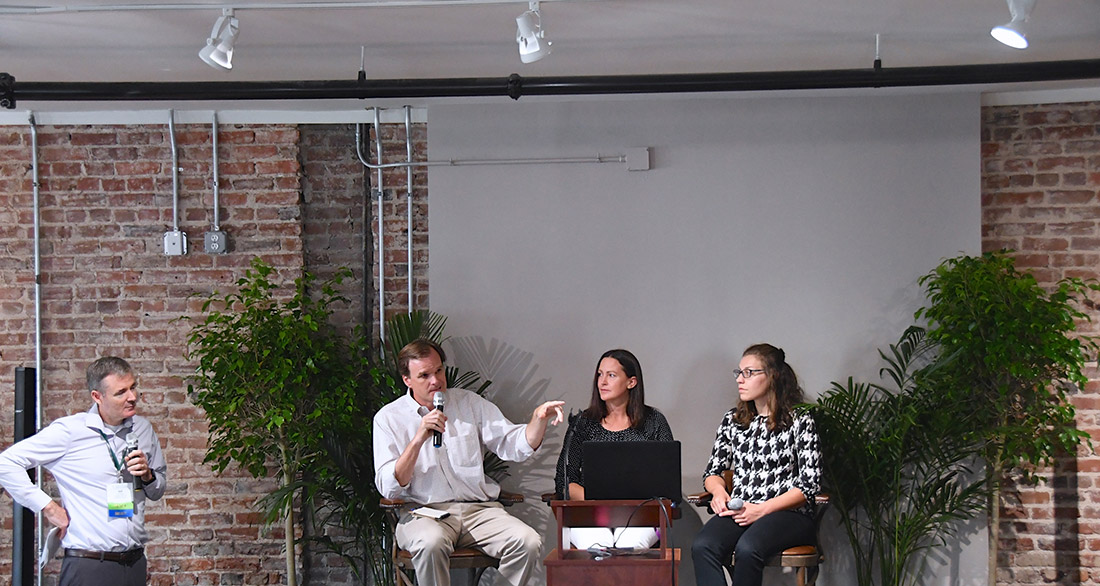 “Right now, here in the U.S., our forests and forest products are capturing and storing almost 15 percent of our carbon emissions,” says American Forests President and CEO, Jad Daley. “So, there’s a huge current role that our forests are playing, and states can’t be successful in achieving their climate goals if they don’t take steps to maintain and even increase this natural climate protection from forests.”

In recent years, states have come together to devise ways to protect and enhance natural carbon stocks as part of their climate efforts. Most notably, in the wake of President Donald Trump’s decision in 2017 to withdraw the U.S. from the Paris climate accord, Governors Jerry Brown of California, Andrew Cuomo of New York, and Jay Inslee of Washington created the U.S. Climate Alliance to unite states committed to meeting their share of the nation’s emission reduction target as a contribution to the Paris agreement. Other states soon joined, and today 25 governors are Climate Alliance members. This includes several new states, including New Mexico and Nevada, which came aboard after the 2018 elections ushered in new, climate-minded governors.

The Alliance, which represents 55 percent of the U.S. population and 40 percent of the nation’s emissions, aims to tamp down climate change pollution by at least 26 to 28 percent below 2005 levels by 2025. Working together, according to Claire Jahns, senior advisor to the U.S. Climate Alliance on Natural and Working Lands, helps states accomplish their climate objectives more easily and efficiently.

“By coming together, the states are able to share policy approaches and use the Alliance as a vehicle to learn from one another,” says Jahns. 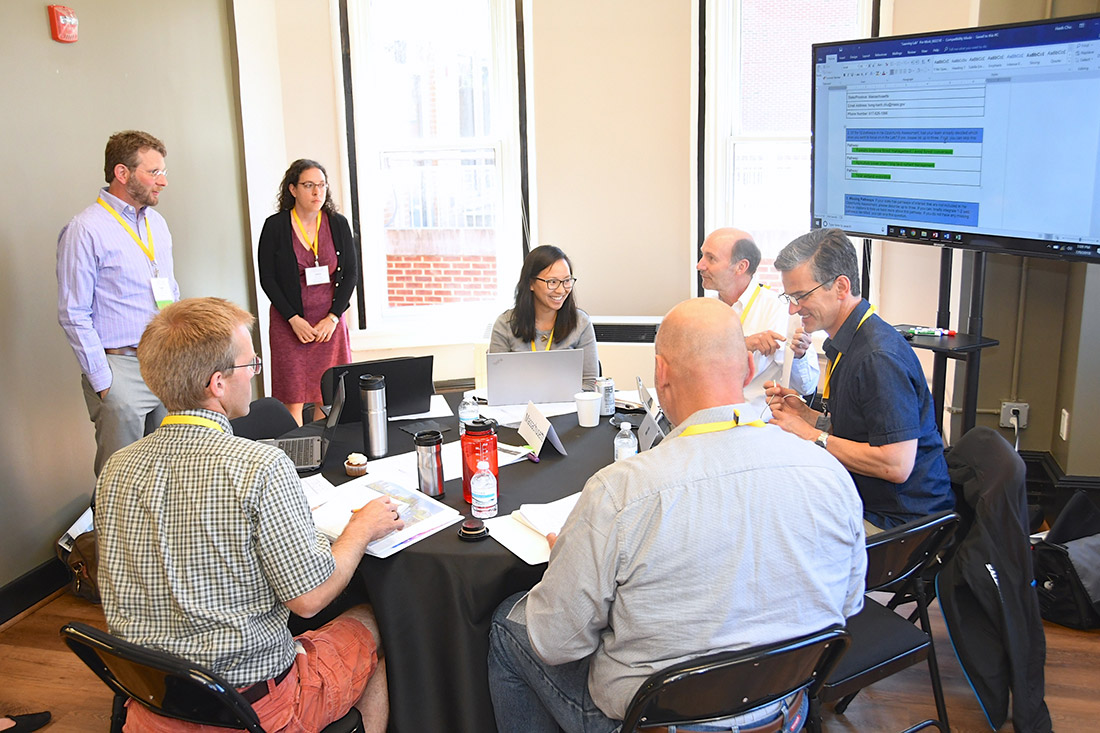 For example, a U.S. Climate Alliance initiative aims to share tools and data among member states to improve GHG emission inventories, providing a more accurate accounting of climate pollution from every sector, including land use.

“It really gives states a forum to learn about alter- native methods for quantifying those aspects of the GHG portfolio that haven’t historically received a lot of attention, like land use and short-lived climate pollutants,” Jahns says.

As part of the Alliance’s “Natural and Working Lands Challenge,” launched in 2018, participating states are exploring a host of strategies for increasing the power of land to slow climate change: boosting carbon sequestration in forests and forest products; protecting natural and working lands from development; reducing carbon losses from wildfire; restoring coastal wetlands and expanding urban forests and other types of greenspace.

But what works in one state may not work as well in another.

“In Massachusetts, the biggest strategy might be to conserve the forest we have now and improve the management of their forests for the purpose of sequestering more carbon,” says Linda Orel, a Boston-based senior conservation finance director for The Trust for Public Land. “In other states, they might be looking more at farms and grasslands. Then, they have to pass policies and fund them.” 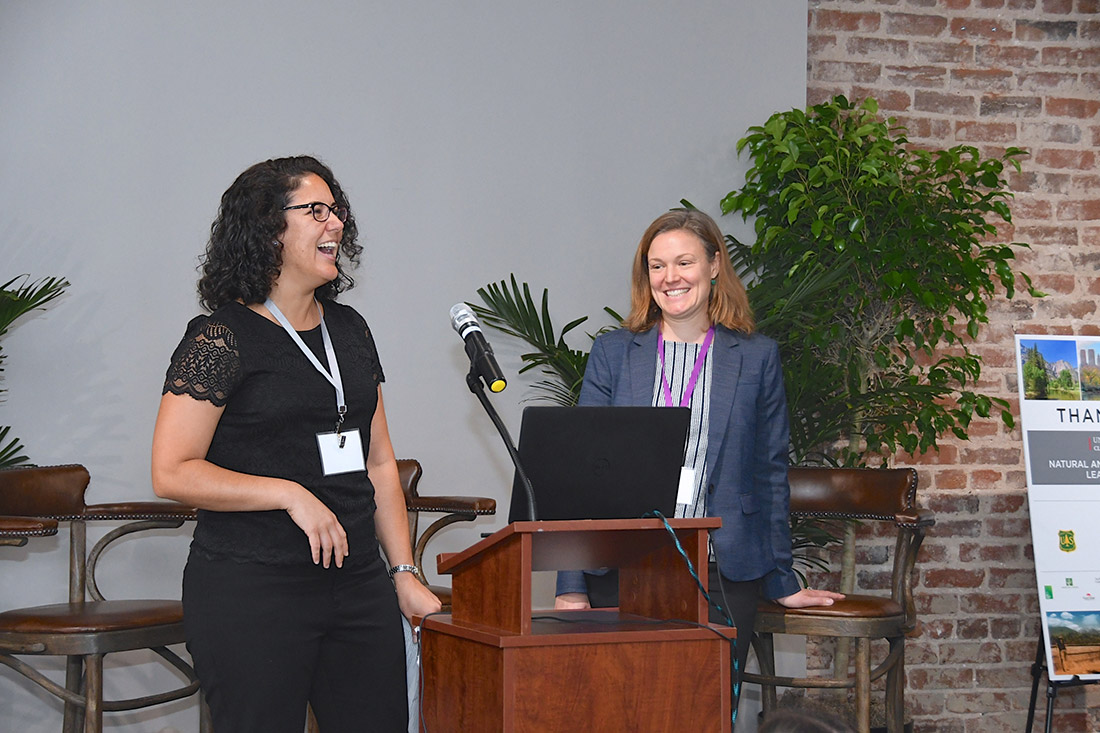 To help these states more efficiently tap into the expertise of NGOs, academics and federal agencies, like the U.S. Forest Service, American Forests held a three-day Learning Lab in the summer of 2018 that brought together the NGO “USCA Impact Partners” and other technical experts with state officials and stakeholders. This event helped Alliance states, numbering 17 at the time, to figure out which land sector strategies would be most effective for each of them, and to share best practices. Since then, the states have begun to develop — and in some cases even adopt — new policies and legislative proposals that will help ensure carbon stores are protected and enhanced.

For example, in Rhode Island, the Rhode Island Department of Environmental Management, and other state agencies, are working with American Forests and other partners to implement a bold urban forest strategy focused on first identifying the best tree types and locations to plant — particularly in low-income neighbor-hoods — to draw more carbon out of the air while improving public health and reducing energy use through natural cooling. That pilot project, just getting underway, will be implemented through tree planting across all of Rhode Island’s municipalities, and serve as a model for other states.

In New York, Governor Andrew Cuomo recently signed into law a bill that calls for reaching a net-zero carbon economy by 2050, in part through an emissions offset program that boosts restoration of forests and salt marshes. And in New Mexico, one of the newest alliance members, Governor Michelle Lujan Grisham’s administration is crafting plans to enhance forest and grassland restoration on state lands as part of its climate change strategy.

California — the first state to include forests in its climate efforts — has been a pioneer in protecting and boosting its carbon stores, and many states are looking at its work in developing their own initiatives. The state has made expanding urban forests a priority and uses funds paid by polluters into its carbon market to invest in forest restoration and reducing the risk of carbon-releasing wildfires. California has also set goals for increasing state-funded soil conservation, forest management and the restoration of forests, riparian areas, wetlands and seagrass beds.

In Washington State, officials are undertaking a number of initiatives to protect and enhance forest resiliency, including restoring forests, working with local governments to prevent deforestation from urban development, and researching how to manage forests in a way that helps them withstand severe wildfires.

Maryland, where efforts to supercharge carbon sequestration have been underway for several years, has exceeded its initial targets of planting 30,000 acres of new forest and is on track to reach 45,000 acres by 2020. Now, Maryland is expanding urban tree canopy and programs to restore wetlands and work with farmers to conserve agricultural land and sequester carbon. The Department of Agriculture’s Healthy Biomass program, for example, encourages farmers to plant cover crops that increase carbon storage in soils.

Crucially, officials are also doubling down on measuring the state’s carbon sources and sinks to get a better understanding of what more needs to be done. The state was one of the first to participate in NASA and the University of Maryland’s global carbon monitoring system, and natural resource managers are now using those insights to work out how state actions affect carbon sequestration. For example, watershed restoration efforts undertaken as part of Maryland’s commitment to improving water quality in the Chesapeake Bay may have the added benefit of enhancing carbon stocks. 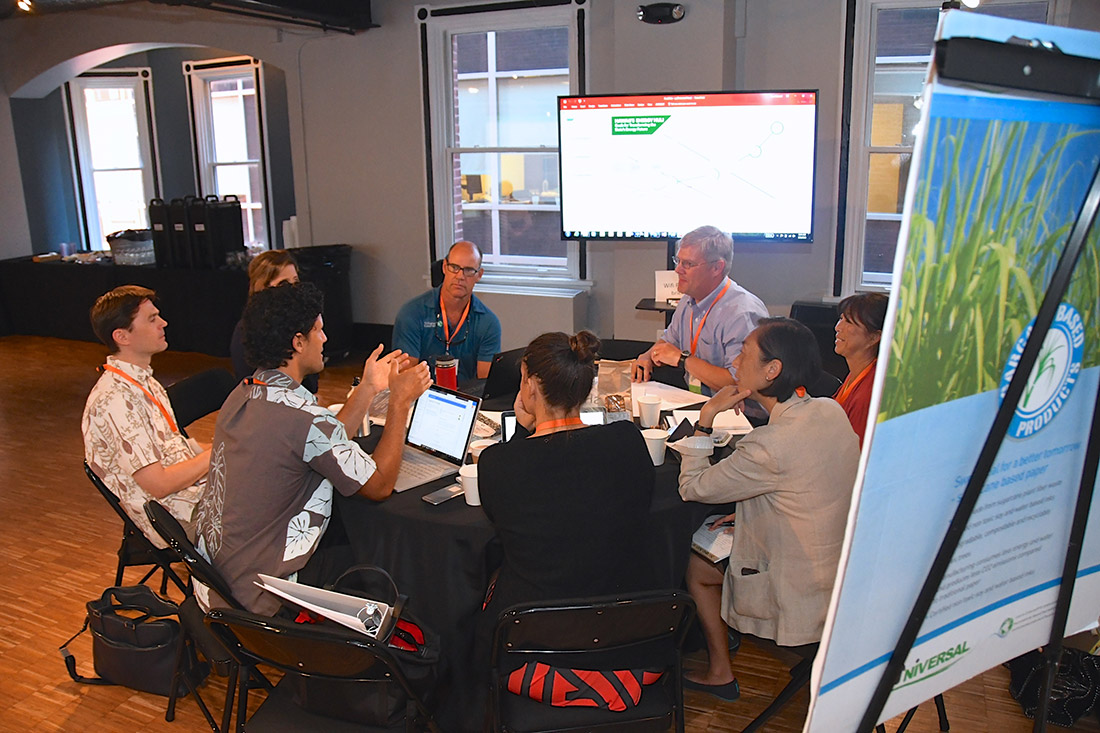 “One of the things we’re starting to think about is, can we do better job of optimizing water quality and carbon sequestration goals,” says Elliott Campbell, director of the Center for Economic and Social Science in the Maryland Department of Natural Resources and a participant in last year’s Learning Lab.

In Hawaii, where Gov. David Ige signed legislation in 2018 that commits the state to become carbon neutral by 2045, a carbon farming task force is exploring how to boost sequestration through planting native trees, restoring wetlands, tweaking agricultural methods, and other initiatives. The state aims to protect 30 percent of its priority watersheds by 2045 and has launched a pilot project to reforest 5,500 acres on Mauna Kea.

“They are taking a really thoughtful look at opportunities in the [land] sector,” Jahns says.

While Alliance states still have work to do to turn their ideas into policies and laws on the books, momentum is increasing. “These states have shown unprecedented commitment to including the land sector in the climate solutions toolbox,” Daley says, “and are making huge strides with ambitious new policies and funding.”

And even in states still struggling to advance climate change actions, there is often broad support for reducing wildfire risk and protecting water quality, which can make land sector-based climate policies an easier sell.

“Protecting the land base and enhancing carbon sequestration are things that have other co-benefits to land management and public health needs,” says Jahns. “Conservation, restoration — these are American values people want to invest in.”

Building on the success of the 2018 event, American Forests will host additional Learning Labs for the Alliance, this time region-based, “so we can get more specific on regional nuances,” Daley says. The first of four regional labs, focused on mid-Atlantic states, will be held this October, with the Midwest, West and Northeast Learning Labs to follow. 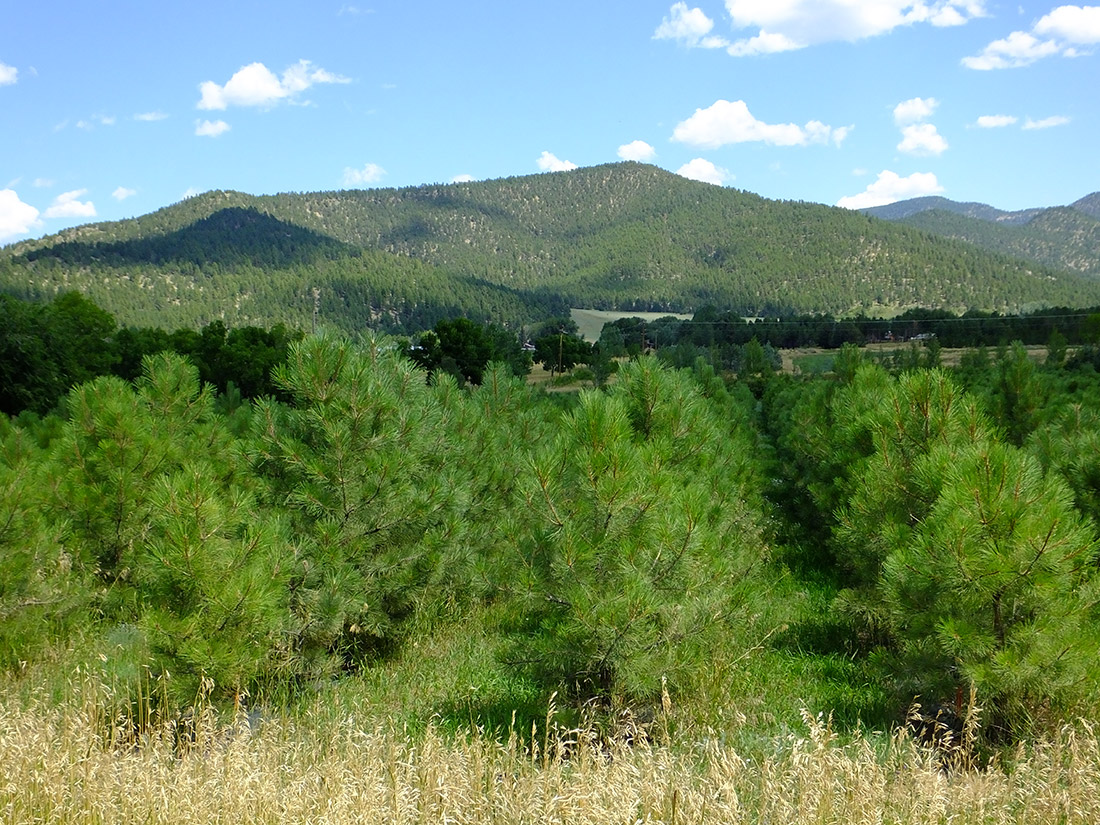 Ponderosa pine plantation at the John T. Harrington Forestry Research Center in Mora, N.M. The trees are grown from seeds collected across the West to test which ones will survive and grow best in a changing climate. Credit: Austin Rempel.

Looking further ahead, the 2020 election cycle will offer states with a crucial opportunity to advance carbon protection initiatives — and get them funded, Orel says. Unlike climate change policies that focus on ditching fossil fuels for renewables, conservation, which serves the dual purpose of keeping cherished lands intact and locking down carbon, can be far more palatable to voters, she noted.

“We foresee more ballot measures in 2020, and we think they’re going to want to raise money for parks and restoration but might not say it’s for climate solutions,” says Orel.

The federal government might also play a role in these state efforts. Daley notes that recent federal legislation introduced to advance natural carbon capture, called the Climate Stewardship Act, would provide billions of dollars in federal support through state-matching grants for exactly the kinds of climate solutions through land that the Alliance states are pursuing.

April Reese is an environment and science journalist based in Santa Fe, N.M. She holds a master’s degree in environmental studies from the Yale School of Forestry and Environmental Studies.