“Checking out the Redwood Forest” 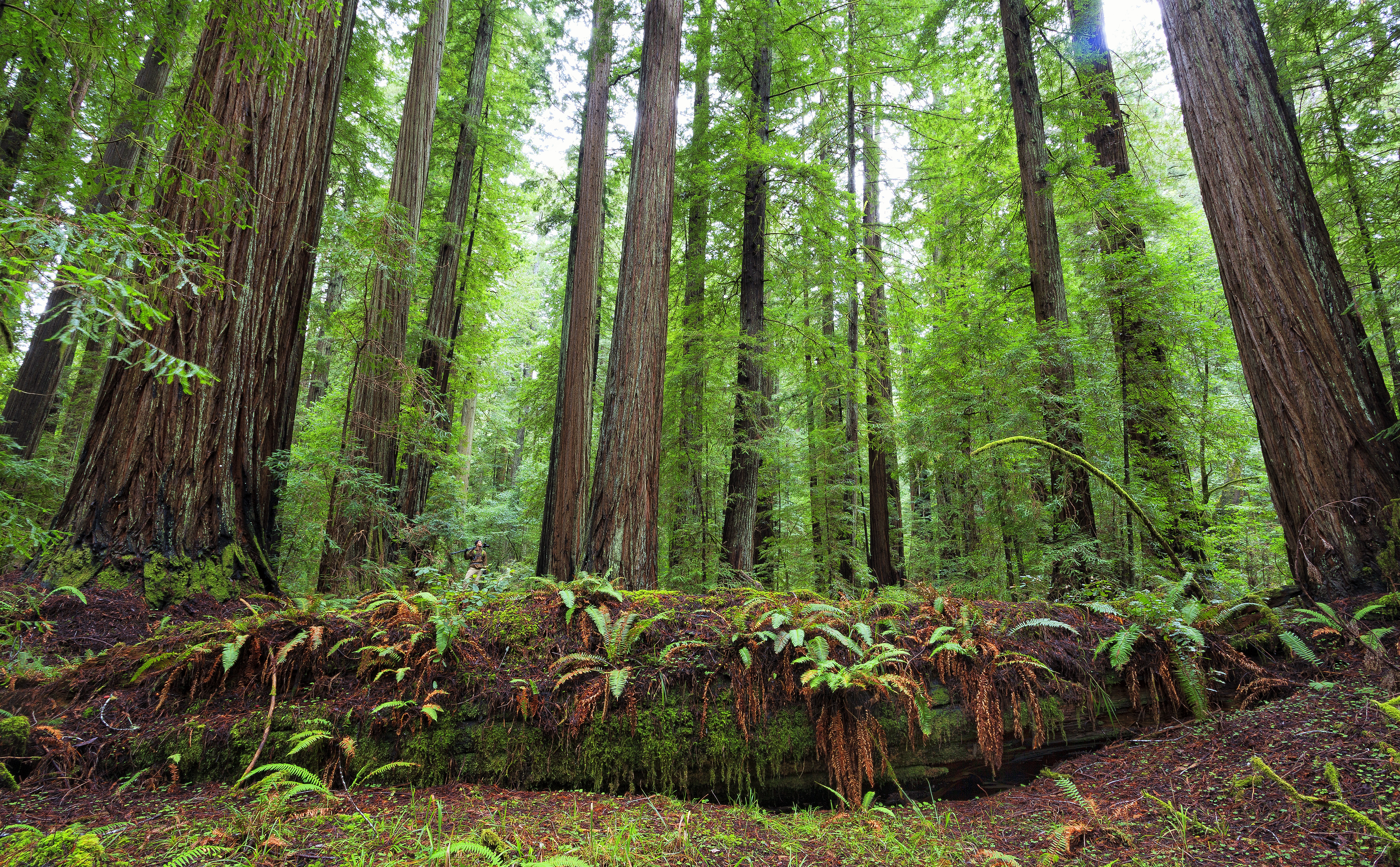 ABOUT THE PHOTO:
The photo “Checking out the Redwood Forest” was taken during a hike in Humboldt State Redwoods Park, Calif., last winter. Humboldt State Redwoods Park is a magical place to Yinghai, more so in winters because there are less visitors and it is more lush due to the rain. During Yinghai’s hike in the Bull Creek Flats with his buddy Max Forster, they were by themselves the whole time, enjoying the serenity and beauty that the old-growth forest can offer. It was cold and wet. Yinghai was leading the way and turned back, seeing Max, with camera and tripods on his shoulder, standing on a huge log and scouting the forest. Yinghai felt it would make a good photo to show how gigantic these trees are with Max as a reference. So, he opened the shutter, and this is how this photo came to be. Max and Yinghai have been exploring old-growth redwood forests for quite some time and feel blessed to be able to see these giants, which is only five percent of what used to be before logging. They maintain a Facebook page “Redwood Photography” to share with people what they see in the forest from time to time.

ABOUT THE PHOTOGRAPHER:
Yinghai Lu is originally from Shanghai, China. After obtaining his PhD in electrical engineering, he moved to the United States and currently is a software engineer in the San Francisco Bay Area. Yinghai loves forests, especially old-growth redwood forests. He spends lots of time with his friend, Max Forster, exploring the redwood forests in northern California. Seeing these giants who are thousands of years old makes him feel humble, and he finds it to be therapeutic.

WHY WE LOVED IT:
“We were captivated by the way this image unfolds in layers. There is so much going on. First you see the magnificent vertical tree trunks and the spray of cool green leaves, then the understory plants and the decaying fallen tree, which will nourish the trees above it. There is something about the composition and colors — greens, oranges and browns — that make you feel the dampness and stillness of the place and imagine the peaty smell of earth. Then, you see the man, standing in for all of us, tiny and insignificant against the ancient and astonishing redwoods. In so many ways, this picture tells the story of this forest — its lifecycle, its sense of place and its grandeur.” — Scott Steen, CEO, American Forests 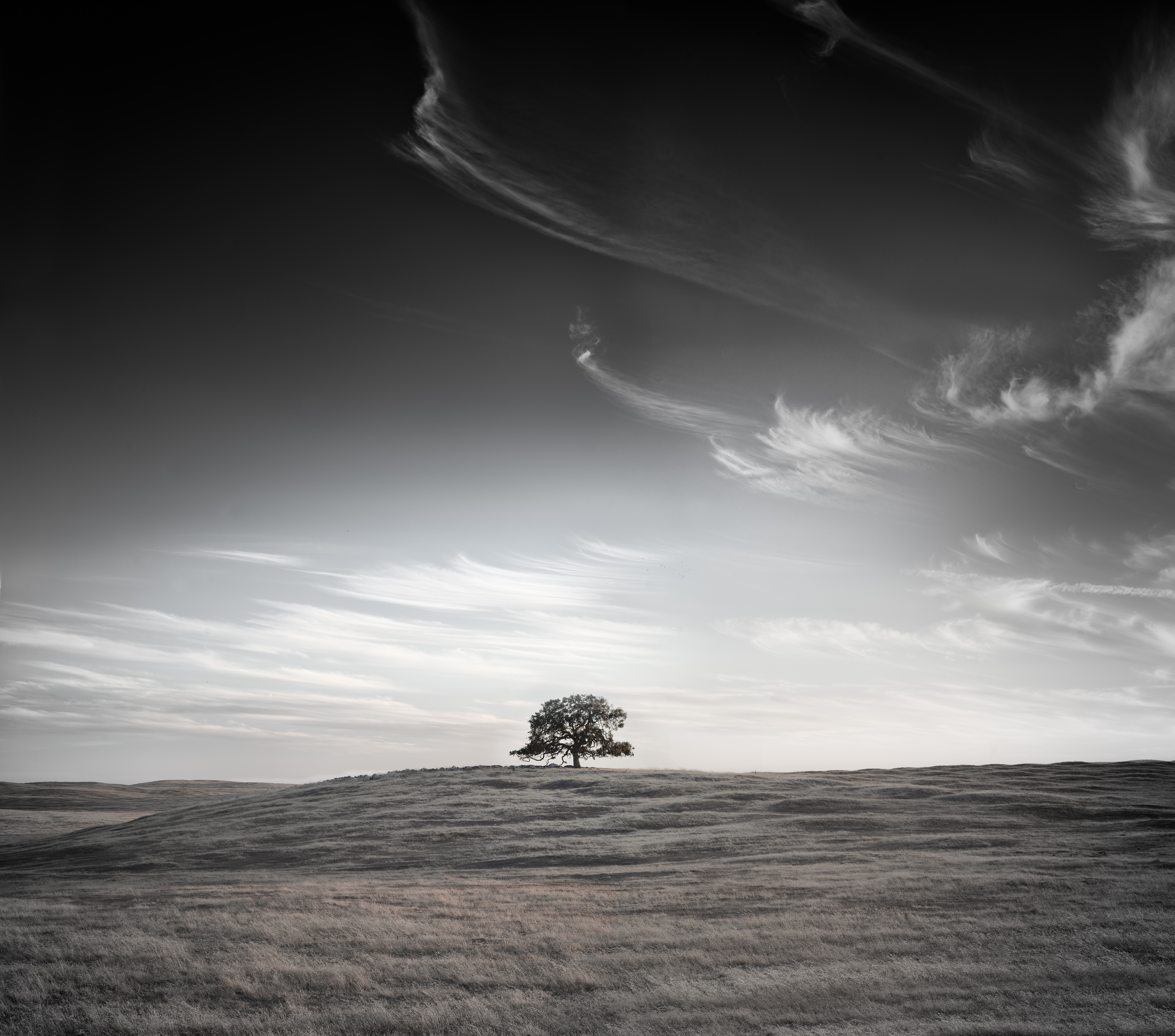 ABOUT THE PHOTO:
Exploring the less-traveled Sierra Nevada foothills, one discovers California history hidden in grasslands and watched over by valley, interior live and blue oaks — California history without fanfare and in plain sight. Oaks, and this oak in particular, are markers of time — time larger and outside of our human span. It stands stoically, marking time, alone, yet of the landscape.

ABOUT THE PHOTOGRAPHER:
Photographer Jason Liske’s passion for visual storytelling leads him to explore spaces in depth. He strives to capture moments where humans and nature intersect, his photographs reflecting his appreciation for bold forms and landscapes that resonate in their surroundings. Jason has been shooting landscapes and gardens professionally since 2003. He has collaborated with some of the leading garden and landscape design firms in the western U.S. to capture and express their projects and identity within the digital medium.

WHY WE LOVED IT:
“There is something spectacular, almost breathtaking in this serene, yet simple, image of a lonely tree. The tree silhouetted against the horizon makes a delicate explanation point that arrests the motion of the wind-driven grasslands below and the wispy cirrus clouds above. In the vastness of the photograph’s space, we sense the beauty, strength, vitality and, yes, fragility too, of this lonely tree. It’s a photograph you can look at for a long time and just let your imagination go.” — Lou Mazzatenta, Former National Geographic Photographer 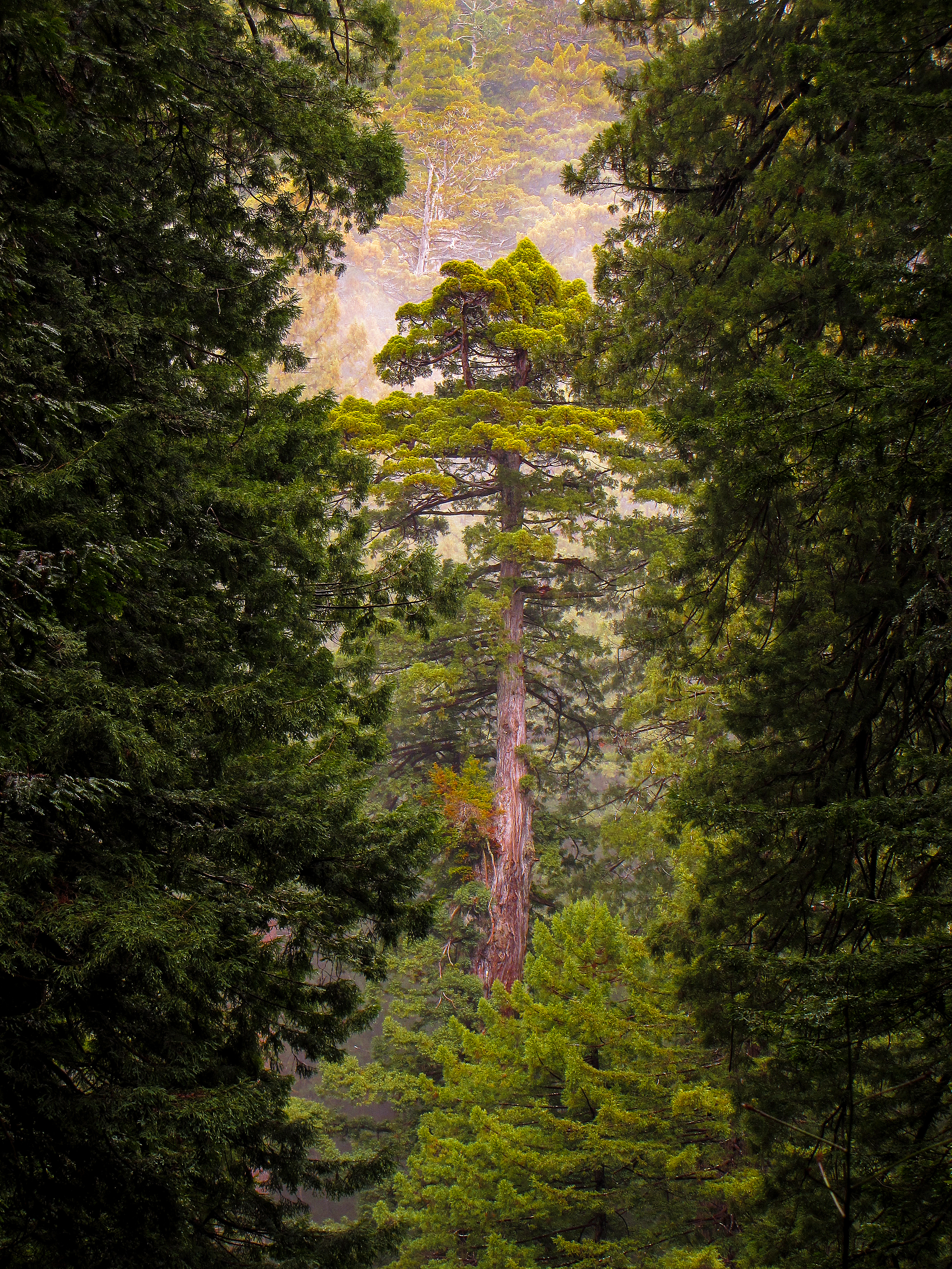 ABOUT THE PHOTO:
This photo was taken about two hours before finding the world’s tallest known hemlock, a tree called Tsunami. The hemlock find and photographing of this coast redwood were on a visit that coincided with tsunami conditions in northern California from the 2011 earthquake in Japan.

ABOUT THE PHOTOGRAPHER:
Mario is an Oregon-based certified arborist with over 30 years of experience in horticulture. He is also a professional portrait and fine art print photographer in Oregon and northern California. Mario is married to Jan Vaden, with four children, four dogs and two Green Cheek Conure Birds.

WHY WE LOVED IT:
“This image immediately draws you in at first glance. The dark trees on the sides guide your eye directly into the bright-green tree in the center and makes it feel like a sudden, surprising discovery during a walk in the forest. The hint of fog just above the tree adds additional depth to an already rich and beautiful scene. Overall, it feels like a celebration of this magnificent, ancient tree — the thrilling climax after a long hike. From a technical and stylistic perspective, the photographer has carefully controlled the contrast, white balance, sharpness and composition to help create a masterful image.” — Brad Latham, Designer, American Forests magazine 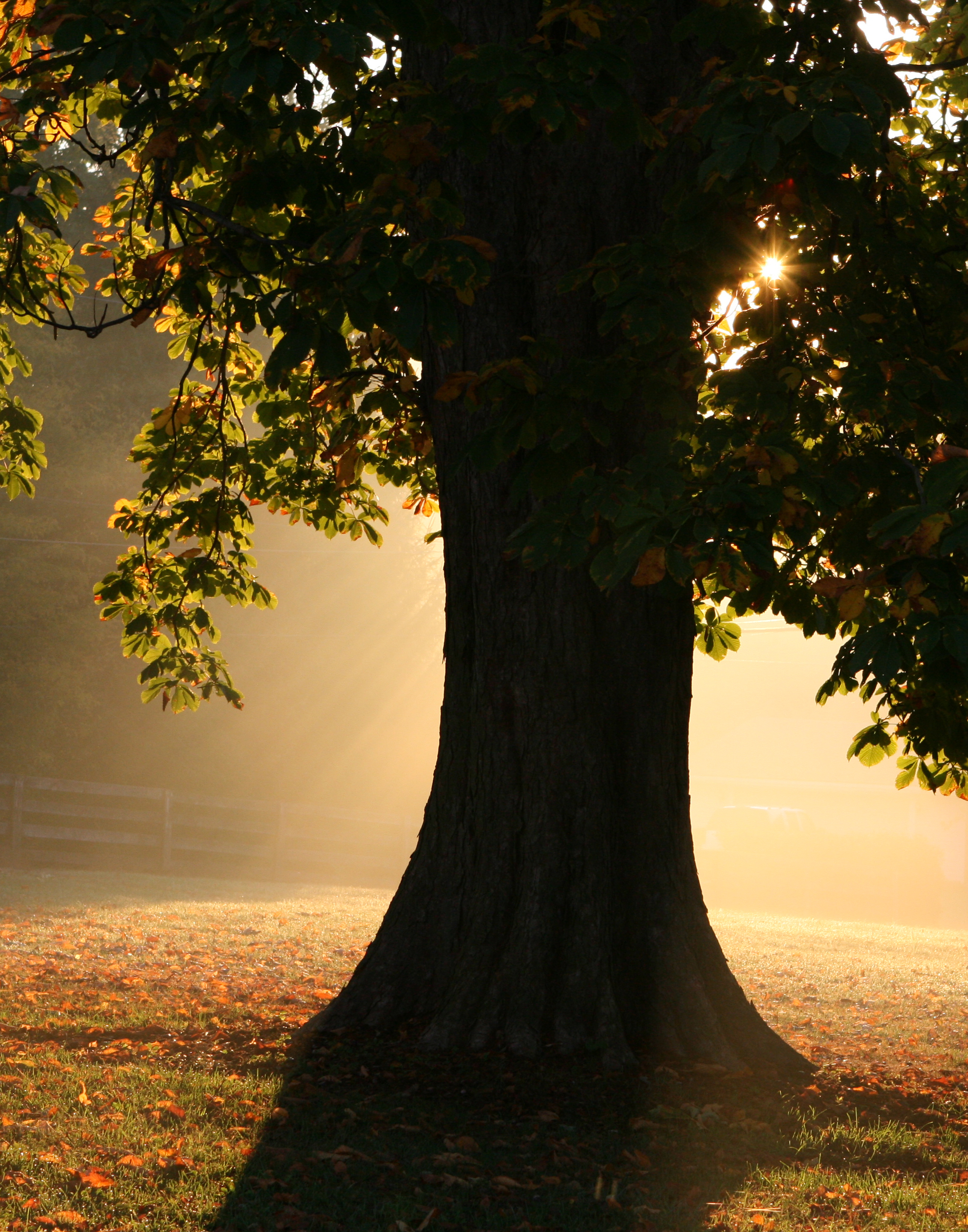 ABOUT THE PHOTO:
This beautiful horse chestnut tree is at least 100 years old and stands over 75 feet tall. It is located in front of Diana’s house on her small Maryland horse farm. The photo was taken one October morning when the sunrise shone through the mist. A family member was having surgery that day, and Diana took this lovely scene as a sign that everything would go well (and, it did!). Every fall, Diana and her family hear the “clunk, clunk, clunk” of the chestnuts dropping on the porch roof. Needless to say, it is a very popular tree with their squirrel population.

ABOUT THE PHOTOGRAPHER:
Diana F. Fraser is an amateur photographer who specializes in photographing nature and wildlife, horses and agriculture. Fraser has earned recognition for her work in various competitions, including being named the Grand Prize winner in the 2010 Pennsylvania Farm Show photo contest and the third-place winner in 2014. Her photograph of Havre de Grace, Md., won the Towns and Cities category of the Maryland Life magazine 2009 annual photo contest, and her photograph, “Christmas Snow,” was a finalist in the Tractor Supply Company 2008 photo contest, to name only a few. Fraser works in marketing and communications at the corporate headquarters of a national health care system. She lives on a horse farm in Carroll County, Md., with her husband.

WHY WE LOVED IT:
“The tonal range in this image is remarkable, from the total darkness of the silhouetted tree to the piercing highlight of the sun, she takes it literally and figuratively from 0 to 100 and everything in between. Look how she captures the sun’s rays backlighting, thus, making the leaves glow. Look how the sun is perfectly placed so that even pointing straight into the camera, it doesn’t blow out anything near it. But, what brings the image to the exceptional category for me is the mist. The mist diffuses the sun’s intensity, and it’s what gives the entire image its golden glow. That glow forms the background that really makes the silhouette pop. And, I like how it causes the fence in the back to gently disappear to the center of the frame. This is a terribly complex image that easily would have been a challenge for most pros to pull off.” — Chuck Fazio, Artist-in-Residence, American Forests 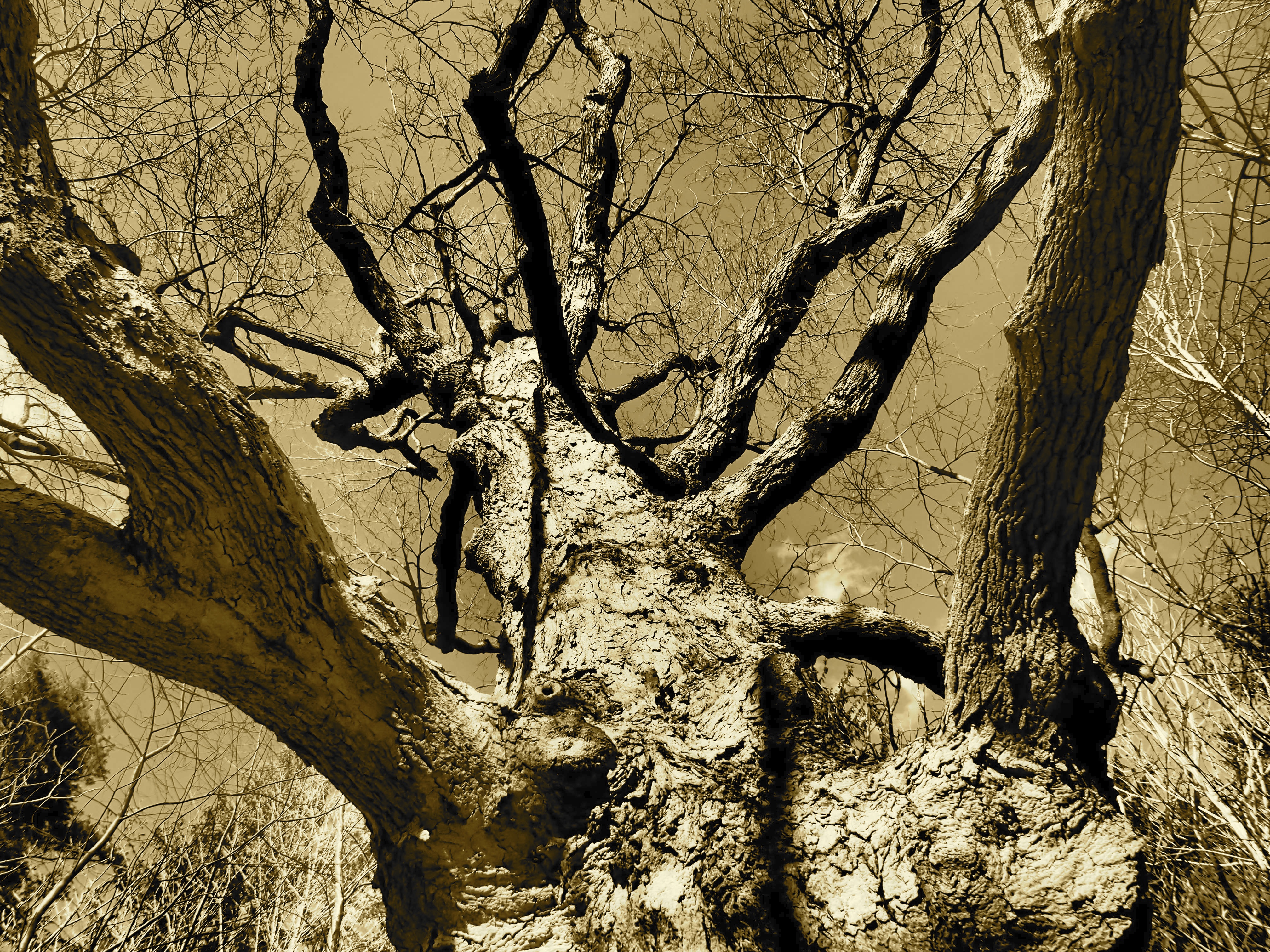 ABOUT THE PHOTO:
The minute Madeline saw this tree she knew it was magical. It is on Mt. Philo, Vermont’s oldest state park, created in 1924. As you hike up to the tree, you always notice that the sun shines on it with such pride and beauty. Madeline believes this beautiful old maple tree is a “Mother Tree.” There is a separation all around it from the younger trees in the forest, perhaps out of respect for an elder. Madeline honors this magical tree every time she hikes up beautiful Mt. Philo.

ABOUT THE PHOTOGRAPHER:
Madeline Ligenza is an amateur nature-loving photographer living in Vermont. The youngest of seven, nature gave her a special place where she could always find peace for herself outside the busy home. Madeline’s late uncle Tony was an artist, film editor and fellow photographer who was an inspiration for her journey into photography. She is an avid animal lover and her other hobbies include: hiking, kayaking, gardening, cooking, craft beer, metal detecting and collecting crystals. In her photos she loves to capture the energy she feels from her love and respect of mother nature. Madeline always feels free while in nature, so she decided to name her company “Nature Is Free Photography.” You can view more of Madeline’s work at www.natureisfree.com.

WHY WE LOVED IT:
“People loved this photo, and they told us so! They described the tree as an old soul, regal, undulating bark, the epitome of ancient strength and more; about the photo, they praised it as a well balanced image with excellent detail. The photographer captured the pureness that is nature! To me, it is an artful view of the tree’s aged fingers stretching into the sky, playing tunes in the wind.” — Lea Sloan, VP of Communications, American Forests