The city of Portland, Oregon is planting tens of thousands of trees, adding green infrastructure to the traditional gray.
By Lisa Ekman

As the Willamette River winds through downtown Portland, Oregon, it flows past dozens of sewage outfall pipes. On almost any rainy day, you can stand on a riverside walkway and watch as these pipes spew raw sewage into the river.

Over 800 cities across the US, including Portland, have combined sewer systems, which means that they collect and move both sewage and rainwater. During storms, these cities’ treatment plants, and the pipes leading to them, fill up with a combination of sewage and rainwater. That combination often empties into lakes, rivers, and oceans. The idea is that Portland should invest in infrastructure that is literally green (green roofs, trees, and natural areas), along with the grey infrastructure (pipes, roads, and culverts) that cities traditionally build and maintain.

The City As A Funnel

The main part of Portland’s sewer system was built in the early 1900s, when most cities simply dumped raw sewage into rivers, lakes, and oceans. Allowing rainwater to drain into wastewater sewers meant that cities could lay fewer pipes and the rainwater would clean them regularly.

However, Portland’s early planners could not know that future generations would treat sewage. They also could not foresee how many parking lots, roofs, and streets would come to replace the city’s forests and wetlands. Impervious surfaces now funnel in more rainwater than the sewer pipes can hold. Portland’s main sewage treatment plant, built in the 1950s, does not have the capacity to treat the sheer quantity of water that comes with a rainstorm.

In 1991 the Environmental Protection Agency ordered Portland officials to stop raw-sewage overflows. At that time, about six billion gallons of untreated sewage and stormwater flowed into the Willamette and Columbia Rivers each year. The city decided to solve half of its sewage problem with traditional grey infrastructure, including a wastewater storage tunnel, and the other half with projects like downspout disconnection, stream daylighting, and what would become Grey to Green. 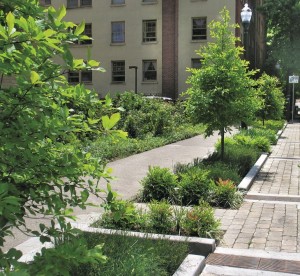 Theoretically, it’s not all that difficult to plant 83,000 trees in five years. A professional can plant more than a thousand trees in one day. The challenge is to find appropriate places for trees in the complex urban grid. Urban foresters contend with overhead and underground utilities, traffic visibility, growing space, and—perhaps the most complicated part of the equation—property owners. Portland has already planted its tree-worthy public spaces, and has the most to gain from tree planting on private property.

To encourage property owners to plant trees, Grey to Green’s canvassers talk to residents about benefits like air quality and increased home value (up to $7,000 for a big, healthy tree). Canvassers also explain the city’s rewards for tree planting: Property owners can claim a “Treebate” for trees they buy, and receive regular discounts on sewer bills. Property owners can get help at every step of the process from the Portland-area nonprofit Friends of Trees, an organization that helps property owners choose, buy, and plant trees.

If a property owner wants to plant a tree between the street and the sidewalk—an area the city has targeted for planting—an inspector from the city’s Urban Forestry department must assess the site’s intersections, fire hydrants, power lines, stop signs, curbs, property lines, water lines, driveways, and strip width.

“There are a million regulations for planting street trees,” Jennifer Karps says, and it can seem that way. Yet one by one, the trees are planted.

How Much Stormwater Can Trees Manage?

Sometimes it is hard to imagine how this one-by-one approach to tree planting could really make a difference to the city’s overall stormwater problem. How much water can trees really manage? Scientists have studied how trees absorb rainwater, and the relationship between urban trees and stormwater, but the number of studies is still relatively low. Portland’s tree-planting program is well underway, but no one is sure how much stormwater the city’s trees can manage. Geoffrey Donovan, a research ecologist for the US Forest Service in Portland, wants to find out. Donovan has studied how urban trees affect crime rates, birth weights, and home values. Later this year he will turn his attention to the science of trees and stormwater. 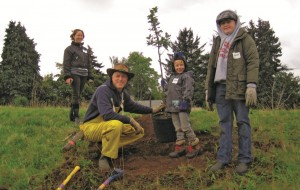 He explains that trees manage stormwater in three basic ways: Roots take up the water and distribute it to the tree; some water lands on leaves and branches and evaporates there; and roots create gaps in the soil that allow water to seep through.

To figure out how much stormwater Portland’s trees manage, Donovan will split the city into about 50 “sewersheds,” noting the amount of canopy cover within each. Working with sewer flow and canopy cover data, he will compare sewersheds to see if trees reduce the amount of stormwater pouring into sewers, or at least reduce sewers’ peak flows.

Peak sewer flow is like peak demand for electricity. Just as electrical utilities design infrastructure to handle the hottest, most air-conditioned day of the summer, sewer utilities design pipes and treatment plants for that maximum-use morning that combines residents’ regular showers, a heavy rainstorm, and a public pool cleaning.

“If you can use trees to flatten out the peak flow,” Donovan says, “you can change the fixed infrastructure.”

Reducing peak flow could save cities a lot of money. With lower flows, they might not have to replace small pipes or expand treatment plants.

Existing treatment plants could also save money on electric bills and basic supplies like chlorine. Fewer raw-sewage overflows would also mean fewer fines paid to the Environmental Protection Agency. And, of course, fewer overflows would lead to cleaner rivers, lakes, and oceans.

Here’s the problem: When sewage flows at its peak, most trees—and the soil around them—have already absorbed as much water as they can. In Portland, where winters are rainy and summers are dry, a tree’s seasonal growth pattern doesn’t line up with the city’s stormwater management goals.

“In a sustained winter storm,” Donovan says, “trees aren’t going to remove a great deal of water from the system.”

Karps acknowledges this challenge. “We don’t know exactly how much stormwater trees can remove from the system,” she says, “but trees also have complementary values: air quality, habitat, food, shelter, sense of place. They’re a more charismatic solution than, say, sumps or pavers.”

Portland does not pay for street-tree maintenance, leaving the cost of pruning, leaf pickup, and sidewalk repair to property owners. When canvassers to talk to people about trees, some residents balk at the expense of maintaining them, and others are startled by the fact that their sewer bills (among the highest in the country) pay for plants.

But Karps insists that trees are infrastructure, and the city should plant and maintain them accordingly. She is not suggesting that the city take over all tree maintenance, but does think that Portlanders should commit to maintaining green infrastructure at the same level they maintain grey infrastructure. If trees are going to remove stormwater from the system, they need to be kept healthy.