Home/Blog, Wildfire/Wildfires Extend Beyond the Wild in Bastrop, Tex.

Wildfires Extend Beyond the Wild in Bastrop, Tex.

Wildfires scorch more than just wild vegetation. They extend beyond the forest, where one might go hiking over the weekend, and impact the lives of thousands of people. Climate change and severe weather patterns create conditions favorable for wildfires of increased severity. These fires spread more easily and burn at a higher temperature, with a net result of increased damage to property and ecosystems. Often, they are so hot that they destroy the seed sources, squelching any chance at natural regeneration for the forest. Though wildfires can be beneficial to forests by clearing areas for regrowth and increasing sunlight, wildfires in conditions of high heat, high winds and high drought, are not.

For thousands of years, this cycle of forest fires has been happening naturally to help cleanse forests, with lightning serving as the natural catalyst for the cleanse, says Matt Mears, Reforestation Manager at TreeFolks, an urban forest conservation group based in Austin.

“It’s kind of a complicated issue because fire in this part of the world, is a natural thing, that happens on sort of a regular basis in these kind of systems,” says Mears. “It’s the same in the rest of the Eastern Loblolly pine forest.  They evolved with really frequent fires.”

However, since 1970, annual temperatures in the Western part of the U.S. have risen 1.9°F on average, according to the Union of Concerned Scientists. Though this may not seem like a large difference to Texas’ arid climate, high temperatures cause forests to become dry and easier to ignite by an errant spark.

This has been the case with the recent wildfires consuming Bastrop, Texas.

“While fire is a natural thing in ecology, when it happens on that scale, it’s just really devastating,” says Mears.

However, increased annual temperatures also cause snow to melt earlier, so that the hottest part of the year coincides with the driest. The dead organic matter accumulates and becomes a huge source of fuel for wildfires, and wildfires are able to spread quicker and burn longer. In comparing 1970 to today, the U.S. Forest Service reports that wildfire seasons are 78 days longer.

Climate change is turning wildfires from a natural cleanse to a dangerous natural disaster.

Bastrop, Texas has experienced two wildfires of this variety in the last five years. In September 2011, a downed power line sparked a wildfire that burned across 34,000 acres, taking the lives of two people and reducing more than 1,600 homes and businesses to ash. The fire burned for 24 days and came to be known as the Bastrop Complex Fire. This past October, a fire known as the Hidden Pines Fire burned 4,582 acres of land and destroyed 64 homes.

After the Bastrop Complex Fire in 2011, American Forests restored 350 acres of the private land that was damaged by planting 54,000 trees. Working with TreeFolks and Alcoa Foundation, loblolly pines were planted to help the Lost Pines ecosystem. A special coating on the needles of loblolly pines allows them to survive the dry climate of central Texas. Their presence creates a habitat for the endangered animals, like the Houston toad, the red-cockaded woodpecker and bachman’s warbler,while protecting the ecosystem. 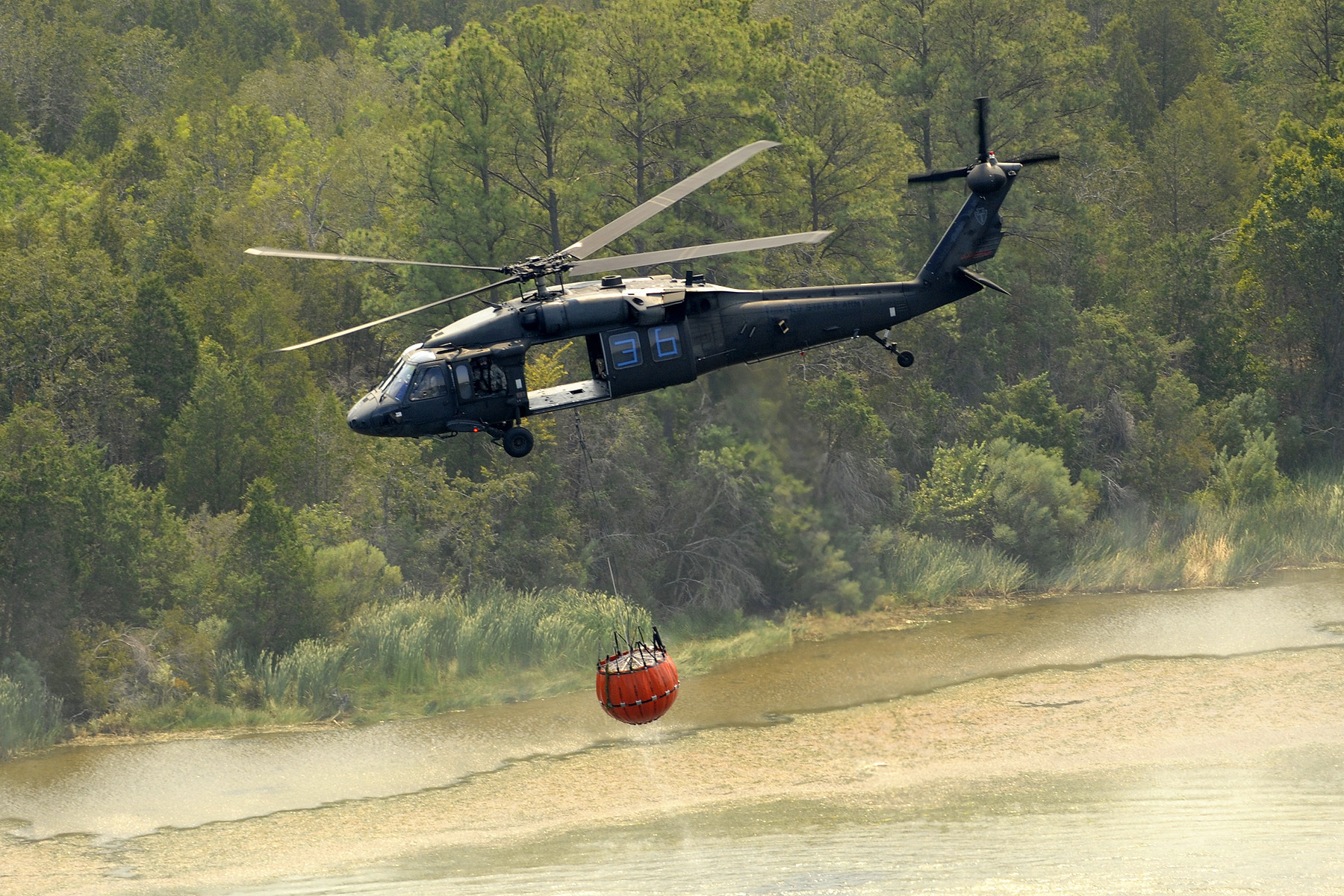 A Texas National Guard Black Hawk helicopter heads back to battle the blaze after it refills its Bambi Bucket. Bastrop, Texas, Sept. 6, 2011. Credit: DVIDSHUB via Flickr

One year after this 2011 fire, American Forests helped TreeFolks distribute 10,000 seedlings to landowners affected by the wildfires. Mears emphatically speaks to the importance of helping landowners.

“We try to accelerate the natural process of regeneration,” says Mears. “It’s important for land owners and helps with their healing process. Many of the people we work with lost everything. It’s really special to bring out a hundred volunteers to help land owners plant trees on their property.”

More than 11,360 acres in the burn scar were owned privately and most were moderately to severely burned, meaning that loblolly pine regeneration would not occur naturally. Without a root system, like that of loblolly pines, holding down soil, land is more vulnerable to future damage like erosion and soil loss.

A few months before the Hidden Pines Fire this year, American Forests and TreeFolks collaborated again to plant 2,000 loblolly pines to protect private lands. Alcoa Foundation funded five volunteer events and the planting of thousands of native trees by AmeriCorps members. Though it is unfortunate that much of the land that was replanted was burned again, American Forests and TreeFolks are still committed to reforesting high risk areas.

Studies have shown that reforesting helps to revive land after a forest fire as well as to help the environment. According to the U.S. Forest Service, “prompt reforestation is desirable to prevent soil erosion and protect water quality in streams and lakes.” In comparing wildfires in other parts of the world to those in grassland regions in Africa and Australia, grassland wildfires don’t add a substantial amount of CO2 to the environment. NASA attributes this find to the quick regrowth of vegetation which negates the input of carbon into the atmosphere from the fire.

In Bastrop, the work that American Forests, Alcoa Foundation and Treefolks have done has “allowed reforestation in areas where it might not have been possible. The area may have become established by oaks and other species, or not at all,” says Mears.

Wildfires are becoming more severe due to climate change and the associated erratic weather patterns. The U.S. Forest Service already reported that they spend more than half of their total budget on quenching wildfires. This is 16 percent higher spending than 20 years ago. In addition, urbanized sprawl puts communities at risk due to the close proximity to fuel for the fire.

Forest fires pose a higher risk to the peace between humans and the environment, now more than ever before.  Luckily, there are many ways to mitigate the risks, such as managing land in high risk areas, reducing human-induced sparks and prompt reforestation after a severe wildfire. American Forests, Alcoa Foundation and TreeFolks are working to heal ecosystems after these devastating ecological events.