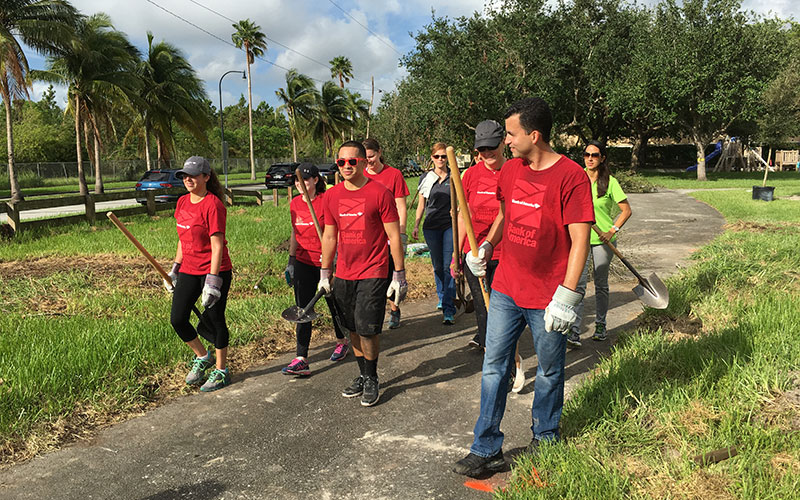 Bank of America Volunteers at a Miami Tree Planting in 2017

The reception is an evening event: Growing Resiliency: Urban Forests & A Vibrant Miami, hosted by American Forests on Thursday, May 3 at Jungle Island, sponsored by Coca-Cola Beverages Florida (Coke Florida) and Bacardi. The evening will feature a chat with the City of Miami’s Chief Resiliency Officer, Jane Gilbert, and American Forests’ Vice President of Conservation Programs, Jad Daley. Daley will also be the keynote speaker at Miami-Dade County’s Leaf Workshop: Hurricanes & Our Tree Canopy on Friday, May 4.

American Forests has worked on restoring urban forests in Miami-Dade with local partner Million Trees Miami for four years, with the support of its corporate partner, Bank of America. Both will be honored at the May 3 reception.

“Miami is a high-priority city for us,” said Scott Steen, president & CEO of American Forests. “It is a vibrant, international city with a rich, diverse culture, but its location makes it extremely vulnerable to the effects of climate change. This is especially true for many of its economically disadvantaged residents, who are likely to feel these impacts the most.”

But there is also a critical sociological component to the areas in which American Forests, working with Million Trees Miami, has chosen to plant. In Greater Miami, as in cities across the country, underserved neighborhoods have far fewer trees than affluent ones. Trees not only provide green infrastructure to help cool cities, lower energy costs and prevent flooding by absorbing rainwater, but research shows that adding trees to neighborhoods improves physical and mental health for its residents, reduces crime rates and improves school performance, as well as contributing to happier and more beautiful cities.

The oldest national conservation organization, American Forests is a recognized leader on urban forest restoration, having worked in 20 major cities across the U.S., including Miami since 2014. American Forests has also planted more than 50 million trees in the last three decades in landscape-scale forest restoration for wildlife habitat, addressing air quality, climate and carbon-reduction, and preserving clean water resources.

American Forests inspires and advances the conservation of forests, which are essential to life. We do this by protecting and restoring threatened forest ecosystems, promoting and expanding urban forests, and increasing understanding of the importance of forests. Founded in 1875, American Forests is the oldest national nonprofit conservation organization in the country and has served as a catalyst for many key milestones in the conservation movement, including the founding of the U.S. Forest Service, the national forest system and thousands of forest ecosystem restoration projects and public education efforts. Since 1990, American Forests has planted more than 50 million trees in all 50 states and nearly 50 countries, resulting in cleaner air and drinking water, restored habitat for wildlife and fish, and the removal of millions of tons of carbon dioxide from the atmosphere.

SUMMARY: American Forests is partnering with the World Economic Forum to establish