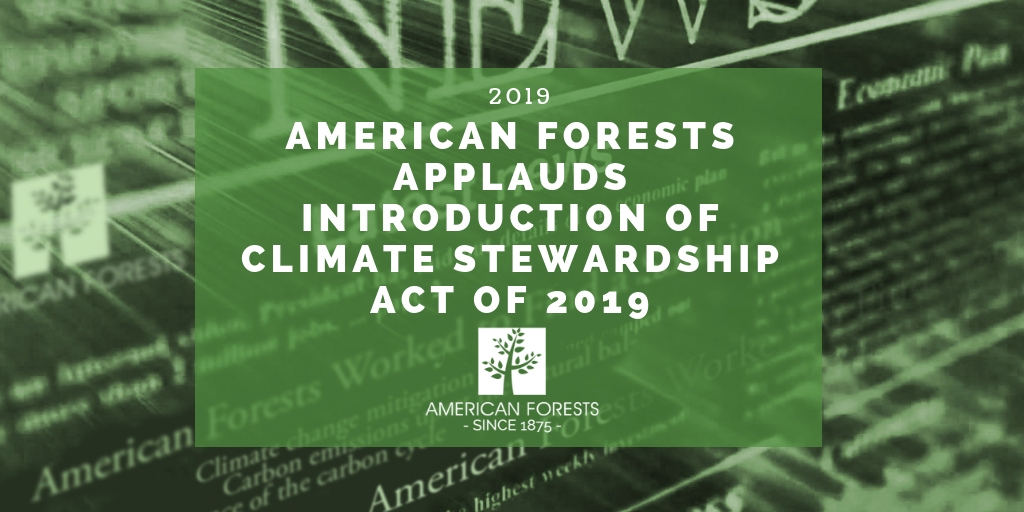 Washington, DC, September 10, 2019 — American Forests, the nation’s first forest conservation organization founded in 1875, announced its support for the Climate Stewardship Act (S. 2452) that was introduced today with leadership from U.S. Senator Cory Booker (D-NJ), U.S. Senator Tom Udall (D-NM), and U.S. Senator Jeff Merkley (D-OR). This bill includes the most ambitious reforestation proposal in our nation’s history, surpassing even the New Deal with the proposal to plant 16 billion trees across America. These trees will make an immense dent in the climate crisis, capturing enough carbon dioxide to offset more than two full years of America’s greenhouse gas emissions, and will support more than 200,000 forestry jobs in the first ten years alone.

“The Climate Stewardship Act is the most ambitious legislation in our nation’s history to mobilize America’s forests as a climate change solution,” said Jad Daley, President and CEO of American Forests, the nation’s oldest forest conservation organization founded in 1875. “With this visionary proposal to plant billions of trees across America, including cities, Senators Booker, Udall, and Merkley have shown how smart federal investment can dramatically increase the power of forests to naturally capture our carbon emissions. Best of all, the Climate Stewardship Act brings everyone on board to help, in cities and rural communities alike, and creates paid employment for people who need these opportunities most. As the organization that spurred creation of the original Civilian Conservation Corps in 1933, American Forests especially appreciates this focus on creating green jobs from the important work of solving climate change with forests.”

Title II of the Climate Stewardship Act provides funds to plant 4.1 billion trees by 2030 and 16.1 billion trees total by 2050. These newly planted trees will cover 64 million acres, with a focus on reforesting lands owned by federal, state, local, tribal, and non-profit entities. Such lands account for 42 percent of all forestlands in the United States. Thanks to the natural process of carbon sequestration, these trees will capture and store more than 13 billion metric tons of carbon dioxide by the end of the century—equivalent to more than two full years of U.S. greenhouse gas emissions at current levels.

The Climate Stewardship Act is notable for its focus on urban areas, with 400 million of the newly planted trees focused on cooling cities during heat waves to protect people and reduce energy use. This urban tree planting will be targeted to underserved communities, because urban tree cover consistently tracks income, race, and influence, with underserved neighborhoods too often falling well below the citywide average. The urban trees to be planted under this act will save more than 800 lives and avoid 200,000 incidences of heat and respiratory illness, while saving 61.9 TWh hours of electricity and 41.7 trillion BTU of gas for heating and cooling. These benefits will generate more than $10 billion in health care and energy savings, and will further reduce greenhouse gas emissions by avoiding emissions of 144 million metric tons of carbon dioxide equivalent.

“This proposal includes the most ambitious urban tree planting initiative ever imagined in America,” said Daley. “It aligns perfectly with American Forests’ call for a commitment to ‘Tree Equity’ in America’s cities so low-income neighborhoods and communities of color have the health, wealth, and climate benefits of urban trees. The Climate Stewardship Act shows how the federal government can help turn this vision into reality.”

✓ Key Provisions in Title II of the Climate Stewardship Act:

Founded in 1875, American Forests is the nation’s oldest conservation organization dedicated to protecting and restoring America’s forests, but our work today is more critical than ever because forests are a natural climate solution. Since 1990 alone, we have planted over 60 million trees in forest restoration projects in all 50 U.S. states. We have also worked in dozens of cities across America, expanding tree canopy and making our communities more sustainable, beautiful and livable. Together, these projects recover hundreds of thousands of acres of wildlife habitat, safeguard vital watersheds, absorb millions of tons of greenhouse gases and protect some of the most stunning landscapes in America. American Forests is also a noted leader in climate policy and science, including leadership of the Forest-Climate Working Group and serving as an Impact Partner to the U.S. Climate Alliance.

The practice of redlining city neighborhoods legally ended in the 1970s. But the negative impacts of nearly

What Can College Students Do to Fight Climate Change?