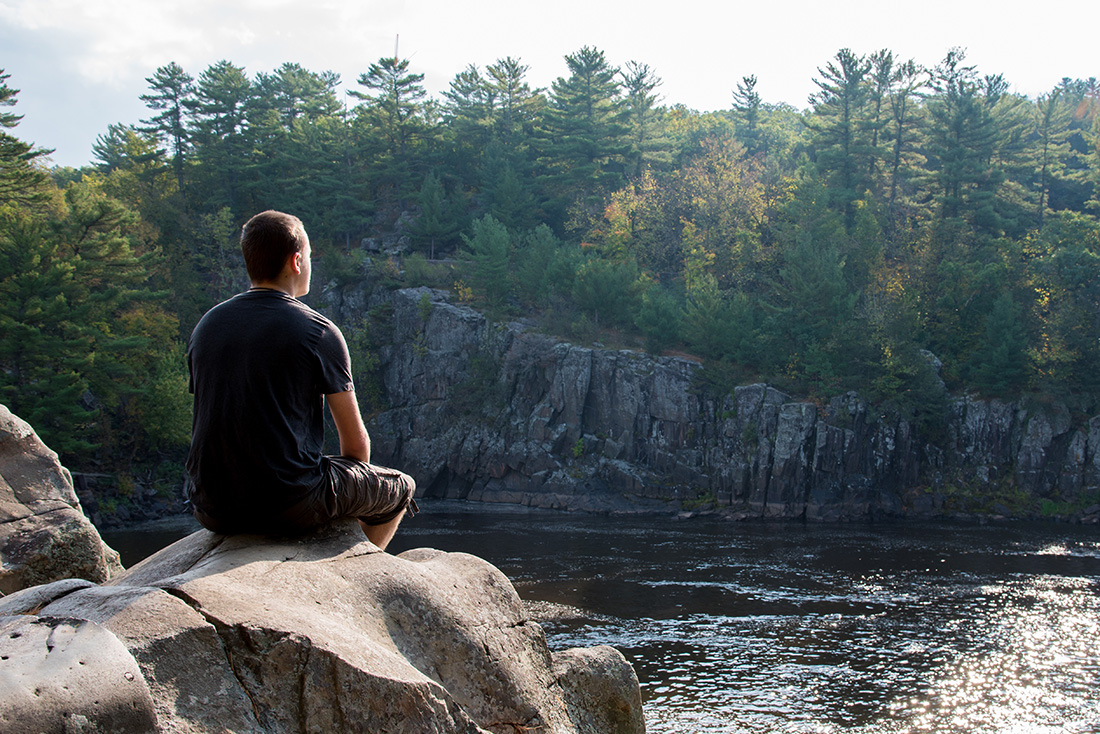 People who spend time in nature often say they feel less stressed, are better able to concentrate and generally experience a lift in mood. Credit: The Speedy Butterfly/Adobe.

STRAPPED INTO A ROCK-CLIMBING HARNESS, Dr. Kathleen Wolf and her adventurous partner soared up an old Douglas-fir that stood taller than the Statue of Liberty. The evergreen swayed like a sapling, and hawks flew in the urban park below them. At the top, the pair lingered, just to breathe it all in.

Wolf, a University of Washington and U.S. Forest Service researcher, spent several days as a volunteer ushering people into the Oregon treetops so they could experience the old beauties up close. Given her background, she had expected to field questions about tree ecology. But instead, the participants — apparently altered by the massive tree — spoke about deaths in their families, celebrations and other emotional life events.

“It was remarkable to me,” Wolf says, “what this tree experience evoked.”

A growing body of research confirms what Wolf innately knows: exposure to trees and forests can have profound benefits for psychological health. Whether climbing a majestic old-growth tree or simply walking through a foliage-filled park, people who spend time in nature often report they feel less stressed, are better able to concentrate and generally experience a lift in mood. Some even say it helps heal trauma. 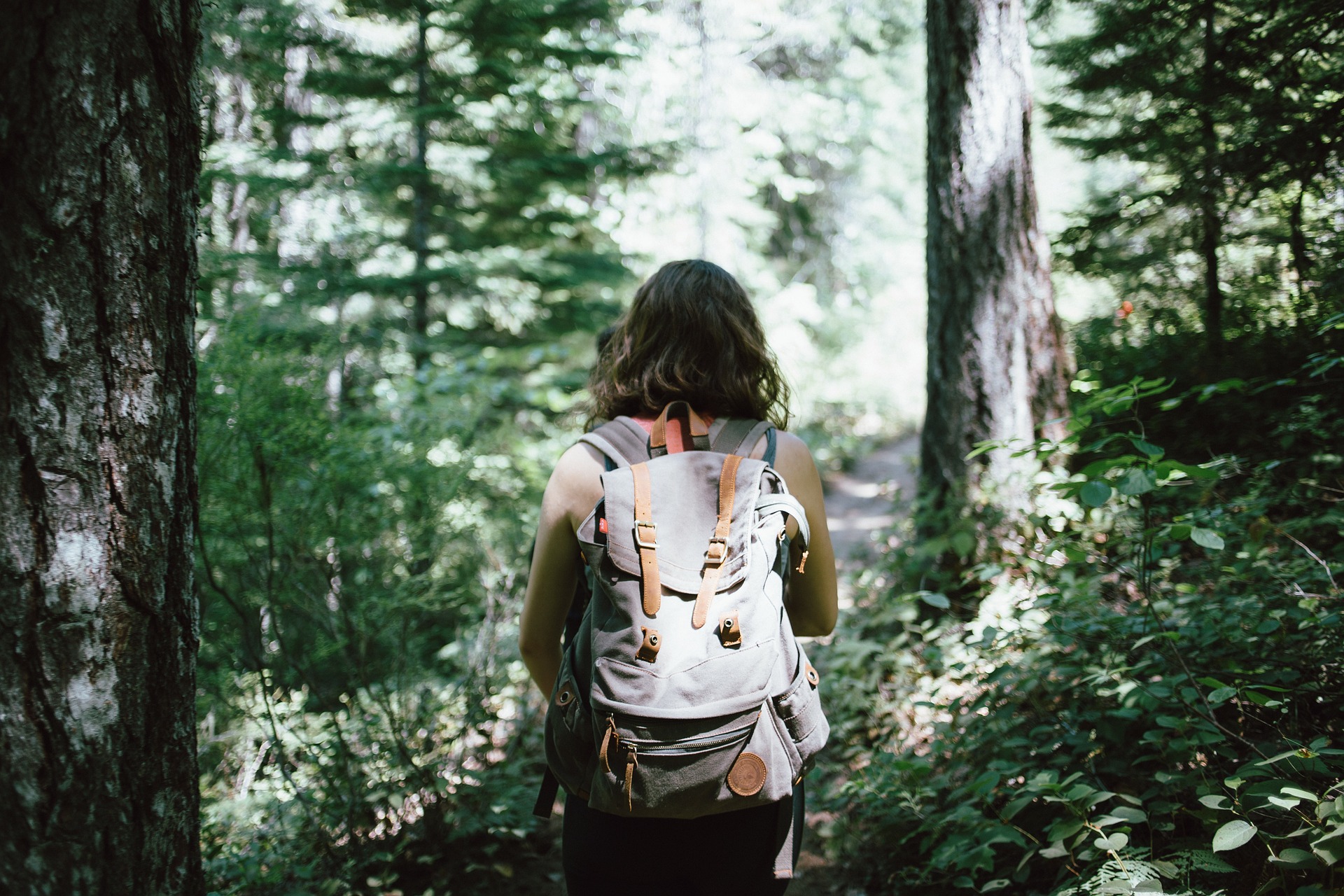 The search for deep emotional connections to trees has led some people to seek more intense and personal outdoor experiences.

At a time when our screen-obsession is increasingly linked to anxiety and COVID-19 has left many feeling isolated and distressed, it’s no wonder doctors are urging patients to unplug and spend time outside. Some physicians are writing “nature therapy” prescriptions. And “forest bathing,” a practice from Japan in which people use all of their senses to immerse them- selves in nature, has become one of the hottest wellness trends.

“Arborists tell wonderful stories about connecting in a mental-health way with trees,” says Wolf, director of the University of Washington’s Human Dimensions of Urban Forestry and Urban Greening Project. “I’m suggesting that they try to enable people who aren’t climbers to have these experiences.”

Trees are vital to everyone’s health. They filter our air and water, provide shade and mitigate climate change. But they also help us feel better. That’s one reason American Forests is leading a movement to reforest cities in a way that brings equity, especially to lower income areas that historically have had fewer trees.

Wolf, who as a research social scientist gathers studies from around the world about nature in culture, says the association between exposure to green environments and psychological health is clear. She points to a 2012 study in Chicago in which participants showed significant improvements in mood and memory after walking in nature, and a 2015 study that found time in nature can reduce rumination, the pattern of repetitive thought associated with depression.

More research appears on the mental health section of VibrantCitiesLab.com, a website American Forests helped create with the U.S. Forest Service to provide research and tools for building effective urban forestry programs. In one 2015 study, people with views of greened vacant lots experienced lower heart rates than those who only walked by buildings or vacant properties. A 2013 study concluded that access to a certain amount of greenspace within 3 kilometers can reduce symptoms of anxiety disorder, depression and aggression.

Children who spend time outside are happier, less stressed, perform better academically and are more socially engaged, according to many studies. A green view from a classroom can improve student performance on attention-oriented tests and reduce aggression, according to a 2016 University of Illinois study. Being within 1,000 meters of accessible greenspace reduced aggression in adolescents, according to research in Southern California the same year.

“We often talk about ecological and physiological concerns, like air quality and extreme heat,” says Ian Leahy, American Forests’ vice president of urban forestry. “But one of the major reasons this organization is working so hard to bring Tree Equity to under-resourced communities is to help alleviate the crippling psychological stress of poverty. Such communities often don’t have other proven means to improve self-discipline in youth, reduce anxiety and depression, or increase classroom focus.” 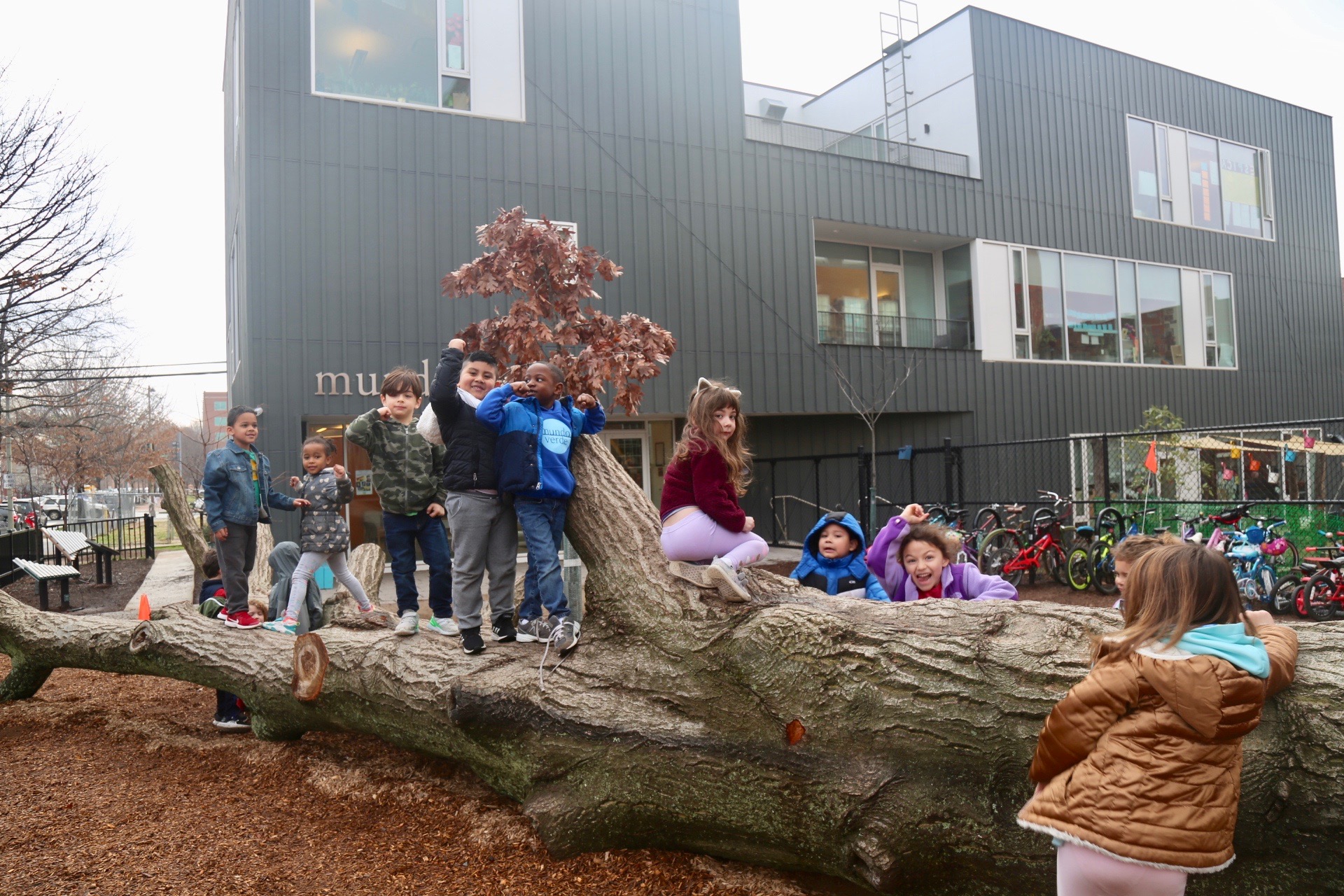 A dying willow oak, which was slated to be cut down in a nearby neighborhood, is now a focal point for Mundo Verde’s playground. Credit: Joel Clark.

Despite this, many urban schools across the country lack greenspace. In Washington, D.C., public, private and charter schools in 2015, on average, had only around 14 percent tree canopy. More than 180 schools had only 5 percent tree canopy or less, while 21 of them had none at all, according to the D.C.-based tree-planting and restoration nonprofit Casey Trees.

But places like Washington, D.C., are now working to increase their tree canopy. The city plans to cover at least 40 percent of its area with a healthy tree canopy by 2032. And one charter school, Mundo Verde, which previously had paved grounds, now models itself as the district’s first “green-focused” educational institution. The school received 40 new trees in 2015, which students and faculty helped plant.

For Mundo Verde students, trees provide lessons in ecosystems, an opportunity to connect with nature and even an outlet for physical play.

A few months ago, a Mundo Verde parent arranged for a dying willow oak, which was slated to be cut down in a nearby neighborhood, to be hauled to the school’s property. In no time, students began climbing all over its sprawling branches, giving the tree a second life and the students a new inspiration.

“I like to make trees my jungle gym,” says 7-year-old Juno Jehan Nykyforchyn-Clark, a Mundo Verde student, who knows all about how trees clean the air but would just as happily discuss their playground usefulness. “I swing on them.”

The school has also worked trees into its curriculum. Each classroom adopted a few to sit near, and students track seasonal changes in foliage and appearance. Kids may journal, contemplate the trees or practice solitude and reflection.

Staff members recall several class-mates gathering around one of the new trees and pledging to return after their high school graduation eight years later to check its progress.

The search for such deep emotional connections to trees has led some people to seek more intensely personal outdoor experiences.

Christy Thomson realized she’d achieved a newfound calm when she was in her late 30s and grappling with anxiety and post-traumatic stress disorder. 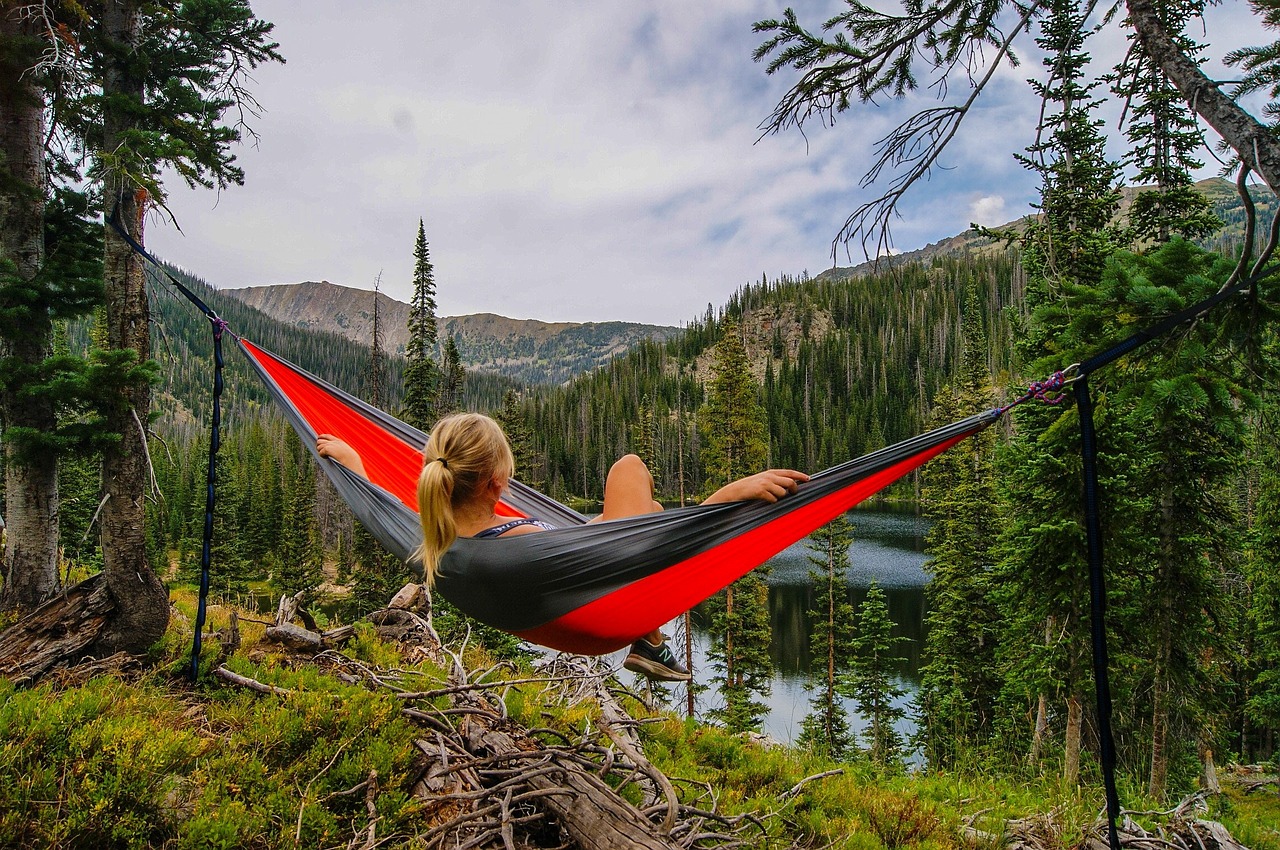 Deeply immersive experiences, as well as everyday interactions, with nature can have profound benefits

During cold Indiana winters, Thomson would spend daytime breaks from child-raising admiring the nature around her. After realizing that “there was something about being outside in the snow, watching the ice drip,” she Googled “nature therapy” and found the practice of forest bathing, also known as shinrin yoku.

Now director of the company Wild Communion and a trainer/mentor with the Association of Nature & Forest Therapy, Thomson leads contemplative nature walks, encouraging people to slow down and “sink into the moment, with senses open.” At some point, people sit by themselves or take in a tree or other part of nature for 15 to 20 minutes.

“It results in lots of psychological shifting,” Thomson says. “People let go of things a lot easier. It can be as simple as watching leaves fall from trees. As humans, we don’t often let life move and go through seasons, so this allows us to start letting go.”

While such deeply immersive experiences can have a profound effect, Wolf stresses that everyday interactions with the outdoors are powerfully effective, too. She swears by daily nature breaks.

“I am a bike commuter,” Wolf says. “For me, that has not only a mental-health benefit, but helps me think through little puzzles and get ideas.”

Wolf advocates for making policy changes that help provide nature to everyone, no matter where they live and work.

“We have thousands of studies and 40 years of research — and while dosage (how much, how often, what kind of nature) is important to learn more about, we know enough to act,” Wolf says. “We need to create policy recognizing the need for greenspaces in our cities — so people have green places to go just outside their door, just outside their office.”

Catherine Arnold is big on nature and has been published in the Washington Post, Bicycling and NBC.com Health.