Sketching a Way to Smart Land Use 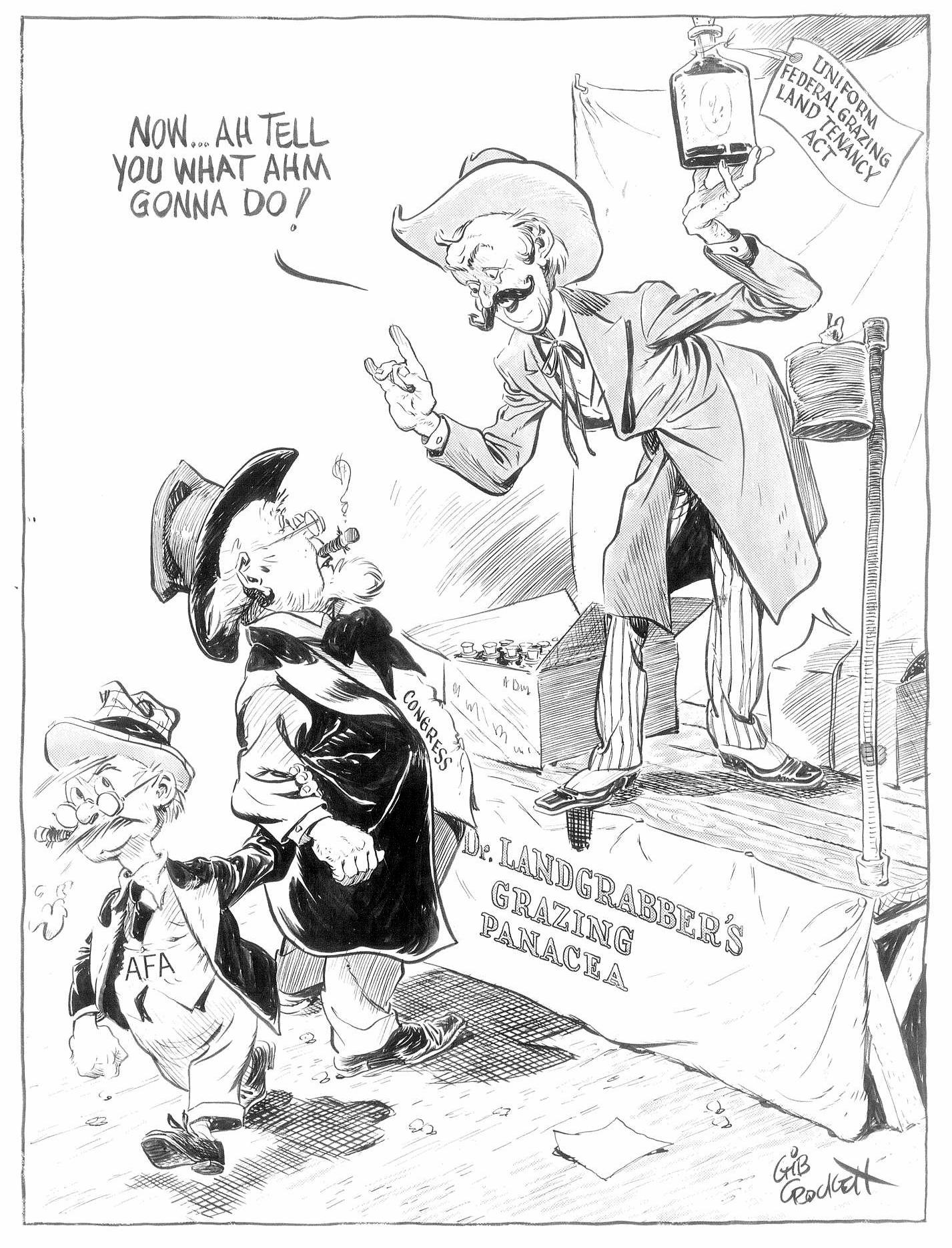 WITH WHAT SEEMS LIKE CONTINUOUS congressional proposals to give or sell federal lands to states or private entities, American Forests is diligent in our advocacy for the smart use of public lands for the benefit of the American people. Ever since the creation of our public lands, there has been debate about how to strike the proper balance in their use, and we have been a part of that debate since nearly the beginning. It has been a staple of American Forests’ agenda since 1875, motivating us to advocate for the Forest Service and the creation of our National Park System. So it’s not surprising that a peek into the past of American Forests magazine would reveal that these issues appeared in the publication throughout our history. But what may be unexpected is the form this sometimes took: cartoons. Gib Crockett was an award-winning American editorial cartoonist. Best known for his prolific career at the Washington Evening Star, Crockett also did freelance work. In the 1950s and 70s, American Forests had the pleasure of publishing several of his cartoons in our magazine — sometimes even reworked to feature the organization. The cartoons brought wit and humor to some of the most divisive environmental issues of the day. As it turns out, these issues are no less relevant today and the cartoons continue to resonate in American Forests’ advocacy work.

The tension surrounding grazing on public lands dates back to when vast acres of land were first acquired by the United States. Livestock grazing took over much of the expansive lands of the West — at first, with no objections. New lands acquired by the United States in transactions such as the Louisiana Purchase were simply public domain. But with use by many different industries and interest groups, it wasn’t long before the land was shouldering a heavy burden; soon, attempts were made to prevent over-grazing and soil deterioration that was largely associated with the livestock industry. In order to do so, there needed to be orderly use of public lands and jurisdiction to enforce it. In 1953, American Forests successfully advocated against the Uniform Federal Grazing Tenancy Act. Known as the “stockmen’s grazing bills,” H.R. 4023 and S. 1491 attempted to create a monopoly for a small number of people within the western livestock industry, to put “certain, privileged livestock operators at the top in management of our western public lands,” as Arthur H. Carhart put it in “They Still Covet Our Lands,” in the April 1953 issue of American Forests.

In Gib Crockett’s After Four Years, the Same Old “Pitch” Man, these operators are depicted in the form of a stealthy snake oil salesman, peddling hooey to a susceptible government. According to a Washington Post editorial of that year, it was a “thoroughly mischievous bill to give stockmen what amounts to a property interest in public grazing lands in the national forests.” This attempt was one in a line of what was known at the time as “The Great Land Grab.” Lobbyists proposed numerous ways to transfer land rights from the American people to those with their own limited interests in that land. 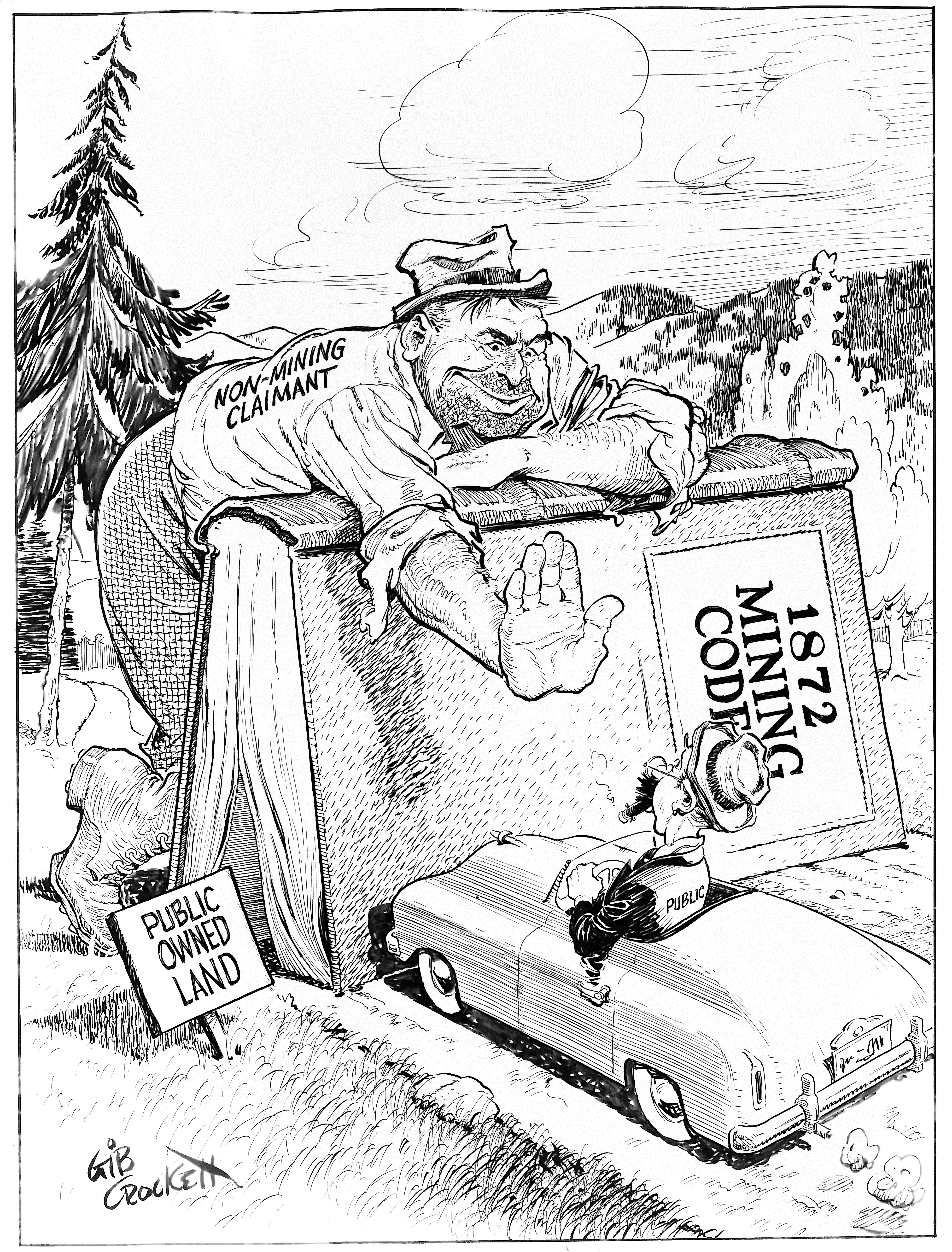 While Crockett’s American Forests — in the form of a shrewd, no-nonsense, bespectacled man — is shown dragging the federal government away from its temptation, in real life, we were not alone in our opposition to the bill. (In fact, this may be reflected in other versions of the cartoon, in which the bespectacled man is labeled simply “Public.”) Other livestock industry representatives, as well as those with other businesses that depend on the public land, conservation groups and notable members of the public expressed their concern over the bill. A representative from the Izaak Walton League of America, a current and long-time partner of American Forests, said at the time that “the Secretary of Agriculture today is the official agent of the general public, who are the real owners of the national forests. This bill would make the Secretary subservient to those relatively few persons who enjoy the privilege of grazing on those public properties.” Former First Lady Eleanor Roosevelt also commented “We cannot trust private 1875–2015 interests not to overgraze the lands … Human nature being what it is, we cannot expect from individuals as great a concern for the good of the country as a whole as for their own particular desire of the moment …”

With the efforts of key conservation groups, private interests, and the Eisenhower Administration, the bill ultimately failed. However, the issue remains, and American Forests continues to advocate for the smart use of public lands for the health of our forests. While we have not been as active with grazing permits on national forest lands lately, we have advocated for smart policies regarding other uses of our public forest lands including the limitation of hydraulic fracturing in national forests and increased restoration efforts to counter the effects of abandoned mine lands in forests. In fact, mining on forestland is another issue that has been on American Forests’ radar since close to the beginning.

When it comes to mining, one historical example of contrasting interests is the still-relevant Mining Act of 1872. Ever since its creation, the law has been under immense scrutiny. The Mining Act was created in response to the newly acquired land in the American West. In the chaos of the 1848 California Gold Rush, Congress was eager to stimulate public interest in settling the frontier. The incentive they used was simple: Move west, find a patch of the newly acquired federal land, mine precious metals on it and keep profits with no payment to the government. Centuries later, little effort has been made to fix the problems this law created. 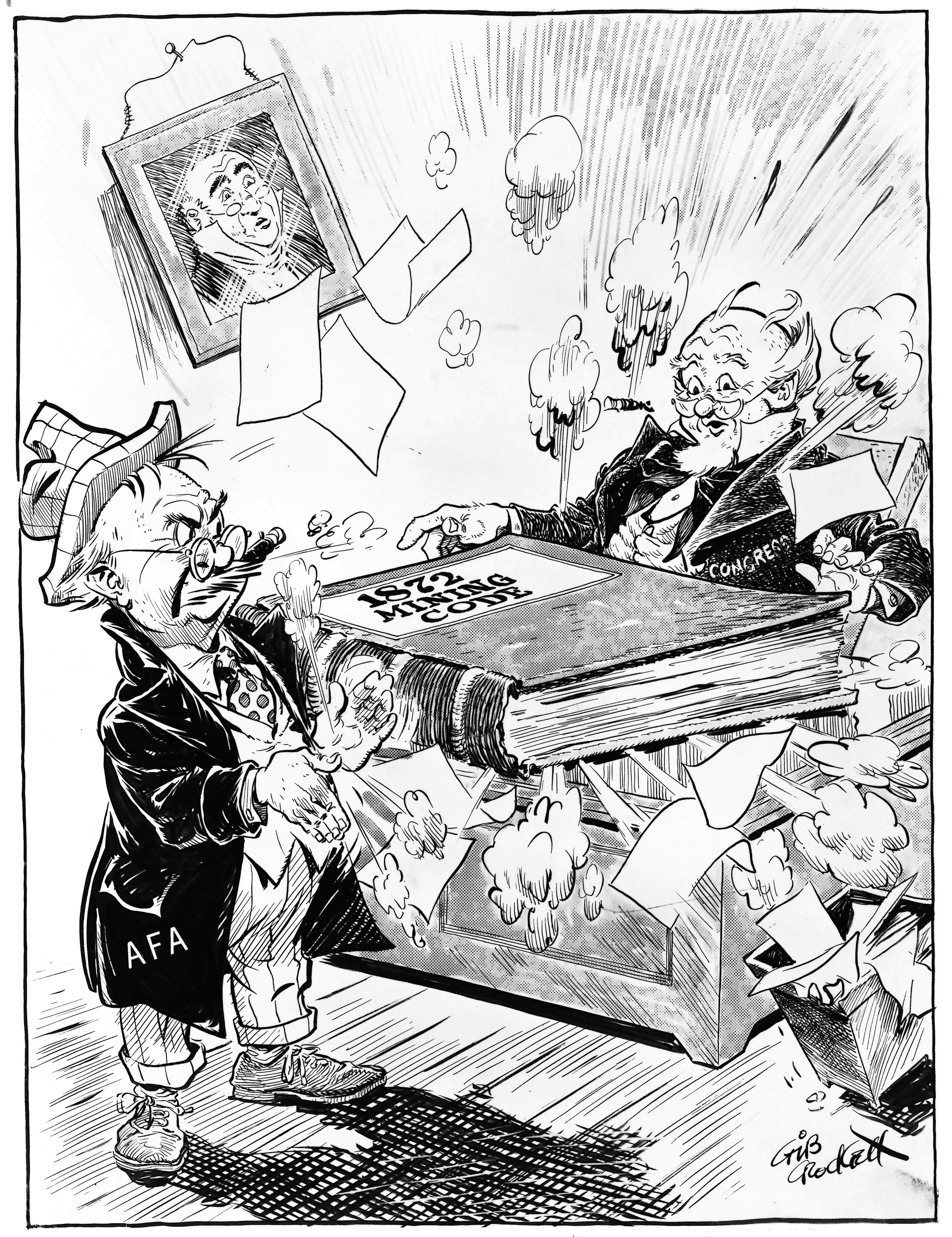 At the time the law was enacted, awareness of and concern for the environmental impacts of different types of land-use was minimal. But the nation was on the cusp of a new mentality toward natural resources. The founding of American Forests just three years after the mining law was enacted led to a new meaning for the term “conservation” — one of conserving our natural wonders and natural resources. Since then, American Forests has expressed the need for mining law reform to protect our public lands from destructive mineral development and to include the public in decisions about the best use for public lands. Mining techniques have become increasingly damaging to the environment. Intense mining operations compromise growing conditions for many trees, making natural regeneration difficult or impossible without help. Yet, because of this decades-old law, mining on public land still allows for miners to dig a fortune from public land without giving a share to the citizens who own it. Crockett expresses the irony of this concept in a cartoon accompanying the 1953 American Forests article, “Two Determined Women.” The 1872 Mining Code gives sizable benefits to the special interests depicted as larger-than-life bullies — not just miners, but also others using vague language and loopholes in the law to their advantage — but strips the public’s right to decide what they want to do with their lands, even as those lands are nominally designated as “public.”

American Forests has long supported the need for increased provisions regarding mining operations on public lands. Another Crockett cartoon depicts the organization — or, in other versions, simply the public — as impatiently pushing for the much needed reform of the 1872 Mining Code. While it is important to recognize the benefits of having a source for domestic minerals, American Forests advocates for the responsible use of our national forests by balancing natural resource allocation, tourism industries, commercial interests and public use. A law that allows mining companies to transform public land into private land for no more than five dollars an acre is not a law that considers the best interests of our nation’s forests — or our nation’s people. American Forests continues to advocate for safe mining practices in order to help protect forest health. Today, we also reforest and restore areas that have been damaged by mining practices through our Global ReLeaf program, planting trees on lands damaged by surface mining activities. Efforts to reclaim minefields are an important part of our mission to protect and restore forests.

To learn more of our advocacy efforts, visit our Action Center and become a Forest Advocate to receive Action Alerts notifying you of opportunities to engage your elected officials on these and other issues.