Teaching Among the Trees

By Ruth A. Wilson

State and national forests are often used as outdoor classrooms, but in some places, the forest isn’t just a classroom: it’s the school itself! These outdoor schools — designed for young children, usually ages three to five — are called “forest kindergartens” or, in German, “waldkindergartens.”

“Waldkinder” means “children of the forest,” and in Europe, waldkindergartens abound with many such programs having no building at all. Forest kindergartens are especially popular in Germany, where there are now approximately 450 such programs, some partially supported by the government. 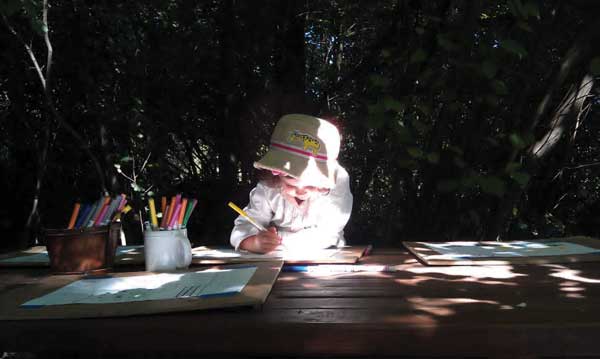 Forest kindergartens gained momentum in Europe in the 1950s and 1960s, but support for the idea goes back farther than that. Friedrich Froebel, a German educator — and earlier, a forester intern — developed the concept of a “kindergarten,” literally translated as “children’s garden,” in the early 1800s. He put his ideas into practice by actually working with young children in a garden setting and taking them on excursions into the countryside. Froebel’s ideas inspired others to establish kindergartens with actual gardens and a play-based curriculum.

A look at most kindergartens in the United States today reflects a very different focus. Kindergarten has become part of the formal education system with teacher-directed lessons being conducted in indoor classrooms.

But people are getting concerned. After the 2006 publication of Richard Louv’s book, Last Child in the Woods, we’re seeing a push to get kids outdoors, not just for recreation, but also for education. Educators and other adults concerned about children and the environment are asking, “How can children develop a caring relationship with nature without spending time outside?”

This push to get kids outdoors is growing rapidly, both nationally and internationally. The recently developed Nature Action Collaborative for Children has more than 1,600 members from six continents. Other growing initiatives focusing on children and nature include the Children and Nature Network and the National Wildlife Foundation’s “Get Outside” program. While forest kindergartens are still very rare in the United States, there are a few.

Cedarsong Nature School was the first school in the United States to open a forest kindergarten. This nonprofit school located on Vashon Island near Seattle was founded by naturalists and childhood educators Erin Kenny and Robin Rogers. Kenny, now principal of Cedarsong, says that she is “passionate about connecting our youngest children with nature so that they can develop early a lifelong compassion for the natural world.” These children, she notes, “will grow up to be our next forest stewards.”

While there were some concerns, at first, about how parents and children would respond to the idea of a school without a ceiling or walls, the response to Cedarsong has been overwhelmingly positive. There’s currently a waiting list — this in spite of the fact that indoors is not an option. Rain or shine — and on Vashon Island, there’s a lot of rain — children are outdoors the entire time. They come prepared with raincoats, mittens, hats and rubber boots.

Mother Earth School is a part of Tryon Life Community Farm, just 20 minutes from downtown Portland, Oregon. Preschool children attending Mother Earth School spend their entire time outdoors enjoying and learning from the seven-acre permaculture farm and the adjoining 650-acre state forest. Storytelling, songs and puppetry all take place outdoors. Children also help with tasks such as baking whole grains in the outdoor kitchen, growing fruits and vegetables, and caring for farm animals. In the forest, they build shelters, play with natural materials and explore the many facets of life in the woods, including camouflage and decomposition. 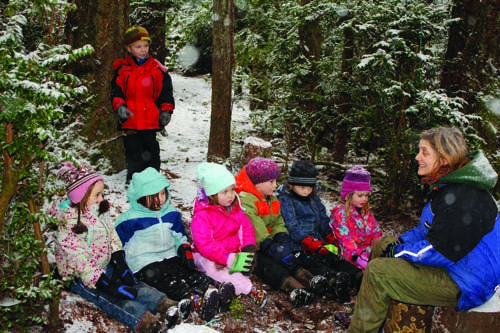 Woodhaven in Oregon has a one-day-a-week program for four-year-olds with the entire four-hour session being outdoors. Goals of the program include helping children gain independence and a sense of inquiry through interactions with nature, while also developing respect for others and the Earth.

On the East Coast, the Waldorf School of Saratoga Springs, New York, offers a forest kindergarten on state park land, where children have hundreds of wooded acres to explore, discover and learn to love the world of nature. While the curriculum includes many of the activities of a conventional early childhood program (story time, arts and crafts, circle games, etc.), all of the activities take place outdoors and focus on nature as a unifying theme.

The first students from forest kindergartens in the U.S. are just now entering the public school system, so it’s too early to tell what long-term benefits the nature immersion program has had on them. Parents of children from these programs report that their children have great problem-solving skills and critical-thinking abilities. One parent attributes her child’s “low frustration and high perseverance” to the extended periods of time outdoors in a natural environment. Studies on forest kindergartens in Europe report positive gains in self-confidence, sense of independence, stamina, coordination, motivation and concentration, in addition to other personal and academic benefits.

Will forest schools continue to grow in popularity in the U.S.? Kenny has no doubts about it: “I know the movement is growing by the sheer number of requests I get for more information about how to start a forest kindergarten.” Such requests, she notes, reflect the power of the natural environment to promote learning and the need for humans to stay connected with the world of nature.

Ruth Wilson writes from Albuquerque, New Mexico, and can be reached at wilson.rutha@gmail.com.

Why I’m Here: Passing it On

Meet our new editorial intern, Nick, and read about his inspiration for conservation.

Getting Serious about Soil Part 2: Involving the Next Generation

In the second installment of this three-part series on soil, learn about a program to teach children the importance of soil.

Playground Science: Getting Kids Excited about Science and Nature

Want to help your kids appreciate and understand nature? Here's some tips for fostering an inquisitive mind for the wonder of nature!