The decline of whitebark pines threatens the Greater Yellowstone Area, as researchers search for solutions. 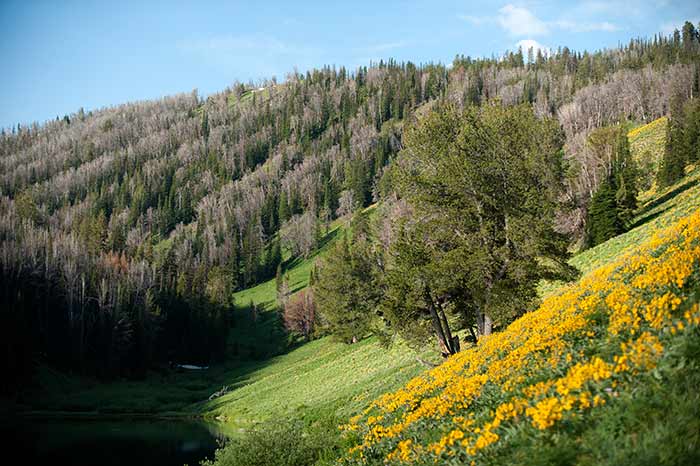 Karl Buermeyer stops his white pickup ON THE SIDE OF A DIRT road and motions to a few whitebark pine trees rising from a mat of pinkish-purple fireweed. On one of the tree trunks, there’s a scar of missing bark. Thick streams of now-solidified sap have spilled over the wound. A non-native fungus brought over from Europe called blister rust made a sugary canker that rodents subsequently gnawed away — hence the missing bark. Everything above the point of infection will eventually die, including the tree’s cones. If the tree can’t produce cones, it no longer contributes its genes to the landscape and is considered by researchers and forest managers to be ecologically dead.

Back in the pickup, Buermeyer, a vegetation manager for Bridger-Teton National Forest, drives deeper into the heart of the Mount Leidy Highlands, an area just east of Grand Teton National Park in northwest Wyoming. This is wild country. Most of the peaks range between 8,000 and 10,000 feet, and the area is thick with predators such as grizzly bears, mountain lions, Canada lynx and wolves, along with prey species like elk, moose and deer. 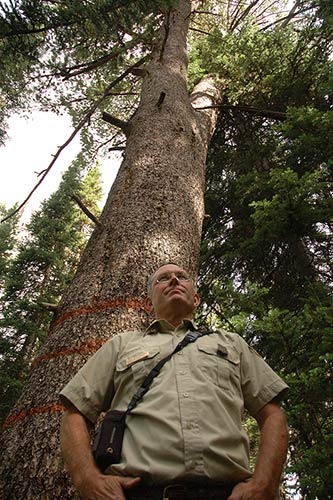 As Buermeyer drives, the forest opens, and large patches of fireweed give way to sagebrush, which in turn give way to groves of aspen and finally to forests of lodgepole pine, subalpine fir and spruce. Occasionally, whitebark pine branches — each branch sporting a pair of dark-purple cones at its tip — stretch skyward. But among the healthy conifers, dead trees are readily apparent.

A broad, high-elevation valley appears, and we get our first good look at the scope of the devastation. Beetle-killed pines — called ghost trees because of their gray trunks and branches denuded of needles — stand among the live spruce and fir. An entire west-facing slope of Mt. Leidy is covered with dead whitebark. In the Rocky Mountains from Colorado into Canada, blister rust has conspired with native mountain pine beetles against high-elevation forests, leaving massive destruction in their wake.

At risk is an iconic American landscape. The 20-million-acre Greater Yellowstone Area — a region of mostly contiguous habitat in Idaho, Montana and Wyoming — is one of the last ecosystems with a full complement of flora and fauna in the lower 48 states. Whitebark pine sits atop that ecosystem, serving as the anchor for high-alpine and watershed habitats and as food and shelter for species ranging from Clark’s nutcracker to the grizzly bear.
As of 2009, about 95 percent of Greater Yellowstone’s whitebark pine habitat had experienced some mortality, says Dr. Jesse Logan, a retired entomologist with the U.S. Forest Service. Fifty percent of the ecosystem’s whitebark “have been impacted to the point where you lose ecosystem function,” Logan says.

The loss of ecosystem function means snow will melt faster, causing more runoff in the spring and less water in creeks and rivers during the summer. Grizzly bears, which rely on the seeds to build up fat for the fall and winter, will likely seek more food near the valleys, putting them in danger of conflicts with humans. Whitebarks will no longer anchor soils and provide protection for other high-elevation plant species.

While researchers, environmentalists and land managers have rallied to save the species, the outlook is grim. “The bitter irony is that just as we’re learning about how important whitebark pines are, we’re losing them,” says Louisa Willcox with the Natural Resources Defense Council (NRDC). “That is a heartbreaking thing to realize.”

In the early 1900s, blister rust — which only infects five-needle pines, like whitebark — entered the United States by way of ships that brought the fungus on white pine seedlings from Europe.

“This organism has what is considered the most complicated life cycle on the planet,” says Dr. Diana Six, a professor of forest entomology and pathology at the University of Montana. “It’s the last organism that I would think would be successful out there.” 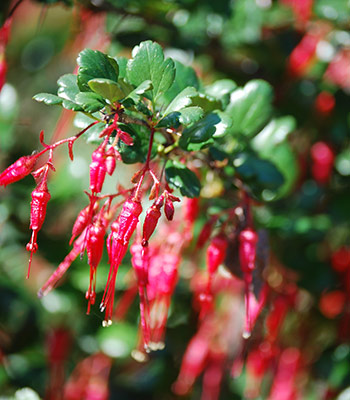 Five-needle pines fall victim to blister rust when a spore lands on a needle or a branch, penetrates and moves down into the living tissue. The fungus then spreads all the way around the branch. Once the branch is completely girdled, it dies. When blister rust finally makes its way into the trunk of the tree, “that’s when it gets super serious,” Six says. “Whatever is above that point of infection dies. When you kill the top of a whitebark pine, that is ecological death.” 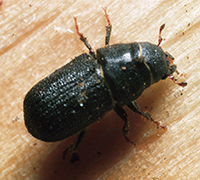 The fungus has spread across the country from both coasts to at least 38 states, infecting five-needle pines such as sugar, west limber and whitebark. In Wyoming, researchers first discovered the fungus in ribes species in Yellowstone National Park in 1944. In Greater Yellowstone, 20 to 25 percent of five-needle pines show evidence of blister rust.

But blister rust isn’t the only threat facing Greater Yellowstone’s five-needle pines. Unlike blister rust, mountain pine beetles are a native insect that co-evolved with western forests, which means that some species, like lodgepole pine, have developed chemical and mechanical defenses against the bug. Before temperatures began to warm, these pines might have coped with the beetles. A healthy tree could “pitch out” the invading beetles with a rush of sap, but whitebark pine live at elevations where the climate was too harsh for the beetle to survive for long. Therefore, whitebarks developed few of the lodgepole pine’s defenses. Only during periods of particularly warm weather could beetles make it high enough to infest whitebark tree stands.

It was by studying one of these warm periods that entomologist Logan and his colleagues first got a hint of the troubles to come. “In the 1930s, there was

[whitebark pine] mortality that was associated with mountain pine beetle,” Logan says. “It was really warm for a period of time.”

Warm weather helps mountain pine beetles avoid the deep spring and fall freezes that can kill the beetle before its cells can protect themselves with a natural defense that can be described as the insect’s version of antifreeze.

By the first Intergovernmental Panel on Climate Change in 1990, Logan was running simulations on warming scenarios and whitebark. “The results indicated that, with a general warming climate, we could really begin to see problems in whitebark,” Logan says. “Both the extent and intensity of mortality — the productivity of beetles and how the tree seems unable to defend itself — all struck us from the beginning.”

“Not only is whitebark not well defended like lodgepole, but the defensive chemistry is backwards,” Logan continues. “Whitebark is high in compounds that the beetle uses to signal other beetles to focus attacks on the tree.”

By 2003, a beetle outbreak unprecedented in known human history began to sweep across the Rocky Mountains. In 2005, Canadian researchers used Doppler radar to document a beetle hatch that produced an estimated average of 4,950 beetles per hectare with a maximum of 18,600 beetles per hectare.

Environmental photographer James Balog has used time-lapse cameras in seven locations across the Rocky Mountains to document beetle infected lodgepole, ponderosa and whitebark pines. “To our absolute and utter astonishment, by the fall, we had dead trees in every picture,” Balog says.

“The most captivating time-lapse sequences go from summer to winter,” Balog continues. “You watch the tree go from green to red then a dried out, dusty orange, and then, the needles start falling off. When you get these sequences weighted down with these big snowstorms, it’s very beautiful. It’s a dichotomy of the sadness and the horror of the tree dying and this beauty.”

Farther along the dirt road of the Mt. Leidy Highlands, vegetation manager Buermeyer unlocks a gate, and we head to the base of Grouse Mountain. Here, the Rocky Mountain Research Station is conducting an experiment to find out the best way to regenerate whitebark pine. 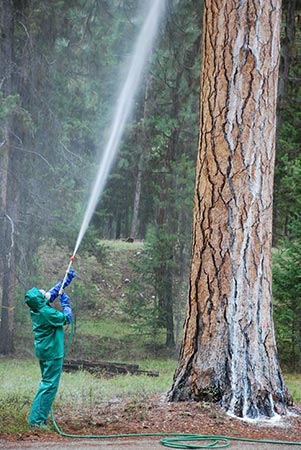 We park and bushwhack into the forest to see one of the largest whitebarks in the Greater Yellowstone Area. Forest Service crews have marked this 96-foot-tall behemoth with spray paint and have sprayed it down with a beetle insecticide called carbaryl. This is one of several “plus trees” in the region, trees that researchers and foresters have identified as potentially being genetically resistant to blister rust.

Every year, certified climbers scale the trunks to the top of plus trees and encase the cones with metal baskets to prevent the seeds from being harvested by Clark’s nutcrackers, red squirrels and other species that feast on the cones. After the seeds mature, the climbers return, remove the baskets and harvest the seeds. The seeds then go to a greenhouse in Coeur d’Alene, Idaho, where they are raised to seedlings and bombarded with blister rust spores. The seedlings that survive are then deemed suitable for replanting.

Some of these rust-resistant seeds could find their way to Grouse Mountain. As we walk toward the peak, Buermeyer points to plastic flagging around the trunks of trees used to indicate test plots for the Grouse Mountain experiment.

Ahead in the distance, Buermeyer spots a Clark’s nutcracker. The bird chatters raucously as it flits from one whitebark to another, stuffing its sublingual pouch with seeds that it will later cache in various nooks on the landscape for safekeeping. Researchers think this noisy little bird is almost entirely responsible for natural whitebark pine reproduction. “In a good cone year, [Clark’s nutcrackers] cache more seeds than they can eat,” entomologist Logan says. “Some of these seeds are not utilized, and that’s where the new trees come from.”

Therefore, another technique researchers are testing in the Grouse Mountain experiment is logging small patches of forest to create the kind of clearings where the Clark’s nutcrackers like to cache their seeds.

As we continue to climb, Buermeyer leads us out onto a ridge overlooking a broad bowl rimmed with dead whitebarks. This is where researchers hope to plant 1,000 rust-resistant whitebark seedlings. 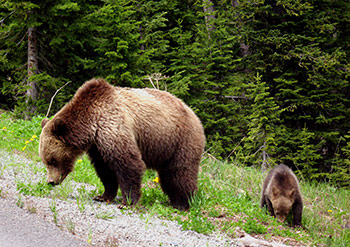 It’s hard not to get discouraged. Beyond a few trees at the bottom of the bowl, every mature whitebark pine is dead. Some of these trees were so old that they likely existed before Europeans ever set foot in the Mountain West. The most ancient whitebark pine is thought to be roughly 1,250 years old. With such a long life cycle, whitebark pines typically take 60 to 80 years to fully mature. It’s unlikely Buermeyer and I will ever see this view restored with mature whitebark pine trees.

If the current trend of a warming climate continues, the outlook is even bleaker. “Eighty years from now, most of the U.S. will not support this tree,” professor Six says. “They’ll never get to move up to the top of the mountain because the mountain pine beetle will take them out.”

Still, with the U.S. Fish and Wildlife Service’s 2011 announcement that the tree warrants protection under the Endangered Species Act, but is precluded by other, higher priority species, whitebark pine trees have gained notoriety and research dollars, says NRDC’s Willcox.

By planting rust-resistant seedlings and with other restoration activities to help the whitebark pines that already exist, researchers and land managers say there’s still time to ensure that the species maintains a presence in the Rocky Mountains.
Another rowdy, Clark’s nutcracker call brings a hint of hope. Buermeyer hands me one of last year’s whitebark pine cones picked clean of its seeds. A few steps more and I find one of this year’s cones, also picked clean, its seeds destined for a dark hole in the soil. 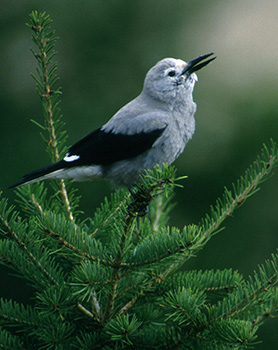 Cory Hatch writes from Victor, Idaho; is a freelance science journalist; and serves as wildlands director for the Jackson Hole Conservation Alliance.

Thank you to the U.S. Forest Service for its support of our public outreach and education efforts.