Home/Returning to a Land That Owns Us 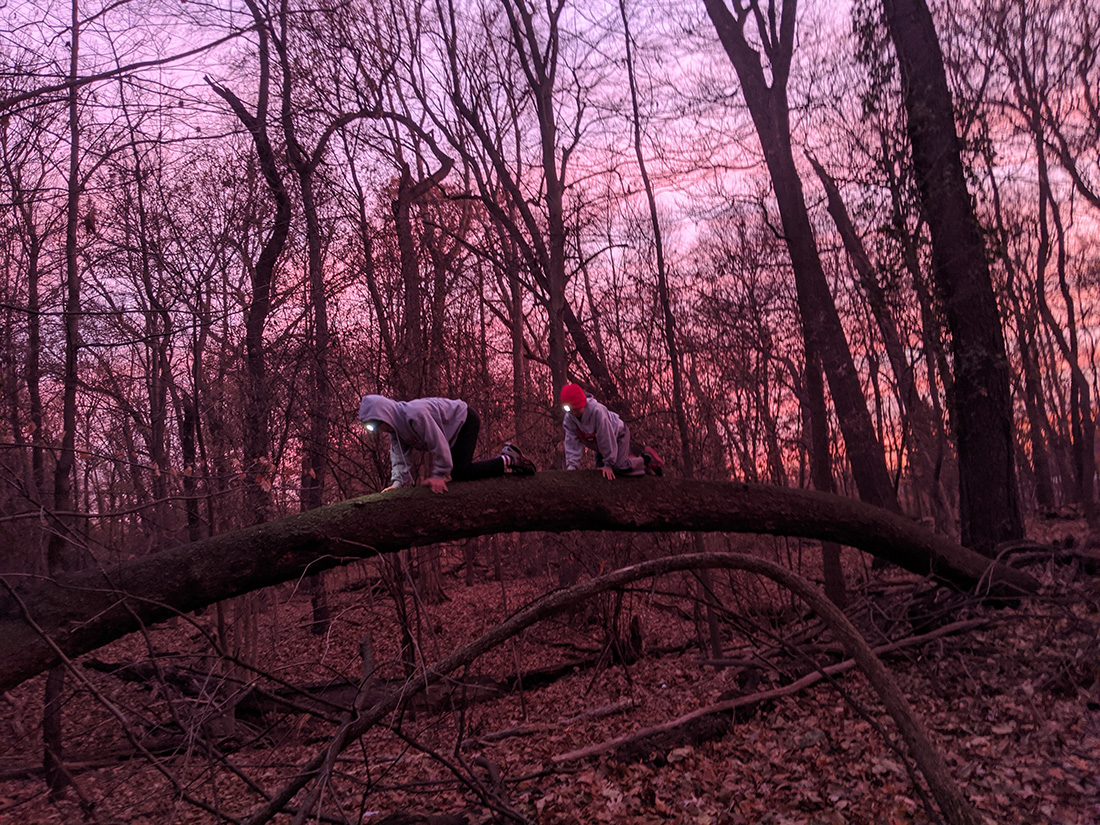 Ian Leahy’s nephews play among the trees in the woods behind his childhood home in Royal Oak, Mich. Credit: Courtesy of Ian Leahy.

“WHY DO YOU WORK WITH… TREES?” That last word singed with disappointment. I already felt somewhat infantilized, sitting in the backseat as my close friend from college and his wife deftly navigated Los Angeles traffic for what would turn out to be a laughably bad night of theater.

He was that friend who unlocked my latent intellect in college, introducing me to arthouse cinema and late-night musings on the meaning of existence. These days, his mind is far more grounded in a successful entertainment industry career and wonderful family. Mine kind of got stuck on that whole “meaning of existence” thing.

My response to his query could have come from a press release. I rattled off some of the benefits of urban trees and told him to check out Vibrant Cities Lab.

I understood what he was really asking. He once knew a version of me that had seemingly loftier ambitions than city infrastructure. After college, I would walk away from offers many dream of, from New York publishing to Hollywood. Yet, if I had that backseat moment to do again, I would have spoken from a deeper place: “Trees are a gateway to… everything.”

LISTENING TO THE TREES 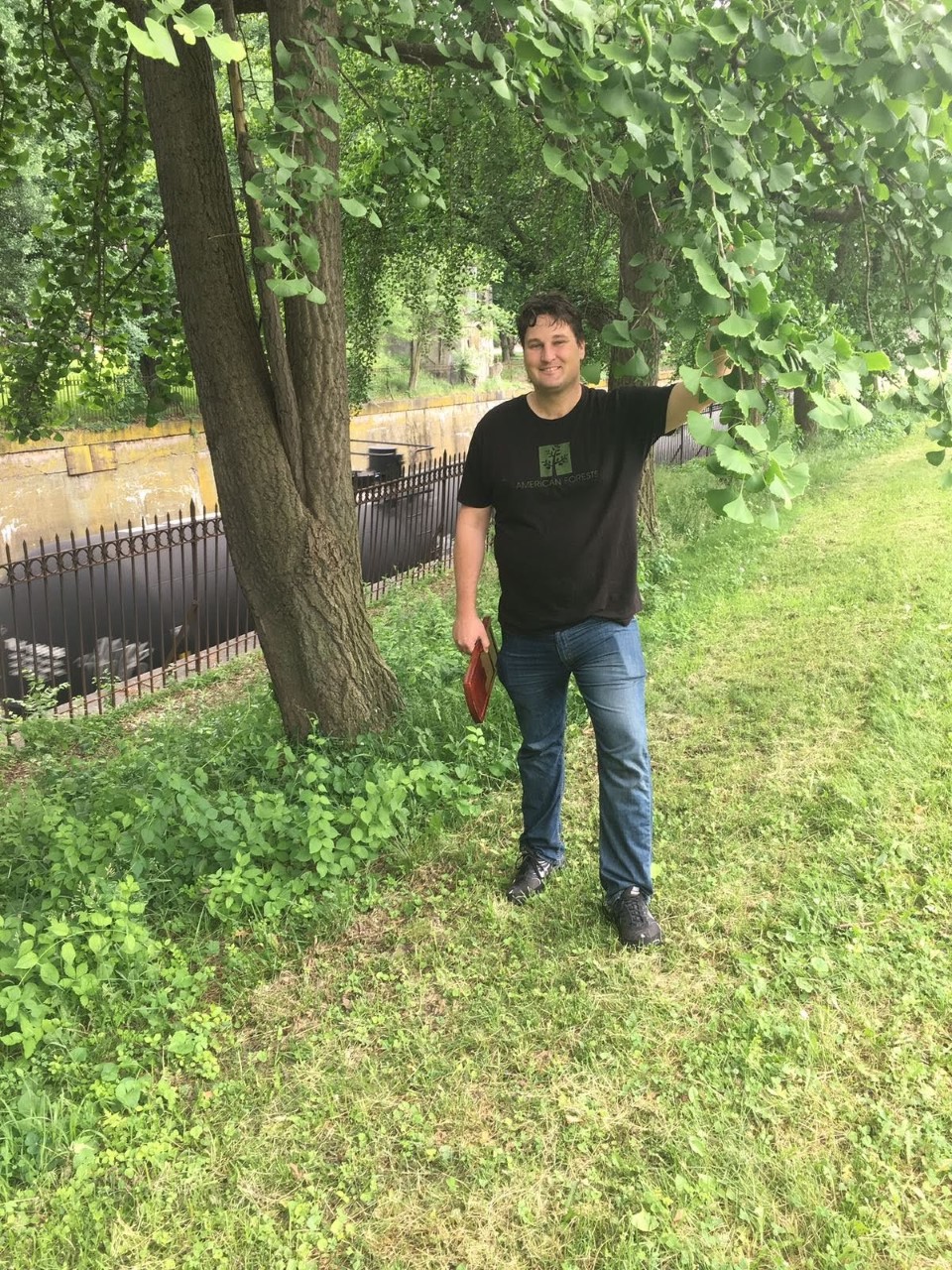 Maybe the woods near my childhood home had a deeper impact than I realize, embodying that first taste of unsupervised freedom and the intoxicating impulse to subdue nature with trails and bike jumps. But trees were not always my driving passion.

What really drew me into urban forestry was watching, just to the south, the collapse of Detroit, a city that generations of family stone- masons, clockmakers and autoworkers helped build. Each Devil’s Night, the once dubious evening of mischief before Halloween, we would gather to watch the city aflame.

Meanwhile to the north, fields and forests where I once trailed my brother and his friends as they waged epic battles between kingdoms, turned into subdivisions and strip malls. The night sky that once split our yard — starry to the north, faded to the south — became washed with city light.

As a teenager immersed in this landscape of extremes, it struck me that we’re missing something big. That compelled a life-defining question: How do we build a civilization that actually works?

Soon after, I committed my life to an experiment following intuition regardless of outcome. It kept pulling me back to trees as if they held an answer I couldn’t yet grasp. My first urban forestry position after college, at American Forests, was both a baptism in federal policy and a revelation that what we’re missing doesn’t reside in politics or economics, but rather our psyches.

So, I left D.C. and spent five years on Lake Superior exploring frontiers of the mind, testing each new idea in the visceral world of my landscaping business and live theater. That journey culminated on the edge of a forested city park, where I instinctively responded to seemingly random occurrences in nature — a spider crawling, bird flying, leaf flickering, among thousands. Before my rational mind could negate the sense, I moved toward each. The first time, I was guided to the largest tree in the park. The second, an image flashed in my mind of a compost pile to which I was then guided.

It felt like nature was communicating with me. As if the seemingly separate components of a forest actually function as a singular, sentient entity. While this ability has proven to be fleeting for a primitive, modern mind like mine, a recent trip to speak in the Australian Outback revealed that such a connection to nature has long been fundamental to Aboriginal cultures.

While there, I met Dr. Monica Gagliano, who has published research revealing plants make decisions long assumed to only occur in organisms with brains. Her “phytobiography”, “Thus Spoke the Plant”, boldly tells how dreams guided her to a specific tree and Indigenous shaman in Peru where she spent weeks communicating with that tree.

Today, only a single trail slices through my childhood woods, trodden by dutiful joggers heading elsewhere. At a time when our impact on nature has never been more evident, our connection to it seems most severed. Yet, Dr. Gagliano claims that trees and plants are trying to communicate with us before it’s too late.

Detroit’s narrative today is one of unbalanced resurgence largely in mixed-use areas. The lack of any real economic drivers compelling that shift points to a culture yearning for integration. My calling is to help people have nature wherever they live and learn to engage at this unified, enchanted level. From there, we might create economies that rise above both competition and regulation. Politics could transcend partisanship, accounting for both the individual and collective simultaneously. Even technologies could harness this connection. In short, we could build a civilization that actually works.