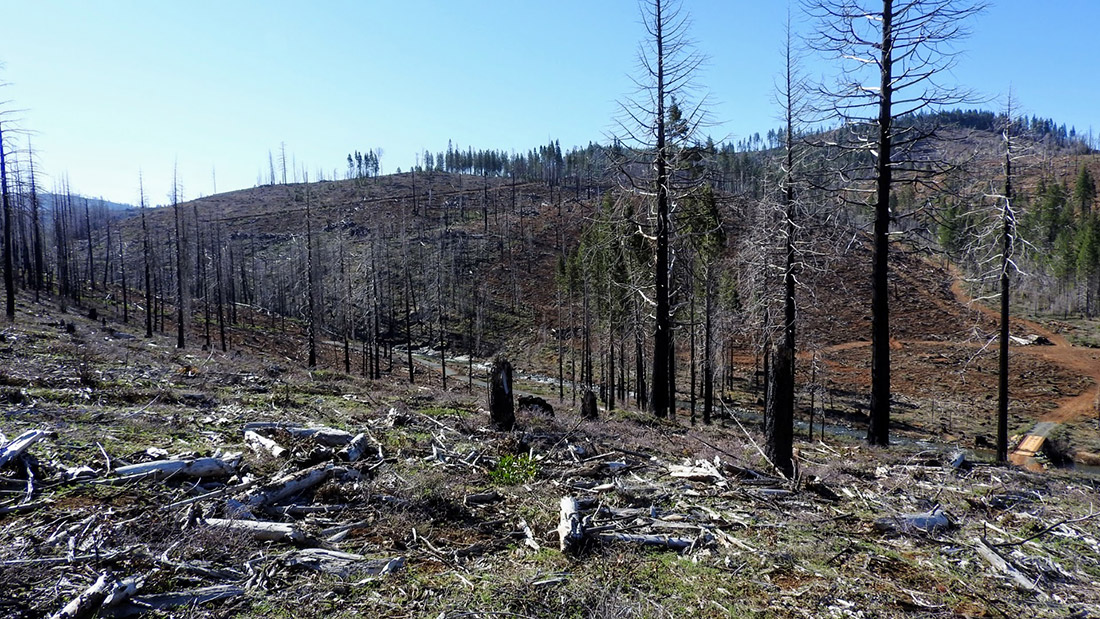 American Forests’ planting site at Pilot Creek, which flows into Stumpy Meadows Lake and serves as a source drinking water for Georgetown, Calif.

IN 2014, CALIFORNIA’S KING FIRE BURNED nearly 100,000 acres of ponderosa pine, sugar pine and Douglas-fir in and around Eldorado National Forest in the Sierra Nevada. The fire was one of the most ecologically damaging wildfires in California history. In the northern portion of the fire, more than 30,000 acres burned so intensely that no trees survived.

American Forests has worked with partners in situations just like this for more than 30 years. In fact, our partnerships have led to the planting of nearly 60 million trees since then. These tree plantings have undoubtedly provided the public benefits by jump-starting the development of wildlife habitat, protection of water quality, and sequestration of carbon.

Yet, the effects of climate change — rising temperatures, prolonged drought and more and larger fires — are testing this strategy and forcing agencies and conservation groups to play catch-up across the country. Severe wildfires, pest outbreaks and other impacts can lead to declines in the capacity of America’s forests to sequester carbon and loss of stored carbon in next few decades. Higher temperatures and prolonged drought, as well as more severe fires, will also hinder our ability to reforest landscapes and mitigate carbon emissions.

To protect forests as our existing carbon sink and to mitigate additional carbon emissions require both an offensive and defensive climate-smart restoration strategy. This model focuses on adding to the existing forest land base and strengthening its forest sequestration power (offense) while preventing forest conversion and reducing the impact of stressors with actions, such as adaptation-focused restoration and management practices on high-risk lands (defense).

American Forests is deploying this strategy in our priority American ReLeaf landscapes, including the Sierra Nevada and Southern California Ranges, Northern Rockies and Cascades, and Lower Rio Grande Valley.

The Rubicon River Overlook faces the ridge of the Sierra Nevada.

The iconic mixed conifer forests of the Sierra Nevada, including Eldorado National Forest, Sierra National Forest and Yosemite National Park, are facing unprecedented threats from drought, pest outbreaks and massive wildfires. The combined effects of these changes and extreme events have real potential to create a permanent conversion of the region’s forests to shrublands and grasslands. These shifts will in turn diminish the natural benefits that the Sierra’s forests provide, including carbon sequestration, water supply and quality, wildlife habitat, recreation, and timber production.

A growing body of science has made clear that a proactive strategy is needed now to sustain these forests given rapidly changing conditions. Since 2010, 129 million trees have died across the state of California, with a majority of those deaths occurring in the Sierra Nevada. Recent research has shown that, as these standing dead trees fall over the next 10 years, they will produce large amounts of fuel and lead to mega-fires that are massive in area and intensity.

American Forests is working with Eldorado National Forest and other partners to test new climate-smart restoration designs to meet these challenges. These include actions that: 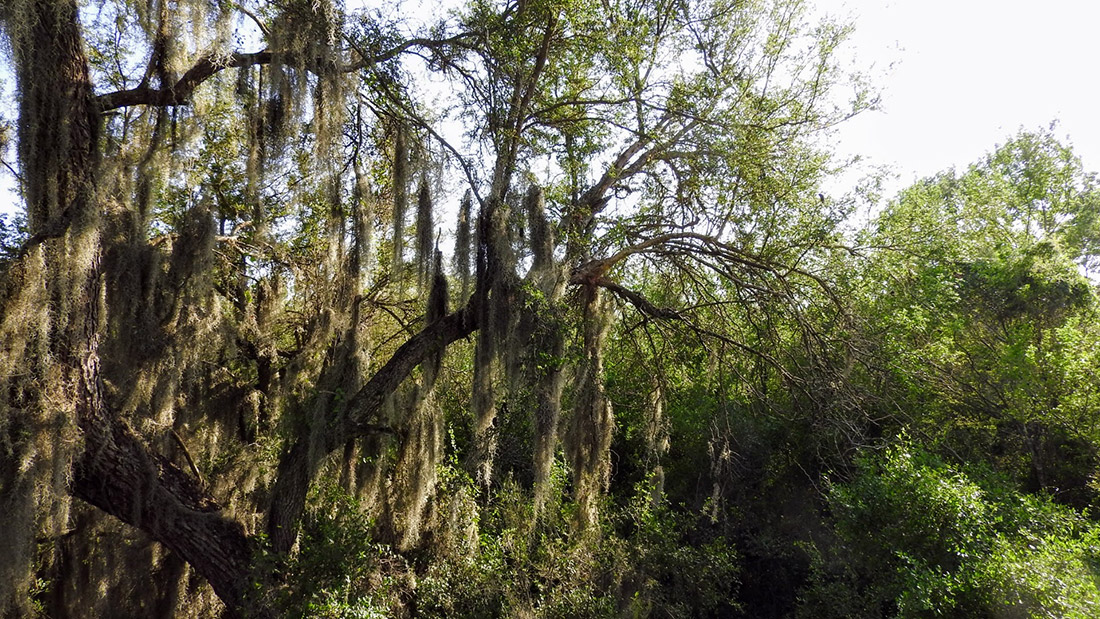 The LRGV is, surprisingly to many, one of the most biologically diverse areas in North America.

Climate change projections for the landscape include more persistent and extreme drought. These conditions will stress the ability of existing thornscrub forests to sequester carbon and hinder our ability to add to the carbon sink by making reforestation efforts more difficult. In addition, climate change is projected to stress the region’s unique biodiversity by causing a northward shift of forest and transition to near-desert in the driest areas of the LRGV. Many wildlife species, like the ocelot, have the potential to migrate as habitats shift, but a lack of suitable core habitat and connecting corridors will limit their success.

American Forests and U.S. Fish and Wildlife Service, South Texas Refuge Complex are partnering to build a drought resilience strategy for restoration actions in the LRGV that will facilitate adaptation of the area’s rich biodiversity while also protecting future mitigation opportunities. Our strategy includes planting a diversity of species, shifting species selection to favor drought tolerant species, using tree shelters to better retain soil moisture, and planting in locations that will serve as corridors for migrating wildlife species. 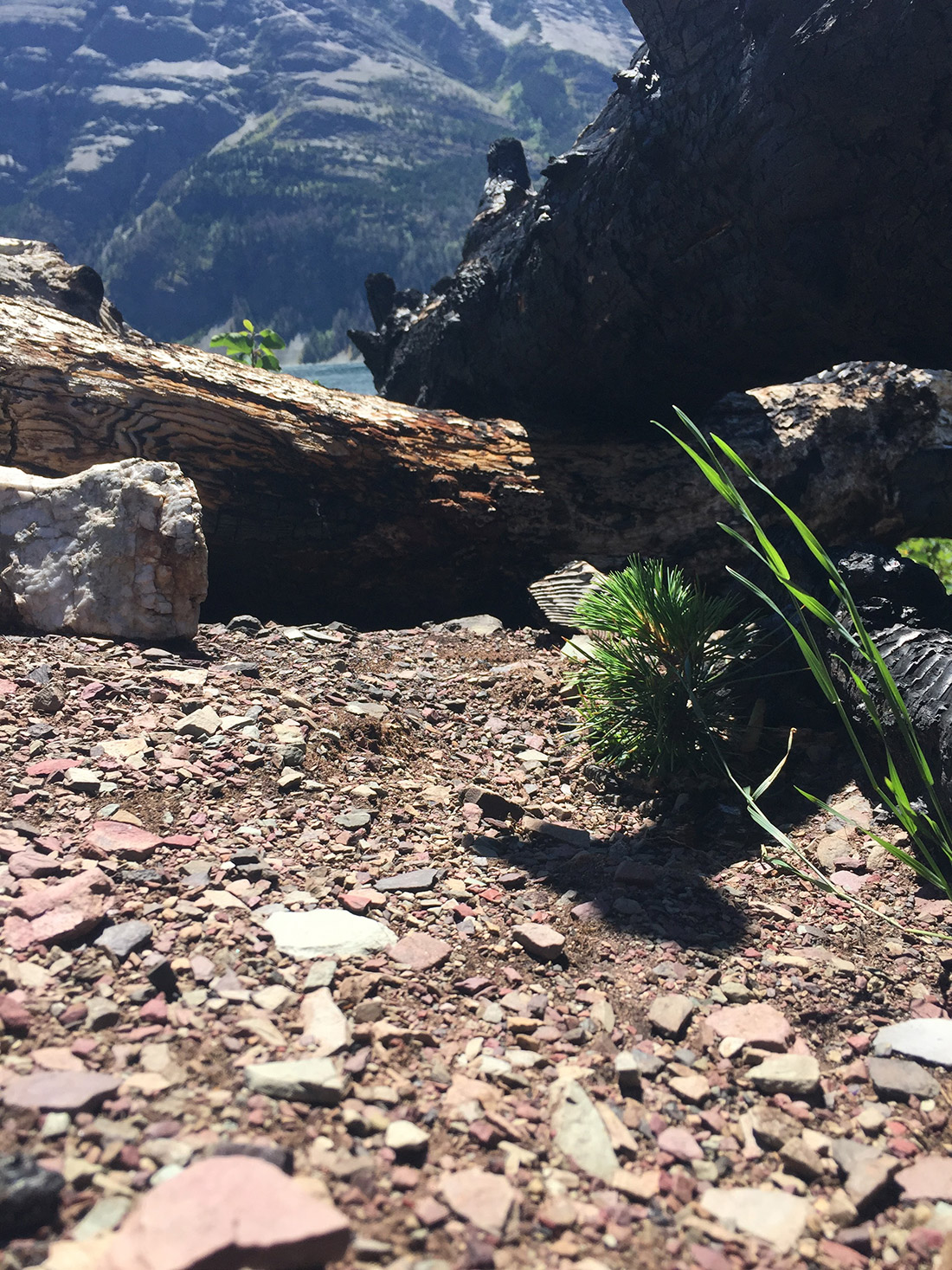 A limber pine seedling growing in the Rocky Mountains in Glacier National Park.

Whitebark pine is a keystone species in the high-elevation regions of the Northern Rockies and Cascades. Their large and nutritious seeds are an important source of food for wildlife in these rugged landscapes for a host of species, including grizzly bears, small mammals and Clark’s nutcracker. When cones are abundant, grizzly bears in the Greater Yellowstone Ecosystem can feed almost exclusively on whitebark pine seeds. Whitebark pine is adept at quickly establishing in open areas, providing the opportunity for trees and vegetation to colonize the area. This ability to establish in remote, alpine areas helps to stabilize soil and accumulate snow, which retards spring runoff, reduces flooding and improves water quality.

Yet, these functions are threatened by climate change as longer periods of warmer, drier weather are fueling unprecedented native pest outbreaks and shifts in the ecosystem’s elevational and latitudinal distribution. The ecosystem is also suffering major declines due to the spread of an exotic disease, white pine blister rust, and the e ects of long-term fire suppression policies. Given these threats, whitebark pine is a candidate species under the U.S Endangered Species Act.

The latest research shows that whitebark pine may be able to respond to fire and drought and adapt to climate change. The catch is that the ecosystem’s ability to adapt in the future is dependent on current conditions and restoration actions we take now. American Forests and the Whitebark Pine Ecosystem Foundation are partnering with the U.S. Forest Service, and collaborating with other federal agencies and tribes across the region, to develop a consensus-based, core-area restoration plan for the U.S. distribution of whitebark pine. This strategic plan will identify selected areas within the U.S. range of whitebark pine for priority restoration, including those areas important for climate adaptation. We will also include our efforts to replant whitebark pine seedlings that show resistance to blister rust in priority locations.

Implementing climate-informed restoration will be key to each of these regions and for meeting our local and national climate goals. America’s forests are powerful natural climate solutions as they sequester approximately 855 million metric tons of CO2 each year, or 15 percent of U.S. annual emissions at current levels. Furthermore, reforestation is one of the most promising strategies for making gains in carbon storage. American Forests’ restoration efforts provide demonstrations for how these forest-provided benefits can be sustained.