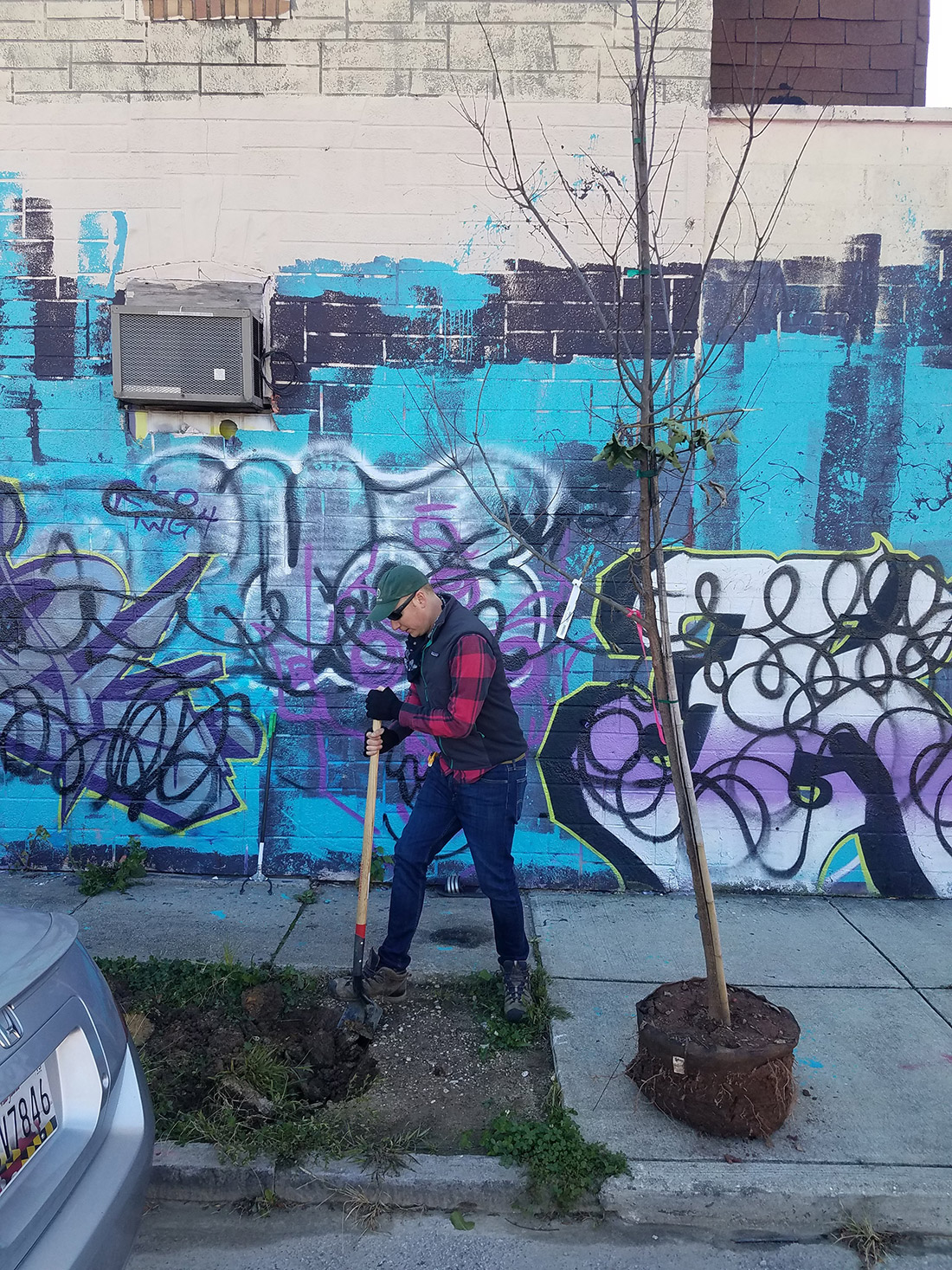 IT’S HARD TO EXPLAIN the allure of Camp Small. Tucked into the northern edge of dense Baltimore, piles of stacked logs loom precariously overhead as you wind into its depths. For generations, this sort yard has collected the city’s removed street and park trees.

It’s not that Baltimore takes down more trees than other cities. Many others just take the chips or logs to a dump where their value rots away and stored carbon leaks into the atmosphere. Believe it or not, more wood is removed from America’s urban forests than the entire U.S. National Forest System. Baltimore alone adds 8,000 to 14,000 tons to Camp Small every year from trees that fall in storms or are removed for safety reasons.

Seeing such potential in one place can change a person.

This stockpile has haunted me since my first stint at American Forests in 2000, spearheading what would become the Baltimore Center for Green Careers. It wasn’t until the City launched its Camp Small Zero Waste Initiative in 2016 that an opportunity finally emerged. The Office of Sustainability and Department of Recreation and Parks’ Division of Forestry created a unique city-owned enterprise that processes and sells this endless flow of wood to the public.

American Forests, with support from the Bank of America Charitable Foundation, helped launch this enterprise by providing a portable sawmill and kiln to process the wood. Camp Small has quickly transitioned from being a drain on city budgets to profitability. Room and Board, a modern furniture store headquartered in Minnesota, is even exploring its lumber for their “Urban Wood Project: Baltimore” sustainable furniture line, which currently uses deconstructed building wood thanks to the U.S. Forest Service. One such bookshelf sits proudly in my home.

With the supply chain established, we shifted to creating a local venture that turns Camp Small wood into high-concept products and career pathways for youth. Our first stop was the woodshop at Carver Vocational Tech High School. Greg McDevitt is the sort of grizzled woodworking teacher of 20 years whose envy of the school’s lavish culinary program out his window could become a Wes Anderson movie. But, it doesn’t take long to see the passion and pride for his students’ creations.

When Bryant “Spoon” Smith, CEO of this new venture, and I first proposed the idea of partnering to create a self-sustaining enterprise with his students, McDevitt paused and looked closely at me.

This team will integrate modern designs with art to build a dynamic “Earth Instinct” brand. We’ll work with communities to restore some of Baltimore’s 16,000 vacant lots as meaningful green spaces. We’ll even buy Mr. McDevitt a heavy-duty wood planer for his students, and maybe show that fancy culinary program a thing or two.

In this issue, learn how economic inequity and tree cover in cities are inextricably linked, as well as what American Forests does to create Tree Equity. And, discover what American Forests is doing to bridge the gap between urban forestry job shortages and people who need career opportunities the most through our Career Pathways: Tree Equity initiative. Plus, learn how individuals and organizations create access to nature for everyone and how American Forests’ extensive history has shaped the future of forestry.

Read about our work to incubate an urban wood business in Baltimore.

Urban Forestry Takes on the World. But First, Rhode Island

Discover how the state of Rhode Island is positioning itself as a national leader on how urban forests can help combat climate change.