Home/Project Showcase: A Race for Survival: At the Starting Line

Project Showcase: A Race for Survival: At the Starting Line 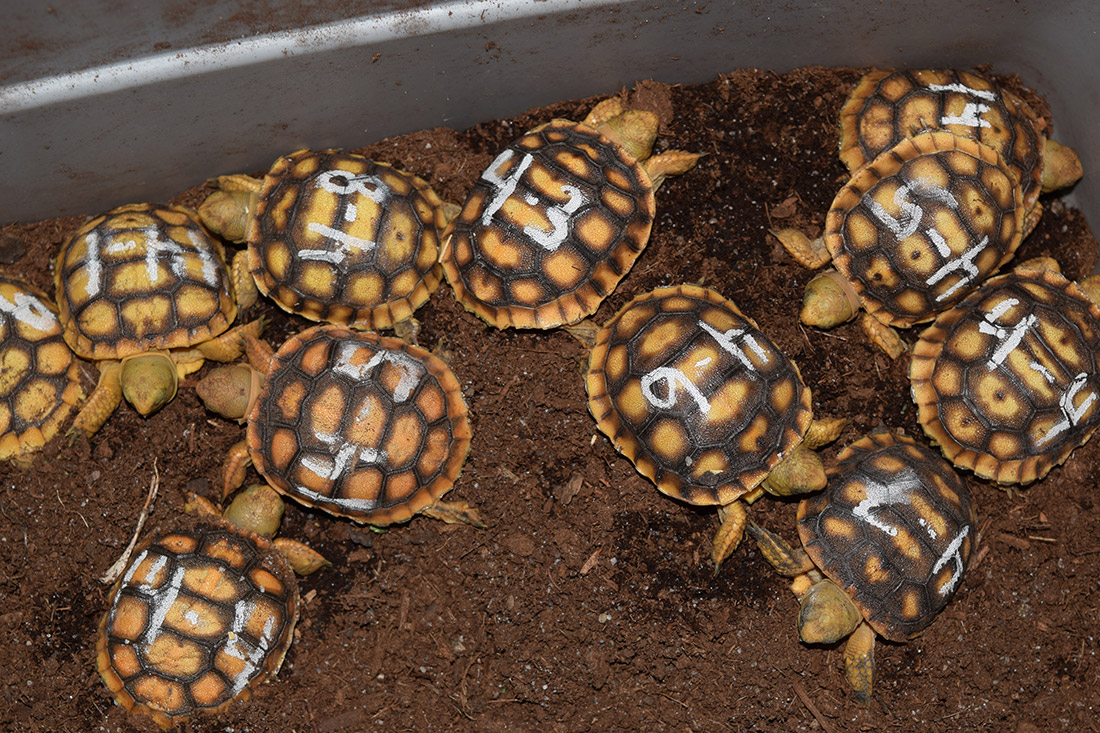 By December 14, 2017, when this photo was taken, several clutches had hatched and were growing rapidly. Credit: Dr. Kurt Buhlmann.

AMERICAN FORESTS IS working with The Longleaf Alliance through the American ReLeaf program to restore the gopher tortoise population and longleaf pine ecosystem across the Southeastern U.S. In September 2017, the Gopher Tortoise Restoration Initiative released 15 gopher tortoises at South Carolina’s Aiken Gopher Tortoise Heritage Preserve. An additional 60 juvenile tortoises, whose eggs were collected from the preserve in summer 2017, and hatched later that fall, will be released in June 2018.

“The gopher tortoise is a very rare species in South Carolina,” says Robert Abernethy, president of The Longleaf Alliance. “With this project, we have the opportunity in just a few years to show that headstarting works and restore viable populations of gopher tortoises to several state and private lands.”

The preserve is a target area because it’s inhabited by the northernmost population of gopher tortoises in the country. The Initiative wants to ensure this population becomes genetically secure by increasing the number of adults — currently estimated to be 160-180 adult tortoises — to 250 individuals.

The eggs were hatched in incubators at a constant humidity and temperature in the University of Georgia’s Ecology Lab at the Savannah River site in Aiken, S.C.

The hatchlings were then raised at the Lab and the Riverbank Zoo, in a converted greenhouse that is climate-controlled to keep the tortoises active throughout the winter. They are fed a diet of zoo food and a collection of vegetables. By June 2018, these tortoises will be the same size as a three- to four-year-old tortoise raised in the wild, which ensures they are able
to protect themselves from predators.

Their habitat, the longleaf pine ecosystem, also needs to be prepared. In the years before the release, longleaf pine forests are thinned with fire to allow low-ground vegetation, such as grasses and wildflowers, to grow, creating an open pine savannah.

At the release site, small, angled holes are dug to resemble burrows. The tortoises are placed at the mouth of the hole, where instinct takes over and they continue to dig. When they leave, their empty burrows provide habitats for other wildlife.

The Initiative has met its goals of collecting eggs, hatching and raising them in captivity. The long-range goals, restoring the gopher tortoise population and the longleaf ecosystem, are still a work in progress — one that American Forests is helping come to fruition.

“Funding from American Forests and the support and enthusiasm for the gopher tortoise and the forest it inhabits from the staff have, quite simply, made this project possible,” Abernethy says, “and that continued support has allowed this project to grow, develop and expand.”

This year, the Initiative will collect eggs from a second property and work on restoring the population there, with releases planned for 2019. They’ll continue to expand to other properties, with suitable habitats and sandy soils, and establish more longleaf pine ecosystems. They hope to gather more eggs to hatch, raise and release in areas without gopher tortoises.

“Restoration of rare, threatened and endangered species ensures not just the survival of the species but our own survival,” Abernethy says. “By managing and conserving forests and trees for gopher tortoises, we also conserve forests that provide lumber for homes and pulp for paper, green space for recreation and clean air and clean water.”