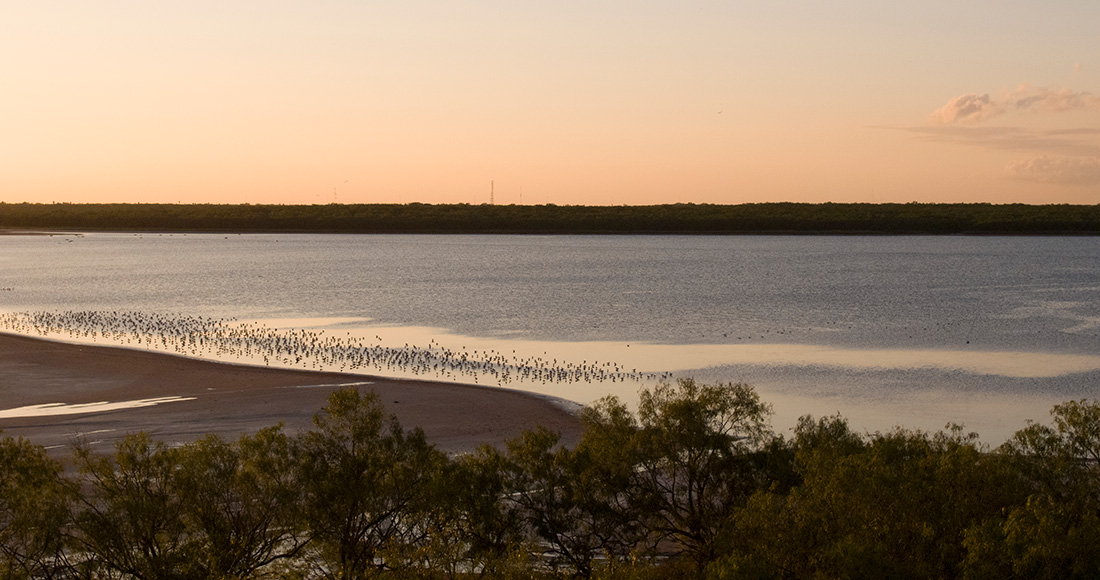 La Sal del Rey sits atop an estimated 4 million tons of salt and is seven times saltier than the ocean. Credit: ©2020 GIVEWITH LLC. ALL RIGHTS RESERVED.

VARIETY MIGHT BE the spice of life. But salt is a close second.

Blindingly white under the South Texas sun, the salt flats of La Sal del Rey have long whetted appetites. Early indigenous groups camped on the lake’s shores, where they likely used the salt to preserve game. They were followed by the Aztecs, and later by Spanish colonizers, who both claimed the lake’s lucrative salt deposits for their king.

The lake’s salt mining days are over. Its surroundings are now known for another rare commodity: native thornforests, also called tamaulipan thornscrub. Thornforests host more than 530 bird species and are the only habitat in the United States for the ocelot, a rare, leopard-spotted cat. These forests once blanketed the Lower Rio Grande Valley, but are now restricted to less than 10% of their former range. As climate change and fast-growing suburban sprawl take their toll, the future of these landscapes hangs in the balance.

In March, as part of a multi-decade push to restore these dwindling forests, American Forests planted 70,000 thornforest seedlings near the southern shore of La Sal del Rey. The planting project, carried out in partnership with the U.S. Fish and Wildlife Service and with support from the Wildlife Conservation Society’s Climate Adaptation Fund, reforested 70 acres of abandoned farmland in the Lower Rio Grande Valley National Wildlife Refuge.

Crews used heavy equipment to clear stubborn invasive grasses, then planted seedlings in plastic “shelter tubes” that can boost plant survival rates by as much as 90%. The tubes help stop hot winds from drying out the seedlings and encourage the young plants to grow tall and put down deep roots.

“It looked almost like a construction site,” said Jon Dale, American Forests’ senior manager for forest restoration in the region. “Except we were rebuilding habitat, not structures.”

This was the first project done in accordance with a new drought resilience strategy developed by American Forests and the U.S. Fish and Wildlife Service, which aims to grow thornforests that can withstand the hotter, drier future forecasted for Texas. As part of this strategy, the La Sal del Rey planting used 31 native tree and shrub species, grown from seeds collected from a variety of individual plant populations across the valley — the more diverse the genetics, the thinking goes, the more likely the overall forest is to thrive.

This planting will also inform the rollout of the newly completed Thornforest Conservation Plan, the first region- wide assessment of strategic thornforest reforestation opportunities. American Forests initiated the development of this plan in 2018, and is currently crafting a business plan with local partners to define the specific objectives and strategies to fund and prioritize additional planting efforts in the Lower Rio Grande Valley.

Diverse plantings, like the one at La Sal del Rey, don’t just restore habitat for ocelots and other wildlife. They also help carry on the region’s millennia-old history of people and plants. A vast array of thornforest species have medicinal and culinary uses, explained ethno- botanist Benito Trevino, an expert in the propagation and uses of the region’s plants. The seed pods of Texas ebony — one of the species planted at La Sal del Rey— can be eaten raw, he said, or grilled for a “really nice toasty flavor.” Roasted and ground up, the pod becomes a coffee substitute.

The region’s ubiquitous mesquite and prickly pear cactus will soon colonize the planting site as well. The prickly pear’s roots are medicinal and its paddles are edible, Trevino said, while its fruit is not only tasty but also a remedy for diabetes. As for mesquite, its sweet pods can be ground into flour, which Trevino’s wife adds to cupcakes and waffles.

It’s only appropriate that so many edible plants will soon grow on the shores of La Sal del Rey. As a good chef knows, any flavor can be boosted with a pinch of salt.

Earthkeepers: A Return to His Initial Passion

Learn about the experience that sparked Brian Kittler’s initial passion for forestry and the road that led him to American Forests.