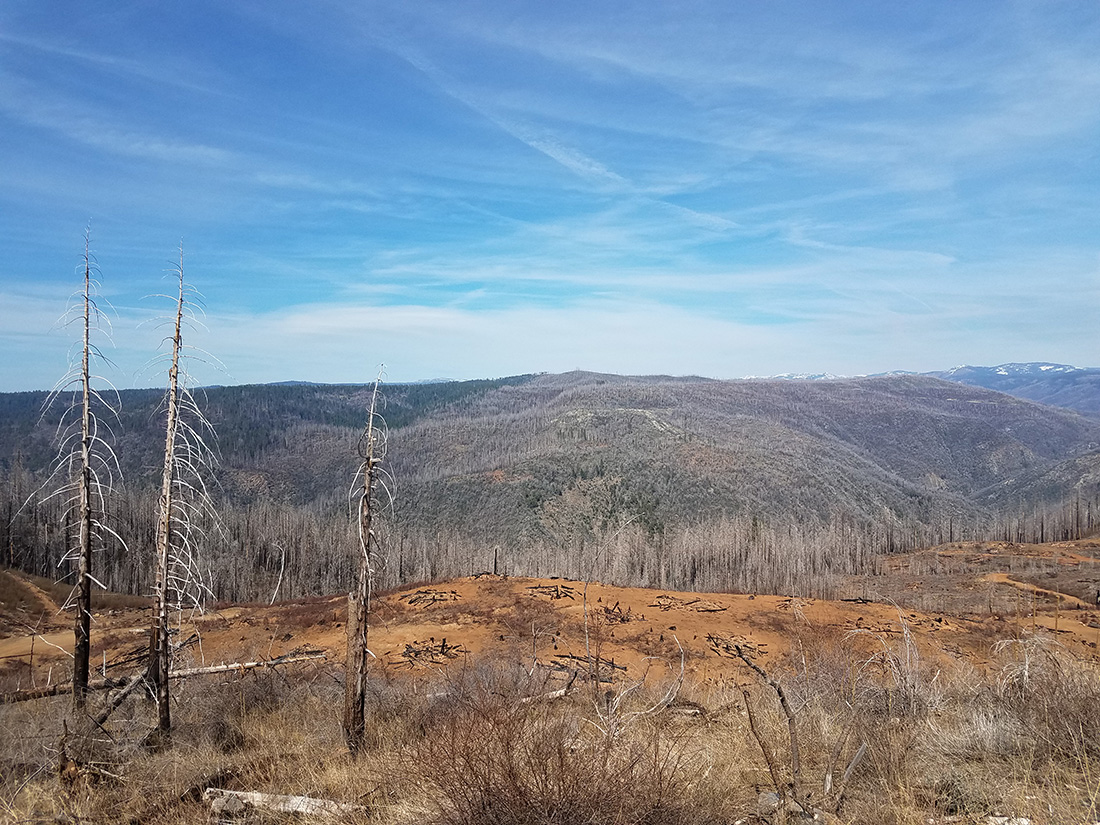 An intense wildfire ripped through this canyon in California, killing all the trees and leaving behind patches of barren land. Credit: Luis Vidal.

THE DISASTROUS KING FIRE ravaged huge tracts of California’s Eldorado National Forest, leaving a landscape of smoldering stumps. The month-long blaze in 2014 incinerated an estimated 100,000 acres, an area as large as Atlanta. That grim toll is a footnote to a decade of devastation in the state: Since 2010, more than 162 million California trees, across 10.5 million acres, have died.

Like many fires in recent years, the King burned hotter and longer due to dry conditions and excess fuel on the ground. It killed all or most of the adult trees in its path. In response, American Forests doubled down on its commitment to California, pledging to work with the U.S. Forest Service (USFS) to restore 10,000 acres of the most severely burned areas in the next 10 years. In 2019, Intel, the multinational technology company headquartered in California’s Silicon Valley, became a partner in this effort, providing capacity-building and financial support to help revive the forest.

“At Intel, we recognize the importance of our impact on the planet, and we saw an opportunity to help reforest a fire scar located near our headquarters,” says Fawn Bergen, global water stewardship manager at Intel. “This partnership with American Forests not only allows us to support reforestation efforts but to also dive into more complex issues around forest health and changing conditions, like climate change.”

Intel’s commitment helped American Forests secure an additional grant from the Bella Vista Foundation, which boosted resources for restoration, including securing a Sierra Corps Fellow to dive into complex climate questions. Brittany Dyer, California state director for American Forests, notes that the resources Intel provided will have a major impact for both the forest’s long-term health and ongoing benefits to Californians.

“Fire scars can serve as a blank canvas,” Dyer says. “They give us an opportunity to ‘paint’ — to get creative and develop climate-smart forests that meet today’s challenges.”

One of the ways to do this is through climate-smart reforestation.

As part of this project, Intel has demonstrated its commitment to long-term forest health by agreeing to provide employee volunteers to help with a technique called “release” — where competing vegetation is removed from the seedling site, promoting seedling success.

“Our work on the fire scar allows us to intentionally create the best forest conditions possible,” Dyer says.

After the King Fire, American Forests set out to restore thousands of damaged acres — and this partnership with Intel is a key part of the equation. The effort is especially critical for the health of the American River, a major source of drinking water for many Californians, because tree root systems prevent landslides, filter rainwater and keep sediment out of sensitive streams.

“One way or another, whether through active management or neglect, we are all creating — or ‘painting’ — the landscapes of tomorrow,” Dyer says. “Working with public and private entities, such as the USFS and Intel, to help create tomorrow’s masterpiece is our responsibility.”