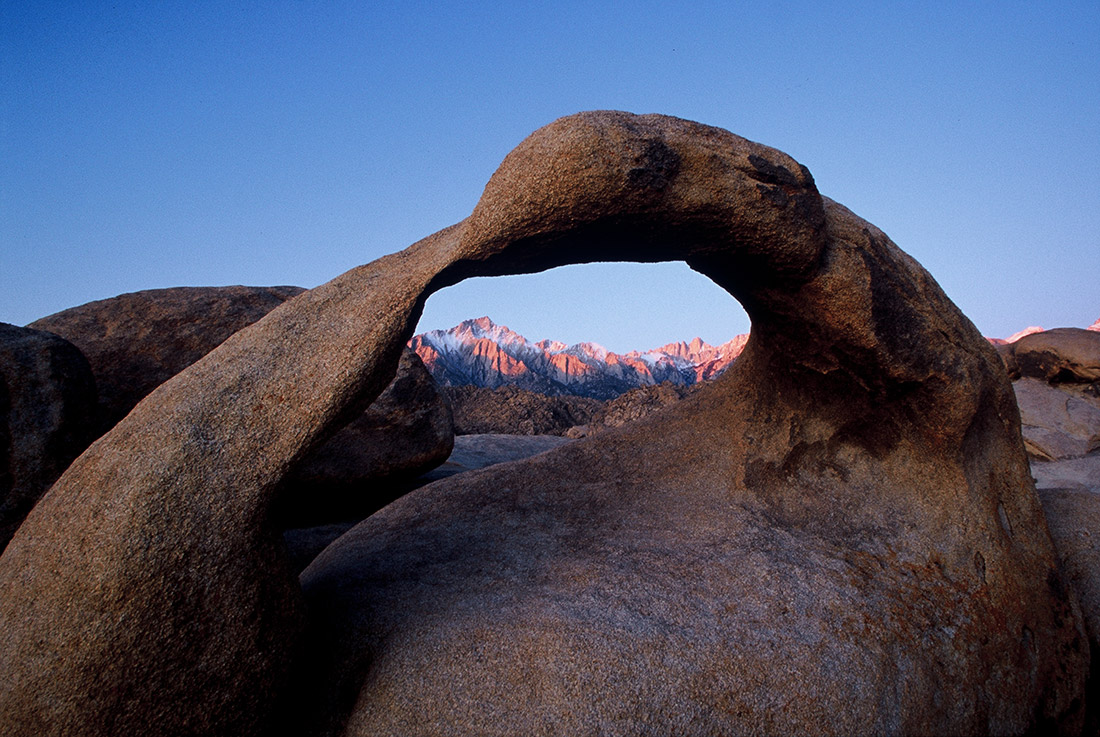 The enchanting Alabama Hills in California are a one-of-a-kind landscape in a state still brimming in natural wonders.

I was getting a stern talking-to. A determined pika was chirping at me while I scrambled up the steep couloir of the Mountaineers Route on Mount Whitney, in the Eastern Sierra Nevada. The tallest peak in the contiguous United States at 14,505 feet, its granite summit is continuously sought after by hikers and climbers from around the world.

Actually, I enjoyed the company. The momentary diversion from the territorial pika took my mind elsewhere while searching for the right footing and handholds to the top of the gully. The morning sun had just crept above the daunting Inyo Mountains to the east, setting ablaze massive granite slabs in alpenglow.

Climber Ryan Rogers scrambles up the steep couloir of the Mountaineers Route on Mount Whitney.

Just one other climber separated me from Iceberg Lake more than 1,700 feet below. And, there remained only 300 feet between me and another summit on Mount Whitney. The last section was steeper than the couloir minus the loose scree, but with many solid handholds and reliable ledges, climbing was bliss.

From the summit hut, hikers and climbers reveled in another great day on the mountain. As I stood overlooking the starkly beautiful Owens Valley, I knew I was only getting started. The high desert landscape has gone through some ecological changes revitalizing the Eastern Sierra and the Owens Valley. As I gazed at it below, it was time to make my descent and trade my trail shoes in for a paddle.

The put-in was a gentle drop-off from a barren, sandy shoal, but as soon as my bow pierced the shimmering, royal blue water, the river came to life. A school of brown trout fanned out beneath me. Several western king birds perched on the impenetrable Tule reeds fortifying the runnel’s banks swayed in the warm breeze. A majestic great blue heron patiently foraged the river’s bounty, standing motionless in the shallows. 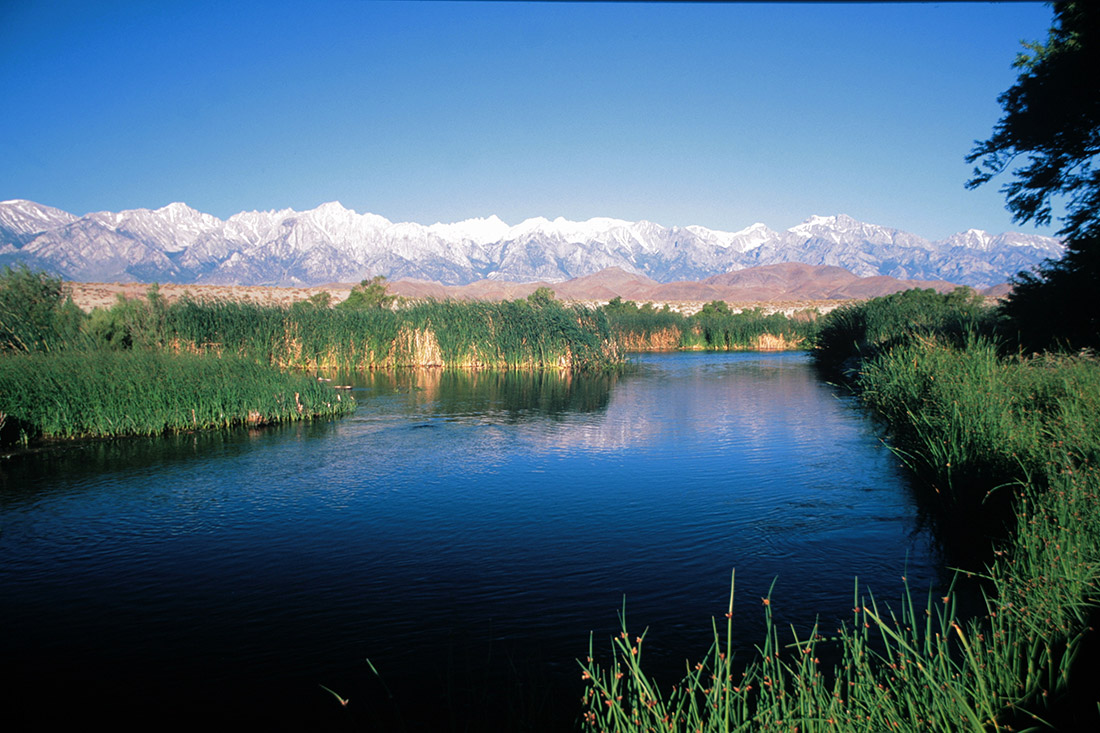 : The revival of the 62-mile Lower Owens River is the largest river restoration project in the history of the American West.

However, this wasn’t an ordinary put-in. As I paddled this liquid lifeline that had been dormant since 1913, I stared at a snow-capped Mount Whitney and the rest of the craggy Eastern Sierra towering to the west, while the desolate Inyo Mountains flanked the runnel to the east.

The revival of the 62-mile Lower Owens River is the largest river restoration project in the history of the American West. It’s been a long time coming for residents of the Eastern Sierra. Just over a century ago, the river vanished from the Owens Valley and was diverted to the Los Angeles Aqueduct, supplying water to the city of Los Angeles. But in December 2006, the Los Angeles Department of Water and Power (LADWP) under court order — redirected snowmelt from the Eastern Sierra into the Lower Owens, breathing life back into the river. Inyo County is hoping the river will eventually support a recreational industry for kayakers, anglers, hikers and bird watchers.

However, river ecologist Mark Hill says it could be another decade before the river is fully restored. But, if the early returns are any indication, the Lower Owens is on a steady track to recovery.

During that time span, Hill, with Ecosystem Sciences Foundation in Idaho, will monitor the river’s vitality, everything from its 3,500 acres of wetlands, increased flows and water quality to its ever-increasing inhabitants such as Tule elk, bobcats and other wildlife.

Hill has worked on several river restoration projects around the globe including the Nile, Mekong and Ganges, and in North America along the Columbia, Snake, Rogue, Yuba and American Rivers. The Lower Owens, however, will be the first restoration Hill has literally started from the ground up.

“This is a young river,” said Hill, as we paddled down from Independence in the Eastern Sierra. “We had to start from scratch, but right now our biggest challenge is changing the river flows.”

Because Tule reeds, bulrushes and cattails are the first vegetation to spring to life out of a born- again river, they’ve thwarted access along the entire section of the runnel. Although Tule reeds act like a natural filtering and cleansing system, the growth of cottonwoods and willows will eventually grow above the dense reeds, creating a shady canopy that will stunt their growth. An increase in river flows would also help thin out the Tules and, in the process, widen the river’s channels.

Even as Hill, his son Zach — a keen paddler and an environmental planner for the Lower Owens — and I eased down a 5-mile section, we did come across many new, robust willow trees hugging the edge of the runnel, the beginnings of that much needed riparian canopy.

“Nature does a tremendous job of planting,” continued Hill, as we navigated some tight, narrow turns in the Tule reeds and made our way toward Owens Lake. “The water has done all the heavy lifting.” 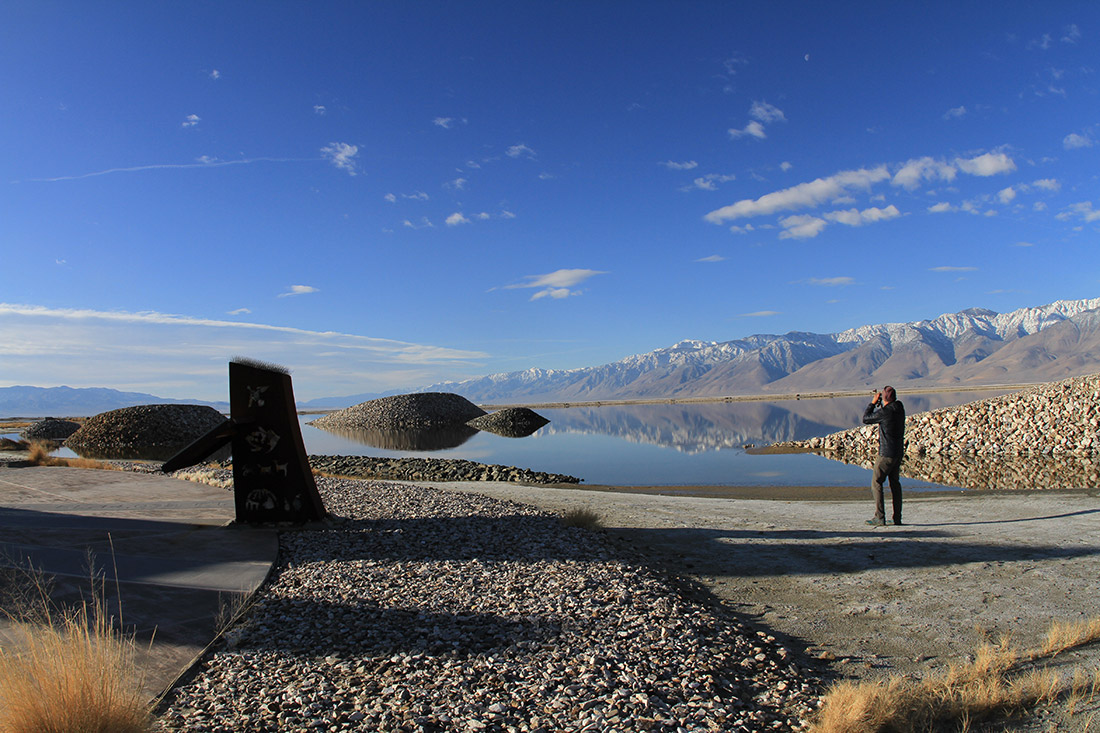 Bird watching is a major draw to Owens Lake.

All was calm on Owens Lake, just south of the Lower Owens River. The many ponds were mirror-like with reflections of the Eastern Sierra and the Inyo Mountains. The air was still, crisp and cool with cumulus nimbus breaking up pale blue sky between mountain ranges.

A northern harrier was all that gratefully disrupted my walk out to the Plover Wing Plaza, part of the aesthetic appeal that came with restoration efforts through the Owens Lake Dust Mitigation Program (OLDMP).

Initiated in 2001 by LADWP, the program has used several techniques to curb dust particles wafting across the Owens Valley. Gravel beds, native flora, wetlands restoration and shallow flooding has reduced potential environmental issues, and when the dust finally settles, the LADWP will have mitigated dust by 99 percent on roughly 50 square miles of Owens Lake.

To enhance visitor’s experience on Owens Lake, the LADWP has also created about 4 miles of easy walking trails and interpretive sites for public access, bird watching being the main draw to the revitalized lake. Three access points lead to various ponds, salt pans and grassland habitats. Just off Highway 395 between Lone Pine and Olancha are Highways 136 and 190 and the access points are named Boulder Creek, Dirty Socks and Plaza.

Most of the trails are raised above the water, offering terrific viewing platforms for spotting migrating waterfowl and 22 species of shorebirds. It’s not uncommon during peak spring and fall migration for 75,000 to 115,000 birds to utilize Owens Lake in a single day. An impressive 270 species of birds have been recorded in the Owens Lake region. Some of the common species include eared grebe, American avocet, western sandpiper, horned lark, side-blotched lizard, California gull and red-necked phalarope.

After paddling the Lower Owens River and basking along Owens Lake, it was time for one last change in vehicle.

HELD UP ON MOVIE ROAD 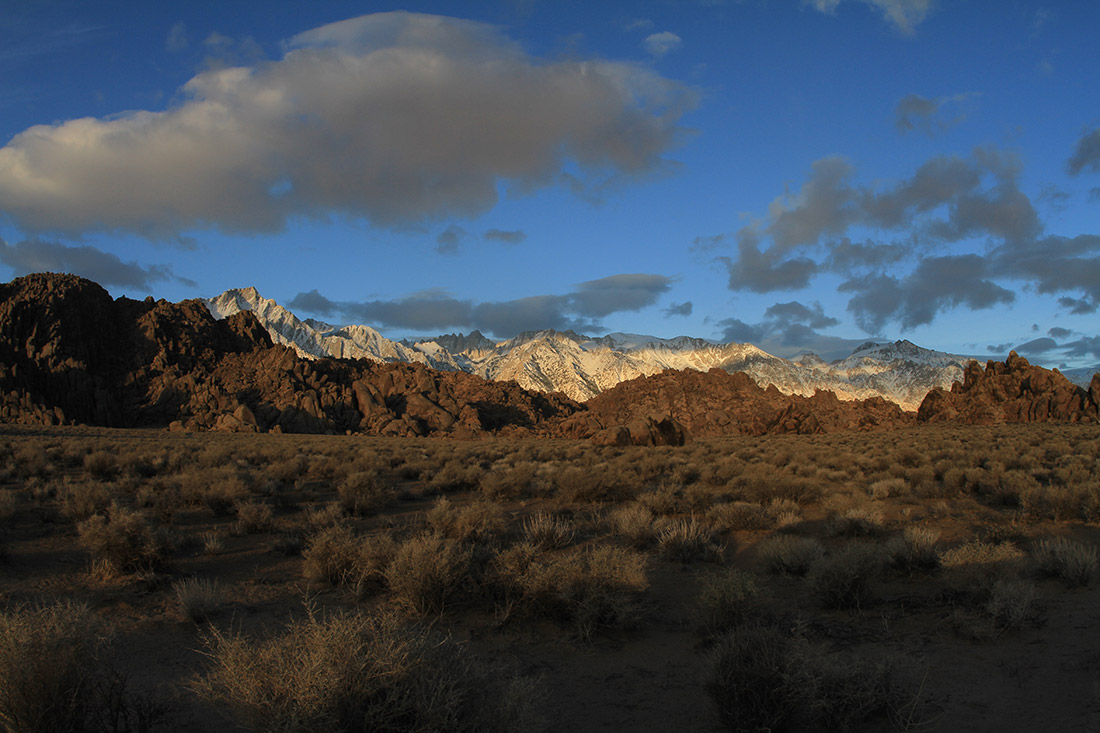 The Alabama hills — and its high desert, low alpine movie set landscape — has played out all those epic scenes during its decades-long Hollywood career.

Furiously pedaling my mountain bike up a dark and steep serpentine-like road, the Eastern Sierra beckoned. All I could hear was my steady breathing, 5,000 feet above sea level. Silhouetted against a multitude of fading stars and the first light of a new day, the tallest mountain peaks in California dominated the wide-open western horizon.

Then on my right, I heard the rush of a stream, Lone Pine Creek was cascading out of the mountains, feeding the expanse of the Owens Valley below. I followed it along, dipping down a gully, then shifting gears, pedaling back up again. A slight chill blew down the Eastern Sierra, a hint of winter still clinging to the granite.

After ascending another deep gully, I found the turn-off to my destination, Movie Road, one of the greatest motion picture backdrops right here in the rugged Alabama Hills of the Eastern Sierra. In the shadow of Mount Whitney, the unique clusters of granite boulders at the base of these snowcapped mountains have provided breathtaking backdrops for a myriad of television series and movies.

Just off Highway 395 and Whitney Portal Road, Movie Road will take movie buffs back to the American Southwest and Old Mexico, but also to faraway places like Khyber Pass in India, and Peru, Argentina and Spain. That’s because the Alabama hills — and its high desert, low alpine movie set landscape — has played out all those epic scenes during its decades-long Hollywood career.

Hopalong Cassidy rode these dusty, gritty hills. The Lone Ranger and Tonto knew every nook and cranny, every hideout in the endless expanse of granite boulders and high desert vegetation. Clint Eastwood fought the ruthless, greedy land baron, played by acting icon Robert Duvall in the western, “Joe Kidd,” in 1972. Mount Whitney and Lone Pine Peak can be seen in the early part of the film.

Other movie legends, such as Tom Mix, John Wayne, Cary Grant and Errol Flynn, all left their stamp on the ruggedly scenic landscape.

However, westerns aren’t the only movies filmed here. William Shatner and Leonard Nimoy came here to film “Star Trek V: The Final Frontier” in 1989, Kevin Bacon for “Tremors” in 1990, Brad Pitt for “Kalifornia” in 1993, and Demi Moore for “G.I. Jane” in 1997. In 2000, a wounded Russell Crowe galloped across the Alabama Hills in his Academy Award-winning performance as Maximus, the Roman general, in “Gladiator” with Mount Whitney in the background. And, in 2012, “Django Unchained” was released starring Jamie Foxx, Christopher Watlz, Kerry Washington and Leonardo DiCaprio, where Foxx and Waltz discuss a business arrangement by the glow of a campfire in the Alabama Hills.

Why would all these stars leave their Hollywood sets and travel five hours north to Lone Pine? It’s because of these enchanting Alabama Hills, a one-of-a-kind landscape in a state still brimming in natural wonders.

Managed by the Bureau of Land Management, this geological wonder was formed by chemical weathering over the millennium when the climate was much wetter and streams of water percolated down cracks and fissures in the granite and separated the bedrock into massive clusters, ledges and rock arches — perfect locations for shooting films.

Each October since 1990, the Lone Pine Western Film Festival is held and includes movie set tours through the Alabama Hills. Stop by the visitor’s center in Lone Pine to pick up a map of Movie Road. Inside the map are photos and clips of some of the old westerns filmed here. An easy self-driving tour will take movie buffs back in time to their favorite western flicks.

However, there’s nothing better than wandering off on your own into the Alabama Hills before sunrise, scrambling up to the apex of one of those granite clusters, and stumbling across a granite archway, watching pink and purple hues sweeping across the high peaks of the Eastern Sierra, a backdrop that may work for any movie in the making.

Chuck Graham is a freelance writer and photographer living in Carpinteria, Calif. His work has appeared in National Geographic for Kids, Backpacker, Natural History, BBC Wildlife and Canoe & Kayak Magazine. To see more of his work, visit www.chuckgrahamphoto.com.

Explore the majesty of some iconic California recreation destinations, from the summit of Mount Whitney to the movie set landscape of the Alabama Hills.