As the natural gas industry finds more and more resources in our nation’s forests, difficult choices between economy and environment must be made.
By Darrin Youker

This gas well is one of several new industrial complexes in Tioga State Forest. Credit: WWW.PAFORESTCOALITION.ORG

Roy Siefert pilots his Chevrolet Blazer over the snow-caked roads of the Tioga State Forest. It’s midwinter, and a blanket of snow and cold hangs over this wooded tract in northern Pennsylvania. But in the midst of the maples, ash, and pines is a hub of activity.

Siefert, District Forester for the 165,000-acre Tioga Forest, is checking on a network of pipelines, compressor stations, and gas wells that has transformed a portion of the woodlot into an industrial site. “This is just like a little city,” he says.

Exploration of the Marcellus Shale Formation, the nation’s largest reserve of natural gas, is transforming the landscape of Pennsylvania. And the venerable Penn’s Woods are not immune to development.

So far, 700,000 acres of state forest land are under lease to natural gas companies. Estimates suggest that as many as 12,000 wells will be drilled on state forests over the next 20 years.

The Marcellus Shale Formation runs underneath most of the Keystone State, and so far energy companies have concentrated their activities mostly in the state’s northern tier. Industry experts predict that drilling will last for more than 50 years. And along with development on private lands, state-owned property is already seeing its fair share of drilling.

Tioga State Forest has 45,000 acres under lease for gas development, the highest concentration of gas drilling among state forests—so far. For example, in a tract of the Tioga near the college town of Mansfield, the industrial development takes up 185 acres of land. All of this development has brought with it an industrial infrastructure for long-term gas development. There is little question that the state forest system, like much of Pennsylvania, is at a crossroads.

“Some changes will be permanent and some will be negative,” says John Quigley, the former Secretary of the Pennsylvania Department of Conservation and Natural Resources (DCNR). “How will we strike a balance? Can we preserve the public lands?”

In 2008 Pennsylvania used leases of state forest lands to close a budget gap. Those leases represent the majority of gas exploration currently underway. And it has fundamentally changed how Tioga’s staffers are working, Siefert says. About half of his job duties are now related to Marcellus shale. “It’s really a big juggling job,” he says.

Most of the development in the Tioga woods is occurring on land that was once a strip mine. That factor has allowed the forest agency to minimize the need to take away virgin forest in favor of gas infrastructure. However, there is a decidedly industrial feel to the gas lands. Two drilling rigs tower over the woods, and tanker trucks hauling water to drill sites run at a constant pace over the dirt roads.

Even after the rigs are gone, 10-foot-high well heads will remain, along with looming storage towers. A compressor station, housing eight 4,000-horsepower engines, hums constantly. “This is an industrial facility,” Siefert says.

Over the next year, gas exploration will enter a second phase in another portion of the Tioga Forest. This new exploration will occur south of the Pennsylvania Grand Canyon, an 800-foot-deep canyon cut by glaciers during an ice age. The area, the most heavily used portion of the forest, is rich in recreation opportunities. Roads there are groomed for snowmobiling, and there are endless cross-country ski opportunities. The 62- mile-long Pine Creek Rail Trail, a popular hiking and mountain-bike destination, cuts through some of the most scenic portions of the woods.

“It’s our highest recreation use area and one of our most scenic viewsheds,” Siefert remarks.

In the heart of the woods, gas companies are clearing a roadway to access well sites that will be drilled in coming years. Though not visible from any highways, the drill sites and roads will become part of the scenery that hikers and snowmobilers see while venturing deep into the woods.

“I would not want to see this kind of development spread across our forest system,” Siefert says.

Another view comes from Kerry Gyekis, a forester and member of the county planning commission. “Tioga County has a rich history of forest and timber management,” he says, adding that much of northern Pennsylvania is in transition as gas exploration transforms the region.

Even after drilling is complete, equipment like the compressor station remains. Credit: Darrin Youker

Gyekis has worked with forest landowners to try to manage both gas exploration and smart timber usage, but the balance is often difficult. He explains that any time a forest is cut through by development, habitat fragmentation will follow.

“Whenever you bisect a property and build roads through it, you limit what can move through the forest,” he says. “Some companies are doing a good job, but I’ve gone to places where the sites are not well maintained.”

Over time, more than 6,000 wells will be drilled in Tioga County alone. The health of the forest will depend greatly on how the gas companies treat the resource.

“Undoubtedly, some forest will remain, but their consideration is often not about the forests,” says Gyekis. “It is much bigger than anything this area has ever seen.”

Seneca Resources Corp., a subsidiary of National Fuel Gas Co., is one of the companies drilling in state forests. Seneca has worked with state foresters to improve well pad designs to minimize impacts on the environment, says Nancy Taylor, a company spokeswoman. By combining drilling locations and taking advantage of drilling techniques, the company has been able to reduce the number of well pads by one-third.

By using existing road systems and running waterlines instead of trucks, the company says it is reducing wear and tear on the forest. Taylor adds that Seneca tries to locate gas infrastructure out of lines of sight, and takes suggestions from DCNR staff into consideration. “It’s not just hype,” Taylor said. “These are our forests too, and we do everything we can to be good stewards and work with the foresters, regulators, and public to best meet everyone’s needs.”

There is more at stake than just forest stewardship, says Quigley. More leasing of state forests could cause Pennsylvania to lose its accreditation by the Sustainable Forestry Initiative, which could deal a significant blow to the state’s forest industry.

“It has obvious benefits from an economic standpoint,” Quigley says. “But it is of critical importance to our environmental legacy.”

Sustainable certification helps move wood products, even when there is a slow timber market. But Pennsylvania also benefits by having the Sustainable Forestry Initiative give its blessing on how the forest is managed.

“I’d hate to see us lose certification,” says Siefert. “Its value overshadows what we might gain from short-term leasing.”

DCNR, which oversees the state’s forests and park system, has instituted a series of monitoring programs to measure impacts on public lands. And in the existing leases, DCNR has oversight on where gas infrastructures are located. The department also added 27 staff members to help monitor gas activity. Still, the department is spending $3 million a month in response to the Marcellus shale drilling.

“Our geologists have long known about the Marcellus Formation,” says Quigley. “What has caught us by surprise is how quickly the industry moved into Pennsylvania. Clearly, it is consuming more and more of the agency.”

DCNR scientists recently finished a study that looked at current gas leases, sensitive areas within the forest system, and nearby gas activity. Their conclusion was that any further leasing of state forests would jeopardize the long-term health of the woodlands and cause habitat fragmentation.

“Based on the impacts to the environment and to recreation opportunities, we cannot do anymore wholesale leasing of virgin ground,” Quigley says.

However, Pennsylvania’s new governor, Republican Tom Corbett, has said he wants to overturn the moratorium. According to Jan Jarrett, president of environmental advocacy group PennFuture, a coalition of state environmental and conservation organizations has asked the Corbett administration to keep the moratorium intact. Jarret says that no more state forest land should be leased to help Pennsylvania balance its budget. Instead, the state should enact a tax on gas extraction.

“Unfortunately, the budget pressures are even worse this year. We’d hate to see that one-time spurt of revenue fundamentally compromise the quality of our forest resources.”

Darrin Youker is an environmental reporter who lives in Reading, Pennsylvania. 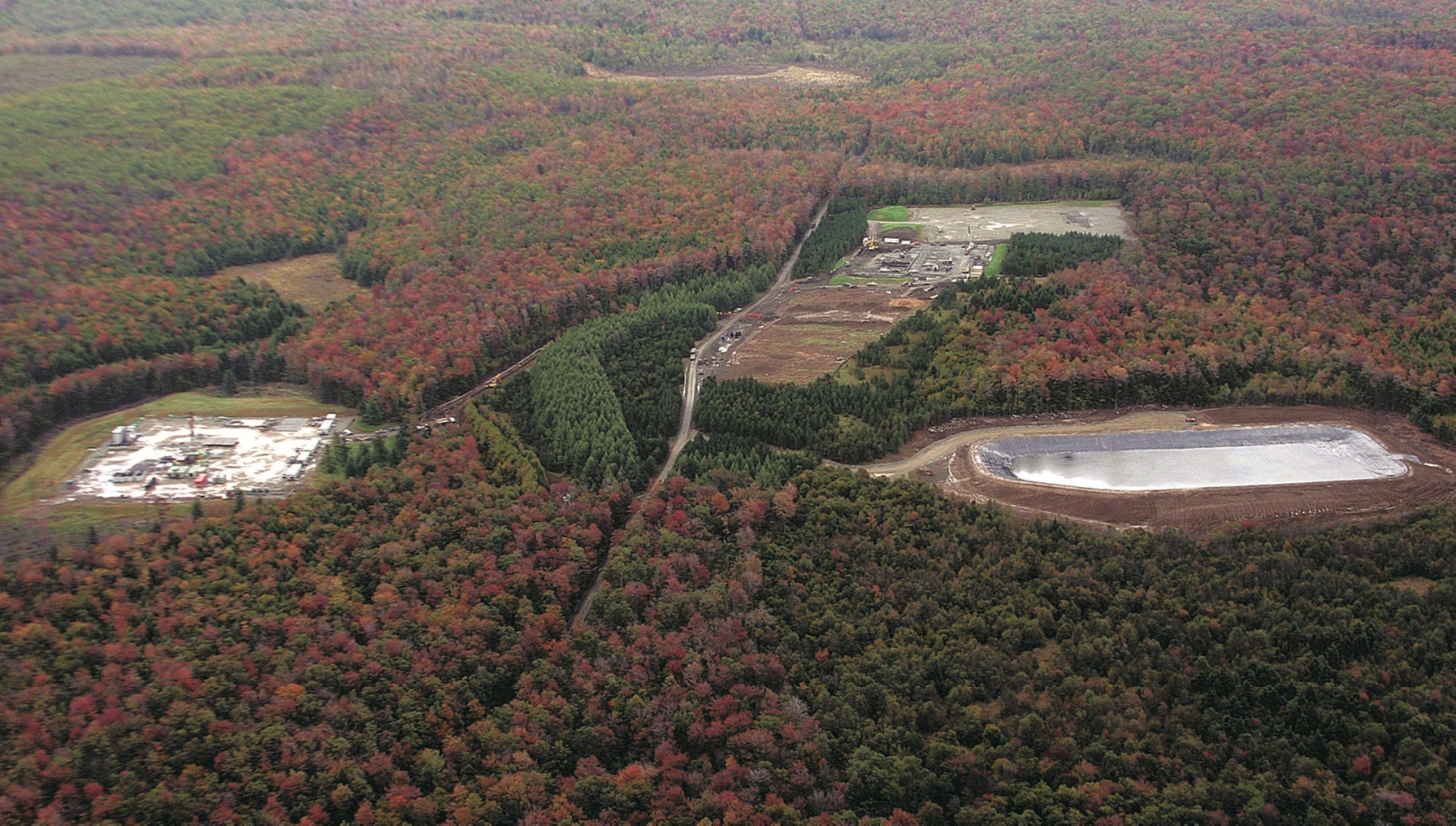 The Marcellus Shale formation that has grabbed the attention of both the natural gas industry and concerned environmentalists spans much of the Appalachian Basin, reaching as far north as New York and as far south as Tennessee. Each state containing part of the formation takes a slightly different approach to managing this natural resource and the effects that its extraction can have on the environment and human health.

The most widely used method of natural gas extraction is called hydraulic fracturing, which uses tons of water laced with chemicals to blast through the shale formations and reach the gas inside. The impact of this method can vary according to each location’s unique ecosystem. In late March, the Maryland House of Delegates passed a measure to limit the drilling of natural gas in that state until further studies could be conducted to find exactly how the drilling methods would affect the environment. All drilling in Maryland’s portion of the Marcellus Shale formation will be delayed until August of 2013, when the study should be completed. The bill does allow for drilling permits to be issued before that time, but only if the applicants can prove that the work will be done without harm to the environment or human health.

Opponents of the bill argue that drilling in western Maryland could provide much needed economic stimulus, and help the state recover from the recent recession. That the bill was passed despite the economic potential is proof of how seriously some states are beginning to take the effects of natural gas drilling. Other states and forests with a stake in the Marcellus Shale formation will be paying close attention to the effects of Maryland’s bill, which could soon be one of many across the formation, as well as the progress of their study, which could yield answers to the questions that many have about the true consequences of hydraulic fracturing.