By Christopher and Barbara Johnson

Photographs shot by satellites high above the earth show something very distinctive in the Upper Midwest — a clearly outlined, deep-green rectangle. They’re images of Menominee Forest, the centerpiece of the 235,000-acre Menominee Reservation in northeastern Wisconsin and one of the most historically significant working forests in the world. NASA astronauts have also reported seeing the forest from their perches in the space shuttle.

For more than 150 years, the Menominee have pioneered forestry practices that have preserved an ecosystem with numerous species and varied habitats. The result is a forest that is not only economically profitable, but also ecologically healthy. 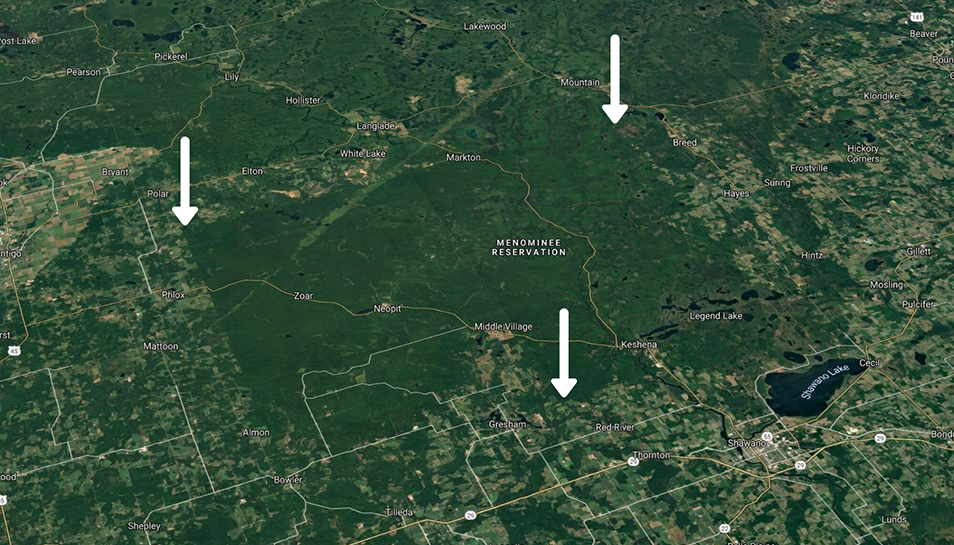 The Menominee practice a sustained-yield approach to forestry; that is, they manage the forest to ensure that trees are harvested in amounts that will ensure a steady supply of timber far into the future. The Menominee approach is unique, blending modern forestry science with traditional beliefs embedded deep in their culture. “To us, sustained yield means managing the forest for a long time,” says Marshall Pecore, forest manager for Menominee Tribal Enterprises, the corporation that operates the tribe’s many businesses.

The Menominee people’s emphasis on sustainability evolved from their cultural relationship with their land. They began to harvest timber in the mid 1800s, when, according to the tribe’s oral tradition, a chief counseled them to “start harvesting the trees with the rising sun and work toward the setting sun, but to take only the mature trees, the sick trees and the trees that have fallen. When you reach the end of the reservation, turn and cut from the setting sun to the rising sun and the trees will last forever.”

Over the years, the Menominee also have taken a continuous forest inventory, dividing the forest into plots of a fifth of an acre each to measure changes. “All the trees are numbered,” Pecore explains. “We take diameters and heights. In the last inventory, there were 58,000 trees.” Measuring the trees every 10 to 15 years has aided the foresters in maintaining diversity, quality and quantity.

The Menominee view themselves as the forest’s stewards, never taking more resources than are produced within natural cycles so that the forest’s biodiversity can be sustained. They also believe that rewards can’t be measured in financial terms alone, but in environmental, cultural and spiritual values. As a result, the forest managers allow some trees to reach full maturity before being harvested, while permitting others to age indefinitely to protect thriving stands of oldgrowth white pine and sugar maple. Using this principle, the Menominee have harvested a half billion board feet of lumber since the mid 1800s — yet, today, they have more standing timber than 150 years ago.

Throughout history, the Menominee have had to battle the federal government to keep control of their forest. Soon after they fought and won the right to their own reservation in 1854, the Menominee purchased a small sawmill to cut and process lumber. “Most people think that it must have been unfathomable to the traditional Menominees to cut the trees,” Pecore explains, “but they saw that they could do something to survive. They switched over to logging easily because they had been managing the forest all along.”

During the late 1800s and early 1900s, the Menominee had to battle the policies of various governmental agencies to manage the forests their way and to achieve greater self-sufficiency. In 1905, according to Pecore, “There was a big blowdown of hardwoods, of sugar maples. The Menominee wanted to build a new sawmill and cut the salvage logs.” They faced resistance in Congress, but Wisconsin Senator “Fighting Bob” LaFollette helped enact a 1908 law that allowed them to build the mill.

From the 1950s into the 1970s, the Menominee people faced further threats when the federal government terminated the reservation as a way to promote assimilation of the tribe into the mainstream culture. The reservation became a county, and to raise funds for infrastructure, the tribe was forced to sell parts of their ancestral lands to developers. During this period, the Menominee felt that they were losing their culture and vigorously protested the policy. In 1973, Congress ended the disastrous experiment with the passage of the Menominee Restoration Act, which restored Menominee lands to reservation status. 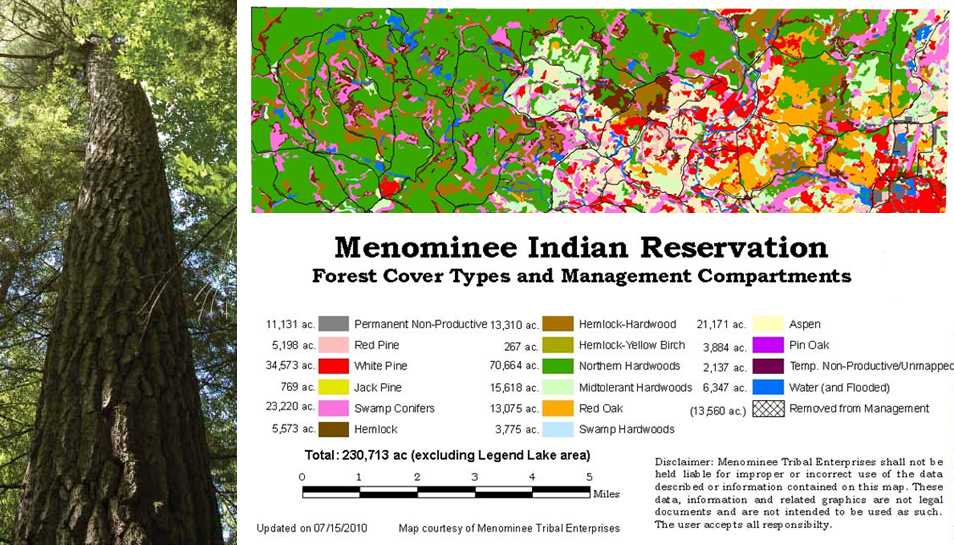 Since the restoration of the reservation, the Menominee have continued to apply their approach to sustainability. Pecore explains, “You’ve got to have these different ecological types meshing and working together. We maintain stands of hemlock, which is not desirable in the marketplace, but is an important part of the ecology. If we keep a lot of diversity — species diversity, vegetation diversity — then we’ll have a healthy ecological forest.”

Approximately 30 species of trees now populate the forest, including white pines, hemlocks, Canadian yews, sugar maples, aspens, oaks and hickories. Some white pine stands are more than two centuries old, and the hemlocks are even older. The forest is equally rich in wildlife, such as bears, otters and cormorants. More than 300 miles of streams teem with trout.

For their approach to forestry, the Menominee have received numerous awards, including a Presidential Award from the Council on Sustainable Development and a Smart Wood Certification Award from the Rainforest Alliance. In 1995, the United Nations recognized the Menominee and other indigenous groups for balancing land use with sustainable practices to preserve forests for future generations.

Today, Menominee Forest has incredible stands of old-growth trees. In the northern part of the forest, no trails exist, so one has to wade through ferns and other undergrowth to reach ancient white pines at least 15 feet in circumference and soaring 200 feet into the sky. Thanks to the Menominee nation’s wisdom and foresight, one can walk into the past and stand in awe of the majesty of those trees.

The article was published in the Spring 2012 edition of American Forests Magazine. American Forests has been publishing its magazine since 1895. Filled with beautiful photographs and informative articles highlighting our nation’s forests and trees, American Forests features information for everyone from the environmentally conscious to the outdoor enthusiast. Become a supporter and receive our magazine in the mail. 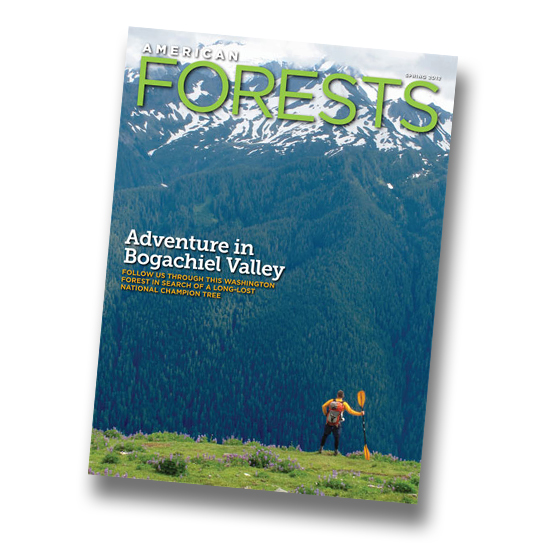 The profound impact forests had on one of America’s greatest authors and his writing.

Venerable Trees of the Bluegrass

If trees could talk...a region's history as told by its ancient trees.