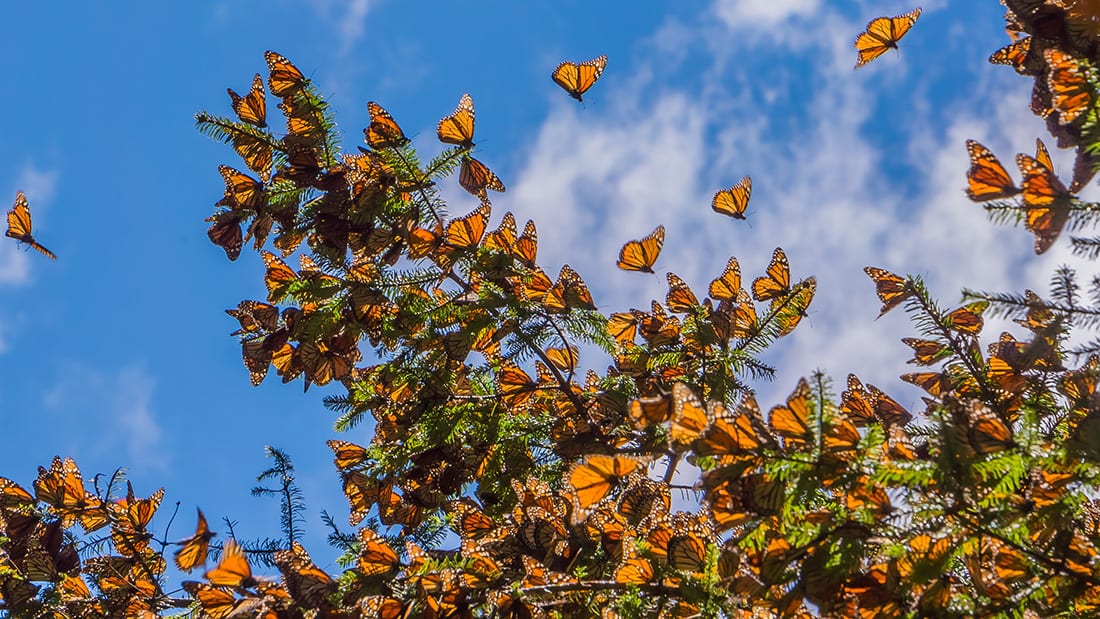 Millions of monarchs overwinter in the high-elevation forests of Michoacán, Mexico, where they cluster in oyamel firs for warmth and protection. Credit: Gami Photo Agency / Shutterstock.

EVERY YEAR, millions of monarchs overwinter in the high-elevation forests of Michoacán, Mexico, where they cluster in oyamel firs for warmth and protection. Here, a Goldilocks combination of temperature and humidity keeps the butterflies healthy until spring.

But for decades, legal and illegal loggers have been felling the monarchs’ winter home. In 2006, American Forests teamed up with local partners to restore Michoacán’s forests. Since then, American Forests has planted 1 million trees for the monarchs, including, in 2020, 72,000 more oyamel firs at higher elevation to help the region adapt to a changing climate.

This is just one of the big successes from American ReLeaf, American Forests’ program to restore large forested landscapes. Initially called Global ReLeaf, the program planted its very first tree in 1990: a jack pine in Au Sable, Mich., which became part of a decades-long effort to restore habitat for the rare Kirtland’s warbler. Since then, American ReLeaf has partnered to plant 8.6 million jack pines in Michigan, Wisconsin and Ontario — so many, in fact, that the Kirtland’s warbler was removed from the U.S. endangered species list in late 2019.

In the last three decades, American ReLeaf has worked with partners to plant 65 million trees in landscapes ranging from tropical forests on Hawaii’s Big Island to New Jersey’s pinelands and the glacier-capped mountains of the West. The program has helped to advance forest conservation policy and develop cutting-edge forestry methods to prepare forests for an uncertain future.

“We’re extremely proud of our accomplishments over the last 30 years,” says Eric Sprague, American Forests’ vice president of forest restoration. “We’re also looking to the future. Going forward, we want to make sure that our projects are resilient to climate change, so that the trees we plant are able to adapt.”

Monarchs, which can migrate 3,000 miles without any help, are tougher than they look. But even the toughest of butterflies need a forest to call home. As the climate crisis intensifies, a safe haven is more important than ever.

American Forests is excited to welcome Brittany Dyer as our California State Director!