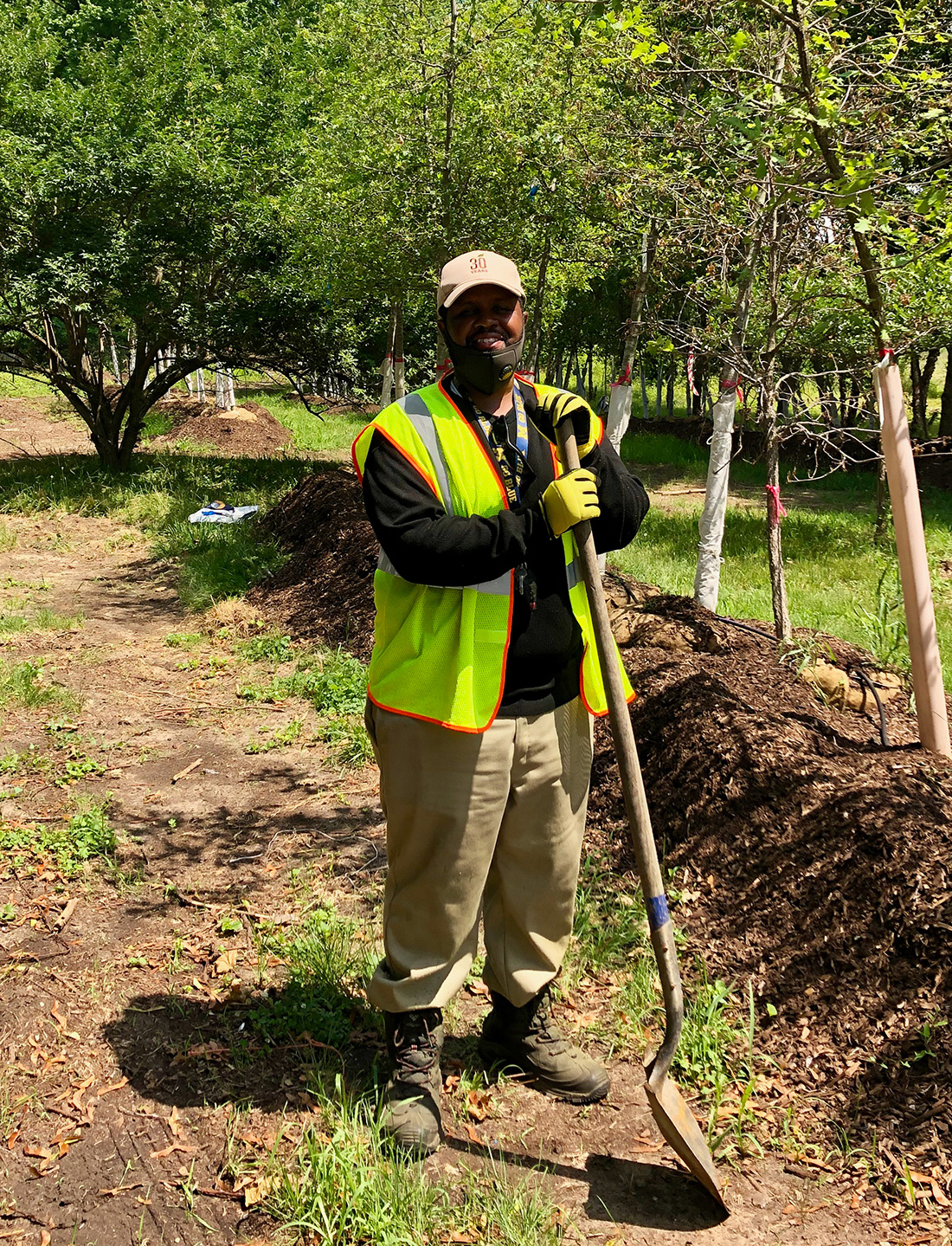 On its face, the California Conservation Corps’ motto might seem like more of a warning than a recruiting tool, but for thousands, it represents a promise: new skills, entry to a career, even a bit of an adventure.

And it fairly describes the work of roughly 3,400 young people the state agency trains each year for jobs in forestry and other conservation fields.

Planting tree seedlings on steep hillsides on hot summer days and thinning forests of dense vegetation so trees already planted there have room to grow is hard work.

Growing and taking care of trees in cities is also hard. Digging large holes for hardy trees that can withstand relatively harsh city environments and climbing trees to prune branches so they won’t fall on cars and houses can be exhausting.

Yet it’s the kind of work we desperately need more people to do as interest in trees as a solution to climate change and social inequity takes off across America.

And, despite how arduous this work is, the opportunity couldn’t come at a better time. As of August, 1 in 10 Americans was unemployed. People from under-resourced communities in cities and rural areas — two places that have the highest potential for forestry jobs — are among the hardest hit by the recession.

The World Economic Forum-led global movement — called 1t.org — to conserve, restore and grow 1 trillion trees by 2030 is one significant opportunity to create forestry jobs. Twenty-eight United States-based corporations, governments and nonprofits joined the movement this summer by pledging nearly 850 million trees. American Forests and the World Economic Forum, who lead the U.S. Chapter of 1t.org, are helping to bring their pledges to life. 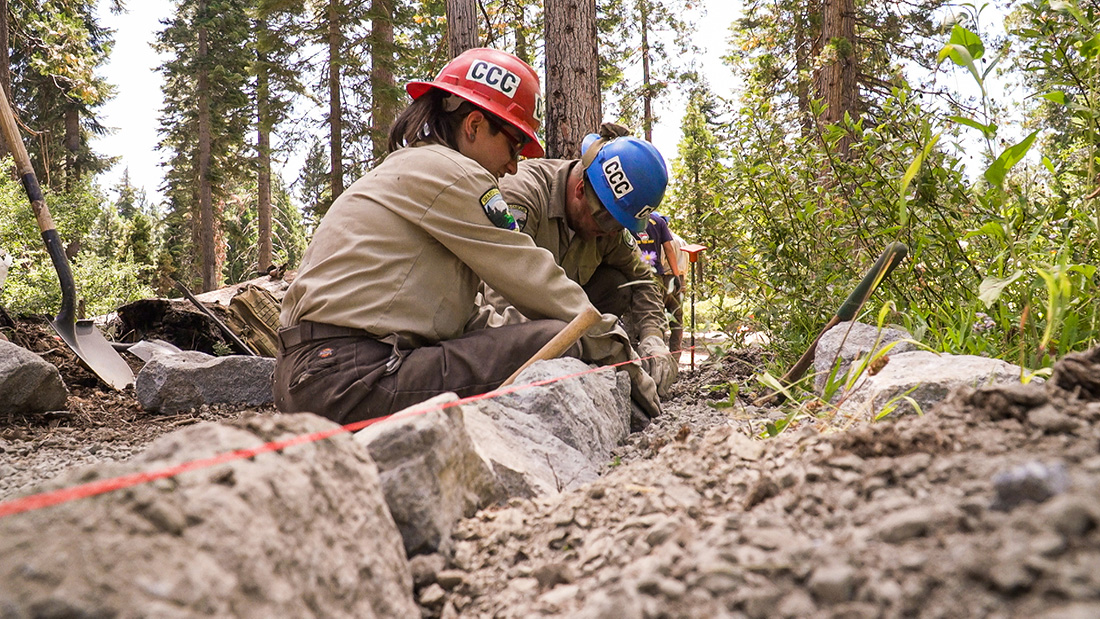 The opportunity to put large numbers of people to work also stems from another critical and related need: national forests in the U.S. have been devastated by climate change-induced wildfires, droughts, pests and diseases. There’s already a 7.7-million-acre-backlog of land that needs to be brought back to life. In many places, addressing this need will require a combination of such things as planting trees and thinning dense forests to increase their resilience and diversity and allow new trees to thrive. The backlog is especially dire following reductions in the overall federal forestry workforce and a radical shift in the work being done. An increasing share of federal forestry workers, especially in the western U.S., are fighting wildfires rather than taking care of existing trees and thinning the forests to remove fire fuels.

The need to achieve Tree Equity in cities also creates a chance to put to work people from urban areas hardest hit by unemployment so they can plant and take care of trees in places that need them the most. Tree Equity is about every city neighborhood having enough trees so that every person benefits from them. In most cities, trees are sparse in low-income neighborhoods and some neighborhoods of color.

The Nature Conservancy has identified more than 20 million acres of U.S. public land — a combination of federal, state, tribal and local land, as well as land in cities — that present opportunities for reforestation. Reforesting at that scale could require planting as many as 6 billion trees, a scope of work that would create or support 582,000 jobs, from entry-level tree planters to forest workers and conservation scientists. The price tag: about $14.66 billion.

“We have an enormous need to restore our forests and plant billions more trees in America,” says Jad Daley, president and CEO of American Forests. “Given the recession, this is a great opportunity to put legions of people to work in cities and rural areas. We need a mass mobilization. Doing so will require resources, as well as innovative thinking about how to make jobs in the forestry sector alluring and available to everyone.”

Under any plan to reforest millions of acres in the U.S., entry-level tree planting jobs will be the most plentiful. But filling these types of jobs is challenging. Not only is the work physically demanding, with workers in large forests often planting several hundred trees a day, the pay is low. Last year, the average hourly wage of a forest or conservation worker in the U.S. was $15.76, and hourly rates for tree planters are the lowest in the forestry sector.

What’s more, the jobs are seasonal and only last a few months. Most people who plant trees in the U.S. are guest workers. A lot of other forestry work is seasonal, too, including fighting wildfires, growing trees in nurseries and using prescribed burns to manage forests. That can make it difficult to lure people into the field and keep them there.

To attract more workers — and make a lasting impact on people’s lives and the economy — we need to build an army of stable, long-term jobs with potential for upward mobility. 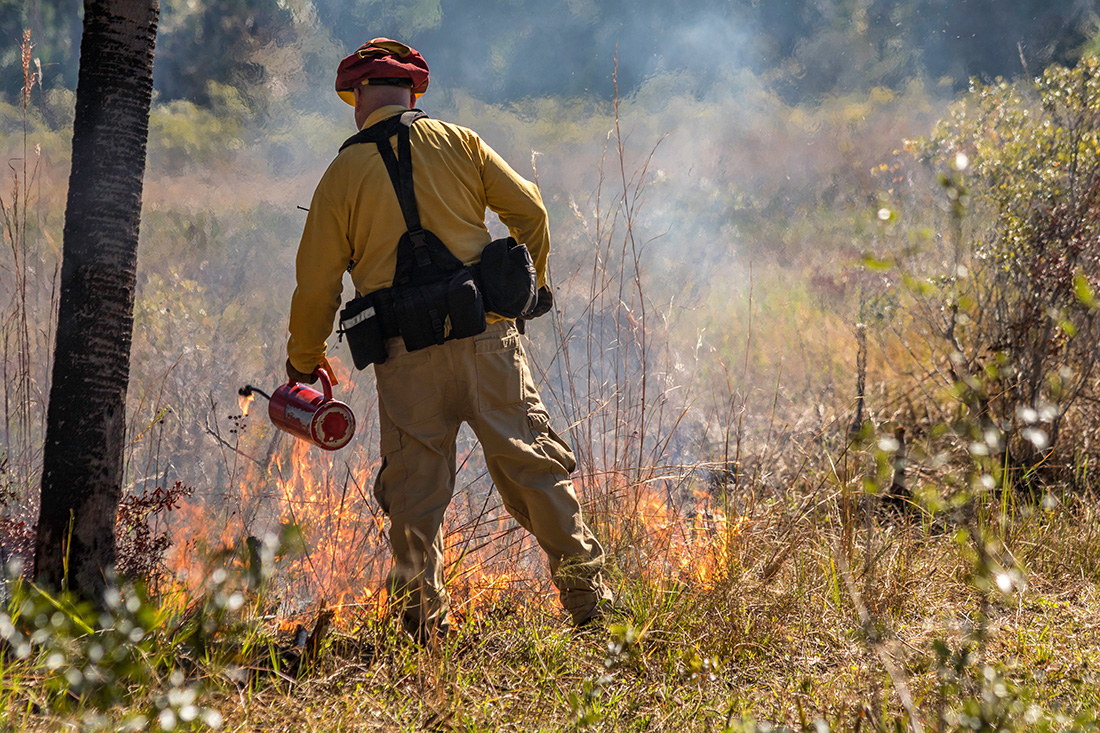 A lot of forestry work is seasonal, including fighting wildfires, growing trees in nurseries and using prescribed burns to manage forests, as is seen here. Credit: Robert Wilder Jr / Shutterstock.com.

One way to build a stable workforce is to cobble together seasonal jobs to create positions that are more stable and last for longer periods of time, says Zander Evans, executive director of the Forest Stewards Guild, a Santa Fe-based professional organization of foresters and other land stewards that also runs training programs. Nursery and planting work could be combined, as could wildfire fighting and work to clear fire- prone underbrush. This would mean training people in several skill sets.

“We all know that planting trees for 8 to 10 hours a day is hard work,” Evans says. “But I think if we could pay a living wage to both grow the trees and then get the trees in the ground in the right way, that could help.”

But a fragmented forestry sector makes designing those positions complicated. People in forestry jobs, including tree planters and other seasonal workers, are employed by a slew of public agencies at every level, as well as private industry. Mobilizing a massive army of more robust and stable positions — with paths for upward mobility — would require agencies across government and private employers to work together.

“Building this sort of capacity is really about stitching together, through relationships, the workforce that we’ll need,” says Brian Kittler, senior director of forest restoration at American Forests.

Recognizing this need, leaders from various forest sectors in recent years have begun creating strategies and policies intended to better leverage the skilled forestry staff in state and federal agencies with added capacity from non-governmental organizations and forestry contractors.

This is an important component of “shared stewardship,” a relatively new concept designed to make it easier for governments, nonprofit organizations, tribes and private companies to work together and pool their resources in projects that cross forest ownership boundaries. In this vein, the workforce trained and coordinated by the Forest Stewards Guild provides vital labor for tree planting, prescribed fire, restoration thinning and wildland fire fighting across shared landscapes in New Mexico. American Forests works with several states to advance shared stewardship strategies that include examining their workforce needs as restoration work scales up.

The approach could have a major impact in rural communities, where much of the large-scale planting and forest restoration would occur. Even before the COVID-19 pandemic, many rural communities had long been devastated by depressed economies. Stable, year-round jobs both directly and indirectly linked to forests — such as wood product manufacturing or catering to the massive outdoor recreation industry — would be an economic boon in these areas. 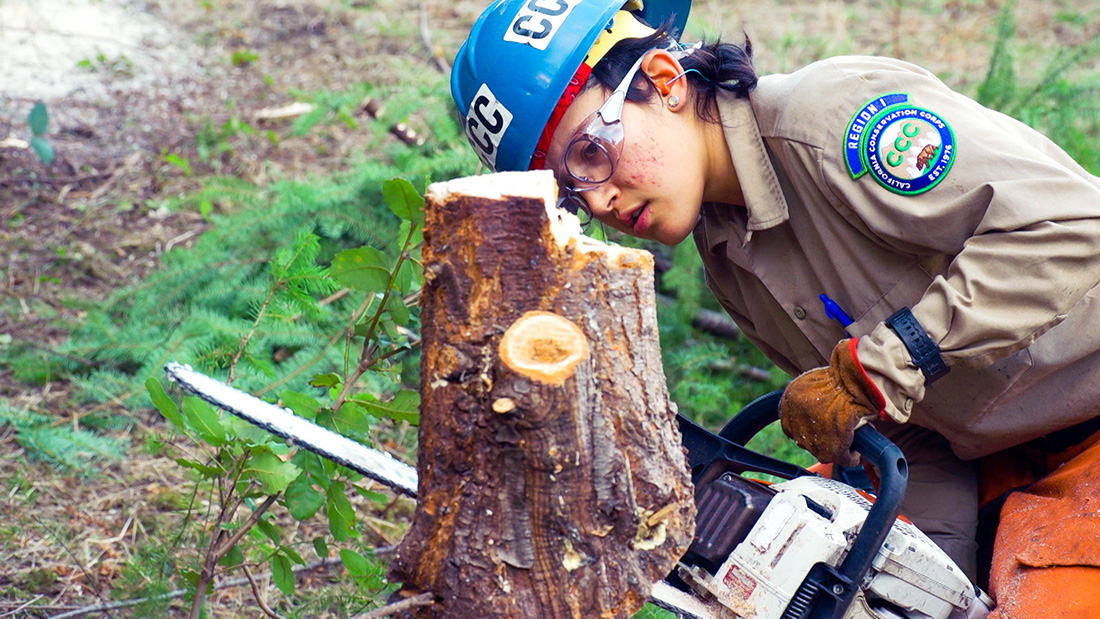 Though they might begin in entry-level positions, Evans says that people in forestry can soon find themselves running drones, doing mapping and even communicating with residents about prescribed burns.

“There is a career ladder,” he says. Making sure that ladder is accessible to those who need it most is more important than ever. One of the best ways to do that is through job training programs such as the California Conservation Corps, which focuses much of its Corps member recruitment on under-resourced communities.

Growing up in a low-income family in a Los Angeles suburb, Luna Morales’ main exposure to nature was a yearly trip to a state park.

After two years in the California program, Morales, now 21, can fell trees with a chainsaw and help reroute creeks. She was promoted to crew leader and is working toward her associate’s degree. “With the background I came from,” Morales says, “I never would have expected to be here.”

“The Cs,” as its members call it, was created by the state of California in 1976. Modeled loosely after the national Civilian Conservation Corps that put 3 million people to work during the Great Depression, it is a state agency and a model American Forests and others believe could be replicated during the current recession.

Corps members receive a $1,905 monthly stipend while getting on-the-job training in everything from building and clearing trails to cutting down dead trees and responding to natural and manmade disasters. American Forests works with the group on a number of planting and shrub-clearing projects.

Workforce development programs are also key in urban areas — especially low-income neighborhoods and some communities of color, which tend to have fewer trees and the highest unemployment. The need for people who can plant, trim and prune trees in cities is expected to grow 10% by 2028.

That’s why American Forests works with job training partners in several cities to support and increase capacity for urban forestry programs, through our Tree Equity: Career Pathways Initiative. We have also developed a guide for creating entry-level urban forestry career pathways programs that target people in communities who could benefit most from entering the field. 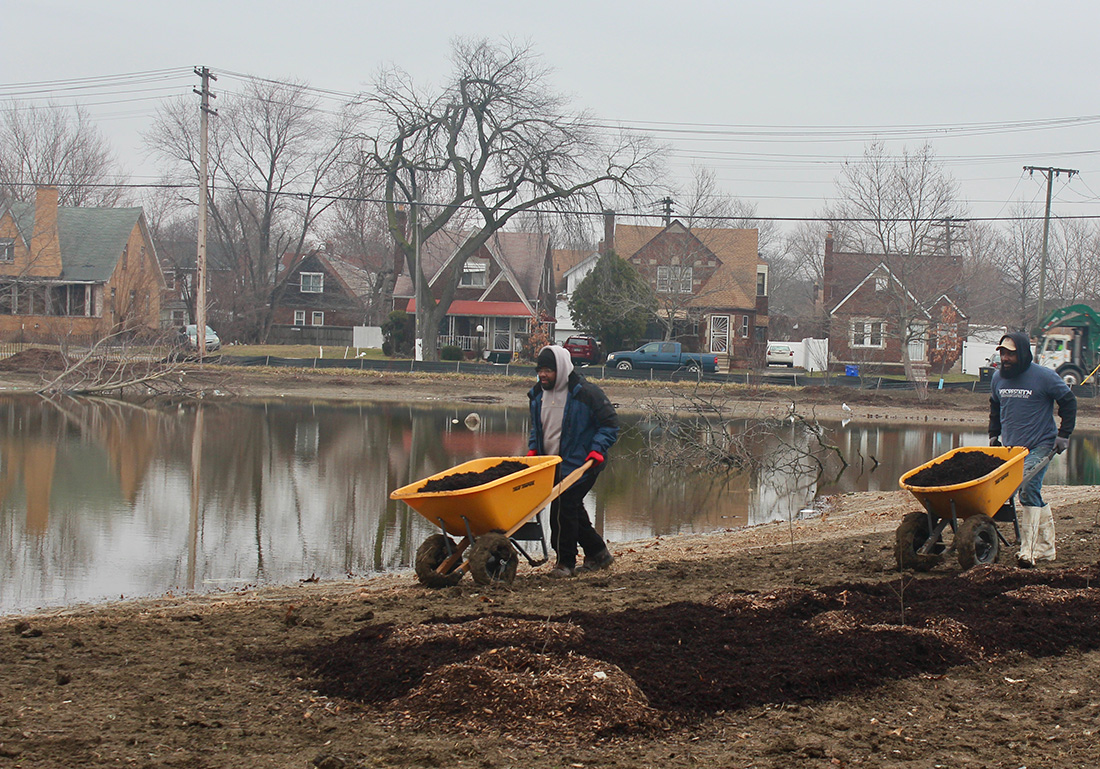 Take William Rucker of Detroit, for example. He had never held a job outside of prison, which he was released from in 2019. He enrolled in an urban forestry training program offered by The Greening of Detroit, a nonprofit that plants trees and provides education and workforce development for people from under-resourced communities, many of them formerly incarcerated.

Rucker has since been hired by “The Greening,” one of American Forests’ partners, and also started his own landscaping business, serving about 30 houses a day. He plans to expand soon and put others to work.

“I’m hiring people from The Greening because I know they’ve been taught, they have qualifications and I can depend on them to show up for work every day,” he says.

Besides forestry skills training, the organization provides a range of support services, helping participants with transportation and housing, as well as basic training about being on time for work. These “wraparound” support services have contributed mightily toward the program’s 87% job placement rate, says Vice President Monica Tabares. 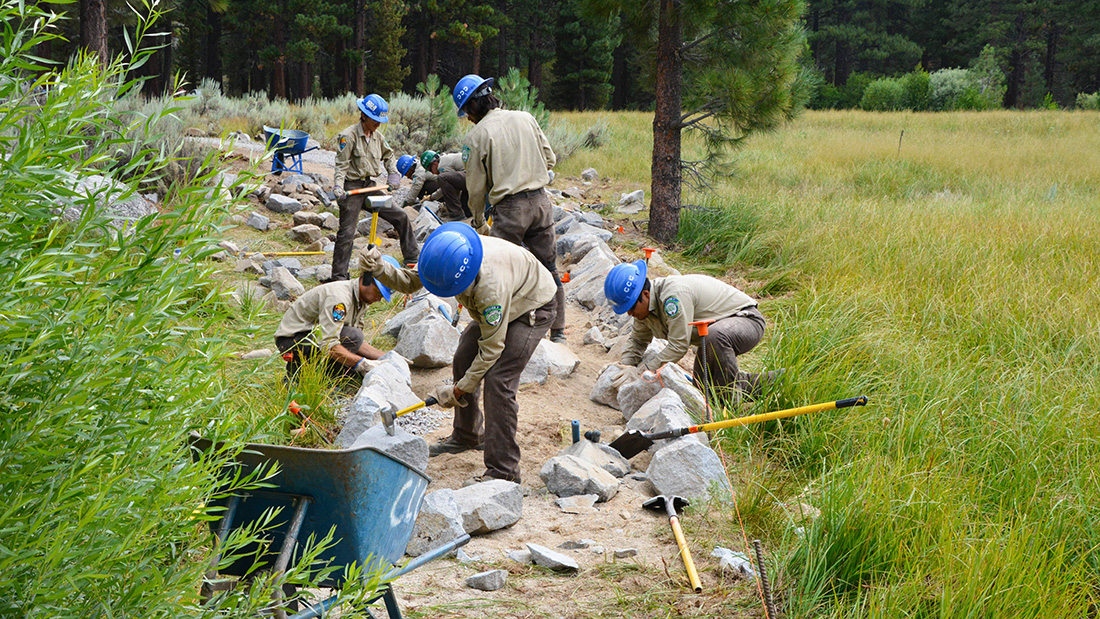 Fortunately, proposals to reforest millions of acres of U.S. forests — and train and hire the workers to do it — have gained steam in Congress in the last several months. This summer, a bipartisan bill called the Great American Outdoors Act was signed into law, providing $900 million annually to expand America’s public land and provide grants to private forest owners to voluntarily protect their forests through conservation easements.[/caption]

To complement that achievement, American Forests helped draft The REPLANT Act, which focuses on conserving the national forests we have, largely by planting trees. The act would provide 49,000 new jobs to reforest 1.2 billion trees. This legislation was introduced in the House and the Senate in July, with bi-partisan support.

But much more will be needed.

Whether a major workforce expansion involves reinstituting the Civilian Conservation Corps, rethinking how to create full-time forest sector jobs, developing more accessible training and paths to careers — or more than likely some combination — the time to act is now. We need to plant and take care of billions of trees. And millions of Americans are out of work.

“Rarely have we had an opportunity to address two huge crises, climate change and the economy, at the same time,” says Daley, of American Forests. “This is the moment to be bold.”

Michele Kurtz writes from Washington, D.C., and is American Forests’ director of communications.

ABOUT AMERICAN FORESTS:  American Forests is a national non-profit organization committed to