Home/Finding Strength and Solace in a Tree

Finding Strength and Solace in a Tree

Evelyn Thompson Lawrence’s story is about Sallie’s Crying Tree, a large white oak growing near the town square in Marion, Virginia. This remarkable woman has spent a lifetime reminding people that this tree — and others like it — represents our history and must be preserved.

Lawrence often says that if the Crying Tree could talk it would tell us that slavery was brutal, that people were sold like horses and dogs, that life was especially hard on black men and women. But it would also tell how valiant people are, how former slaves built communities and how their descendants are today’s leaders.

Marion is not the obvious place to expect this kind of lesson. A small town, it is nestled in the valley between the Blue Ridge and Appalachian Mountains of southwest Virginia. It is a gateway to Jefferson National Forest and Mount Rogers National Recreation Area. Hungry Mother State Park is nearby. The town is known for its Appalachian culture and music, but not for its once-thriving, African-American community. 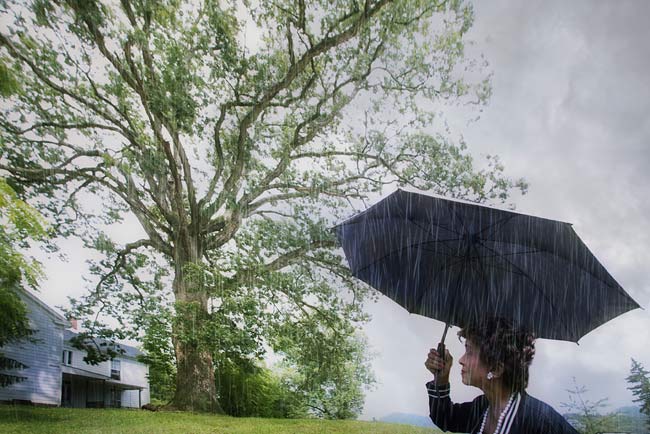 Lawrence’s grandmother, Sallie, was a girl with a special connection to trees. In the 1840s, when she was just five years old, Sallie’s family was owned by a local man who needed money. In order to get it, he sold her mother and father to a landowner from Lynchburg, more than 150 miles away. Left alone, Sallie had the job of being the body servant for the man’s chronically ill wife. Sallie had no family member to go to for refuge and solace, so instead, she adopted a young oak tree as her family. She would go each day to the tree — to talk to it, to cry, to pray and to hug it in times of need.

Like the tree, Sallie had to weather many storms, and yet, she stood strong. She was determined that if she ever got her freedom and had children of her own that she would make sure they got an education, especially since it was against the law to teach a slave how to read or write. When freedom finally came and she later got married, she had 10 children of her own and sent two of them to college. Her daughter Susie Madison Thompson, the mother of Lawrence, became the first black teacher to teach in Sugar Grove and one-room schools in Emory and Pearisburg.

For the last 170 years, Sallie’s Crying Tree has been preserved in the center of little Marion, behind the fire department and north of the Blue Ridge Job Corps Center. For many of those years, Lawrence has taken it upon herself to tell generations of Marion residents the history of the tree, and those individuals have joined her in preserving the health of the Crying Tree by shielding it from the pressures of urban development.

Born in Marion, Lawrence attended local schools before graduating from the University of Michigan in 1952 with a master’s degree in music. She then taught in Marion schools for 44 years and has held countless civic and religious positions, becoming a community leader in her hometown.

William A. Fields, another prominent Marion resident, remembers Lawrence as a teacher in the days before public-school integration: “She taught us to never give up, to plant roots and weather the storms — like the tree.”

Fields, who is student government advisor and leadership coordinator at the Blue Ridge Job Corps Center, takes all incoming students to Sallie’s Crying Tree to learn its lessons and to realize that they can overcome any adversity. He likes to quote Marcus Garvey, an early civil rights leader: “A people without a knowledge of their history is like a tree without roots.”

After retiring from teaching, Lawrence began spreading the history of Sallie’s Crying Tree and its connection to American history to an audience outside of Marion. In 2005, she nominated the Crying Tree to a state-wide remarkable trees project, sending a package of photos, news clippings and handwritten notes outlining the history of the tree to the Virginia Tech Forestry Department, which was conducting the research for the project. When she met with the review team, she enlisted the help of the mayor and a local tree commission, and they so impressed the team that the tree was featured in a subsequent book, Remarkable Trees of Virginia.

As a result of this publicity, people began coming from as far as Philadelphia and Atlanta to see Sallie’s Crying Tree and to stand in its presence.

The Crying Tree joins two other historic Virginia trees that powerfully tell the story of African Americans living under slavery in America. The Emancipation Oak, on the campus of Hampton University, is where many slaves once learned to read — Booker T. Washington is said to have studied under the tree. They met under the tree because there was no school house. The first reading of the Emancipation Proclamation in the South occurred under that tree. The Zion Poplars in Gloucester, Virginia — a grove of trees that appears to have miraculously sprouted from an ancient tree trunk lying on the ground — mark where slaves met to worship before it was legal for them to do so. The often-overlooked trees stand behind Zion Poplars Baptist Church, a national historic landmark.

Despite the recognition given to Sallie’s Crying Tree in recent years, Lawrence continues to look out for her family’s tree. After five years of effort by the local Arbor Day committee, the Marion Town Council recently passed her request to have lightning protection installed at the tree.

Because of Lawrence, many in Marion and beyond have come to know that trees are an important part of our history. Unlike most of our treasured historic icons — dead buildings, shriveled pieces of paper, paintings and artifacts — trees are still with us. They are alive and will stand tall for future generations — if we let them. We must hold on. Thank you, Evelyn Lawrence, for the history lesson.

Jeff Kirwan is emeritus professor of forestry and extension specialist at Virginia Tech. He is a longtime supporter of American Forests and serves as Virginia’s big tree coordinator.

The profound impact forests had on one of America’s greatest authors and his writing.

Venerable Trees of the Bluegrass

If trees could talk...a region's history as told by its ancient trees.