This past summer, friends and members of American Forests joined us for an exclusive adventure in Denali National Park. We were lucky enough for photographer Chuck Fazio, our Artist-in-Residence, to tag along! Fazio also explored several other Alaskan locales prior to the start of our trip, and along his entire adventure, he captured some of the most stunning shots of the beautiful Alaskan landscapes and wildlife. Now, follow Chuck’s journey and the stories he has to tell as you admire the craftsmanship of fine photography. 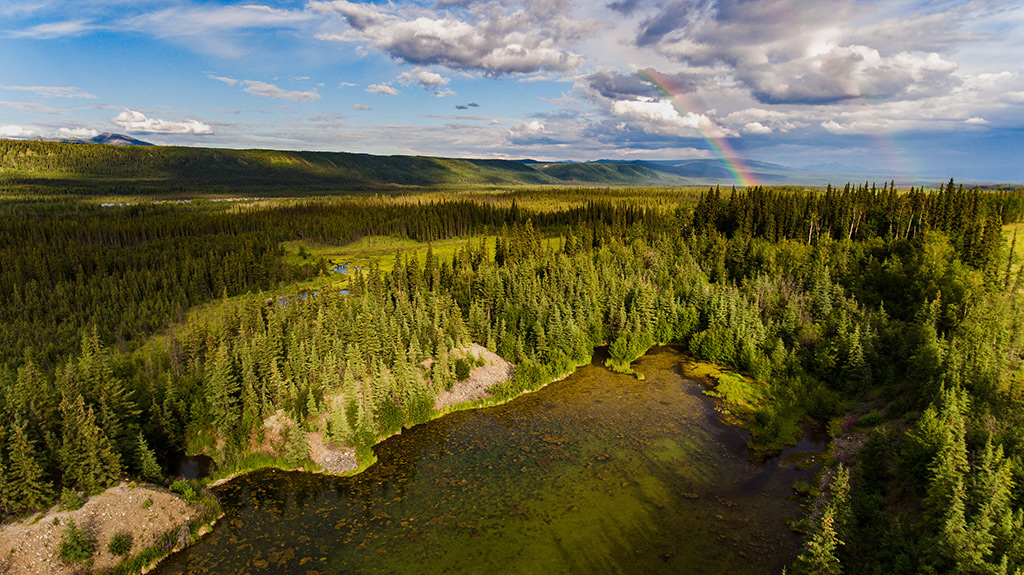 I decided to add a few days on the beginning of the trip American Forests took back in July to Denali in Alaska. My map said a trip starting in Fairbanks made a lot of sense, so I booked a ticket for a 4:30 p.m. arrival and off I went with not more of a plan than that. I like to find cool things to shoot at a destination rather than being influenced by how others have already captured it. I love the challenge, and then the reward, of having a “wow’er” — an image that causes a person to utter the word in joyful reaction to a picture.

I knew as soon as I saw this rainbow I had a sense that I might have my first “wow’er” for the trip. (above) It was a very cool to begin my time in Alaska with a big win. 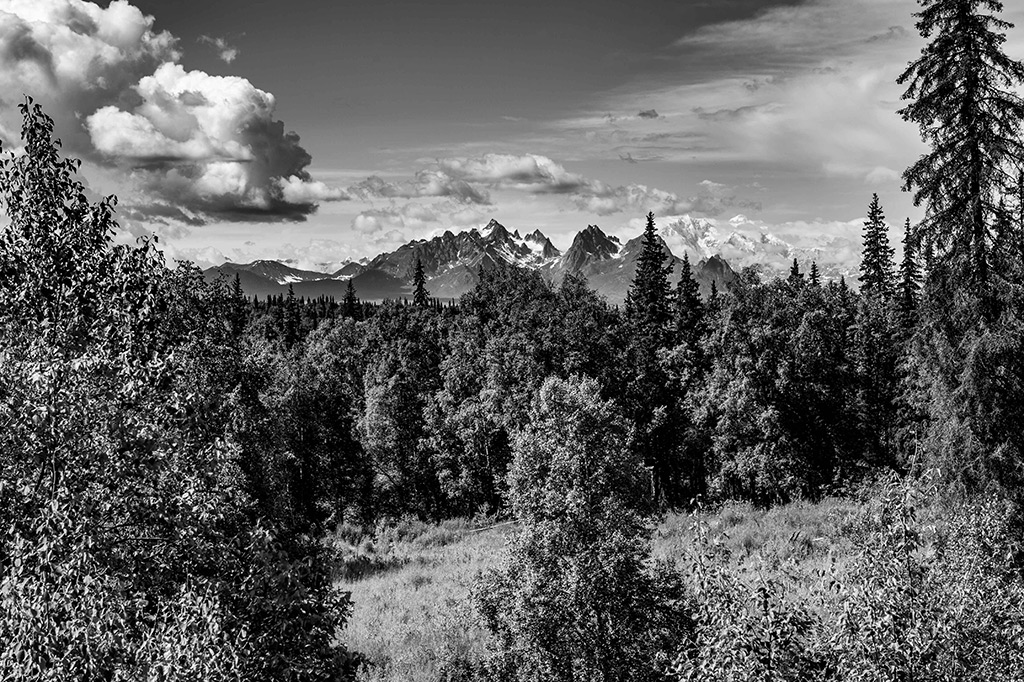 The Parks Highway from Fairbanks to Anchorage is one of the most beautiful drives in North America. Case in point. I almost missed this wonderful scene because I was focused on technology instead of focusing first on the grandeur that was so obvious in front of me. I was distracted by a drone issue that caused me to turn away from the range. I was in a place with other people, so it was easy to hear the talk of the cool and somewhat rare sighting of the summit of Mt. Denali. I might have been distracted, but I was prepared to get it once I knew I wanted to shoot it. (left) 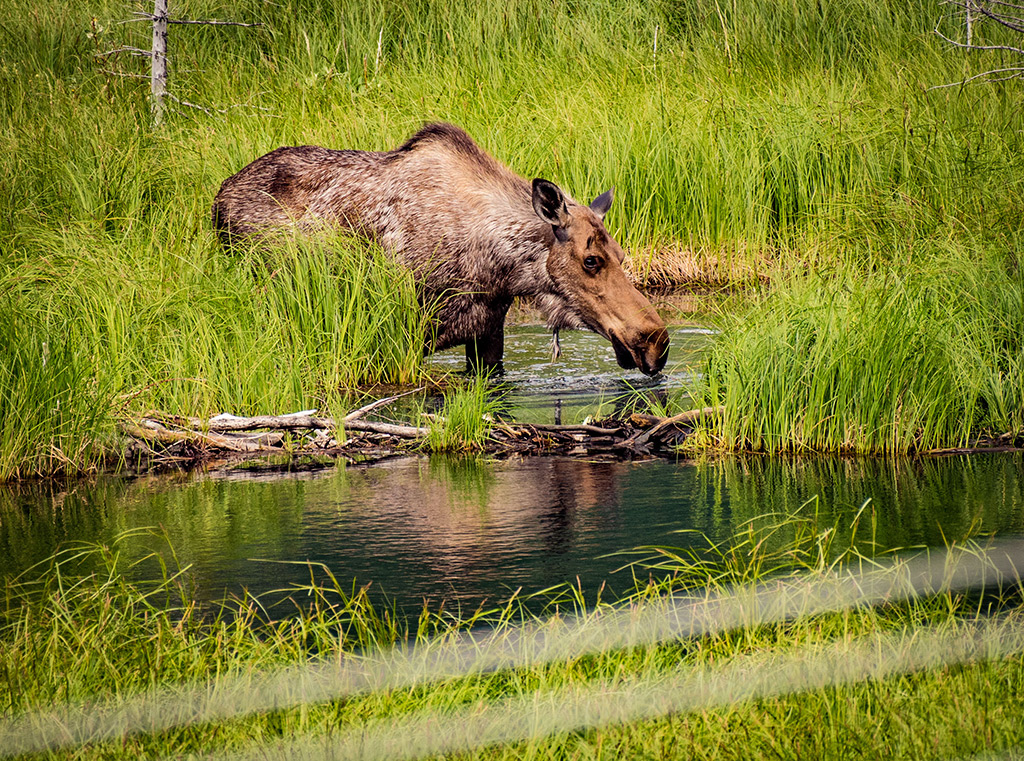 I got to Anchorage around 7:30 p.m., which pretty much added up to a 12-hour day driving through the Alaskan countryside. But, the thought of stopping made no sense. I could do a four-hour drive to the coastal town of Seward.

The Parks Highway is full of wildlife viewing opportunities. A couple cars parked on the side of the road is always a good indicator of something special to see — in this case a moose, which love to wade into a lake or pond and submerge their head to chomp down on grass growing on the bottom. (right) 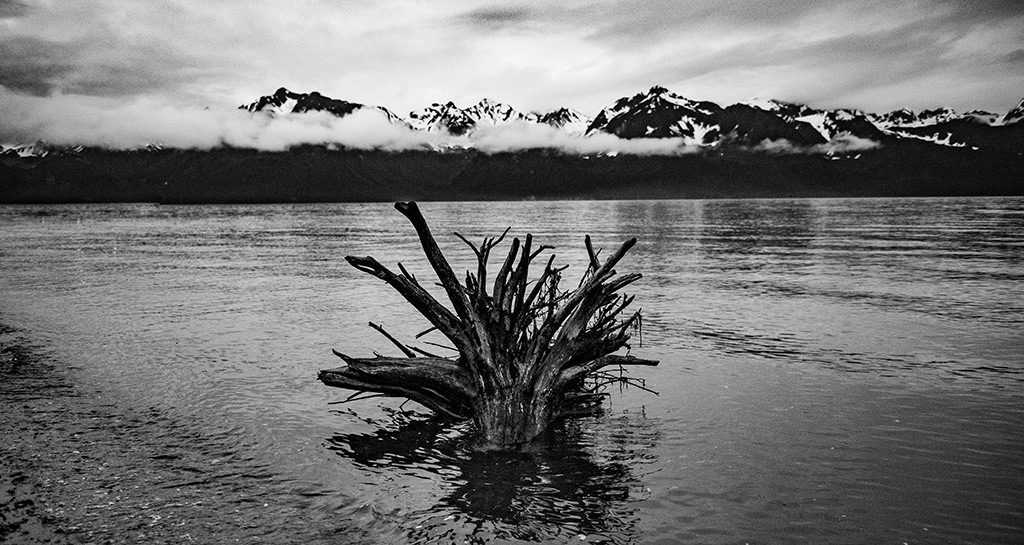 I got to Seward around 11:30 p.m. and — who knew? — every hotel in the town was closed for the night. I knew the hazard when I left Anchorage, and I was prepared to sleep in the car… mostly because I knew if I had looked for a room and didn’t find one, I might not have made the trip. And, not making the trip down to Seward would have been a very bad thing. The one hotel not closed had one room left but “it didn’t have cable.” I felt bad about taking the discount offered because I thought “cable? Unless a UFO landed, there was nothing I wanted to see on cable.” Not only did the guy hook me up with a room, but he told me what boat tour to take the next morning and that, “oh by the way, there’s a really good shot right now, at 12:30 a.m.,” just down the scary gravel road next to the harbor, the deep cold harbor.

I thought “Hey, if someone says there’s a picture to take, damn the whole potential drowning thing. Let’s do this.” And, this is what I took at 12:20 a.m. that morning. (above left)The boat tour the next day turned out to be one of the greatest nine-hour stretches I could ever hope to have as a photographer. Our destination was the Northwestern Glacier, named after the eponymous university. The glacier is visible in the distance. It may have been a nine-hour tour, and it never got old with views like this! (below) 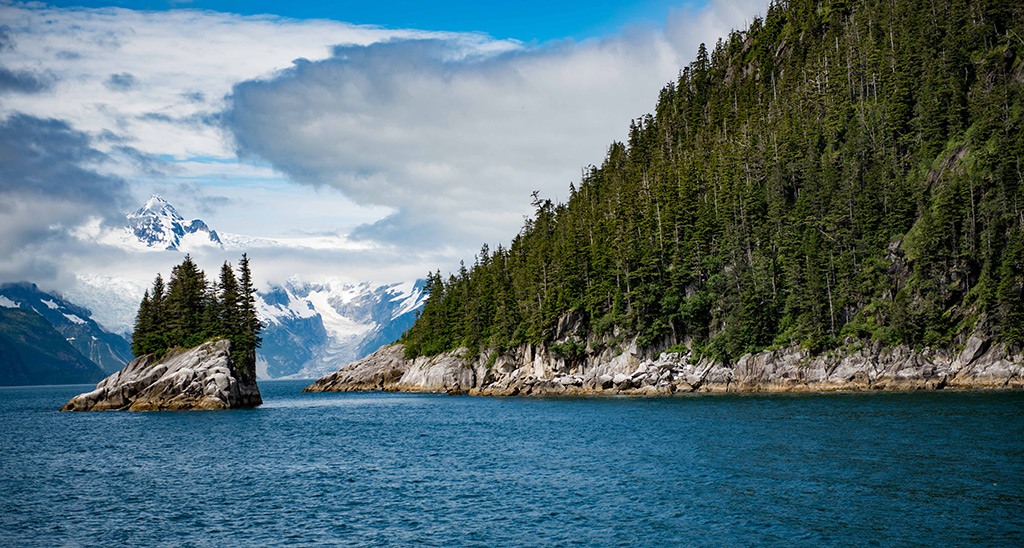 And now, the Eagle Series. This was all about putting yourself in a position to be lucky. After flying across the entirety of North America and again across Alaska, then taking a float plane further into Alaska, I walked a mile and a half through bear trails finally arriving at a place where some incredible wildlife lives — Brooks Camp. But, now what? At Brooks Camp, three main viewing platforms exist, but the one closest to the falls and, thus, the bears in the stream, was limited to only 40 people for hour-long viewing periods. And, you can wait hours to get out to the third viewing platform, but once you do, incredible sights are only a possibility. There are no guarantees and, in fact, it took two days to get the totality of my shots at Brooks. The first day, I saw an eagle perched on a tree across the river. I trained my 500mm lens on it and waited some 15 agonizing minutes before she flew. The challenge, and the luck, when that happened was keeping her in focus as she made a swoop around the river. Out of 23 shutter clicks, 22 were miraculously in focus and 10 of those images were absolutely stunning. (below) 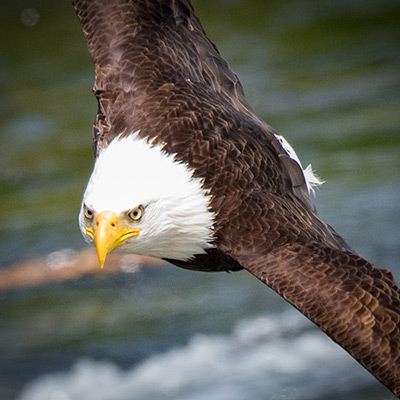 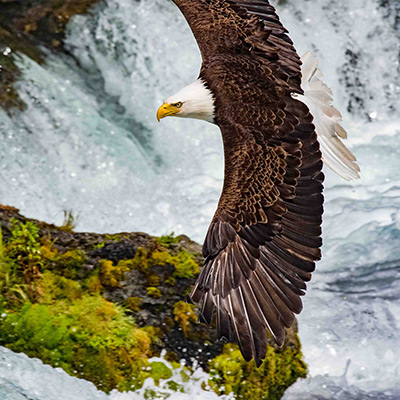 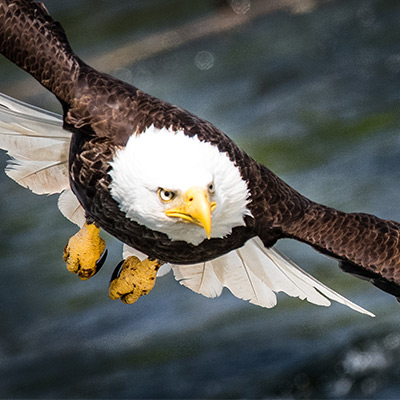 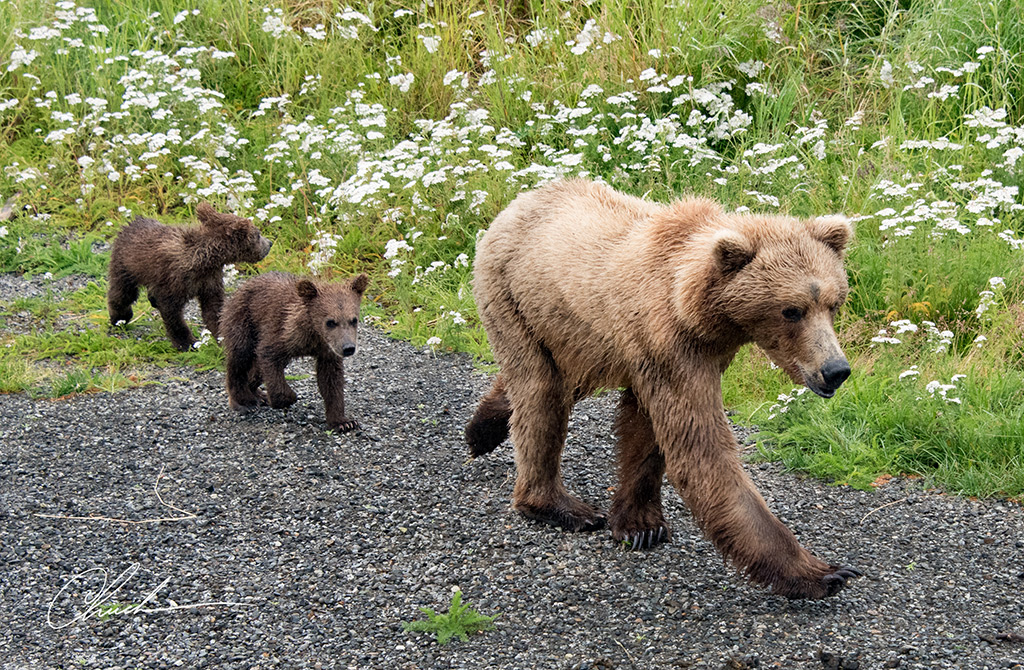 In addition to eagles, I got to see a number of bears out in the wild. A sow and her cubs were not affected by our presence. There seems to be an understanding among the species: The bears know humans are neither a threat nor a food source, and humans know to give bears their space. There are no fences along the trails so turning a corner and seeing this is no shock or surprise. Momma was still looking thin from hibernation and child rearing, but that’ll change soon as she starts to feed on the salmon making their way up stream. (right)Although I got plenty of great bear-eating-salmon shots my first day shooting at Brooks, I didn’t have the one shot I really wanted. No bears were at the top of the falls catching fish in mid-air — a shot I wanted badly. So, one of my best decisions of the trip was to plan for two days at Brooks. You don’t come all that way and not plan on a washout one of the days. That time of year in Alaska, the weather is very unpredictable. It would be easy to get days of pouring rain so to hedge my best, I flew back into the small town of King Salmon for the night with the intention of planning to go back to Brooks for another day’s worth of shooting.

It was a good call, as this sight greeted me as soon as I got back out to the third viewing platform the morning of day two. I was literally giddy when I saw this beautiful brown bear at the top of the falls trying to catch salmon. (below) 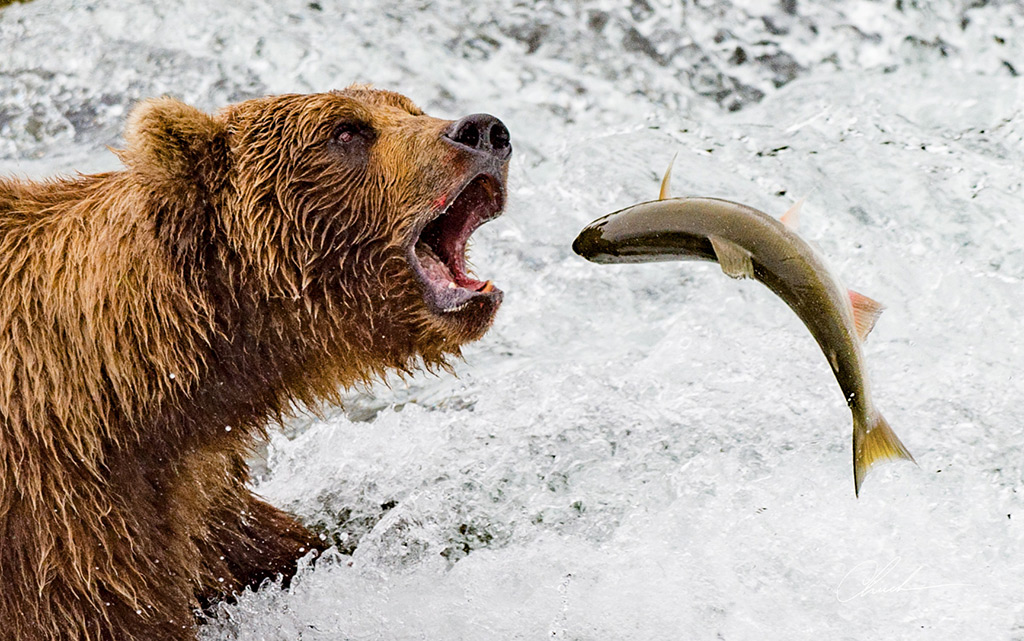 During the American Forests’ Forest Adventure portion of the trip while exploring Denali National Park, I was also able to capture some great shots, but this was a favorite! It is a singularly unique experience to view a sunset at midnight during the summer. It never gets totally dark during the months surrounding the solstice. This sunset was captured in Denali, taken around 12:30 a.m. (below) 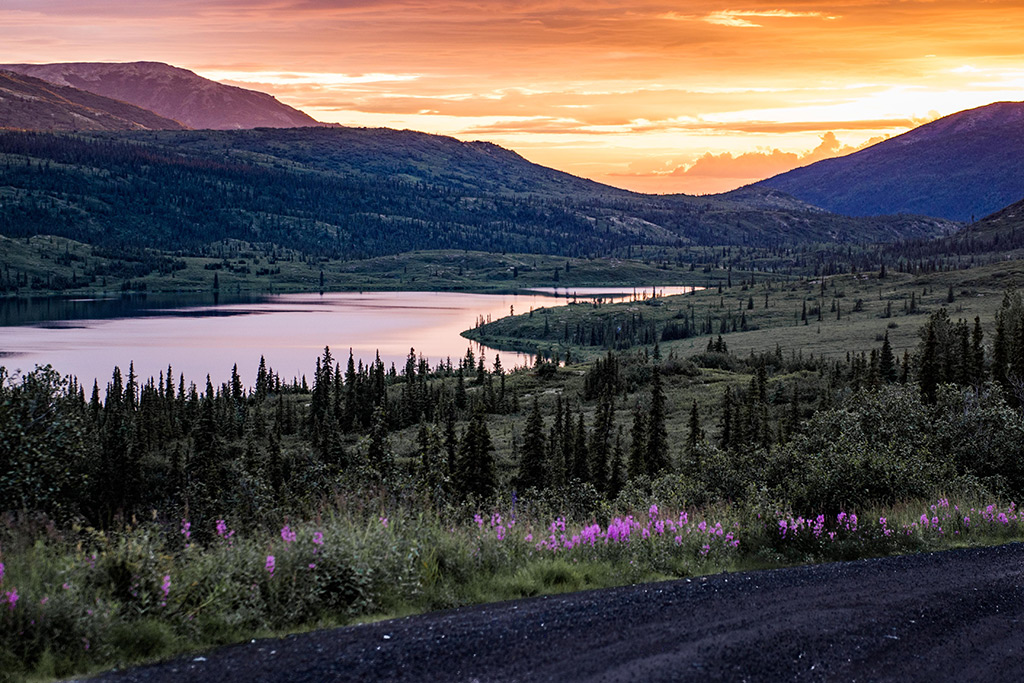