Home/Earthkeepers: Restoring the Roots of Rock

Earthkeepers: Restoring the Roots of Rock 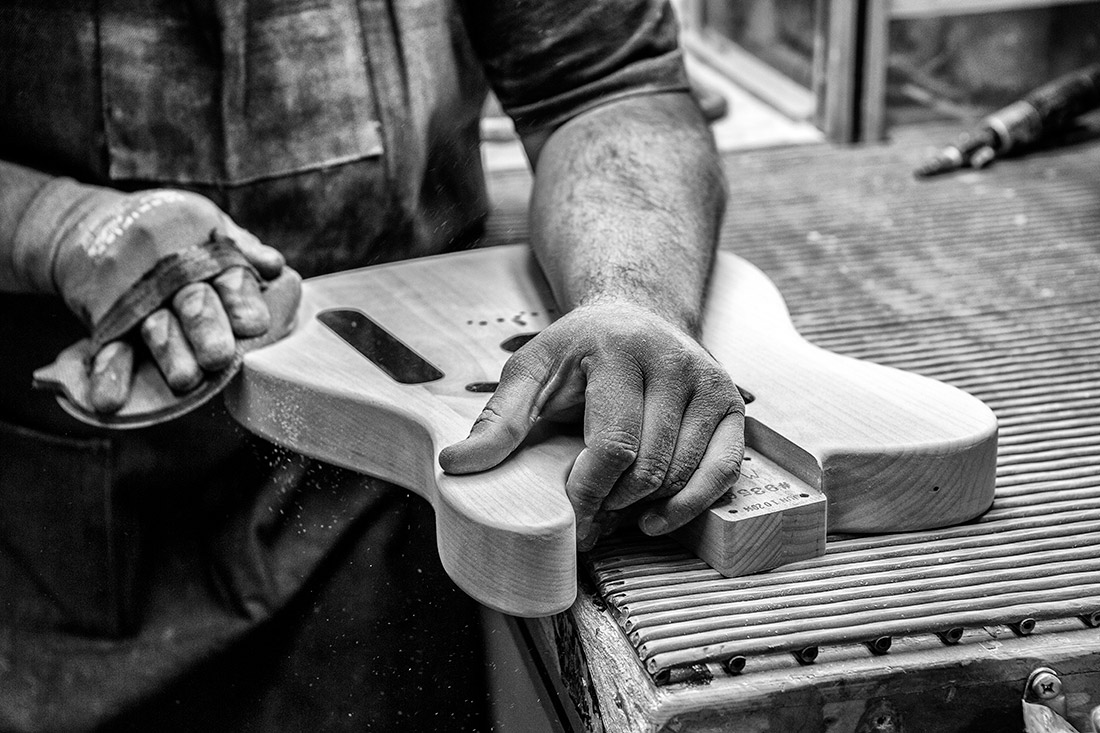 SHREDDING A SWEAT-DRENCHED guitar solo before thousands of ecstatic fans. Inspecting tree bark for signs of resistance to an invasive insect.

It’s hard to imagine two things that, at first glance, have less in common.

But, in fact, they have much in common. Insects that damage or kill trees ruin the wood that musicians depend on — the wood from species that are used to make guitars and other instruments.

“We see several challenges for the future of ash guitars, due to the destruction caused by the emerald ash borer (EAB),” says Born. “Ash has been a staple for Fender guitars for 70 years and has been the genesis of a lot of great music over the years. Through this project, we are taking steps to cultivate EAB-resistant ash varieties, so we can still build ash guitars 60 to 70 years in the future!”

The fittingly named Roots of Rock initia- tive begins with boots on the ground in national, state and private forests to find trees that faced the full brunt of an infes- tation or disease — in this case, emerald ash borer — but, yet, survived. The genetics of these particular specimens allow them to persevere despite the same brutal attacks that have killed hundreds of millions of other ash trees.

Once these trees are identified, scientists at the U.S. Forest Service conduct testing to confirm their resistance. For those that pass, shoots of new growth and seeds are collected to capture that genetic fortitude.

It can be a complicated process, given that populations of trees adapt specifically to their local bioregion. The genetics that thrive in one area might be inert just a couple of hundred miles away. So, the process needs to be replicated over and over again across the landscape. One exception to this situation is in urban forests, including street and landscape trees, where genetic diversity is not as critical because the trees are typically planted and not expected to be a self-sustaining population over many generations.

Once the seeds and shoots are gathered, the Roots of Rock team begins breeding and testing new pest-resistant trees. This can occur through seed orchards, nurseries, clone propagation or progeny testing, whereby the genetic information of the resistant candidate comes from its offspring, as opposed to the tree itself.

Then, it’s time to propagate those trees at scale. Cue American Forests and its track record of working with the U.S. Forest Service, local nonprofits and hundreds of corporate partners to plant 60 million trees over the last 30 years. We will build off of that experience to plant thousands upon thousands of improved seedlings that will restore the health of impacted natural and urban forest lands.

“THEY SAY THE HEART OF ROCK AND ROLL IS IN CLEVELAND”

We have kicked off this work by embedding an American Forests forest health expert in The Holden Arboretum outside Cleveland through the Great Lakes Restoration Initiative, in partnership with the U.S Forest Service. There’s a certain poetic lyricism to the fact that the partners have chosen this as the starting place. This region is home to the pulsing industrial heart of the nation that has generated so many musicians over the decades, from the likes of rock and roll in Cleveland to Motown, garage rock and techno in Detroit.

In fact, minutes from the Third Man Records store created by native Detroit rock legend Jack White (perhaps best known for his work in The White Stripes, The Raconteurs and sports stadium loudspeakers around the world), Roots of Rock is installing the project’s first 20 emerald ash borer resistant ash trees. They will grow in a new vacant lands nursery American Forests has spearheaded development of as part of a broader redevelopment of the abandoned Herman Kiefer Medical Center and surrounding neighborhood.

This “ground zero” for ash species restoration is particularly fitting because it was through the Port of Detroit that emerald ash borer first entered the United States in 2002 from Asia.

Jennifer Koch, Ph.D. research biolo-gist at the U.S. Forest Service’s Northern Research Station in Delaware, Ohio, sees this multi-sector collaboration as a critical step in advancing forest health solutions not only in the Great Lakes but also nationwide.

“It is my hope that using ash as a model, we will demonstrate the value of breeding programs to harness naturally occurring resistance to combat the invasive insects and diseases that threaten our native tree species,” says Koch. “In addition, the networks, collaborations and infrastructure we will build through this partnership will position us to more efficiently respond to other pests currently threatening our forests and prepare us to respond quickly to new threats that may arise in the future.”

As Roots of Rock grows, it will expand beyond the afflictions of ash into propagating resistance to beech bark disease and hemlock woolly adelgid. The result will not only be healthier, more resilient forests, but American companies, such as Fender Musical Instruments, that rely on specific North American species will also be able to continue serving future generations of shredders and pickers.

The economic lifeblood of trees

Take a look at some of the unique jobs generated by, and reliant on, forests and trees.

The Understory: How many trees do our cities need?

A new study reveals how to advance Tree Equity by planting 31.4 million trees.