One man’s crusade to save an Ozark Legend.
Story & photos by Paul Hagey 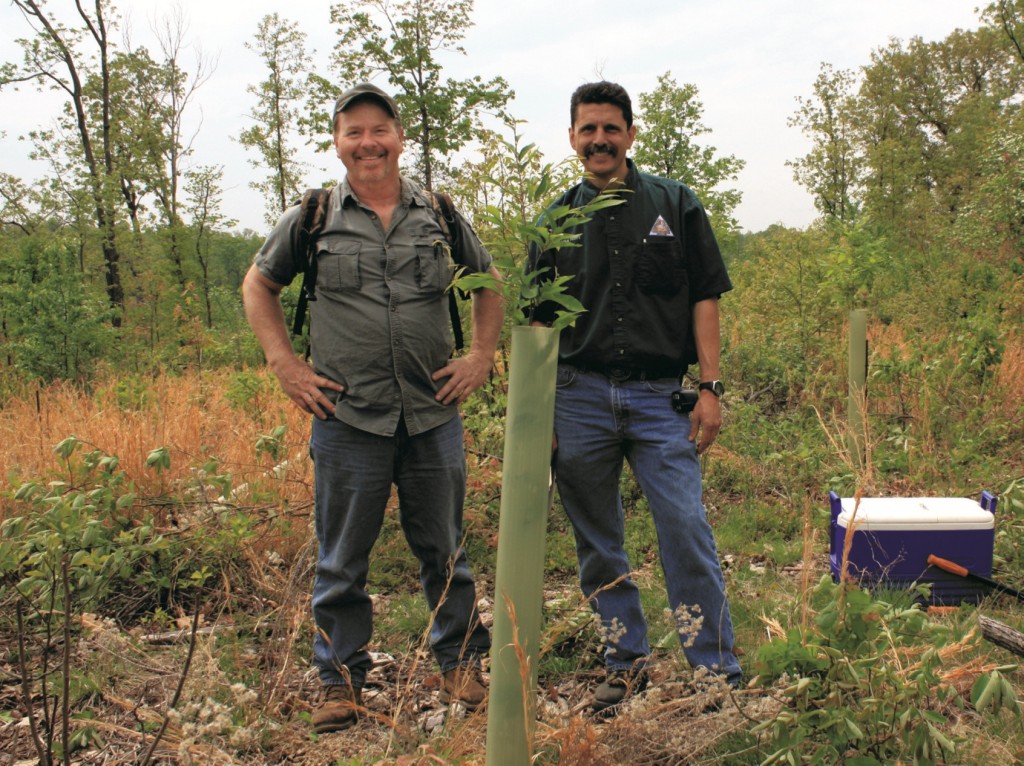 Imagine being Johnny Appleseed in a world where nobody knows what the apple is,” says

Stephen Bost, 53. “That’s what I feel like.” Bost is working to save the Ozark chinquapin (Castanea pumila var. ozarkensis), a close relative of the American chestnut (Castanea dentata) that has unfortunately shared the classic American tree’s devastating fate. Both species have been driven to the brink of extinction by the fungus Cryphonectria parasitica, also known as the chestnut blight. In 2006 Bost founded the Ozark Chinquapin Foundation, now several hundred members strong, to keep this tree from disappearing from the landscape and people’s memories.

The chestnut blight arrived in America from China by way of a Chinese chestnut planted in the Bronx Zoo. First documented in 1904, the fungus spread at a radial rate of 20 miles a year throughout the eastern US, killing an estimated 3 billion American chestnuts, one of the greatest species die-offs in modern history. The iconic American chestnuts were once a major component of eastern forests and a valuable timber tree.

After World War II, the blight jumped the Mississippi River and attacked the Ozark chinquapin. The pre-blight Ozark Chinquapin—isolated first by glaciation and then by the Mississippi River from its American chestnut and Alleghany chinquapin relatives—became an important canopy tree in the ancient mesic forest that makes up today’s Ozarks. Like the American chestnut, the Ozark chinquapin cannot reproduce sexually in any appreciable amount, and survives today in its native range as a blight-stunted, brushy, multi-stemmed shrub. 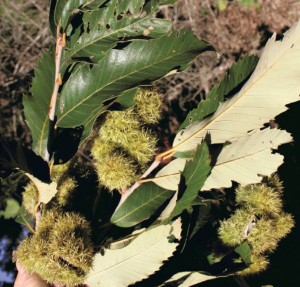 As Ozark chinquapins develop, they produce burs and seeds; a step that has been difficult to coax out of the declining species.

Researchers can pinpoint when the blight arrived in their neck of the woods. By analyzing data collected from tree-core studies, retired paleoecologist Fred Paillet of the University of Arkansas was able to pinpoint 1957 as the year the blight ravaged a research spot in northwest Arkansas.

In its healthy days, the Ozark chinquapin grew on well-drained upland sites and out-produced most other trees in the forest. A mature Ozark chinquapin produces 6,000 nuts a year, while a mature white oak can produce no more than 2,000 nuts twice a year. The sweet-tasting chinquapin nuts have the highest protein percentage of any tree in the Ozarks.

The blight has been so thorough that most Ozark natives, outside of the older generations, don’t even know the tree. A Missouri native, Bost once spent summers and weekends at his family’s springside cabin in the heart of the Missouri Ozarks, a place he calls the “cool, green, and shady forest that shaped

[his] life.” Now a Missouri State Park naturalist, Bost says that just 10 years ago he didn’t know what an Ozark chinquapin was.

“I’d never even heard of the tree,” says Bost, astounded. It wasn’t until a late-1990s bowhunting trip through the Ozarks that he finally decided to check into a tree that one of his older Ozark-native friends, Hearold Adams, had reminisced about around the campfire. Adams, now 91, talked about the chinquapin trees he loved above all others, the sweet nuts that his family harvested, and the wildlife that called the trees home.

He’s calling it a chinquapin, but it’s an American chestnut, Bost thought to himself. But after checking some maps and seeing that the American chestnut’s range didn’t extend into areas west of the Mississippi, he conducted more research. Visiting libraries and museums throughout Missouri, Arkansas, Texas, and Alabama, he sought more information. Eventually he found a 1907 vegetative map that showed the Ozark chinquapin covering 40 percent of Missouri.

He thought, I’ve fished, canoed, hunted, and set trap lines all over this region—why haven’t I ever seen or even heard of this tree?

Finally convinced of its existence, Bost still had to find a living tree. “It was like hunting a ghost in the forest,” he says. Finally, on a cold, dripping Ozark winter day in January of 2006, after several years of searching, he met his chinquapin ghosts on a cherty, loamy, northwest-facing hillside just outside of Yellville, Arkansas. 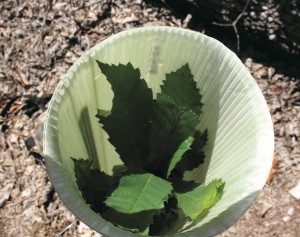 As the project moves forward, some specimens, like this 4-month-old sapling show incredible hardiness, and can grow even in rocky, dry soil.

Since then he has searched—and inspired others to search—high and low, hill and hollow throughout the Ozarks to find mature Ozark chinquapins and gather their nuts to preserve the tree’s genetic diversity. In the process, he and others note which trees exhibit greater degrees of blight-resistance. Bost says he and his Ozark Chinquapin Foundation colleagues have done a good job with that, and now they are focusing on crossing the more blight-resistant individuals in the hope of creating a resistant lineage. It’s all part of a four-stage action plan to save the tree: Preserve genetic diversity, find blight-resistant trees, cross-pollinate them, and then propagate the seeds.

The work has not been easy; promising trees have died, planted seeds have been eaten by wildlife, and healthy trees—already few and far between—seem to be dwindling.

Bost acknowledges he is only the latest face in the unselfish effort by many to save the Ozark chinquapin. The annual Ozark Chinquapin Foundation meeting in March indicated the tree’s broad support, with citizens and representatives from federal, state, and private agencies attending. Bost compares the years of work to save the Ozark chinquapin to slowly honing in on a radio-station signal. Sometimes it’s strong, sometimes it’s weak, but the signal is slowly coming in louder and clearer as the goal gets closer.

Bost’s passion is both clear and contagious. He describes his life in thankful terms–being outside, raising honeybees, wearing blue jeans, being with trees–and in the process shares the sense of fulfillment he gets from his work. The effect one person can have on a land and a community is a point of inspiration that helps him continue. “One person can make a huge difference,” he says, “and I have come to realize that we never fully understand the impact we have on other people or the world around us.”

Paul Hagey is a freelance writer living in Oakland, California. See his work at www.paulhagey.com.

Why I’m Here: Passing it On

Meet our new editorial intern, Nick, and read about his inspiration for conservation.

Getting Serious about Soil Part 2: Involving the Next Generation

In the second installment of this three-part series on soil, learn about a program to teach children the importance of soil.

Playground Science: Getting Kids Excited about Science and Nature

Want to help your kids appreciate and understand nature? Here's some tips for fostering an inquisitive mind for the wonder of nature!