Want to plant billions of trees? Invest in nurseries first.

Want to plant billions of trees? Invest in nurseries first.

As the world barrels towards 1.5 degrees of planetary warming, healthy forests are coming into laser focus as the best nature-based solution for slowing climate change. In the United States, the opportunity to create healthy forests is enormous. The Reforestation Hub shows that 133 million acres across the country could be reforested.

But as governments, companies and others gear up for mass reforestation, a big question remains: Where exactly will we get billions of seedlings to grow what we need on the land that has the highest potential for reforestation (66 million acres)? We will need a whopping 34 billion seedlings to do that by 2040?

Without change, the nation’s nurseries cannot come close to meeting the skyrocketing demand for trees. They need to more than double their current output to meet the 2040 goal, according to Challenges to the Reforestation Pipeline in the United States, a new study done by 18 people, including two from American Forests. This would require an extra 1.7 billion seedlings a year, bringing total annual production to 3 billion.

The study is the most comprehensive look to date at the barriers to ramping up seedling production in the U.S. Researchers surveyed 111 nursery operators, who collectively manage half of the nation’s tree seedling output. This included high-volume commercial operators, federal- and state-run nurseries and managers of small nurseries raising rare native trees. Follow-up interviews were done with 26 of them and 10 others involved in reforestation (e.g., seed collectors, seed banks, foresters and tree geneticists). 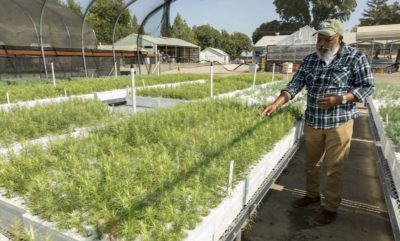 While most nurseries said they are very willing to expand, serious issues make it hard for them to do so. Chief among these are an inadequate workforce and lack of contracts of sufficient size and duration to warrant investments in scaling up. The bulk of nursery work is seasonal. Most nurseries rely on migrant workers to fill these temporary jobs. Nurseries also struggle to find skilled, full-time employees, especially as many nursery managers and experts near retirement.

Nurseries are also wary of the economic risk that comes with building more greenhouses, buying more land or more equipment and growing more seedlings. Seedlings take about two years to grow. It can be hard to predict market demand that far in advance. To limit the likelihood of having to throw out seedlings if buyers don’t materialize, nurseries usually grow what is needed to fulfill contracts with owners of large pieces of land. This often means there can be a serious undersupply of seedlings after extreme wildfire seasons and other catastrophes, for those who did not contract a grower prior to such an event.

Another constraint to ramping up reforestation is that there are not enough diverse and climate-adapted seeds or people available to collect seeds. Nurseries can’t respond to increasing demands with seed stock of the appropriate species, genetics and quality if seeds are not available. For instance, supplies of low-elevation seed sources in California are running low as demand skyrockets, due to wildfires which are consuming what seed source remains. 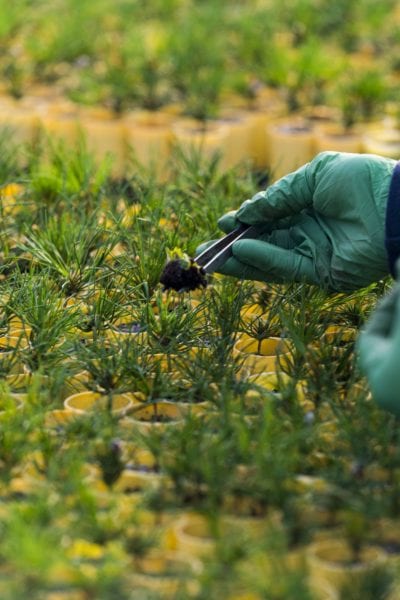 Doubling nursery production will be tough, but if forests are to adapt to climate change and play their part in mitigating it, doubling can, and must, be done. Fully reforesting the U.S. would capture an additional 333 million tons of carbon a year — the equivalent of removing 72 million cars from the road — help scrub air pollution in cities, provide clean water and reduce the risk of heat-related deaths.

Collecting seeds — as well as growing, planting and caring for all these trees — would also be a major economic boon. Every $1 million invested in nursery capacity and operations supports 14 to 48 jobs, depending on the state. Many nursery and other reforestation jobs are in economically depressed rural areas, where economic expansion is unlikely to occur without explicit strategies.

American Forests’ new policy report, Ramping Up Reforestation in the United States: A Guide for Policymakers, offers a roadmap for tackling pinch points throughout the reforestation pipeline. There are critical roles and leadership opportunities here for the private sector and government.

In the private sector, the carbon removal market is beginning to boom. “Net zero” commitments already represent more than 50% of global Gross Domestic Product and 25% of global emissions. The largest players are driving further net zero investments. One recent analysis suggests that, by 2050, revenue from the carbon removal market could exceed the present market values of the oil and gas industries.

As the net zero economy expands over the next two decades, the private sector will meet a large share of its net zero commitments through nature-based carbon removal. Growth in reforestation projects funded with carbon finance will send market signals to nurseries and landowners to grow and plant more trees. This will ripple through the reforestation pipeline. But to be ready, the public sector must lead, too.

A federal infrastructure policy package, for example, could include funding for nursery development and tree planting projects. U.S. Department of Agriculture (USDA) Rural Development business loan guarantees could help nurseries grow to meet coming demands. The soon-to-be-introduced REPLANT Act would remove the antiquated $30 million cap on the Reforestation Trust Fund, which uses revenues from tariffs on foreign wood imports to reforest land in national forests. The U.S. Forest Service is the nation’s largest forest owner, with a reforestation backlog of 8 million acres — a need that’s growing by hundreds of thousands of acres a year, largely due to wildfire.

For private land, such as family-owned forests and marginal pastureland, the USDA could reinvigorate Farm Bill programs to promote tree planting for conservation. This would bring more seedling orders to nurseries and planting projects to private landowners.

On the workforce front, the Biden administration recently called for the creation of a jobs program, the Civilian Climate Corps, to train young people for environmentally friendly careers, such as forestry. In fact, President Franklin D. Roosevelt’s depression-era Civilian Conservation Corps created many of the nation’s first state nurseries and, as a result, was able to plant more than 3 billion trees.

Of course, we cannot just plant trees and walk away. Proper management is essential for ensuring our forests can handle the effects of climate change.

As worst-case climate change scenarios loom, the U.S. needs to drastically slash fossil fuel emissions, while acting urgently to restore our forests. This means doubling seedling production, investing in job programs and boosting funding for tree planting projects. Like all big things this country has achieved, this will take gumption, collaborative partnerships and leaders in the public and private sectors. A stable climate is at stake — let’s get growing.

The study and policy report were made possible with generous support from the Paul and June Rossetti Foundation and Sant Foundation.

Statement on the Inclusion of REPLANT Act within Infrastructure Framework

July 29, 2021 In response to the inclusion of the REPLANT Act within the Bipartisan Infrastructure

July 1, 2021 In response to the United States House Committee on Appropriation's decision today to