Today, I am excited to share the results of a year-long initiative with you.

Last fall, American Forests began a project in cooperation with the U.S. Forest Service’s Urban and Community Forestry program to conduct research on and spread awareness of the amazing benefits of urban forests. Urban forests are ecosystems composed of trees and other vegetation that provide cities and municipalities with environmental, economic and social benefits. They include street and yard trees, vegetation within parks and along public rights of way, water systems, fish and wildlife. As part of this project, we looked at 12 remarkable cities to garner lessons and models that other communities might use in building their own urban forest programs.

Looking at these 12 cities — Atlanta, Austin, Baltimore, Denver, Detroit, Indianapolis, Milwaukee, Portland (Ore.), Sacramento, Seattle and Washington, D.C. — I have been deeply inspired by the urban forest work going on around the country and by the local heroes who are engaged in this work.

For instance, in Detroit, it is no secret that the Motor City was especially hard hit by the decline of the U.S. manufacturing sector. With massive tax revenue declines, taking care of the urban forest became an increasingly difficult prospect for the city. But Detroit’s people pulled together to overcome adversity and do great things together. During the past two decades, they have formed nonprofits, built partnerships, engaged local corporations and mobilized neighborhoods, all in support of building a healthy urban forest. One program (of many in Detroit) teamed police officers up with neighborhood residents to plant trees together in neighborhoods. This program didn’t just grow trees; it grew trust, pride and cooperation, where little had existed before. And this is just one powerful example of the level of community engagement and commitment we found throughout the 12 cities.

In Denver and Sacramento, we discovered cities with very arid climates that have been transformed by planting and nurturing trees and greenspaces.

There’s Baltimore, which is breaking down social, economic and neighborhood boundaries through tree planting and other green initiatives.

Austin is helping to cool its long, hot summers by planting trees, whereas Portland and Milwaukee are using green infrastructure to help with water flow issues. 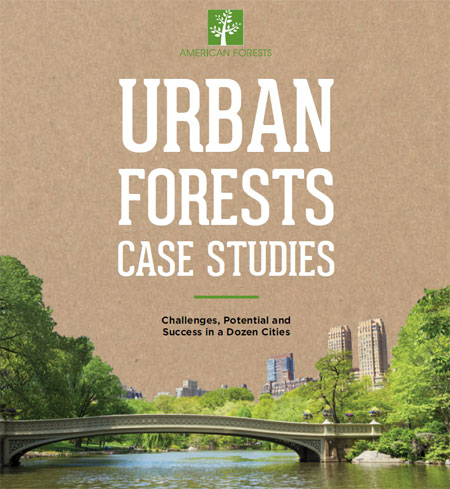 Across the nation, we discovered countless programs, plans and partnerships that are creating healthier, greener cities.

Over the next few years, we’re going to continue to look deeper at how communities across the nation are being transformed with trees. We will also be partnering with these cities to help continue their good work. But while we put those plans into motion, I encourage you to visit our newly launched Urban Forest Program area to read just some of the case studies and discover how urban forests — and the volunteers, professionals and leaders who are building them — are making a difference in cities and towns like yours in every region of the country.