Home/Blog/This Is It! The Quest for a New Champion Sugar Pine

This Is It! The Quest for a New Champion Sugar Pine

Finding a champion tree is certainly an adventure! So, we wanted to share this vivid account of the quest to find a sugar pine that is pending nomination as a champion, as told by Carl Casey, nominator of the current sugar pine co-champion. 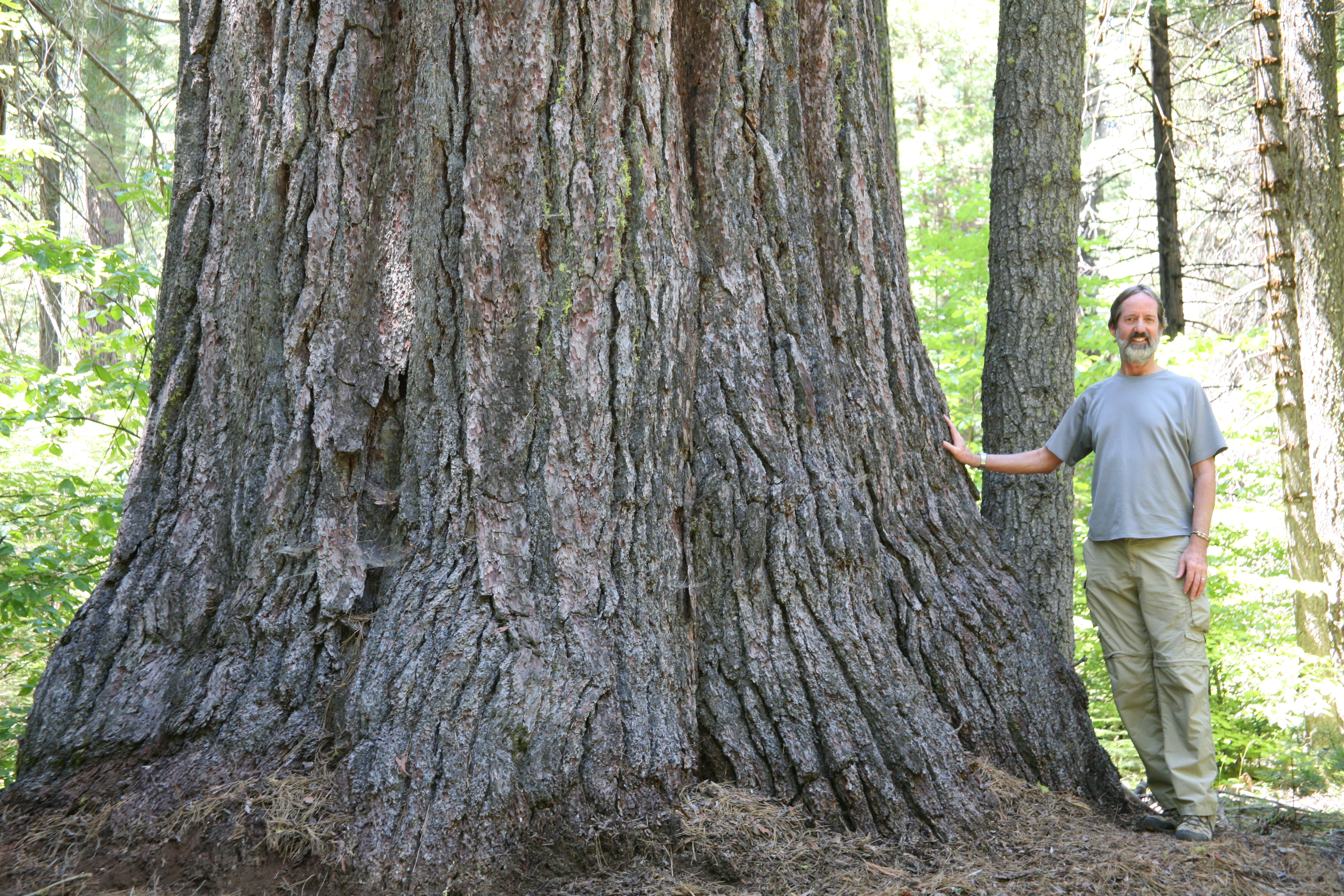 Carl Casey standing next to the base of the sugar pine found in Calaveras Big Trees State Park. Photo by Rick Messier.

I was pushing my way slowly through a dense thicket of small trees – incense cedar, white fir and pacific dogwood — following the sound of voices we heard not far away in the forest. Accompanying me was my good friend and fellow big tree hunter, Rick Messier. We were off trail just upstream from the Agassiz Tree, the largest giant sequoia in Calaveras Big Trees State Park. The Agassiz Tree is in the park’s South Grove, a gorgeous, old-growth mixed conifer forest of the Sierra Nevada that includes sugar pines. The ground was covered with broken branches and occasional logs 2 to 3 feet in diameter. It was a mild summer day in July, with blue skies and temperatures in the low 70s.

After a short distance someone heard us pushing through the forest and yelled out, “Are you looking for Bob Van Pelt?”

Someone came up through the trees and greeted us. It was James Freund, a bright young Ph.D. graduate, who was assisting Bob with measuring sequoias in the permanent plot that had been established in the South Grove five years earlier. He was wearing a hard hat and led us over to the group of researchers nearby that included Steve Sillett and his wife, Marie, well-known for their work with coast redwood trees. Some of the researchers had climbed a group of young sequoias with ropes and were suspended at different heights in the air, measuring trunk and branch sizes.

Bob soon arrived to greet us. Our purpose today was to obtain precise measurements of a large sugar pine I had found in the grove two months earlier. Since the demise of the Pickering Pine and the Whelan Pine, the two largest known sugar pines, the search was on to find another sugar pine close to their stature, if there were any left. The old-growth sugar pines of the Sierra Nevada have been hit hard in recent years by drought, bark beetles and blister rust, and many of the old giants are now gone. Michael Taylor and I had found sugar pines (separately) that are currently co-champions on the National Register of Champion Trees, but both are significantly smaller than the prior champs. Late last summer, Michael and I met and searched for large sugar pines in a nearby area of the Stanislaus National Forest…but came up short.

Bob and James followed me and Rick back to the Agassiz tree. At that point we were back on an established trail and made quick time hiking down to the sugar pine I was hoping would turn out to be in the class of the former giants. When we arrived at the tree, Bob glanced at it and became excited. High up on the trunk was the remnant of a former huge branch, large enough around to indicate that this was a very old tree.

Like many old sugar pines, it had a large, cone-shaped skirt of debris at the base, made up of accumulated bark flakes, needles and small branches. Our first task was to determine where true ground level was on the high and low sides of the tree. Once that was accomplished, James starting wrapping the tape around the reddish-brown bark, while Rick and I assisted by helping to level the tape. After James circled the tree and came back to the starting point, we awaited the reading.

“919 centimeters!” James exclaimed. Bob was wearing a walkie talkie strapped to his chest to communicate with the other researchers. He pushed the button to talk and said, “Steve! It’s 919 centimeters at breast height!”

Not being a scientist, that meant nothing to me. 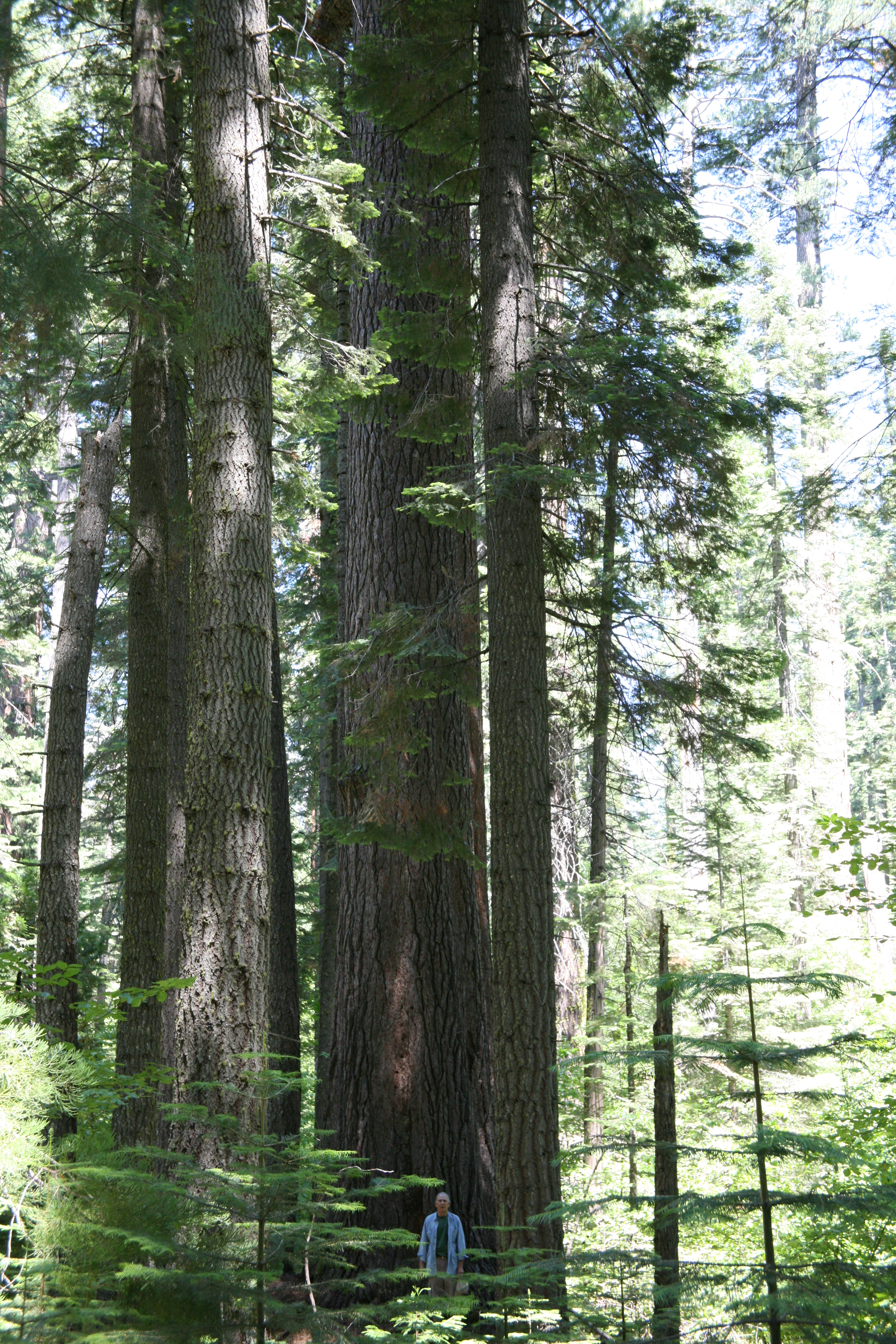 “The circumference is 30 feet and 2 inches in English measures,” Bob said. “That’s 9.6 feet in diameter!” The slow tapering trunk of the tree showed some concave areas of bark that curved slightly as they went upward, another characteristic of large, old sugar pines.

Bob asked James to wrap the tape measure around the trunk as high up as he could reach, standing on top of the debris skirt on the high point of ground. Rick found a stick to push the tape up to keep it level going around the trunk. The tape kept falling and had to be adjusted numerous times. Finally, we got it right.

Bob clicked his walkie talkie and said, “Steve! It’s 762 centimeters (25 feet) at 10 feet off the ground!”  Bob surveyed the trunk with an expert eye honed by 30 years of measuring trees.

After a few moments Bob said with finality, “This is it! I believe this is the largest living pine tree on earth!!”

I was thrilled. My hope of finding one more sugar pine in league with the old giants was fulfilled.

Bob looked up and said, “The tree doesn’t look that tall to me, which could hurt as far as the tree’s overall points are concerned.”

But, I wasn’t too dismayed by this. Most of the really old sugar pines have had their tops broken off at some point and are generally in the 200- to 210-foot height range. Bob wound his way back through the forest, looking for a spot to measure the height with his laser rangefinder. James was standing by the trunk with a reflector, since the understory of pacific dogwood and small white firs obscured the view of the base of the tree.

After numerous attempts to catch the reflector, “Got it!” exclaimed Bob at last.

And then, silence. James tried to hold the reflector still. In a minute we hear Bob yell out, “I was wrong about the height. The tree is 241.3 feet tall!”  This meant the tree garnered more than 600 points in total, a feat accomplished by only three other sugar pines, all of which were now dead.

What caused Bob’s initial height estimate to be low is the fact that the entire forest of   trees in the South Grove is rather tall. The tallest known sequoia north of the Kings River is in this grove, measuring 283 feet high.

Bob came back to the base of the tree. We were all overjoyed that this magnificent old tree had survived centuries of storms, snow, wind, drought, bark beetles and blister rust to eventually, hopefully one day, claim the title of earth’s largest pine.